One of the most exciting things in fantasy football year in and year out is seeing which players bounce back into form. These players could be returning from injury, going to a new team, getting a new coach, or flat out producing better after having a below-average year. In 2020, we saw Zach Ertz go from TE4 to TE31 due to injury and the emergence of Dallas Goedert. In 2021, Ertz would be traded to the Arizona Cardinals where he would become a favorite target and finish the year as TE5. Like any other year, 2022 should have some players bounce back from a poor season in 2021. Let’s take a look at five potential tight end bounceback candidates for 2022.

One of the many moves the Jaguars made so far this offseason was bringing in former 1st-round pick tight end, Evan Engram. Engram has spent the last five seasons on the Giants and has only had one fully healthy season. Otherwise, he has shown flashes of his dominant athletic profile. In 2017, he finished the year as TE5. In 2019, he was averaging 13.7 PPG before a mid-foot sprain ended his season. Even in 2021, Engram had the 3rd highest contested catch rate (66.7 percent) and slot snaps (304) amongst tight ends. He is a talented receiver and is primed for a bounce-back campaign if he remains healthy.

With Daniel Jones as his quarterback, Engram hasn’t ever quite returned to that level. In 2022, he will now have Trevor Lawrence throwing him the ball. Plus, his receiving competition is essentially Christian Kirk, Zay Jones, and Dan Arnold. A bet on Engram in 2022 is a bet on Lawrence and Doug Pederson. Those that take that bet may be rewarded handsomely as Engram can provide TE1 performances for an incredibly low ADP.

In best ball right now where you need to draft 2-3 TEs, I think Evan Engram is the best bet to return huge gains on ADP.

He’s been top 5 with Eli. Was 4th in TE targets and 5th in rec in 2020. Giants have just been last in TDs over the last two years. He could lead that team.

Believe it or not, Hayden Hurst has one top 10 finish in his career. In his only season as the de facto #1 TE on a roster, Hurst finished as the TE10 in 2020 with the Falcons. Then they drafted Kyle Pitts and he was moved down the roster on an already bad offense. Hurst is getting one more chance to prove he was worth his 1st round pick in 2018 with the Cincinnati Bengals. The Bengals just moved on from C.J. Uzomah and are bringing Hurst in to replace him. Their profiles are shockingly similar, so hopefully, Hurst’s floor is Uzomah’s TE19 finish in 2021.

One of the big things to look for in fantasy football is a player’s respective offense. If you’re looking to have a hand in the Bengals’ offense, Hurst is a solid cheap option. He has the potential to be a TE1 with a TE2 floor. With Ja’Marr Chase, Tee Higgins, and Tyler Boyd needing to be watched- Hurst should frequently be open. In Uzomah’s two playoff games before getting injured, he scored 18.4 and 14.1 points across 14 total targets. Hurst should see plenty of volume in 2022. 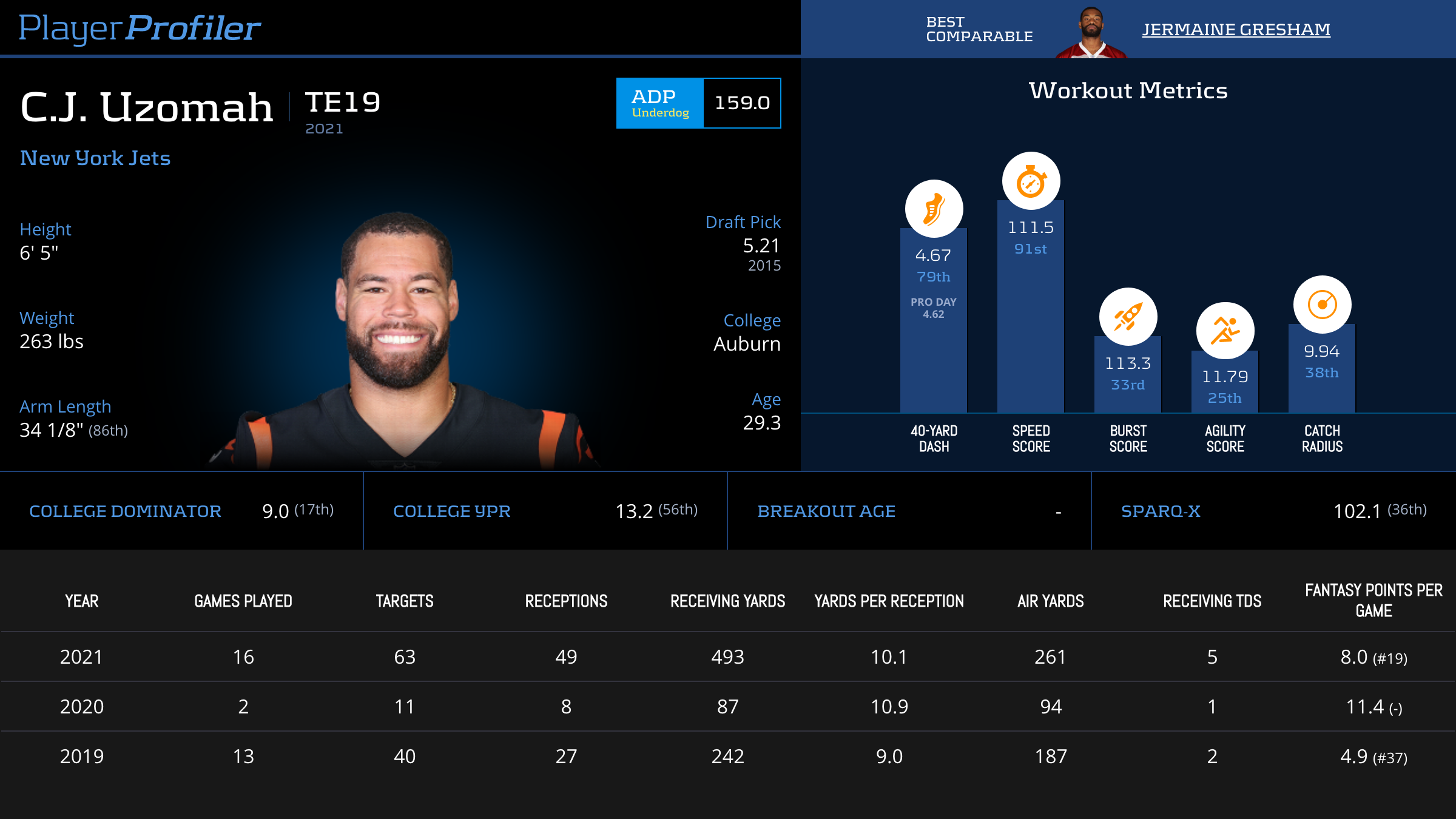 Robert Tonyan has a legitimate claim to be Aaron Rodger’s favorite target in 2022 with Davante Adams going to Oakland. In 2020, Tonyan tied with Travis Kelce for most touchdowns among tight ends. He scored 11 touchdowns, which is two more than Mark Andrews had in 2021. That was in a season that Adams scored 18 touchdowns as well. Now that he’s gone, Rodgers should look to rekindle the connection that was lost in 2021 when Tonyan tore his ACL. If Tonyan returns to form and remains healthy, 2022 should be a great bounce-back year for him.

There’s no telling which wide receiver breaks out for the Packers next season among Allen Lazard, Sammy Watkins, Randall Cobb, and Christian Watson. We all know which tight end will be used and that’s Tonyan. In 2020, Tonyan was first among tight ends in total touchdowns, catch rate, true catch rate, target separation, QB rating per target, and fantasy points per target. Just like the past two tight ends, Tonyan provides excellent value at his ADP.

And if Tonyan can come back healthy and be even close to what he was, that helps tremendously.

T.J. Hockenson finished the 2020 season as TE5. In 2021, Hockenson had some flashes but couldn’t stay healthy. He had season-ending thumb surgery and should return to form in 2022. Some receivers that have broken their thumb and returned to form are Brandin Cooks, Calvin Johnson, and Julian Edelman. So, he should be fine in that department. If he does stay healthy in 2022, he will find himself in a situation where defenses may not be able to cover him.

There are capable targets in Detroit with Amon-Ra St. Brown, D’Andre Swift, D.J. Chark, and now Jameson Williams. Defenses will have their hands full in 2022 as Jared Goff should also take a step forward next year in his 2nd year on the team. Look for Hockenson to be the primary red zone target on a potentially potent offense. Over the past two seasons, his target share has gone up in the red zone. He also had the highest contested catch rate among tight ends last season with 73.3 percent. He has a great profile and was selected eighth overall in the 2019 draft- which shows his ceiling.

In 2019, Darren Waller was the TE3. In 2020, he was the TE2. Then injuries struck in 2021 and Waller finished as TE17. Before the injury, he was averaging 12.1 PPG and already had 665 receiving yards. He is 6’6″, 255 pounds with a 100th percentile 40-yard dash and speed score as well as a 96th percentile catch radius. He is going to be 30 years old next season, but he is still one of, if not, the best athletes at the tight end position. And now he’s in a similar situation to Hockenson where defenses can’t completely hone in on him. The Raiders traded for Davante Adams and Hunter Renfrow broke out last season. If Waller can remain healthy, 2022 will be an excellent season for him.

In regards to the Raiders having too many targets- Waller will get his. In 2020, he had a 28.7% target share that went up to 34.8% in the redzone when he finished as TE2. But when he finished as TE3 in 2019, he only had a 23.8% target share that went down to 17.5% in the redzone. So he doesn’t necessarily need nearly a 30% target share to succeed. Also, the new head coach is Josh McDaniels who loved to utilize tight ends in his time in New England. Waller should still see plenty of volume while also being on an efficient offense.