Don’t Be Cold As Matty Ice

With the Bucs expected to beat up on the Falcons, Matt Ryan could be forced to play catch-up. While Ryan has been a frustrating fantasy quarterback this season, he has flashed upside in the right matchups.

The Bucs tend to pressure opposing teams into passing by running up the score. Since opposing offenses have mostly abandoned the run, the Bucs are allowing a league-high 71-percent Pass Percentage. They also allow a 75-percent (No. 3) Passing TD Percentage. Ryan himself is inexpensive ($5,600) and his counterparts are as well (Kyle Pitts at $5,600 and Russell Gage at $5,300). Paying down for Ryan gives you a great way to approach the game ranked No. 3 in Pace of Play.

Another salary saver worth your consideration is the Football Team’s Taylor Heinicke: priced at just $5,600. The young journeyman has quietly posted some tournament suitable games in five out of 11 starts. Although the offense is clearly more focused on running the ball as of late, it wouldn’t take much for Heinicke to have a ceiling game given his basement price. The Football Team’s coaches would be wise not to run Antonio Gibson into the ground (although I admittedly have some interest in Gibson), especially after seeing J.D. McKissic carted off. Expect the Football Team to attack the Raiders more through the air as they rank No. 30 against the pass.

Without any hesitation, it’s time to go back to the well with Tom Brady. An unexpected Leonard Fournette rumbling left any Bucs skill position player in the dust for Week 12 fantasy purposes. This week, however, expect a shift back to the more pass-centric offense we’ve been more accustomed to seeing.

WIDE OPEN. @TomBrady connects with @cyrilgraysonjr for a 50-yard TD to give Tampa the lead!

There are a lot of reasons to back Brady this week. The Bucs have the No. 1 passing offense and will face a Falcons defense ranked No. 2 in aFPA to quarterbacks. If we dig deeper though, there’s more to the story. The Bucs’ offensive line strengths match up great where the Falcons are most vulnerable. The Falcons have been abysmal in quarterback pressure resulting in a lowly 3.55-percent Sack Rate and 25-percent Pressure Percentage (both league-worst). The Bucs, on the other hand, rank No. 1 in these categories. Brady will be operating with a clean pocket with all day to make his reads. The Bucs (again) have a slate-high team total over 30 points. 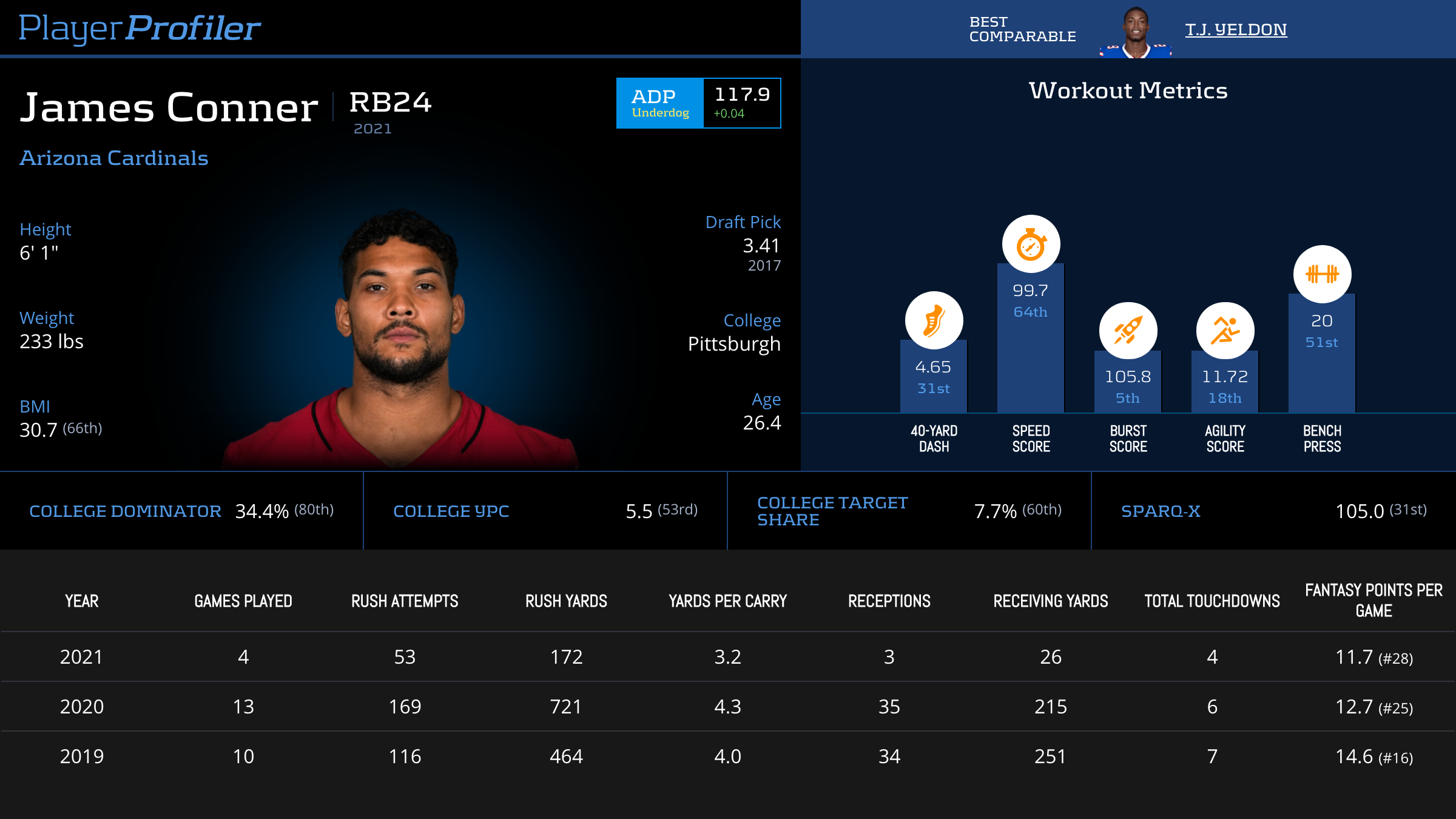 Conner was averaging a 42-percent Snap Share in splits with Edmonds (Weeks 1-8) which ballooned up to 80-percent without Edmonds. Before the Edmonds injury, Conner’s value was mostly tethered to his touchdown production. Now he’s getting the Edmonds passing role in addition to that familiar goal line work. Conner’s 13 (No. 3) Carries Inside the 5 and 13 (No. 3) Total Touchdowns makes his $5,900 salary worth chasing the touchdowns.

While going back to the well with Jalen Hurts is fine, especially after burning the public in Week 12 (myself included), my first read is to look to Miles Sanders. He has turned in a couple of subpar outings, even splitting carries with Boston Scott at times, but the opportunity remains against a suspect defense in the Jets. No matchup is better for Sanders with the Jets allowing the most fantasy points to opposing rushers (No. 1 in aFPA to running backs). Although there’s some valid worry with his ankle injury and Scott siphoning carries, I’m playing him with confidence. His 51-percent Opportunity Share is more than double that of Scott’s.

Jamaal Williams looks to be the last man standing in Detroit with D’Andre Swift expected to miss multiple games with a shoulder injury. Williams, who’s already known for his passing-down chops, should have no problem seeing more work. With the Lions being a team mostly devoid of offensive talent, expect Williams to slide right into the Swift role. Offenses have had success running on the Vikings. They rank No. 3 or worse in Rushing Yards (1,478), Rushing Success (58-percent) and EPA per Rush (16.88). Williams will be chalky at his $5,400 price tag, but this is a spot to buy.

With Allen Robinson (listed as doubtful) still nursing a hamstring injury, Darnell Mooney could see another week of high usage for the Bears. Not only has he led the team in targets and receiving yards in the wake of Robinson’s injury, he has peaked 20 DraftKings points in three straight contests. His 30-percent Target Share and 285 receiving yards pace the team in this sample. 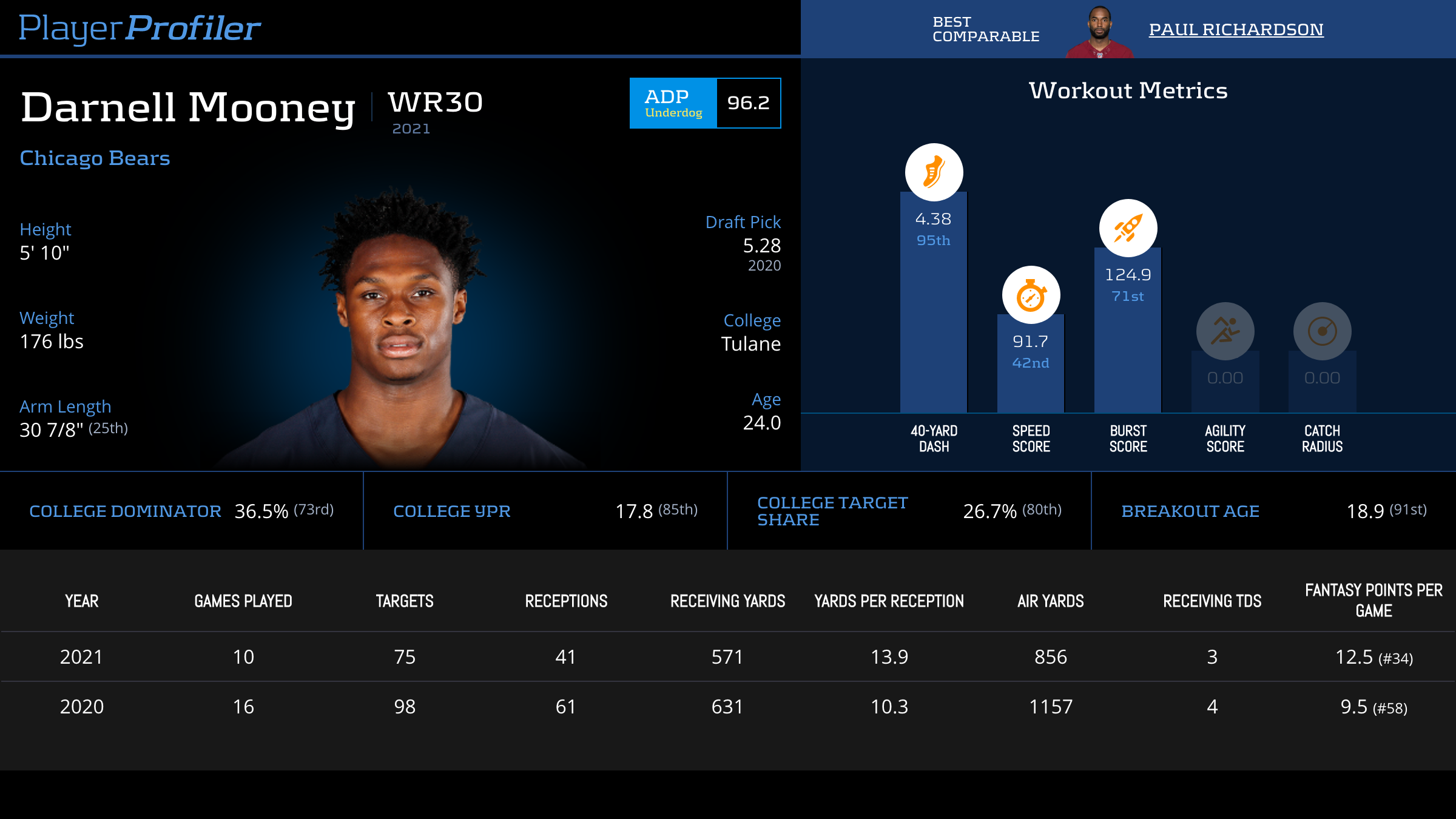 Although the Cardinals have the No. 3-ranked pass defense, Mooney’s role and $5,600 price tag is enough to overcome that.

With the Raiders allowing the No. 7 most fantasy points to opposing wide receivers over the past four weeks, Terry McLaurin makes for a nice tournament play. McLaurin has been volatile in his fantasy output with five games of 10 DraftKings points or lower, and three over 28 DKPt. Embracing the volatility is always key in crafting tournament lineups. McLaurin’s upside is evident in his 45-percent (No. 1) Air Yards Share and 2.0 (No. 4) Deep Targets Per Game. Run him with a skinny stack or add in Antonio Gibson with a Hunter Renfrow runback if you’re feeling frisky.

Week 12 was the Adam Thielen show, but Justin Jefferson looks to be the Vikings wide receiver to target in Week 13. Jefferson failed to reach 100 yards receiving after doing so in back-to-back weeks. The silver lining is he still saw a team-high nine targets. The Lions have a reputation for being bad against the run, but can also be had over the top. They have had a tough time getting pressure on the quarterback (29-percent) which has resulted in 40 explosive plays (20-plus yards), which ranks No. 7. This is good news for the Vikings, who have only allowed sacks at a 3.0-percent (No. 2) clip.

So we have a scenario where Cousins should have time to take some shots downfield. This is Jefferson’s wheelhouse. Jefferson’s downfield prowess is evidenced by his 111 (No. 2) Air Yards Per Game and 2.0 (No. 4) Deep Targets Per Game. Stacking Cousins/Jefferson with a Jamaal Williams runback makes a lot of sense given the likely Game Script.

With Darren Waller listed doubtful with a variety of injuries, the public will be drawn to Foster Moreau. A leverage play tight-end from the same game is the Football Team’s Logan Thomas. After missing a chunk of the season rehabbing a hamstring injury, Thomas was thrust back into a near every-down role, playing 79-percent of the snaps in his first game back. In games he’s started, he averages an elite 20.9-percent Air Yards Share (31.3-percent in Week 12). He makes a great low-rostered pairing with Taylor Heinicke with the Raiders having been had by opposing tight ends, ranking No. 5 in aFPA. 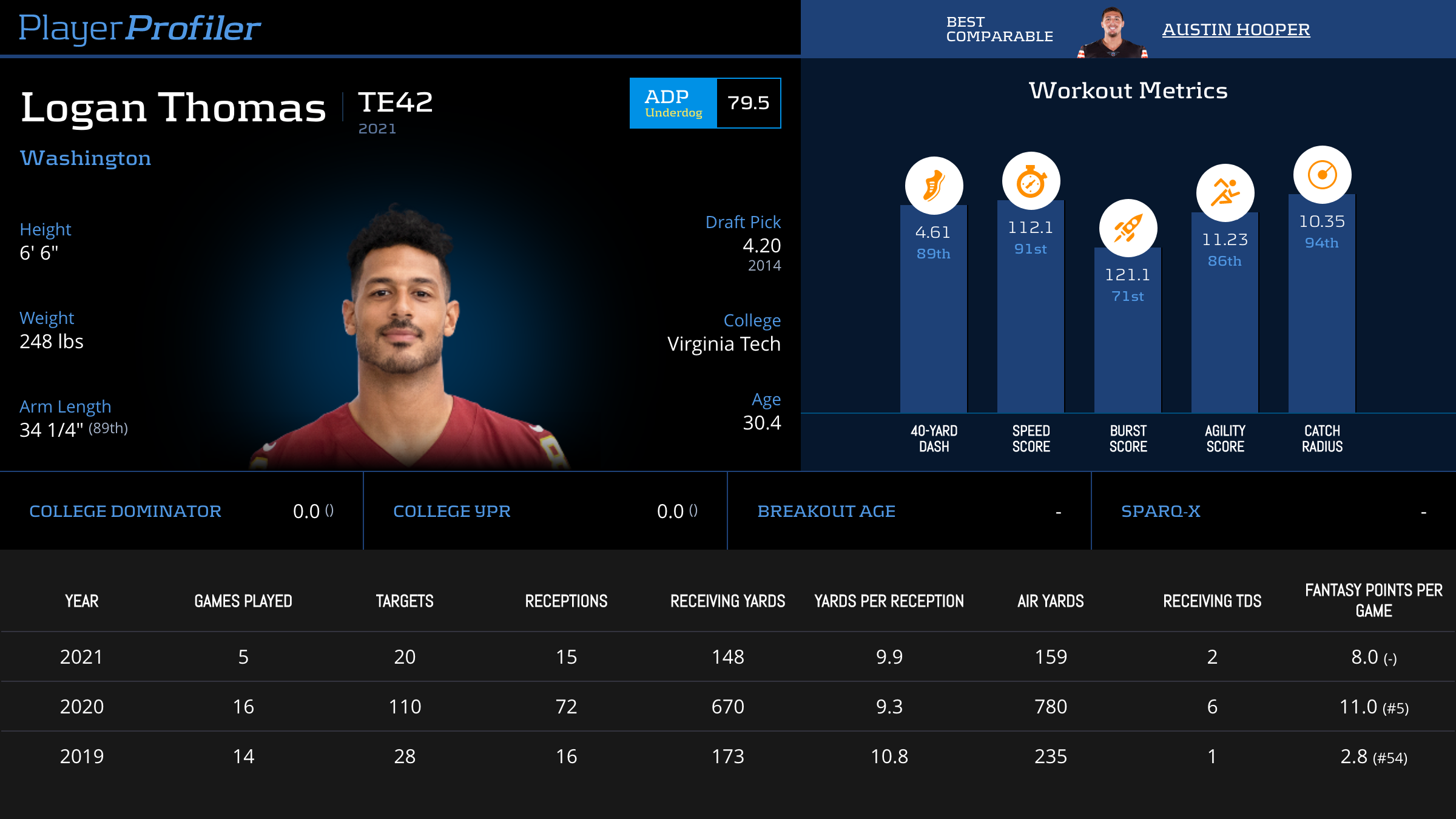 Rostering Dallas Goedert in Week 12 was a good way to burn up your bankroll. Dusting fantasy gamers with one catch for zero yards, it was frustrating to say the least. Though there’s a good chance for redemption in a matchup with the Jets. The Eagles’ 25.75 team total is high-ish and the Jets, while leaky all around, have allowed the No. 11 aFPA to opposing tight ends.