Trade deadlines have passed in the majority of dynasty leagues. Managers are either headed for the fantasy playoffs (congrats), fighting for a final spot (best of luck), or have turned their attention to 2022 (condolences). Whatever the situation is, stay in touch with the market. The weekly Dynasty Market Report is here to provide insight into the risers and fallers on PlayerProfiler’s always up-to-date dynasty rankings.

Mac Jones is the odds-on favorite to win NFL Offensive Rookie of the Year and has led the Patriots to six straight wins. Only 12 games into his NFL career, Jones has been sharp with a 7.9 (No. 7 among qualified quarterbacks) Accuracy Rating, a 73.6-percent (No. 7) True Completion Percentage, and a 93.6 (No. 16) True Passer Rating.

In fantasy, the Patriots’ offensive approach has capped Jones’ ceiling. New England averages 32.6 (No. 23) Team Pass Plays Per Game and enjoys positive Game Script (+2.86, No. 5). There are positive signs, however. Jones has a Top 10 fantasy performance in two of the last three weeks. He threw for a season high 310 yards in Week 12 and has averaged 8.5 Yards per Attempt over the last four games. This is drastically improved on his 6.4 YPA from Weeks 1-4. “MJ10” earns a position best 9.92 Lifetime Value points to ascend to QB13 in dynasty.

The dynamic Elijah Mitchell has battled injuries, but when he’s available, he’s been involved. Mitchell has 27 carries (2 red zone) in each of the last two games. On the season, he has a 76.3-percent (No. 6) Opportunity Share.

Jaylen Waddle broke out in a big way versus the Carolina Panthers in Week 12. The sixth overall pick in the 2021 NFL draft registered 137 receiving yards and a touchdown on nine receptions (10 targets). His first professional 100-plus yard receiving day handed fantasy managers a 28.7 fantasy point performance (WR1).

Waddle leading the NFL in Routes Run as a rookie is also B-A-N-A-N-A-S🍌🍌 pic.twitter.com/lL4soFAN7w

On the year, Waddle has 105 (No. 7) targets, which leads all rookie wideouts. His 15.1 Fantasy Points per Game trails only Ja’Marr Chase in terms of rookie WR production. Overall, Waddle is the WR19 on a points per game basis. Establishing himself as Miami’s alpha receiver, Waddle has scored double digit fantasy points in six of the last seven games. His dynasty stock gains 18.28 Lifetime Value points to join the Top 20 WRs in dynasty (WR19).

Shortly after being profiled as a market riser in Week 3, Dawson Knox‘s dynasty stock took a temporary hit due to a fractured hand. The good news is that Knox is now healthy, he’s back to producing, and his dynasty stock has climbed higher. The Bills’ TE gains 11.63 Lifetime Value points (the most of any TE this update) to vault to TE12 on PlayerProfiler’s dynasty rankings.

In Week 12 versus the Buffalo Bills, Trevor Siemian threw 29 times for 163 yards and a touchdown. The end result was a 31-6 defeat, marking the fourth consecutive loss for the Siemian-led Saints. From a fantasy perspective, he posted back-to-back QB4 performances prior to this contest, however that doesn’t help Sean Payton win football games.

Benched in favor of  QB/RB/WR/TE Taysom Hill for Week 13, Siemian has 1,083 (No. 34) passing yards and nine (No. 28) passing touchdowns in five games. His metrics don’t exactly jump off the page with 6.2 (No. 23) Adjusted Yards per Attempt and a 61.5-percent (No. 36) True Completion Percentage. It’s extremely difficult to score fantasy points from the sideline, Siemian loses 11 spots to drop to QB49.

Since returning from an ankle sprain sustained in Week 5, Saquon Barkley has been used sparingly. In Week 12, Barkley logged an 82.1-percent Snap Share and carried the ball 13 times. He hauled in five of six targets for 53 total yards. Although he doubled his carry count from the previous week, his yardage output was nearly identical.

From a fantasy standpoint, Barkley has produced as a back-end RB2 this season (12.2 Fantasy Points per Game, RB26). He has an underwhelming 4.5 (No. 42) Yards Per Touch average and has been hampered by poor Run Blocking Efficiency (-12.0, No. 69). Barkley’s talent is evident, but his ability to stay healthy has been questionable. It may be 2022 until fantasy managers once again get the full Saquon experience last seen in 2018. His dynasty stock loses 8.55 Lifetime Value points to fall outside of the Top 5 (RB6).

Terrace Marshall was a healthy scratch versus the Dolphins in Week 12 – 2021 sixth round wideout Shi Smith was active. While Marshall hasn’t been productive in his rookie season, this is not the news that dynasty managers were hoping for from the Panthers’ second round selection. In nine games, Marshall has 14 (No. 110) receptions on 26 (No. 106) targets for 116 (No. 130) scoreless yards. He has a 49.1-percent (No. 100) Snap Share. He was out-snapped by Brandon Zylstra in Weeks 10 and 11. 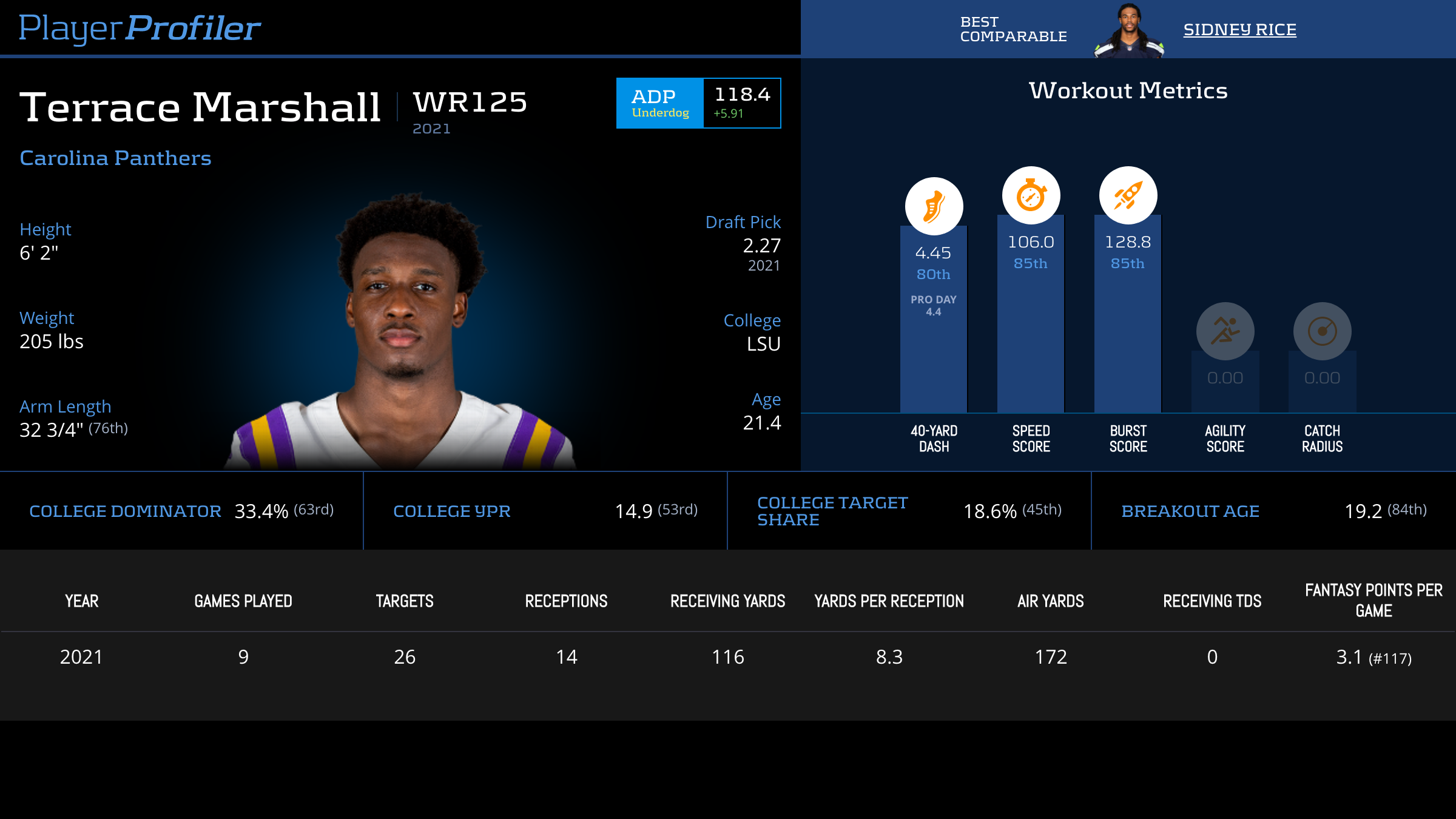 In fantasy football, Marshall is a deep bench or taxi squad stash. His best performance came in Week 3 versus the Texans with four receptions for 48 yards (8.8 fantasy points, No. 53). The former LSU Tiger has averaged a mere 3.1 (No. 117) Fantasy Points per Game. His dynasty stock loses 16.59 Lifetime Value points and six spots to drop to WR44.

In 11 games, Higbee has 56 (No. 11) targets and a solid 82.2-percent (No. 3) Route Participation mark. However, he surpassed 50 receiving yards only twice this year (68 yards in Week 1 and 51 yards in Week 9) and has scored just three times. Despite seeing five or more targets in eight of 11 games, Higbee has averaged 8.3 fantasy points (TE18). The Rams TE loses three spots to drop to a dynasty rank of TE17.