The best value Air Yards play on the week is always scored with a value of 100. All other players are compared against that player with decreasing value. This list is not a mere recitation of where each player is ranked — a simple machine could do that. This list contextualizes each player’s Value Score so as to present the top ten Air Yard values in DFS for the week, focusing on players priced at or below $5,500 on DraftKings.

We will highlight two wide receivers on the Air Yards Value Index priced above $5,500 and then focus on the top ten Air Yards value plays priced at $5,500 or below on DraftKings.

Stefon Diggs melted faces on Monday night torching a Titans secondary for 148 Yards on 14 targets finishing as WR1 in Week 2 with 44.8 fantasy points. Diggs is the WR1 in all of fantasy and is priced $2,200 less than Cooper Kupp. He also has only the No. 5 highest salary on DraftKings.  That does not make sense. Even if Gabriel Davis‘ ankle is well enough for him to return, Diggs will see plenty of opportunity to post another potential WR1 overall week against a Dolphins defense that was recently roasted by the Ravens.

Unlike, Diggs, who won many fantasy contests Monday night, A.J. Brown did not live up to the hype. He posted only 11.9 fantasy points. Still, he led the Eagles in with 108 Air Yards and remains THE focal point of the Eagles passing attack with the highest Air Yards Share in the entire league. Don’t let one down week scare you from starting Brown in all formats.

Two rookies are highlighted on the list despite scoring slightly worse in the model than their veteran counterparts, Mecole Hardman, and Breshad Perriman. (Let’s be real, we know who both Hardman and Perriman are at this point. Both are highly volatile boom-bust receivers with ADOTs of 16.3, and 19.3, respectively, who have accumulated hundreds of Prayer Yards during their time in the league than have resoundingly been unanswered.)

Jahan Dotson as seen at least 70 Air Yards since his week one debut however he is squarely behind teammate Terry McLaurin who has seen 183 Air Yards come his way. He is also behind YAC machine Curtis Samuel (DK: $5,100) in fantasy points per game trailing 18 to  21.1. Much of Dotson’s fantasy production has come as a result of touchdowns of which he has scored three in the past two games. Because of these touchdowns, Dotson’s fantasy production is likely to regress, however at the most modestly priced of the aforementioned trio of Commanders’ receivers, some tepid exposure across all formats is warranted.

Despite a preseason narrative roller coaster ride, Treylon Burks is the Titans’ leading receiver in Targets (11), Air Yards, and Fantasy Points per Game (8.6). Unfortunately, this has not resulted in a huge boon to his fantasy output thus far because his offense, led by Ryan Tannehill‘s 67.0 True Passer Rating (No. 22 among qualified quarterbacks), looks like a dumpster fire. But from the ashes rises a phoenix, and Treylon Burks is just that, rising amongst his other Titan’s receivers in efficiency with a +43.6-percent Target Premium. If the Titans are going to keep pace with the Raiders offense, Burks will likely be heavily targeted. He makes for a fine play across all formats.

Nico Collins reasserted himself as part of the Texans offense last week seeing one less target than Brandin Cooks and “out gaining” the veteran  wide receiver in Air Yards with 127 Air Yards compared to Cooks’ 79. However, Collins only saw three targets in Week 1. This makes his Week 2 usage either an outliner or a sign of things to come. Facing the Bears, in a game with one of the lower projected point totals on the entire slate, it’s probably best to take a wait and see approach with Collins before inserting him into too many lineups. 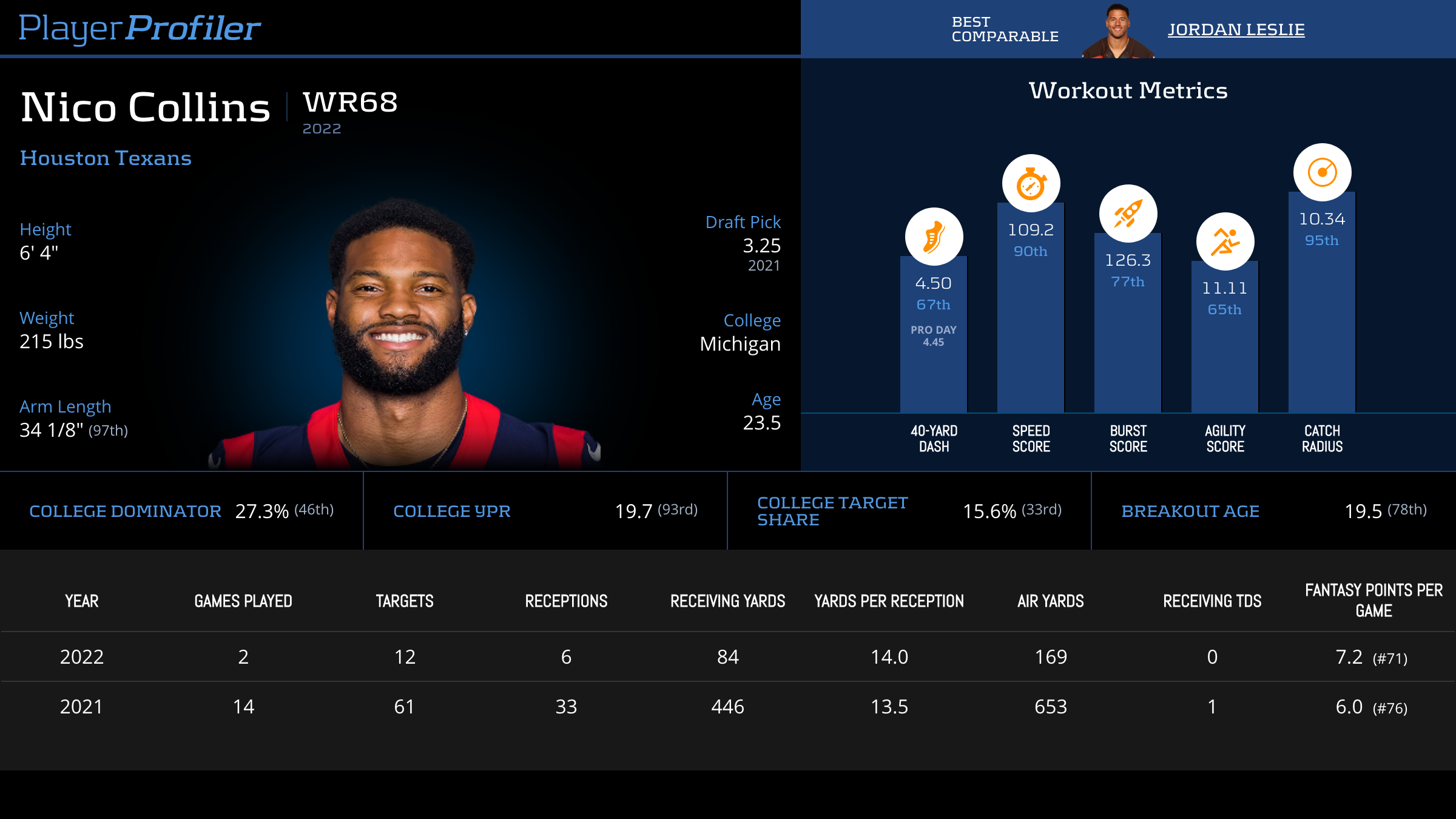 Is it too early for a dance party? Ashton Dulin was the Colts leading receiver last week amassing 79 yards on five receptions scoring 13.2 fantasy points. With both Michael Pittman and Alec Pierce looking likely to return for the Colts Week 3 tilt against the Chiefs, Dulin’s role may be reduced to it’s Week 1 status where he essentially split snaps with Pierce and saw only 37.4-percent of the Colts snaps. Regardless, with an average depth of target 12.7 (No. 25), Dulin will likely see some dep targets from Matt Ryan as the Colts try to play catch up with the Chiefs. Priced at only $3,900, Dulin makes for an affordable run back option for those stacking Chiefs in tournaments.

For the second consecutive week Marvin Jones led the Jaguars in Air Yards seeing 67 Air Yards. He also out targeted Zay Jones and saw only one less target than Christian Kirk. Out of all three receivers, Jones has the highest Average Target Distance of 15.3 yards (No. 13). While Jones faces a tough Chargers secondary in Week 3, the Jags may be forced to air it out in comeback mode. As the Jaguars receiver with the highest ADOT, and only $100 more than Zay Jones, Jones makes for a modestly priced run back option if you’re inclined to stack Justin Herbert and the Chargers.

Jakobi Meyers in cash forever and always. Meyers finished as the WR18 last week seeing a team high 13 targets and 118 Air Yards. He remains the always affordable, high floor, lineup mainstay this week. Squaring off against a Ravens secondary that was torched by the Dolphins last week, Meyers makes for a great cash game play yet again.

D.J. Chark  is coming off the dreaded doughnut in Week 2 despite seeing a team leading 87 Air Yards. The peripheral numbers still look great for Chark who is near the league leaders in Deep Targets with five (No. 3) and seeing a 17.8 ADOT (No. 6). He remains a process over results play this week against the Vikings.

Garrett Wilson led the Jets with 176 Air Yards last week in route to a 30 point fantasy finish in which he saw 14 targets and scored two touchdowns. He still lags behind teammates Corey Davis and Elijah Moore in snaps and routes run but has seen the most targets among Jets receivers. So long as Joe Flacco is the Jets quarterback, Wilson is the receiver you want the most exposure to in all formats. 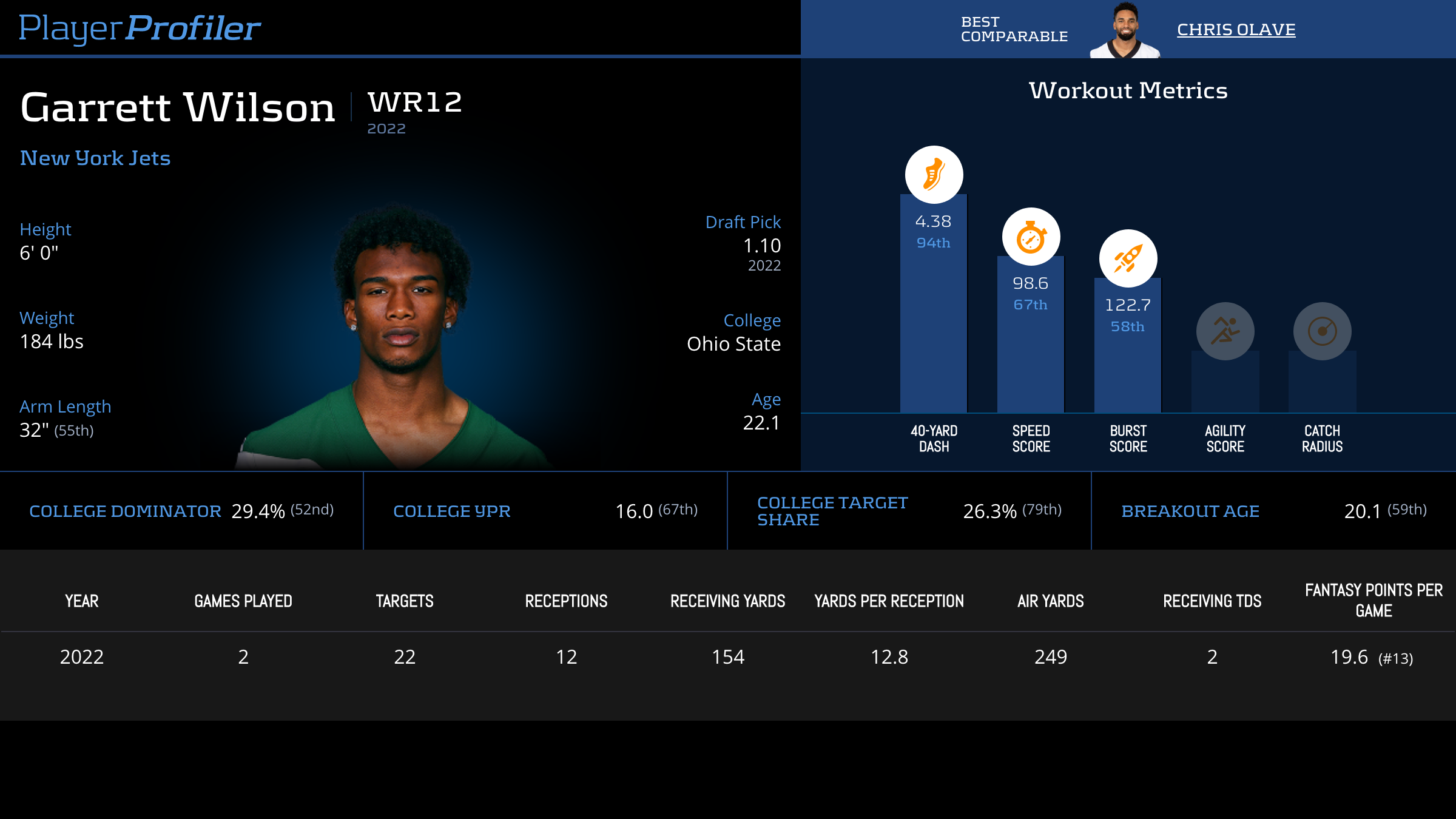 Corey Davis is essentially the less sexier, more volatile version of Garrett Wilson. Davis has seen more Air Yards than Wilson but is used as a farther downfield target for Joe Flacco. He’s seen 20 yards of average target distance (No. 4) compared to Wilson’s 11.3 (No. 32) ADOT. He makes more sense in tournament lineups as a run back option if you need to both be contrarian and save some budget. With 131 unrealized Air Yards, the boom week is now or never with Zach Wilson‘s returning looming as early as next week.

Chris Olave has broken the Air Yards DFS Value List! The difference between Olave’s Air Yards Value Score when compared to the player second on the list is the greatest I have charted in the past three seasons I have written this article. Olave’s Week 2 Air Yards totals are gob-smackingly absurd as he amassed 278 Air Yards and has seen the most Air Yards in the NFL this year. He is a recommended play in all formats after overtaking Jarvis Landry on the Saints depth chart.

Good luck to everyone in Week 3. May all your Air Yards be realized.