Each week, fantasy players question which of their players to insert into lineups and which to bench for that week. A key component in that process is highlighting easy or difficult matchups for players. While an easy matchup does not guarantee a player to have a great performance, it’s certainly a better bet. In this weekly piece, I shine the spotlight on a few different matchups to keep an eye out for as you make your lineup decisions. This is the Matchup Monitor Week 3!

Chicago’s offense has looked disheveled this season, but its run game has shown life. After a lackluster Week 1, David Montgomery scampered for 122 yards in Week 2. Khalil Herbert also has 83 yards on 13 carries through the first two weeks of the season. Both backs display shiftiness and agility in the open field. 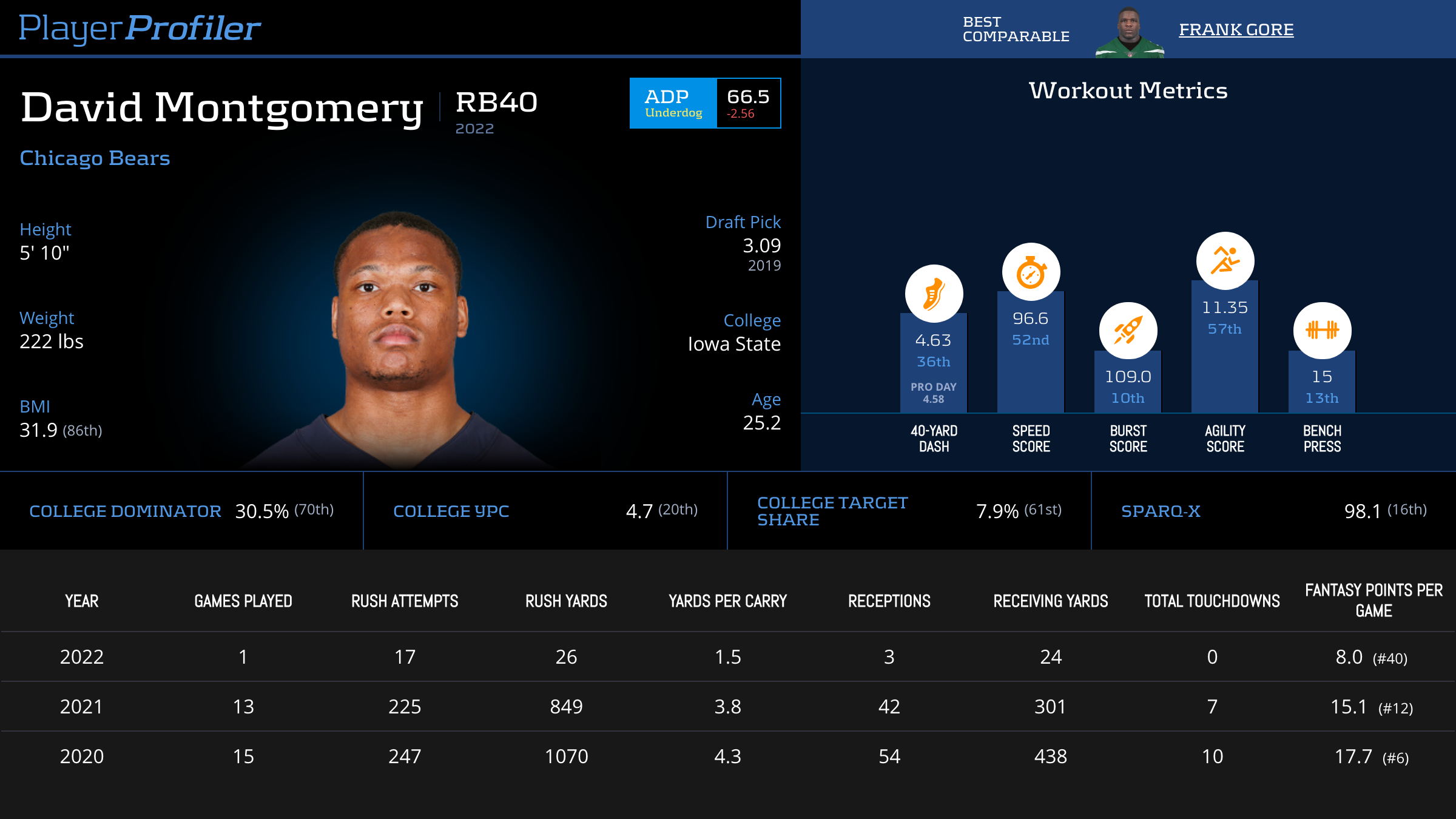 The Texans’ run defense has allowed over 100 yards rushing to its opponents each of the first two weeks of the season. Last season, Houston allowed the No. 3 most RB fantasy points, and the run defense has not improved by much this season. From the first two weeks, it looks as if Justin Fields will have a lower pass volume and attempting shallower passes often. Montgomery and Herbert will see check-downs and a high rush volume in a good matchup against a lacking Texans defense.

The Colts have struggled to start the season as they are winless after facing the Texans and Jaguars the first two weeks. The Colts secondary has allowed four receiving touchdowns and forced no turnovers yet this season. In both weeks, one opposing receiver has clearly commanded the receiving game for their team against Colts. In Week 1 it was Brandin Cooks for Houston, and in Week 2 it was Christian Kirk for Jacksonville. This week, it’ll be JuJu Smith-Schuster. 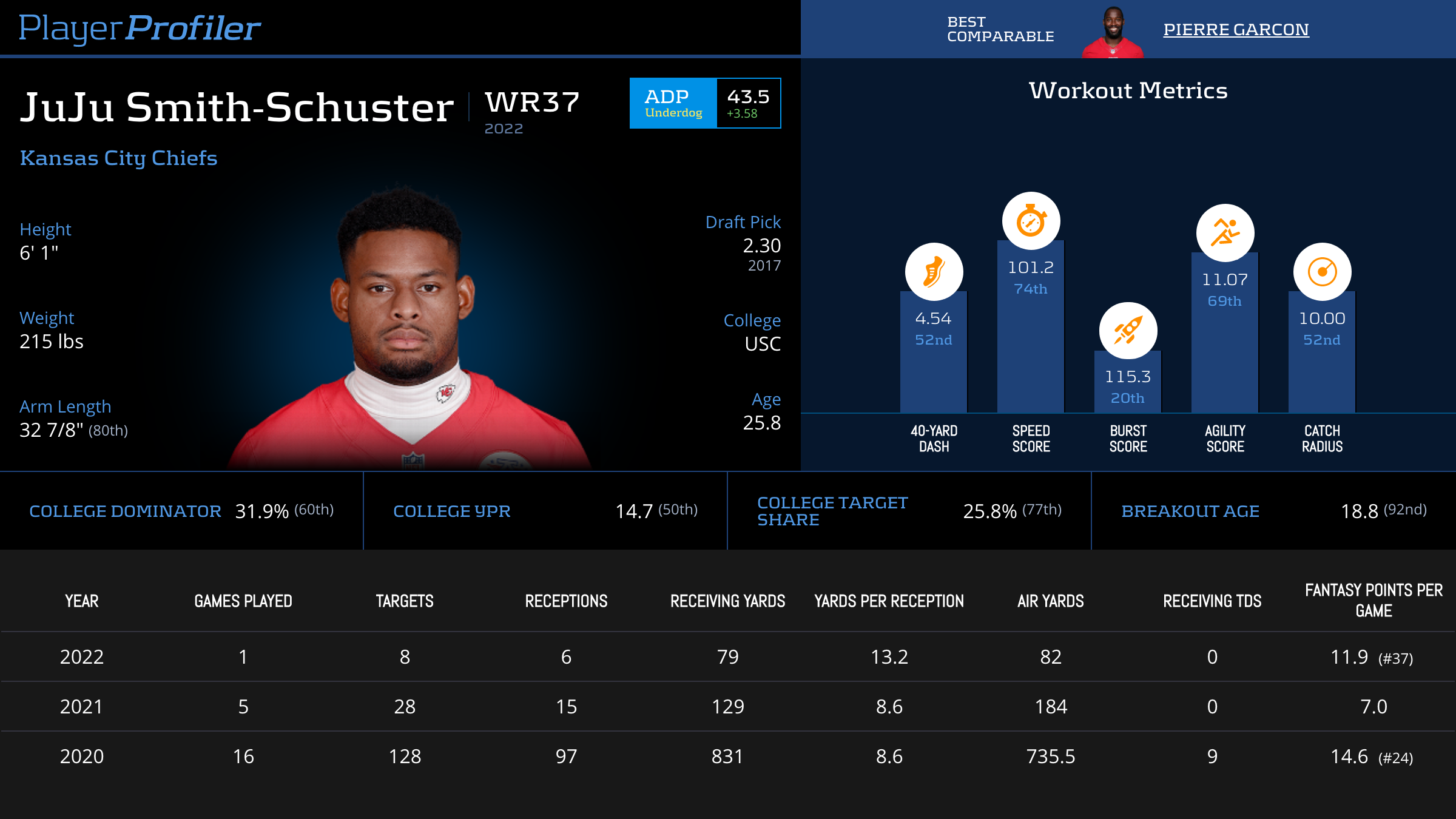 Smith-Schuster put up a dud in Week 2 but saw eight targets in Week 1 for 79 receiving yards. Patrick Mahomes has spread the ball around the Kansas City offense, but Smith-Schuster is the only one with experience as a target hog. With an 80th-percentile Arm Length and a bigger frame than Indy CB Stephon Gilmore and slot CB Kenny Moore, he is an appealing red zone target for Mahomes. Expect a bounce-back game for Smith-Schuster this week.

With Mitch Trubisky at QB, Diontae Johnson has gotten off to a mediocre start. He’s totaled 13 receptions for 112 yards this season. However, Johnson is still getting a high target volume (22 total targets) even if those targets are shallower. 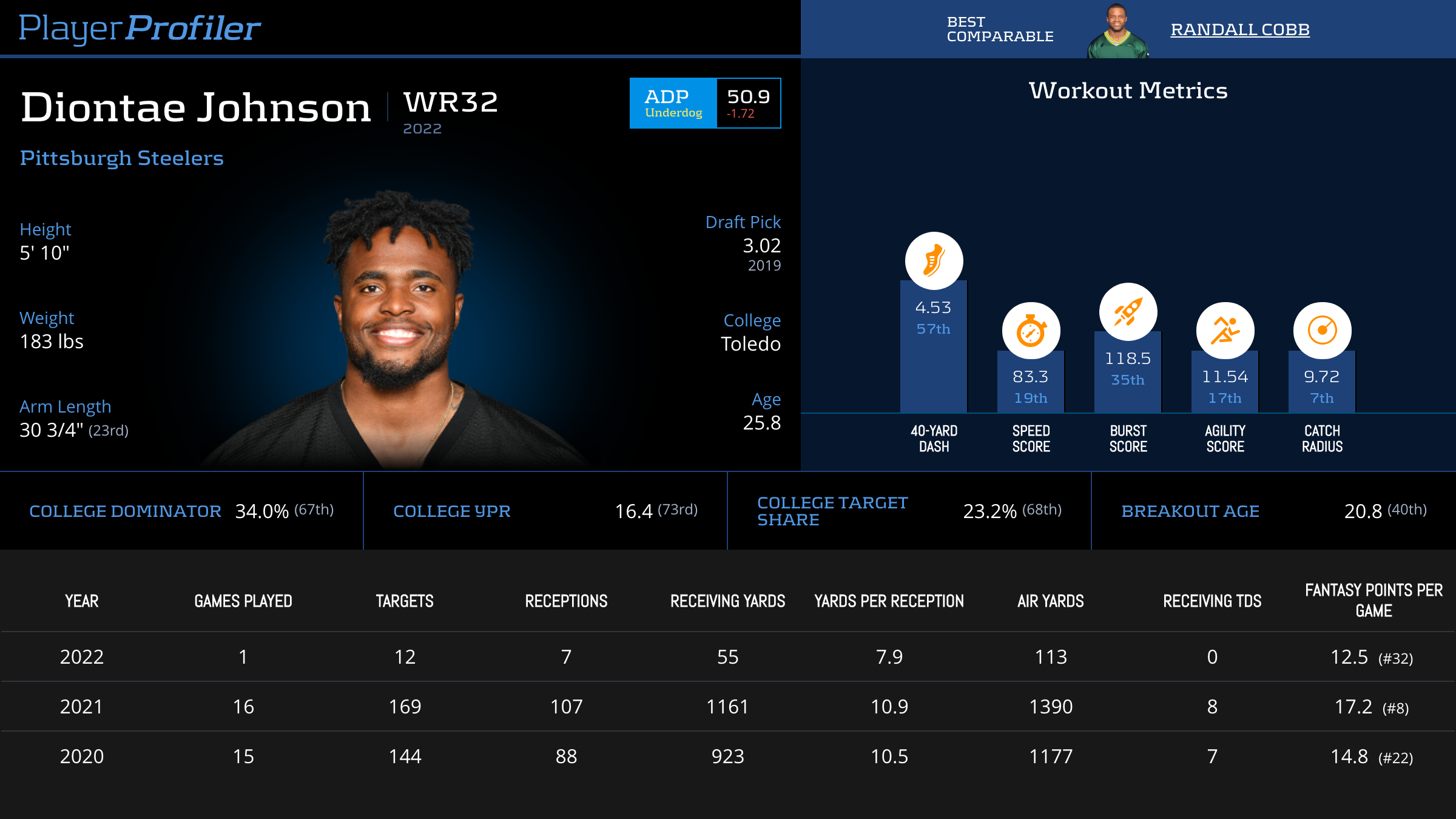 The Browns have allowed 100-yard receivers in each of their first two games along with a Joe Flacco 300-yard passing performance. Opposing receivers have also scored four touchdowns on Cleveland defensive backs. Denzel Ward may be matched up on Johnson, but he has the volume to have a big fantasy day especially with a Joe Woods defense that has shown miscommunications and growing pains in the back of the secondary. The Cleveland defense has struggled against opposing passing offenses, and Johnson is set to take advantage of that with volume and talent.

HOW DID DIONTAE JOHNSON CATCH THIS? 🤯

The Baltimore running game, once a strength of the team, has faltered this season. Ravens running backs have 82 total rushing yards on the season with J.K. Dobbins and Gus Edwards still out due to injury. Kenyan Drake has led in carries, but he has averaged less than three yards per carry. Dobbins may return this week, but it will be hard to trust him with an offensive line that has been poor in run blocking. 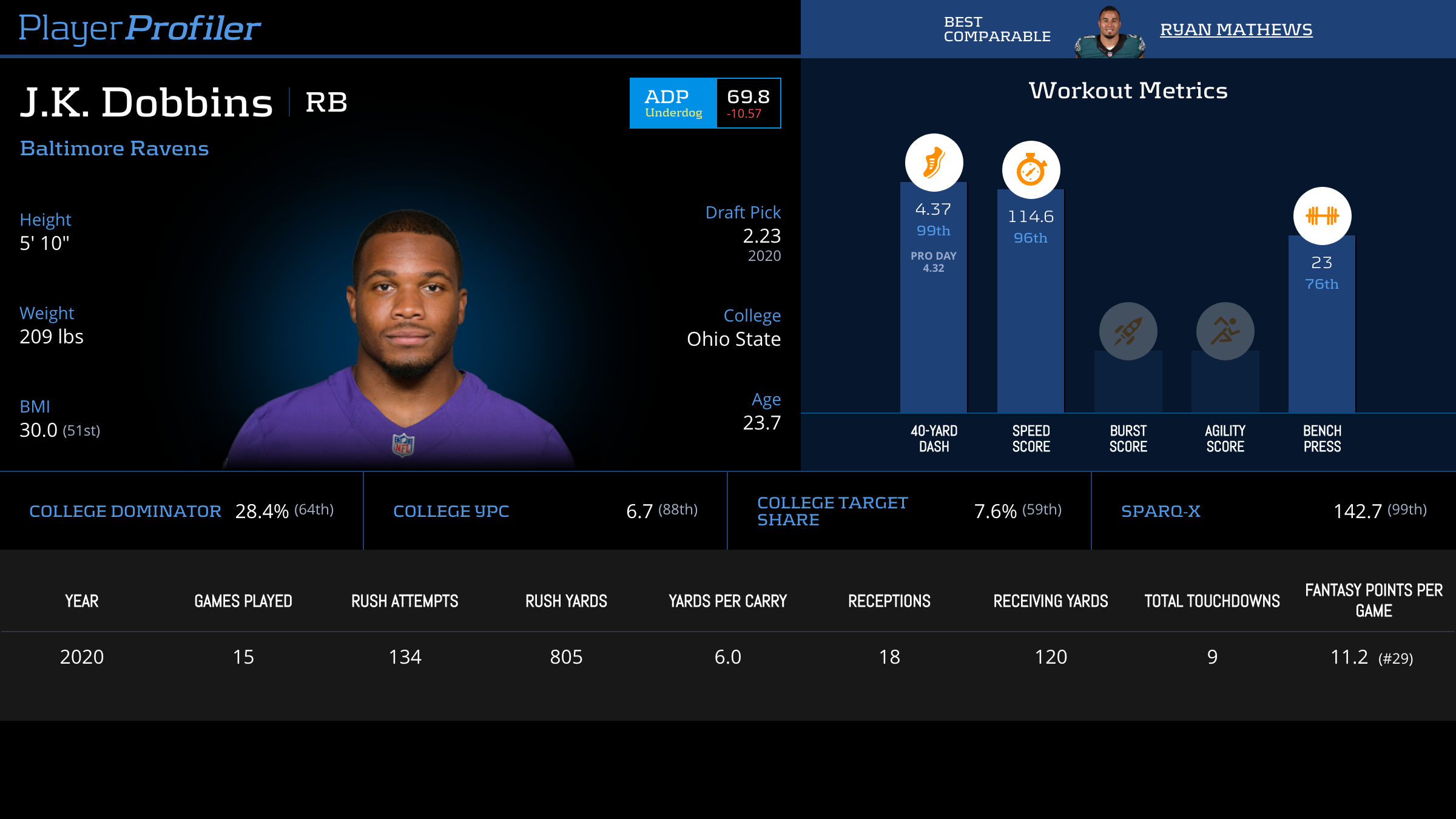 The Patriots defense has not yet allowed 100 yards rushing to an opponent either week this season. They have held opposing RBs to less than four yards per carry with a big defensive line that has been better than expected. With a struggling run blocking offensive line facing a solid defensive line, it is a good idea to avoid Raven RBs this week.

The TE position may seem dry, but Albert Okwuegbunam is a no go this week. You may still want to play him after a Week 2 dud, but we could see that dud more than we see a mediocre usage like his Week 1 line. The Broncos are using several different tight ends while the offense overall has struggled to get going. 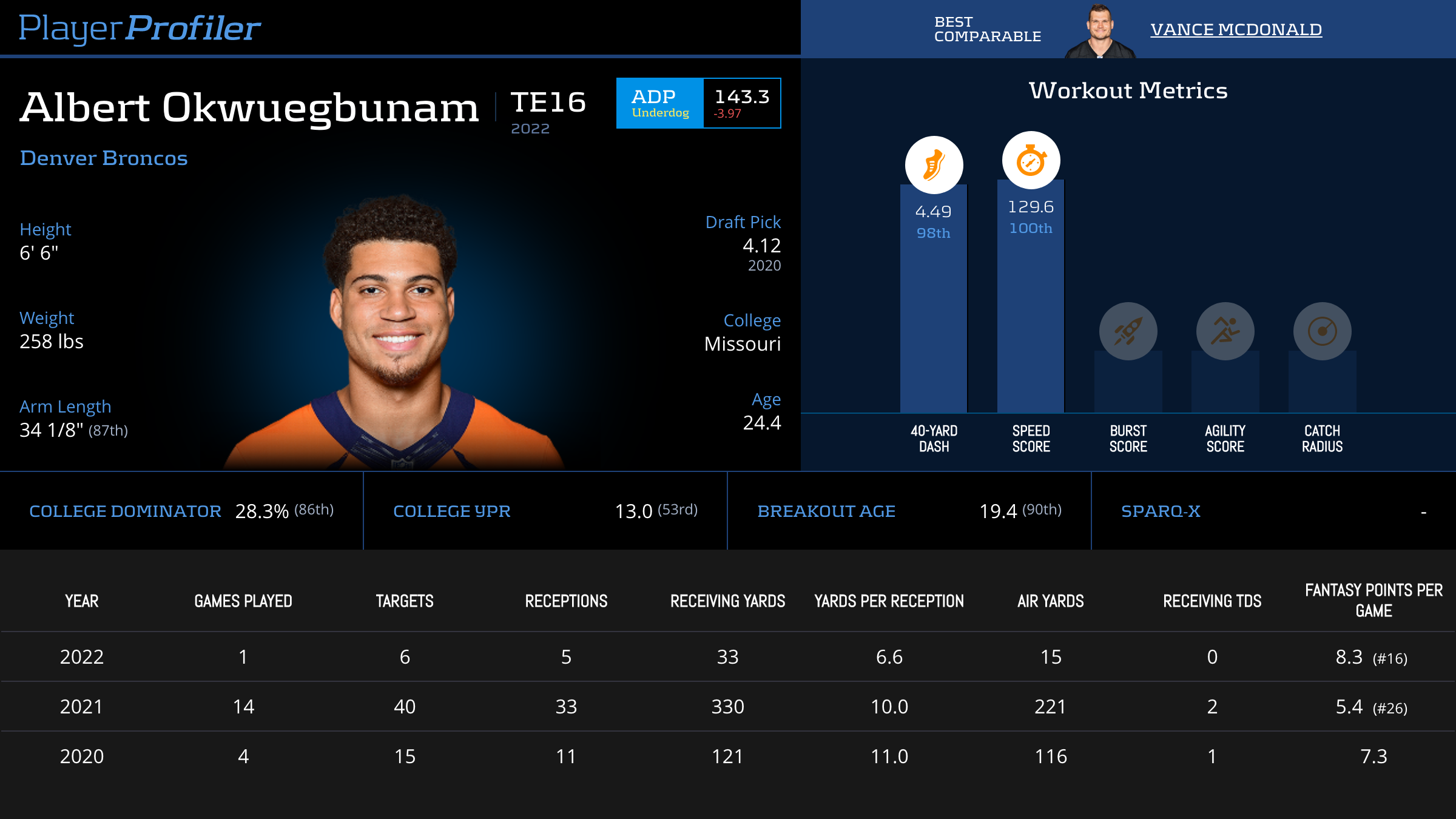 San Francisco allowed the No. 26 most fantasy points to TEs in 2021, yielding just four receptions to TEs this season so far. The LB corps and safeties, headlined by Fred Warner and Talanoa Hufanga, have been good in coverage and will give the Broncos a hard time over the middle of the field. In the midst of a struggling offense, tight end rotation, and facing a good TE coverage defense, Okwuegbunam is in a tough bind this week.

A pass catcher on the sideline opposite of Okwuegbunam, Brandon Aiyuk, is facing a challenging task as well in Week 3. Now with Jimmy Garoppolo at QB, Aiyuk may have a better chance at valuable receptions after seeing eight targets in Week 2. However, Deebo Samuel is still the No. 1, and George Kittle is eyeing a return. 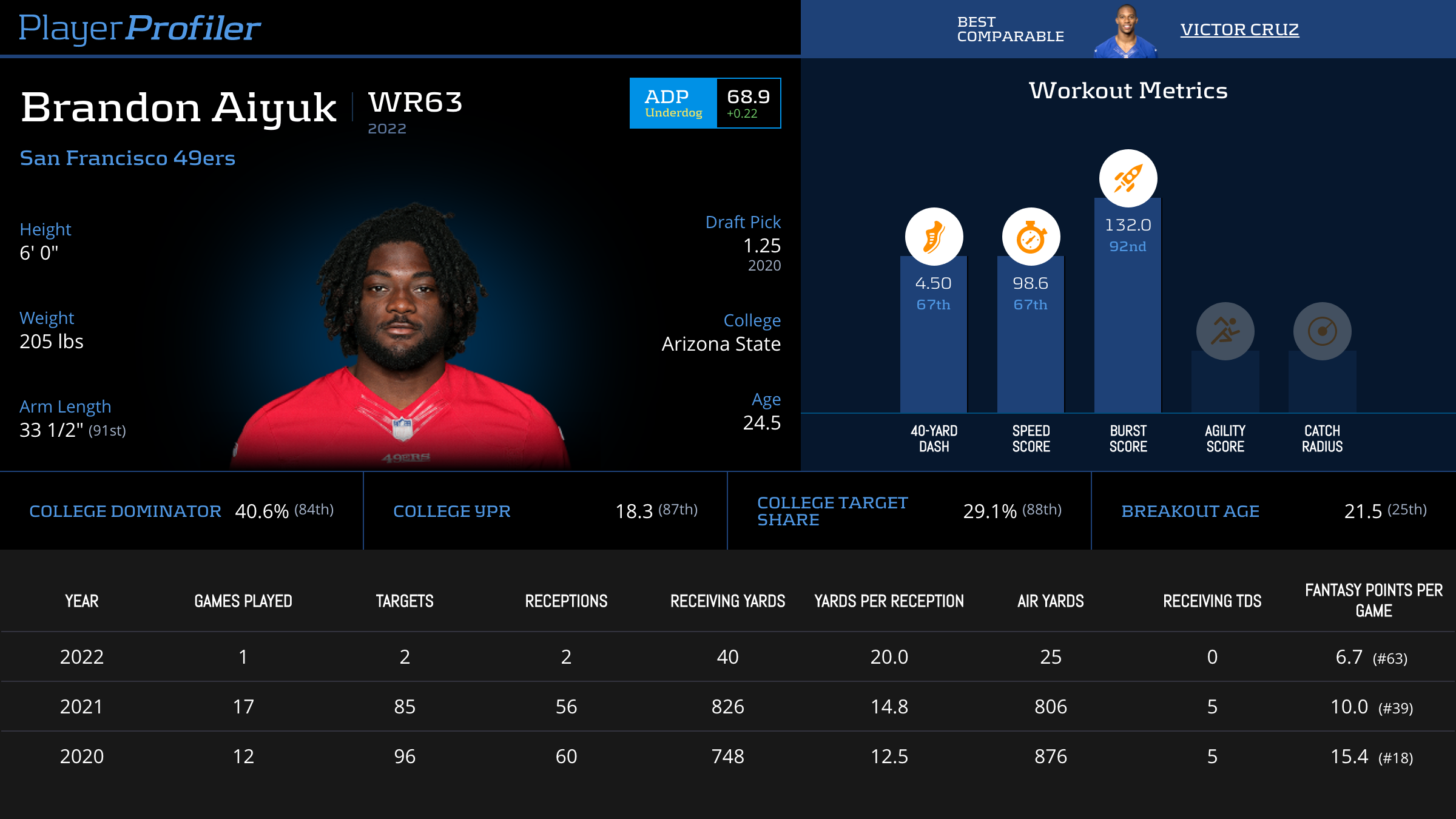 The Broncos gave up the No. 24-most fantasy points to WRs in 2021 and have not allowed over 200 passing yards in either of their games this season. Patrick Surtain is hurt, but possible to play, while Ronald Darby and K’Waun Williams have been solid in their own right. Facing a tough secondary, Aiyuk has a difficult matchup this week.