The NFL Draft is over, most free agents have been signed, and trades have been made. Barring any more major trades, we now know what each team will be working with in 2022. Before we move completely onto the next year, it is important to remember what players and teams found success in 2021. After all, a player’s fantasy success is largely tied to their team’s success. This series will serve to function as a reminder of last year’s performances and also take a look at who may breakout in 2022. Each division will have its teams dissected and I will find a player who should be a more valuable asset in 2022 than they were in 2021. Every relevant player leaving, every relevant player coming, and every draft pick is here. So without further ado, let’s take the AFC West Divisional Dive.

At least one of the new receivers in Kansas City has to have a great season next year. Skyy Moore makes the most sense. The Chiefs spent their second rounder on him and he is the closest to Tyreek Hill out of the rest of the guys. Moore demonstrated his explosiveness last year at Western Michigan by taking 94 catches for 1,283 yards and 10 TDs. He is excellent after the catch and the Chiefs will look to use him like they used Tyreek Hill, by letting him run short routes and taking advantage of his YAC ability.

The Podfather has Moore’s floor at Golden Tate, who was a very consistent fantasy WR for eight years. Kansas City was an excellent landing spot, and hopefully he is given the opportunity to succeed.

In 2021, Derek Carr threw for 4,804 yards, No. 5 in the league. Now the Raiders traded for Davante Adams, and Darren Waller will be back in action. They also brought in Patriots offensive coordinator Josh McDaniels, to be the new head coach. McDaniels should hopefully make the offense more efficient. Even without that, the receiving corps of Davante Adams, Hunter Renfrow, and Darren Waller is nothing to scoff at. Carr has all the weapons he could need, and an offensive mind calling the plays. Anything less than a QB1 performance would be surprising in 2022.

I ranked Gerald Everett as the 10th best free agent going somewhere new in 2022. The Chargers is an excellent landing spot for him presenting tons of opportunity. Here’s why this is such a great situation for Everett.

The Los Angeles Chargers got their new TE1 in Gerald Everett. The move comes at a great time as Jared Cook isn’t on the roster anymore. Everett has been underwhelming through his career so far, never averaging more than 8.0 Fantasy Points Per Game in a season. Now, he finds himself in a fantastic landing spot. Last season, Jared Cook only had a 57.0-percent (No. 39 among qualified tight ends) Snap Share and still averaged more FPPG than Everett and his 73.2-percent (No. 18) Snap Share. Combining the targets of Cook and Donald Parham last season gives you 110 targets. That’s the same amount of targets Kyle Pitts received last year. Everett has never received more than 63 targets in a season, so this is an excellent opportunity for him.

Josh Palmer is firmly cemented as the WR3 on the Chargers. If you want a cheap player on an explosive offense with one of the league’s best QBs then look no further.

Palmer’s profile is shockingly average but he provided consistency in 2021 with only one drop and a 100.0-percent Contested Catch Rate. Plus, Keenan Allen is 30 and has quite the injury history. Mike Williams is fairly inconsistent, even if he has an insanely high ceiling. At any point, Palmer could become the WR2 on the Chargers. With a low ADP, Palmer is at least worth the dart throw.

Jerry Jeudy suffered a high ankle sprain in Week 1 of 2021, in what was expected to be a breakout campaign for the second-year WR. Now in his third year, the former first-round pick gets an elite QB in Russell Wilson and a new head coach in former Packers offensive coordinator Nathaniel Hackett. The time is now for Jeudy, who hasn’t scored a touchdown since Week 17 in 2020. In 2020, he had 965 (No. 2) Unrealized Air Yards), only dropping 7.1-percent of his targets. In 2021, he again dropped 7.1-percent of his targets. If he can work on his drop issues, he could very dangerous. It’s also likely that Wilson’s throws are easier to catch than Drew Lock or Teddy Bridgewater‘s.

Speaking of third-year Broncos players, freak athlete Albert Okwuegbunam will finally get the coveted TE1 spot. In the trade for Russell Wilson, Denver shipped off Noah Fant. The 6-6, 258-pound Albert O, with his 98th-percentile speed and 100th-percentile Speed Score, is finally being the given the starting spot and an upgrade at quarterback. 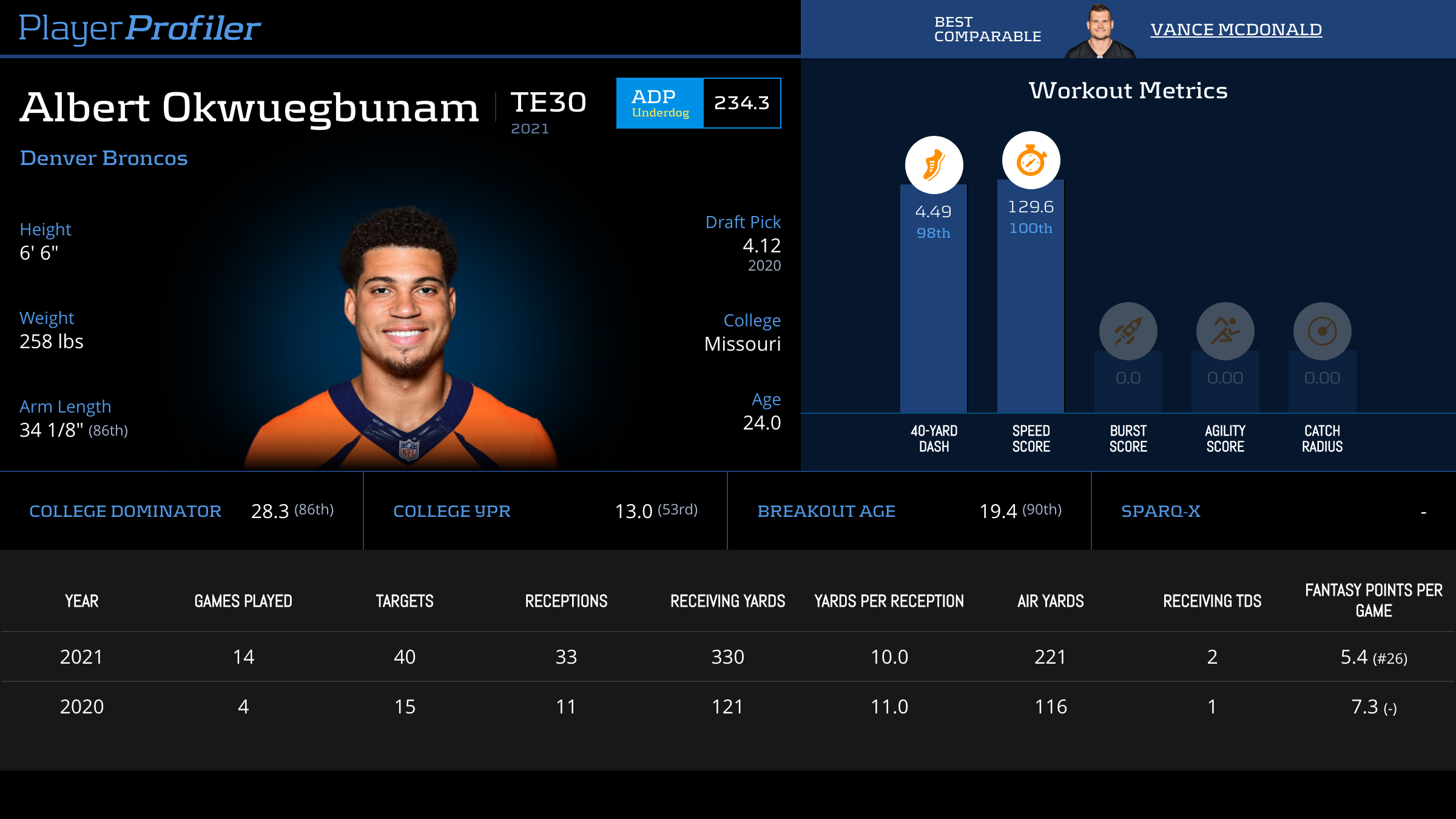 The Broncos have a solid WR corps, so the middle of the field should be wide open for Albert O to take advantage of next season.