NFL rosters are under constant change. Pass-catchers are always quietly affected by the change of available targets year over year. As we all know, opportunity is king in fantasy football, and targets are a proven indicator for receptions, yards, and touchdowns. A tool that we can use to predict offensive usage on these ever-changing rosters is vacated targets.

Vacated targets are targets from former players that will no longer be playing on the team. Theoretically, these targets are available for the returning and new pass catchers (of course this is not always true, but it follows the assumption that the offense will likely have a similar amount of passing attempts the next year).

Vacated targets allow us to predict usage for the following season.

With help from PlayerProfiler’s advanced stats and metrics, today we discuss the fantasy implications of the top five teams with the most vacated targets and what it means this upcoming season.

The Atlanta Falcons have had a noteworthy makeover this offseason with the departure of their longtime alpha wide receiver Julio Jones, and the addition of superstar tight end prospect Kyle Pitts. All of Jones’ targets will go right to Pitts, right? Well, not exactly. Remember, only Jeremy Shockey (127) and Evan Engram (115) have recorded over 100 targets in their rookie seasons. That being said, his draft investment (No. 4 overall pick) along with his immense talent should see him break 100 targets this year. 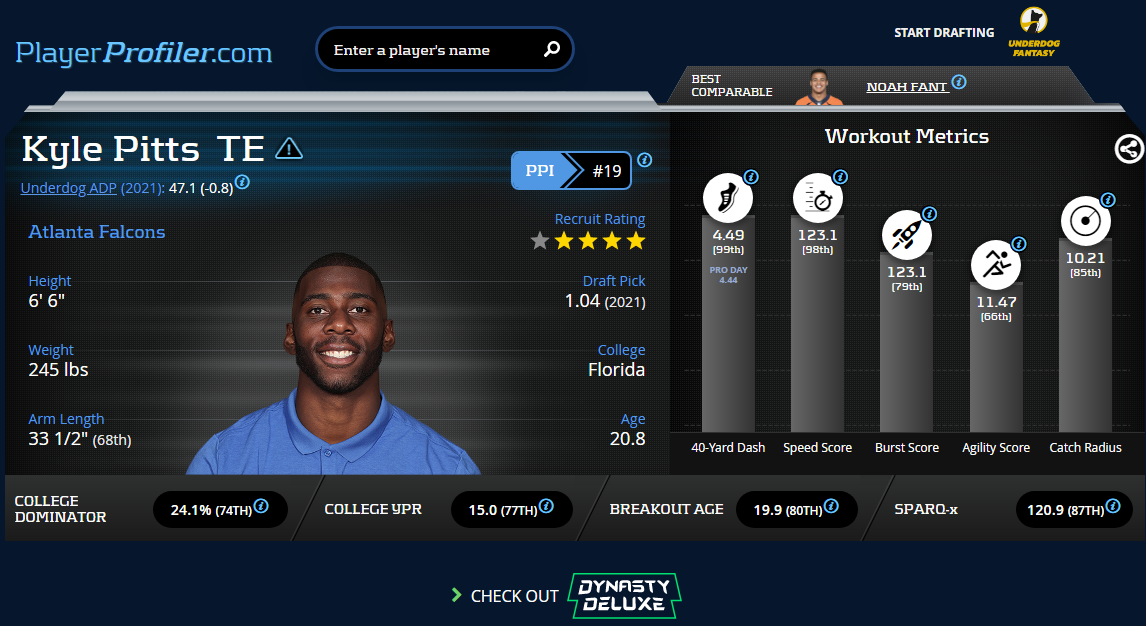 Newly signed and projected starting running back Mike Davis is another name we should expect to receive a large part of those vacated targets. In his first opportunity as a full-fledged starter, he was effective and impressive in the passing game. He boasted 59 (No. 4 among qualified running backs) receptions, 284 (No. 8) routes run, a 15.3-percent (No. 5) Target Share, and an 84.3-percent (No. 4) Catch Rate. The fantasy community has helped correct his ADP heading into this season.

Will Mike Davis make a SPLASH in ATL next year??? pic.twitter.com/oTjX85VtIt

Russell Gage, who had 110 (No. 22) targets this past season, is severely underdrafted considering he will be the third receiving option in this volume-heavy passing attack. Other names to keep an eye on are Olamide Zaccheaus and Hayden Hurst, who should also receive bumps in targets. Calvin Ridley is set to boom as the clear alpha in Atlanta and surpass last season’s 143 (No. 7) targets.

Ja’Marr Chase has come to Cincinnati and will immediately demand the most targets on this team in the post-A.J. Green era. The biggest question for the Bengals is whether they will be able to sustain fantasy production for their three notable wide receivers: Chase, Tee Higgins, and Tyler Boyd. Let’s dive deeper.

Will Chase be the Alpha in Cincinnati or will it be Higgins or Boyd?? pic.twitter.com/J08swjV2vT

In 10 games played last season, Joe Burrow had 404 (No. 22) pass attempts. Extrapolated over a full 16 games, he would have over 646, which would have led the league by 20 attempts. It’s no secret that Burrow likes to sling it, and with an offense full of pass catchers, it doesn’t seem like sustaining Chase, Higgins, and Boyd (in that order) would be a tall task.

Another piece to note is that Giovani Bernard’s targets will likely go to Joe Mixon now that he is healthy. Mixon is still an asset in the passing game, evidenced by averaging 4.3 targets per game (tied for No. 12), in only six games played last year.

What you should first notice about the headline here is how few Air Yards were vacated for the Carolina Panthers. The reason for that is because the targets that were vacated were shallow. Remember, the team has downfield threats Robby Anderson and D.J. Moore returning. Who will claim all of these shallow targets? Will it be rookie Terrace Marshall? David Moore? Chuba Hubbard? No, no, and no. It’s going to be the most dangerous weapon in fantasy football, Christian McCaffrey.

McCaffery will see his usual heavy target load upon return, and will continue to dominate as a receiver. Marshall should take a modest number of targets, but the remaining looks should be spread out to inflate Moore and Anderson’s totals.

Are you drafting Terrace Marshall Jr in rookie drafts?? pic.twitter.com/jgdyOHRkGl

The Titans have 47.9-percent of their 2020 Target Share available this coming season. You read that correctly. The reason for such a big jump in Target Share percentage despite not having significantly more available targets than the other teams on this list is due to the team’s low volume passing attack. Regardless of the major Target Share vacated, the Titans are still top three in vacated targets.

The Julio Jones trade headlined this offseason. What does this mean for the Titans? Sorry Anthony Firkser and Josh Reynolds, you both will be banished into the depths of nonrelevance this year. But the Titans now have two alpha wide receivers, and we can expect a higher volume of passing plays. That play action with Derrick Henry to Jones or A.J. Brown will terrorize opposing defenses. As long as Jones can stay healthy, we are looking at a 1A, 1B situation with Brown leading the way in productivity. The main takeaway is that there will be plenty of targets to go around to those who demand them.

The Chosen One, Trevor Lawrence, walks into a situation where the Jaguars have 240 targets to redistribute, and he has options. Remaining on the team are pass catchers D.J. Chark and Laviska Shenault. The Jaguars also brought in veteran wideout Marvin Jones, who has a chance to usurp Chark’s role and shove him further down the depth chark (editors note: I guess I’ll allow it, but barely).

The player on this offense to be most excited for is second year wide receiver Laviska Shenault. Everything seems to be lining up for Shenault to become an alpha receiver and fantasy breakout. He is going from Gardner Minshew to Lawrence and 41.1-percent of his team’s 2020 Target Share has been evacuated. He’s Best Comparable to A.J. Brown, boasted a +27.5-percent (No. 8) Target Premium, and had a 116.0 (No. 18) QB Rating when Targeted. He has the tools, and is a player who we should target heavily in any kinds of drafts.

The other player who must be mentioned is the heartthrob of Rotounderworld, Travis Etienne. Whether this pick at No. 25 overall was to please the new franchise quarterback or not, Etienne was taken with significant capital. He has shown he is more than capable in the passing game, amassing a 12.2-percent (87th-percentile) Target Share his senior year with Clemson, coming from none other than Trevor Lawrence. The Jaguars will look to pass to the running backs this year, and Etienne will absorb plenty of the available targets.

Coming in at the top spot is the Detroit Lions, with absolutely staggering numbers. The Lions decided to let all of their wide receivers walk in free agency this year and look to let Jared Goff suffer for his sins. T.J. Hockenson is set to explode in his third NFL season. Best Comparable to superstar Travis Kelce due to his impressive workout metrics, Hockenson is in prime position to capitalize on the lack of competition around him and become the player he was drafted to be at No. 8 overall in 2019.

Hockenson should lead the Lions in targets and be a rock solid TE1 this season.

Both running backs, D’Andre Swift and Jamaal Williams, will benefit with all of the vacated targets. In a limited role last year, Swift tallied 57 (No. 13) targets, 46 (No. 12) receptions, and 357  (No. 11) receiving yards. In a full season as the starter on a team that is expected to be in pass happy Game Scripts, there’s no reason not to believe that Swift won’t be in the top eight in each of those categories. Williams showed his receiving capabilities during his time with the Packers, and will see targets out of the backfield, but he is no more than a handcuff this season.

As for the receivers, the combination of Tyrell Williams, Breshad Perriman, and Amon-Ra St. Brown are rather uninspiring. If you want to take a flyer on one, I’d go with the upside of the rookie St. Brown. None are worthy of anything other than late round redraft pick status until proven otherwise.