When there is so much going on, what should fantasy gamers and sports fans focus on? This is the question I will answer for you in this series of articles entitled, “Lessons Learned.” Here is Lessons Learned – Week 11!

1) Rhamondre Stevenson is My Kind of RB

A lousy Sunday rushing performance notwithstanding, Rhamondre Stevenson continues to show he’s my kind of running back. In New England’s 10-3 Week 11 snoozer of a win over the New York Jets, it didn’t matter that he only posted 26 rushing yards on 15 attempts with no scores. His six catches for 56 yards was enough to carry him to 14+ fantasy points and a high-RB2 finish.

It’s weeks like this that remind me why I’m glad to have Rhamondre on my roster and will target his type again in 2023. He has a high-floor, high-ceiling back who’s a breakaway runner, goal-line back, and supersized James White all rolled into one.

Despite the Week 11 rushing struggles, his passing game work helped him outscore Saquon Barkley, Nick Chubb, Miles Sanders, and Dalvin Cook on Sunday. For seven straight games now, and in 10 of 12 career games where he’s seen a 50-percent snap share, he’s finished an RB2 or better. His 2022 running mate, Damien Harris, is an unrestricted free agent after the season, which locks in Stevenson’s 2o23 role and fantasy upside.

Action: Stevenson is a high-floor, high-upside type of back we’ll target early again in 2023 drafts.

2) Could We Have Foreseen Jamaal Williams’s Breakout?

Jamaal Williams sits just outside the RB1 in fantasy scoring and leads the NFL in rushing touchdowns. His next touchdown will be No. 13, matching the total from his first five seasons combined. And he never exceeded 13 in any of his four seasons at BYU.

Having never before finished above RB34, his 2022 fantasy breakout in this, his age 27 season, is stunning. Could we have foreseen it? Well, there’s nothing remarkable in his athletic profile. He’s not particularly big, fast, or agile, and he never breaks a long run. He doesn’t juke, evade tackles, or catch a lot of passes. And his red-zone conversion rate, while good, is not top-of-the-league stuff or even as good as his younger, more athletic, bigger BMI teammate.

But Williams is nearly a 2022 Fantasy RB1 because he…:

Action: To answer the question, no, we probably couldn’t have called Jamaal’s breakout. But his 2022 season is a reminder for 2023 that opportunity can even lift modest talents to fantasy scoring and there’s value in rostering backup RBs next year in good situations.

Tony Pollard doesn’t have the BMI or red zone prowess of Ezekiel Elliott. If that means he’s going to hand over goal-line touches to Zeke, so be it. As Tony is showing, a player doesn’t need red zone touches if he runs behind a rock-solid offensive line and can both run and catch the ball well enough to score from anywhere on the field.

Pollard leads NFL active rushers with 5.9 Yards per Carry. He also leads backs with 11.9 Yards per Reception. Pollard’s top-10 with 16.3 Fantasy Points per Game despite seeing just a 50.5-percent (No. 29) Snap Share. Sunday’s 21-touch, 189 yard, and two score outburst against Minnesota was Pollard’s fourth straight game with over 100 yards from scrimmage and third straight RB1 finish.

Action: There’s no longer any reason for Pollard’s fantasy managers to fret about Elliott’s role in the Dallas offense. Elliott’s going to get his red zone carries until his contract is up. And maybe that’s not such a bad thing for a 210-pound back like Pollard. As Pollard showed again Sunday, he doesn’t even need to be in the red zone to score.

4) Something Interesting is Happening in Washington

The Washington Commanders rolled over the Houston Texans 23-10 on Sunday, upping their record to 6-5. That record doesn’t sound all that exciting, but it’d be good enough for second place in any other NFC division. And the football team formerly known as The Football Team would be sitting on a six-game winning streak had they not blown a 10-point fourth-quarter lead to Minnesota in Week 9.

They have turned their season by turning to a script that has worked very well for a number of teams this year: combine a strong running game with a smothering defense. On the defensive side, no team has given up fewer total yards per game this year than the 277 they’ve allowed over the last six weeks. According to Pro Football Reference, their No. 5 Pressure Percentage Ranking and No. 6 Sack Rating come despite only blitzing at the No. 19-highest rate.

On the offense, they’ve handed the reins over to Taylor Heinicke, their anti-Carson Wentz. Wentz led Washington to a 2-4 record throwing more than three times as many Danger Plays as Money Throws. He likes to chuck the deep ball, and he was solid when in a clean pocket, but he dropped to No. 35 in Pressured Completion Percentage. Taylor, on the other hand, throws the ball short, he doesn’t take a lot of chances, and he doesn’t run, but his passing Accuracy Ranking impressively improves under pressure.

So, for Washington, Heinicke has been just what the doctor ordered. For fantasy, it means we can only look for fantasy scoring from the running game, Terry McLaurin, or the DST. Antonio Gibson and Brian Robinson are splitting carries right down the middle, but Gibson gets the red zone carries and targets so he’s in the better spot. The only passing targets are going to McLaurin and to Logan Thomas when he’s healthy. Curtis Samuel, who started out the season seeing eight opportunities a game from Wentz, has faded into the background with just four targets, two catches, and a few runs every week.

Action: Start Washington running backs and McLaurin. Also, consider Logan Thomas if desperate at TE, and pretty much every fantasy manager that doesn’t roster Travis Kelce is desperate at TE. Lastly, grab the Commanders’ DST off waivers. They’ve quietly become a top NFL defense and have a nice upcoming schedule with the Falcons next week and the Giants twice sandwiched around a Week 14 bye.

As a 2022 Davis Mills fantasy manager, it’s been a tough watch. He’ll put up a usable fantasy performance every once in a while, of course on our bench. Then when it looks like maybe he’s turning a corner and finagles his way back onto our starting rosters, he puts up another clunker like Sunday.

Whether it’s his or the team’s fault doesn’t matter. In his defense, their offensive Game Script is awful. He gets no protection, so he is forced to constantly dump the ball off. His 7.3 Air Yards per Attempt sits at No. 26 even though he throws a decent deep ball. If not for his 53.0-percent (No. 2) Pressured Completion Percentage, he’d have no chance at all. 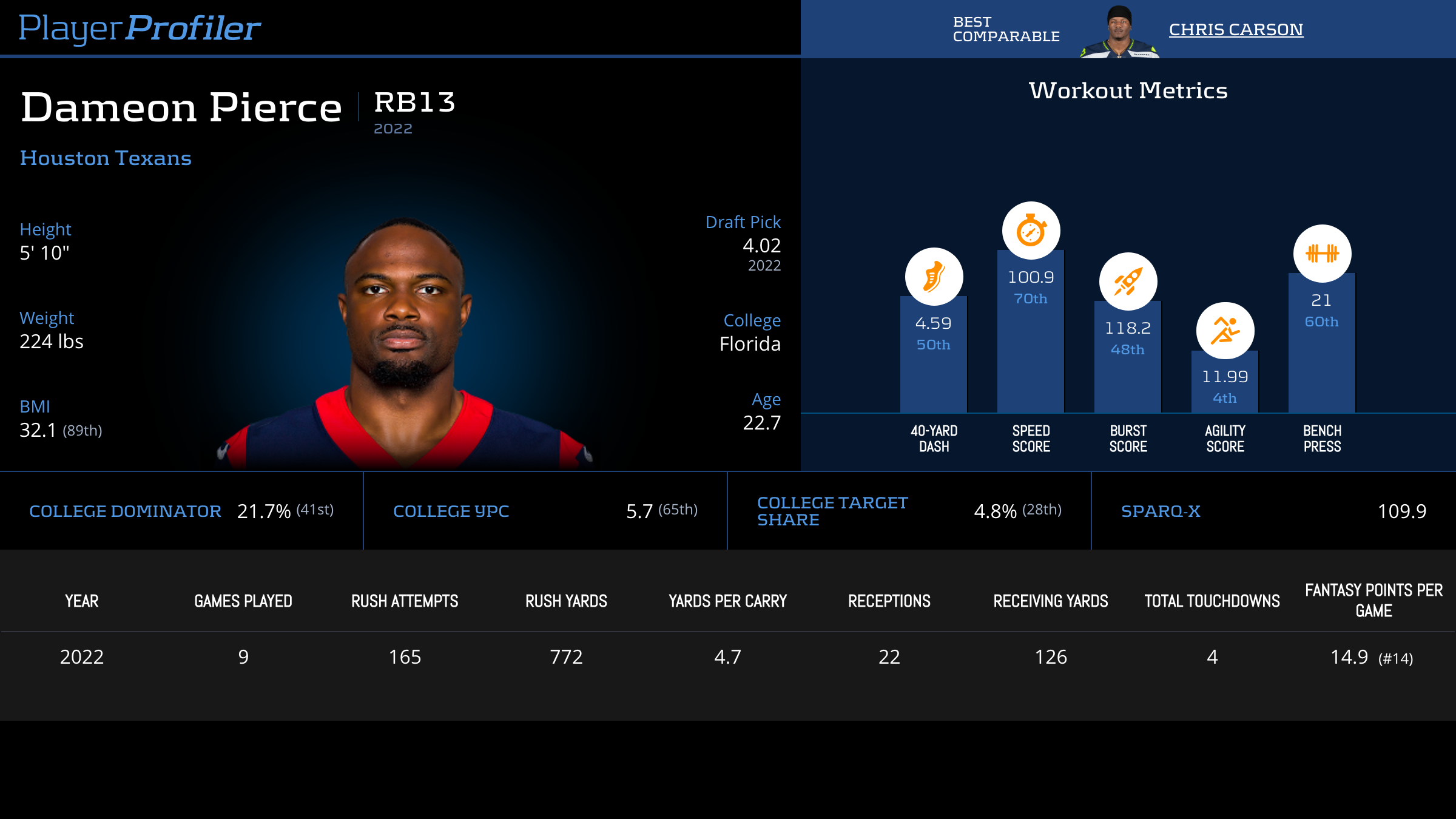 As the Houston season has faded (and, actually, it never really shined), so has Dameon Pierce. He is still getting yardage most weeks but when the team’s not scoring (and, spoiler alert: they’re not), he’s not, either. He has had no rushing scores in the last five weeks. His three early-season RB1 weeks were our sell-high window; he’s failed to post an RB1 finish in his last five. He’s not a big pass catcher and even his rushing yards cratered Sunday with all of eight rushing yards.

Looking to 2023, Brandin Cooks won’t be back. He didn’t want to be there this year. The only returning Texans who might matter will be Nico Collins and Dameon Pierce. But it’s still going to be a bad team, so the odds will be stacked against them. For those of us that held Mills on our rosters this season, we’ll at least have the cathartic experience of freeing up his roster spot next spring as will the Texans when they select a new QB for their new head coach with the 2023 NFL Draft’s 1.01 pick.

Action: Sorry if you drafted any Texans this year. Make it a point to avoid players on really bad teams in next year’s fantasy drafts. We have to stop tricking ourselves that talent can overcome situation. Sometimes it just can’t. Even Pierce couldn’t overcome this mess. If you are in a league that somehow still allows trades, move any Texan that you can – even in dynasty. And remember this come 2023 fantasy draft time.