Welcome to the Waiver Wire Additions: Week 12! Thanksgiving week brings fantasy managers a special treat: a triple header of games and no bye weeks. There is nothing better than enjoying the holiday with family and friends and hopefully getting a fast start to your fantasy week with some Thursday smash games. There will be some star-studded players on display on Turkey day as Buffalo faces off with Detroit, Dallas hosts The New York Giants, and Minnesota-New England ends the slate of games on Thursday Night.

Week 12 is an important one for waivers- the fantasy playoffs are right around the corner and the significance of wins and losses weigh heavier and heavier. Some fantasy managers are fighting for their playoff life and need a win this week. Others are vying for valuable bye weeks. With the season winding down, take extra time to grind the waiver wire this week. Certain players not listed here may have available in your league. Being extra meticulous could give you a leg up on your league mates.

We have two more bye weeks upcoming. Be prepared and try to be at least one week ahead.

The Pittsburgh offense showed signs of life. They lost 37-30 to Cincinnati, but Pickett passed for 265 yards and a TD. He rushed for 51 yards and a TD in his previous game.

Pickett could have some fantasy relevance to end the season, especially in Superflex formats.

Superflex managers should check on McCoy. Kyler Murray could be held out through the bye week, and McCoy makes for a solid low-end QB2 streamer. Hollywood Brown should be back next week, which gives him a talented trio of WRs at his disposal.

I have written about Perine in previous articles (along with Dontrell Hilliard and Jaylen Warren) as a handcuff that should be rostered. Perine is a capable receiver and put those skills on display in a big way with the best game of his NFL career this past Sunday. Joe Mixon is dealing with a concussion and should miss this week’s game against Tennessee. Perine will be an RB2. This week’s TD total was absolutely bonkers, but let this be a reminder that our benches should feature handcuffs whenever possible- especially ones who catch the football.

Cook has been a player I have written about almost weekly. He had his best game of the season against Cleveland this week, with 11 carries for 86 yards, including a 29-yard rush. He also saw two targets. Cook has multiple outs to returning value: he could carve a more significant role due to his strong play, and his value would skyrocket if Devin Singletary were to miss time. He also has some appeal this week for RB needy managers, or managers searching for a flex, in a plus matchup against Detroit.

Murray makes it for our threshold as he is rostered in only 23 percent of Yahoo Leagues. He has emerged as the starting RB in Denver. Murray has outrushed Melvin Gordon 17-8 (Editor’s Note: This article was written before the news of Melvin Gordon broke) and has also caught all four of his targets. He finished with 72 combined yards and has found the end zone in back-to-back weeks. Consider him a high-end RB3 moving forward and a handy player to roster down the stretch.

Ingram is the clear handcuff in Arizona, behind an oft-injured veteran RB in James Conner.

If anything happens to Conner, fantasy gamers will be happy they rostered Ingram.

All three players are handcuffs with receiving ability. If the starting RB ahead of them were to go down, all three would be flex plays.

If you still have FAAB left, a quick reminder “you can’t take it with you.” Time to unload the clip if Burks is still available in your league. Burks was not quite Christian Watson last week, but he was close. The first-round pick had his breakout performance. He posted career highs in targets (8), catches (6), and yards (111). The Titans targeted him on the first snap, and he was a focal point of the offensive game plan. If Burks can emerge as a consistent threat, Tennessee will be a dangerous team down the stretch. He is the waiver wire addition of the week at any position.

Williams was cleared to practice this week. I am not sure when he will make his debut, but we are talking about a dynamic, exciting first-round draft pick who could be a Jaylen Waddle-like player in this league. 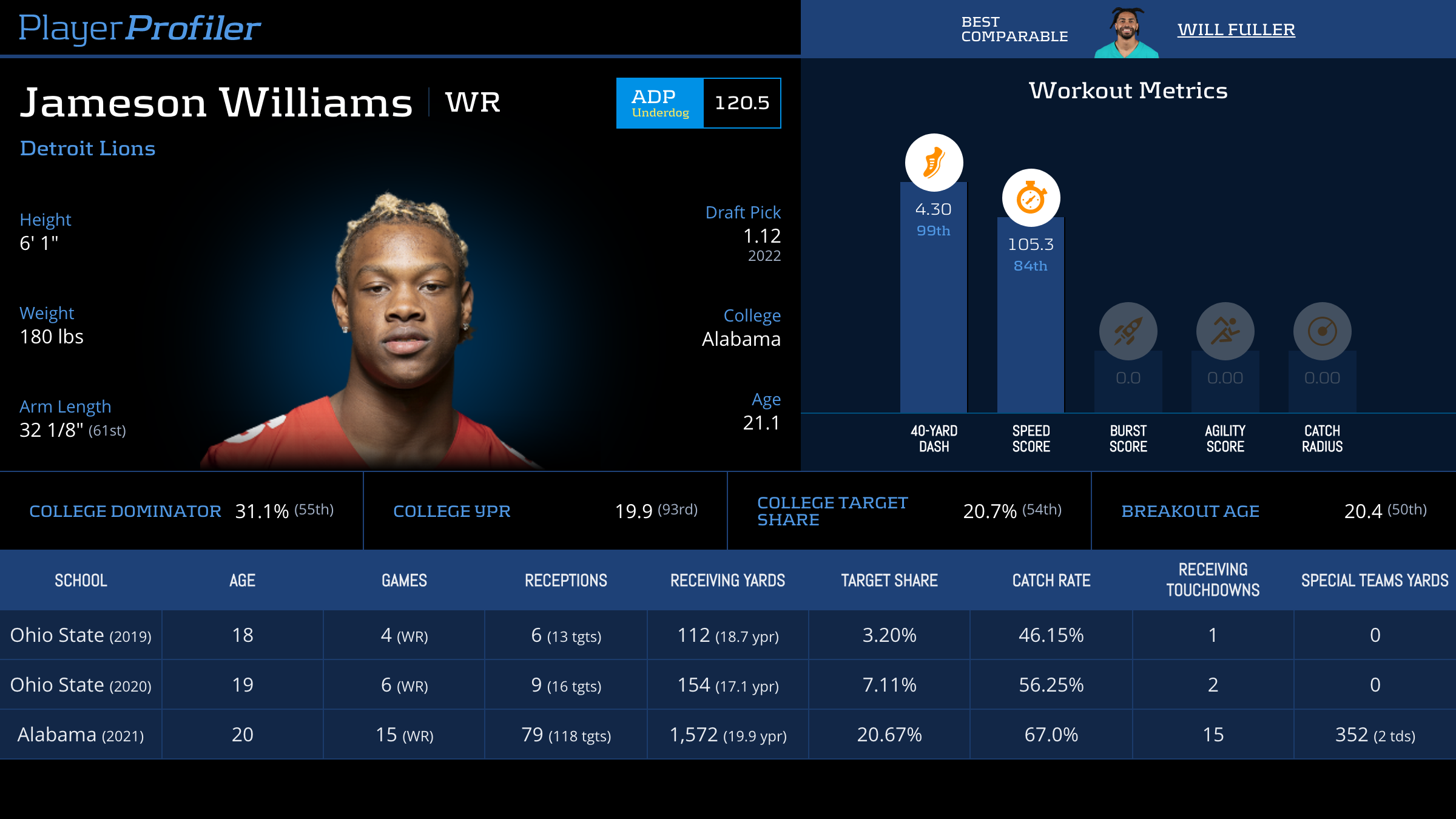 He is a perfect addition for teams that are in great playoff shape and could use a high-upside hammer as a bench stash to put their teams over the top.

The Beckham watch continues. He is eligible to sign with a team any day now. Perhaps he could have a New York homecoming for a Giants team that could use a boost?

If you are looking for upside, Moore is an appealing addition this week. Kadarius Toney exited with a hamstring injury, and Moore saw the best game of his career. Moore caught five passes for 63 yards on six targets. Fantasy gamers should prioritize him this week. He could be an impactful flex play down the stretch and throughout the playoffs. Monitor the Toney injury.

Watson led all KC WRs in snaps and routes run. We have now seen two games in a row where Watson is almost an every-down player. He caught three passes for 67 yards on only four targets but has passed Marquez Valdes-Scantling in the WR pecking order.

Robinson had a monster game. He caught all nine targets and finished with a season-high 128 yards receiving. Robinson has now had two games with eight or more targets in his last three and out-targeted Devin Duvernay nine targets to one. The other wide receivers in Baltimore are simply getting in cardio and not factoring into the offensive game plan. He is available in 95 percent of Yahoo leagues.

Davante Adams had the smash game, including the game-winning TD catch, but Hollins quietly had nine targets, catching six for 52 yards. Hollins has five games with six targets or more on the season. He is playing every down and should continue to garner weekly looks.

Landry followed up a six-target game last week with four more targets but found the end zone. He led New Orleans WRs in snaps and should continue to see significant time out of the slot. The Saints face two difficult matchups on the road the next two weeks in Tampa Bay and San Francisco, and we could see Landry catch a few extra low ADOT looks.

The Broncos WRs are now a mash unit with Jerry Jeudy and K.J. Hamler both out with injuries. Hinton stepped up as a replacement catching three passes for 57 yards.

Wan’Dale Robinson had his best game so far but went down with an ACL injury that will end his season. James stepped in as the slot receiver when Robinson went down and caught three passes for 48 yards and a TD. He should see a decent-sized role as the slot WR moving forward.

(Note: Juwan Johnson is slightly over our threshold at 30 percent rostered. Add him if available.)

We saw a resurgent Thomas play nearly every snap and tied for the team lead in targets. 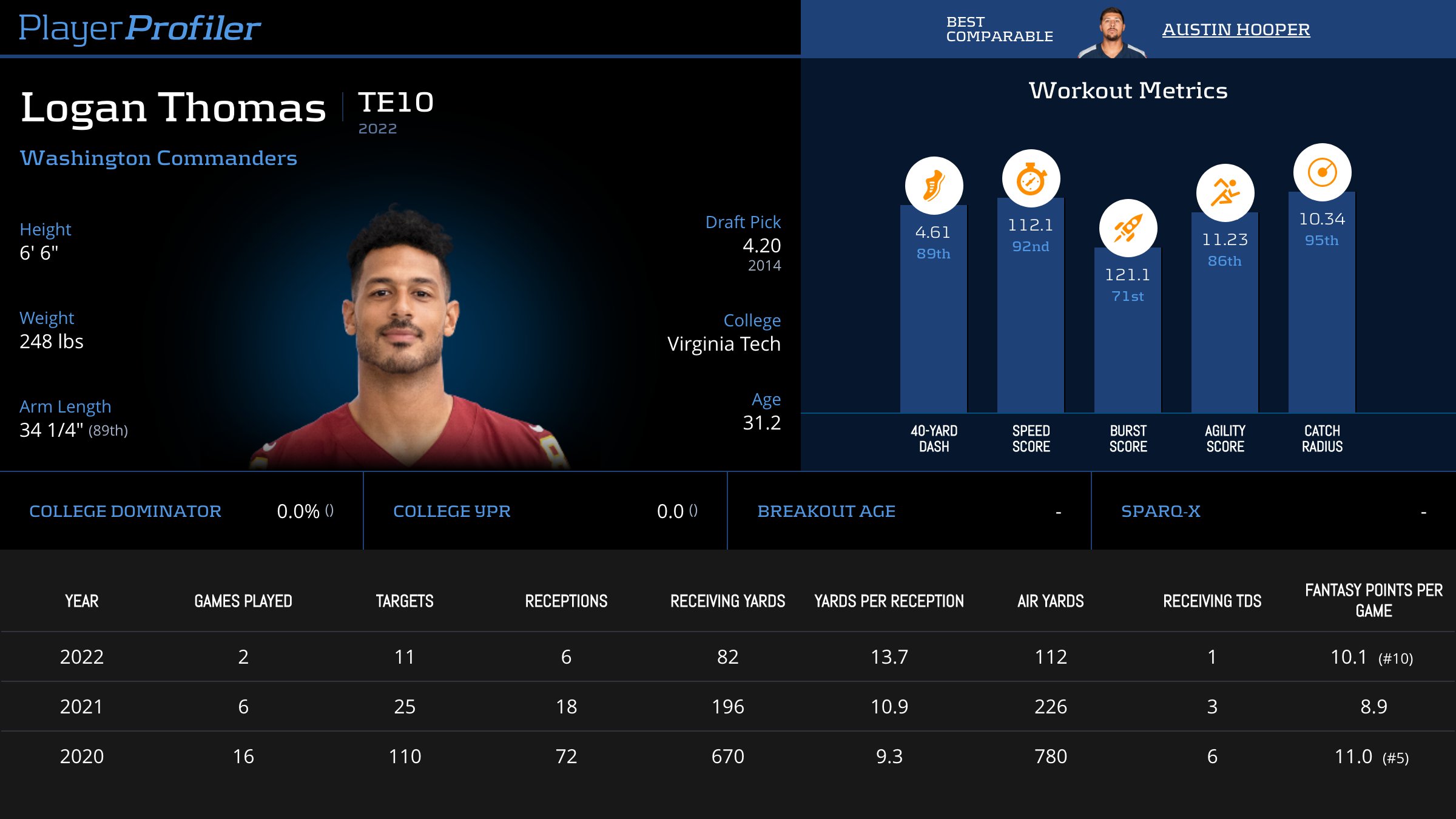 He led Washington with five catches for 65 yards in the easy win over Houston. Thomas should be a priority addition this week. He is a Ron Rivera favorite who has had fantasy success in the past and should be a high-end TE2 moving forward.

McBride makes his first start tonight on Monday Night Football. Zach Ertz had 69 targets this season, and McBride steps into a great situation. The rookie caught 90 passes in his final year at Colorado State and was the first TE selected in the 2022 NFL Draft. Dynasty league managers should also kick the tires on him as he should gain a lot of value over the next few weeks.

Hooper is coming off of a big performance. He caught two TD passes on four catches in Tennessee’s Thursday night win over Green Bay. Fantasy gamers should consider him a TE2.