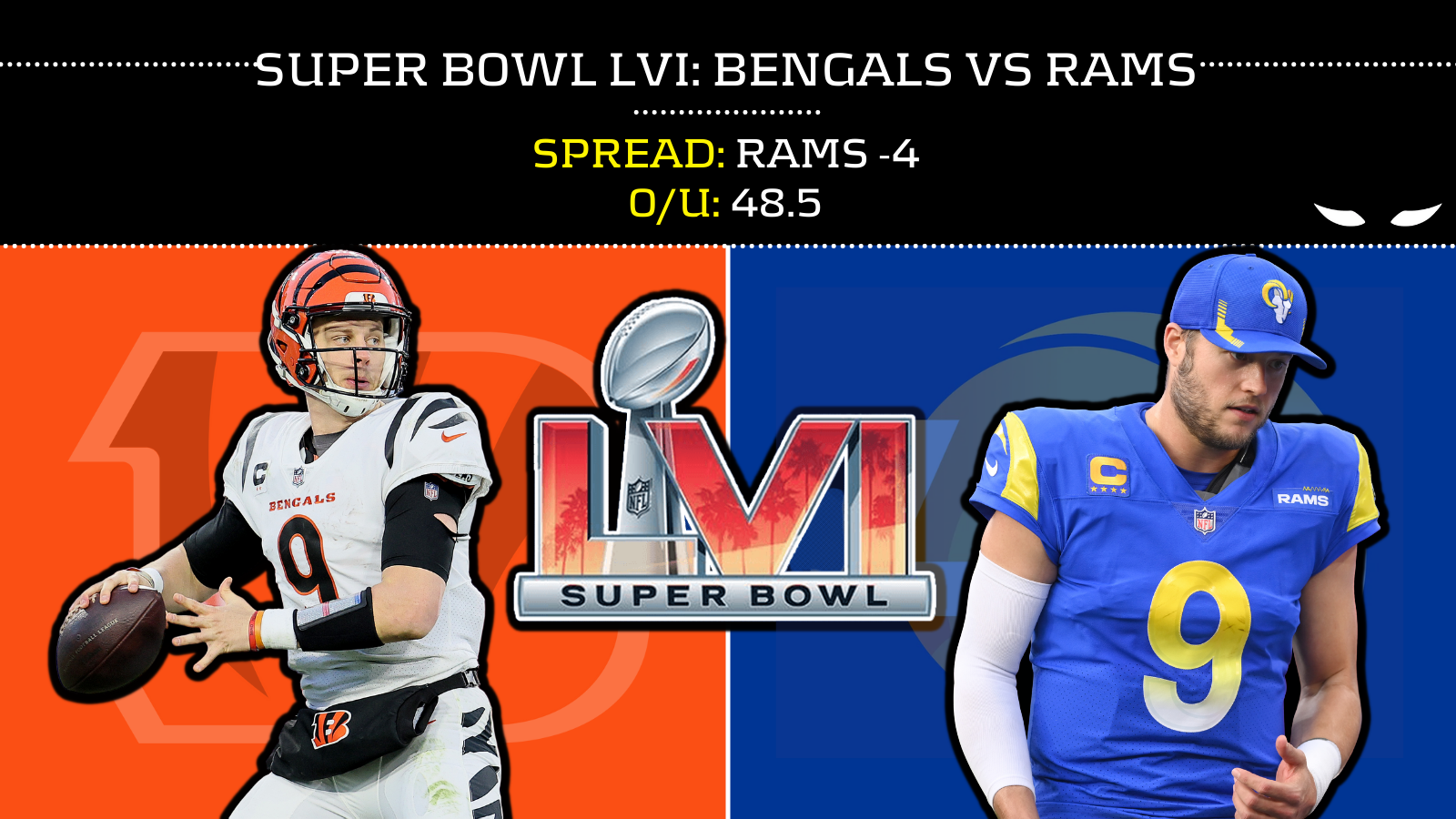 The game will come down to how the offensive line can handle the pressure against Aaron Donald and Von Miller. Burrow only managed a 47.1-percent (No. 14) Pressured Completion Percentage. And for the Bengals to win, he will need to make big throws under pressure. On the other side of the coin, he ranks No. 1 in Clean Pocket Completion Percentage. He is also No. 1 with 8.8 Yards per Pass Attempt, But it helps if you’ve got talented teammates.

Now in Los Angeles, Matthew Stafford is surrounded by easily his best coaching staff and teammates. And it’s reflected in the metrics. His Touchdown Rate ranks No. 2 among quarterbacks with ten or more starts. And his 63.5 (No. 4) Total QBR puts him ahead of Patrick Mahomes. He also gets the benefit of throwing to outstanding pass catchers. 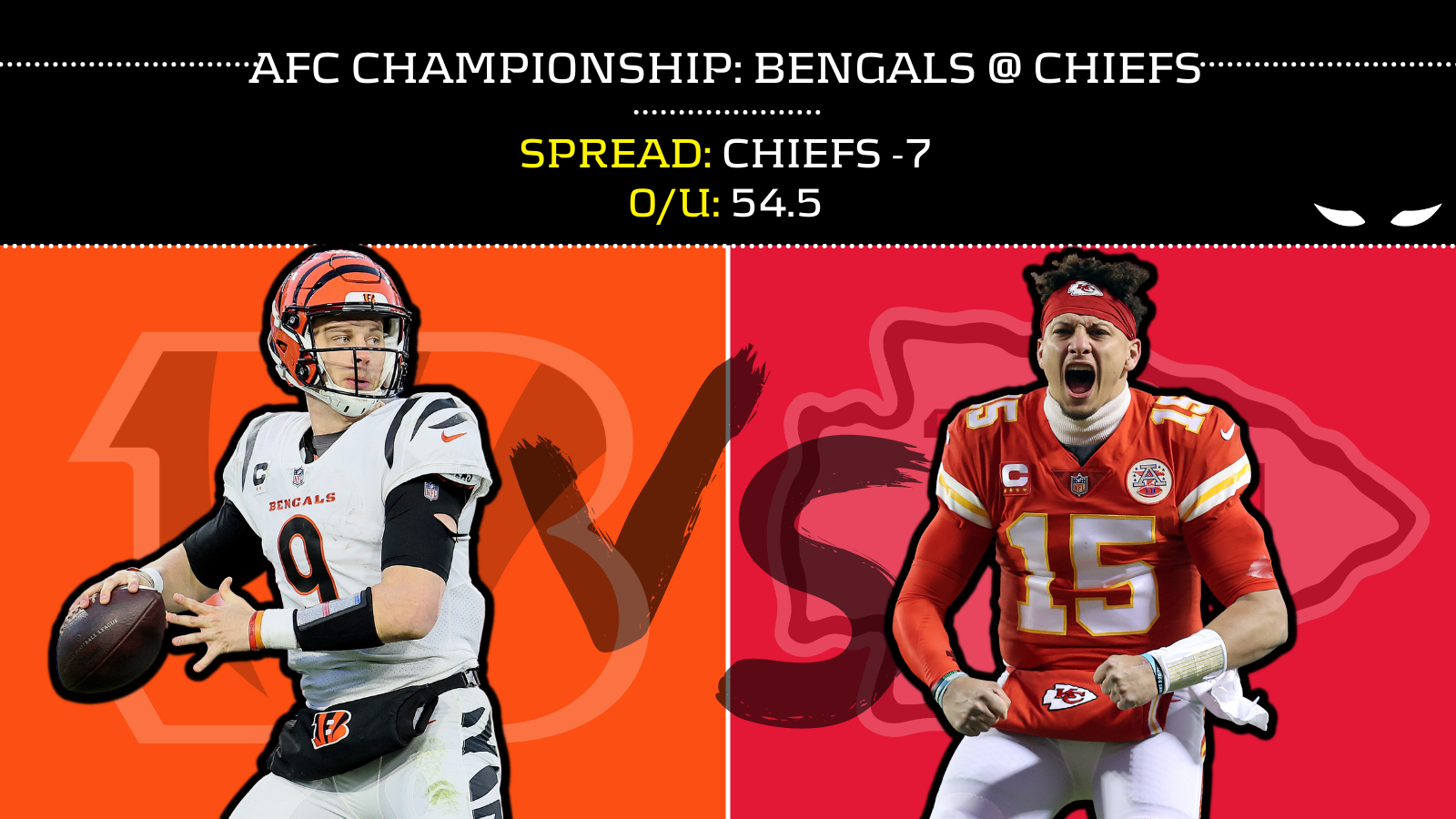 Today, we’ll look at the AFC championship matchup between the Kansas City Chiefs and the Cincinnati Bengals, a rematch from Week 17 where Cincinnati scored in the last moments of the game and won 34-31. A key result of that victory, the Bengals won their first division title since 2009.

Once a young team with plenty of promise, the Bengals have given life to a franchise that had embodied mediocrity. Now they are four quarters away from the Super Bowl. I expect the Bengals to come out playing fast and pushing the tempo on offense; unfortunately for them, the offensive line may have trouble keeping the pace with its skill positions. Kansas City wins 35-27. 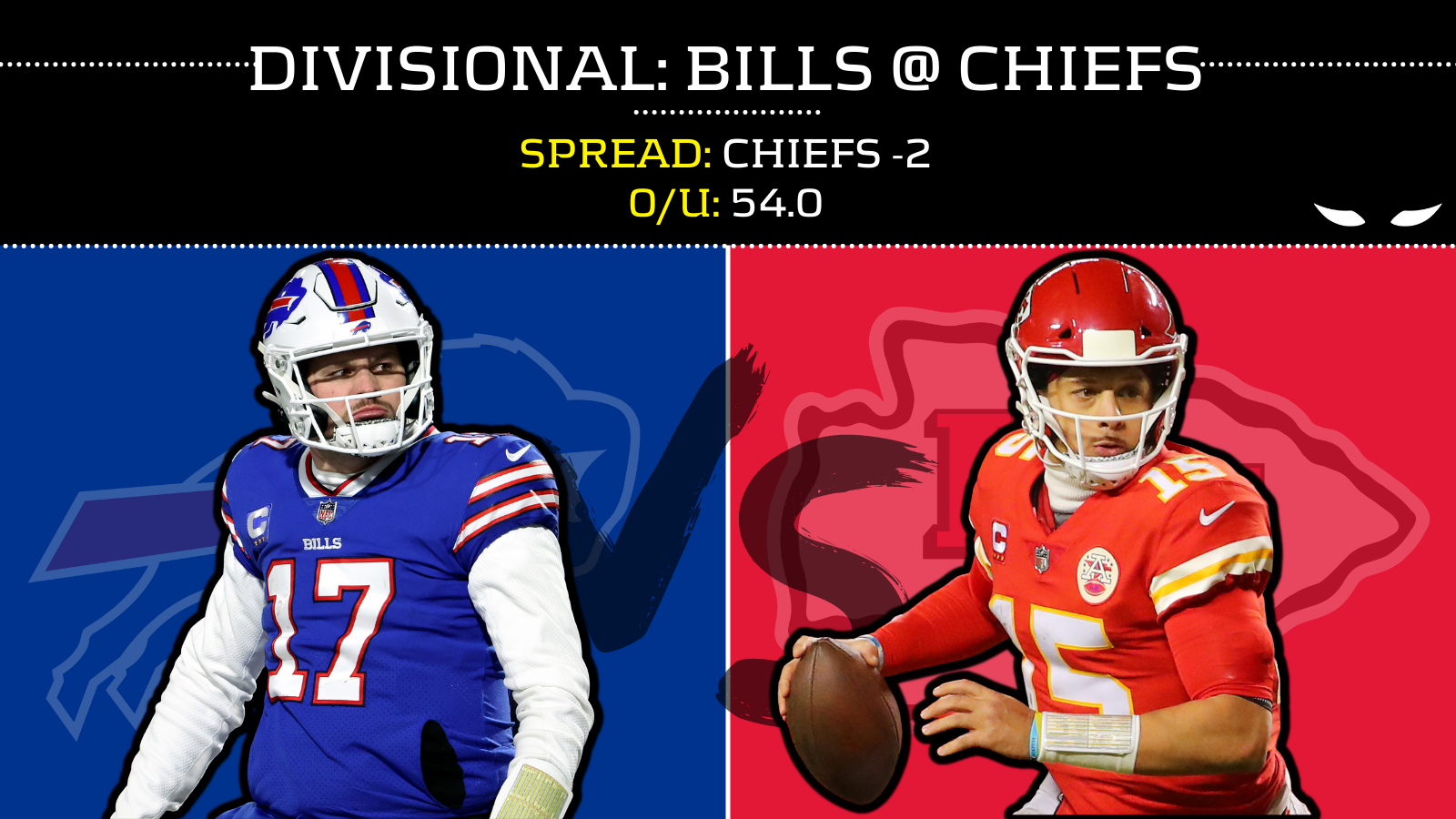 The more I read and research between these two teams, it seems the more in common the are with one another. The gunslinger quarterback, the alpha wide receiver, the efficient tight end, and even the opportunistic defense the schemes many different ways to find advantages on the field.

Both teams are peaking, playing strong, and lest we forget, last year the Chiefs beat the Bills 38-24 in the AFC championship. Do yourself a favor; sit back and enjoy two superior teams scheme against each other in a Divisional tilt that has the potential to be a classic showdown. 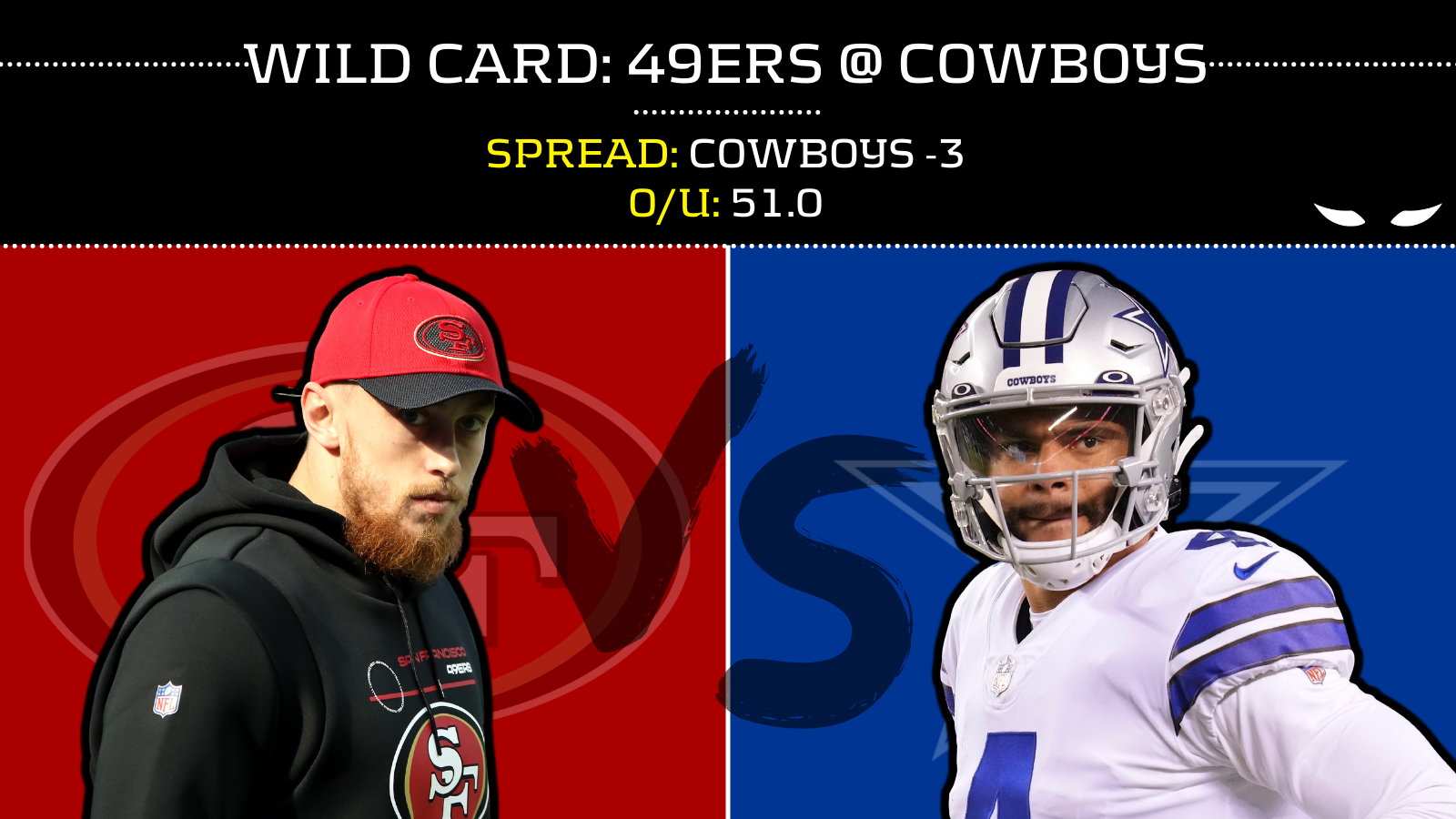 It’s Wildcard Weekend in the NFL, and this matchup has my nostalgia cranked up all the way with these two storied franchises.  It hasn’t always been pretty for both of these teams since the mid-90’s, but thankfully we have two talent rich squads with incredible athletes performing at the absolute highest level. 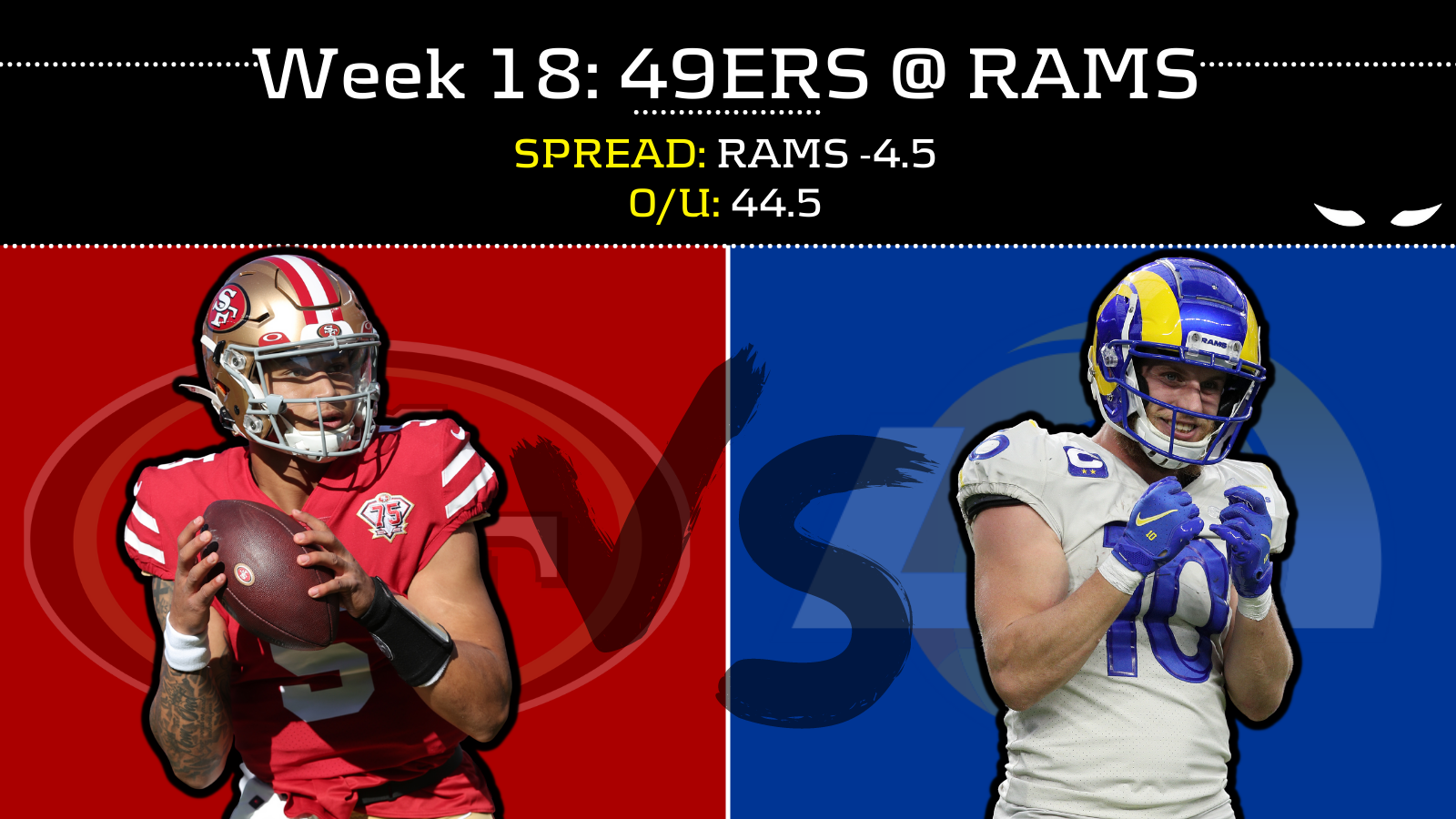 No longer tethered to Jared Goff, we see the blossoming of a star receiver with Cooper Kupp. He’s always been a weapon for the Rams, but with Matthew Stafford calling the shots, he’s unleashed on the NFL and boy has it been a joy to watch. The Rams also have valuable weapons Van Jefferson and Odell Beckham, making a case for the most talented trio of wide receivers for any team. They will surely make plays, but Kupp is who Stafford looks to, and there’s no reason why he should stop.

The Jimmy Garoppolo injury opened the door for Trey Lance to start. After a slow start against Houston, he finished with 249 passing yards, 31 rushing yards, and two passing touchdowns. The rookie quarterback numbers from the 2021 NFL Draft have been a mixed bag, so it was refreshing to see him play competently. If Garoppolo can put in a limited or full practice on Friday, and with a playoff appearance on the line, the team may prefer the established veteran to start. 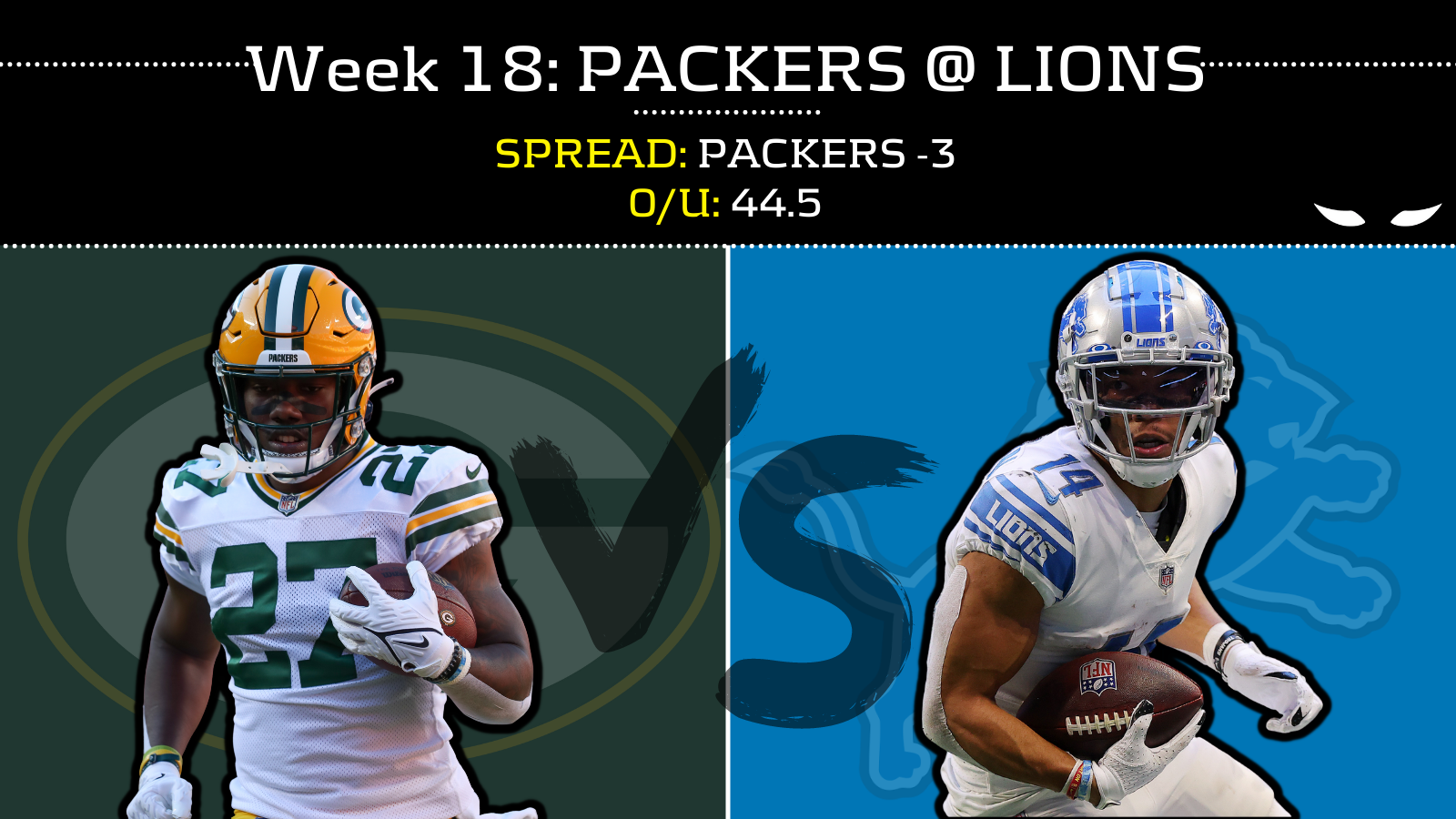 The Packers have not only clinched the NFC North divisional title, but also the No. 1 seed in the NFC playoffs. Aaron Rodgers and Davante Adams have campaigned to play in this meaningless game for the Packers, but odds are they will sit out a significant portion of the game, if not all of it. For gamers playing in Week 18, or those eager to make DFS lineups, wait for confirmation as to whether or not key veteran skill players will play.

The only fantasy option from this Lions passing attack is Amon-Ra St. Brown, who was a league winner for many. His Target Share over the last five weeks? 32.2-percent. To put that in context, Cooper Kupp’s 32.3-percent Target Share ranks No. 2 in the league. For Week 18 and DFS purposes, there’s no reason to think St. Brown will stop now. He’s a strong WR2 play. 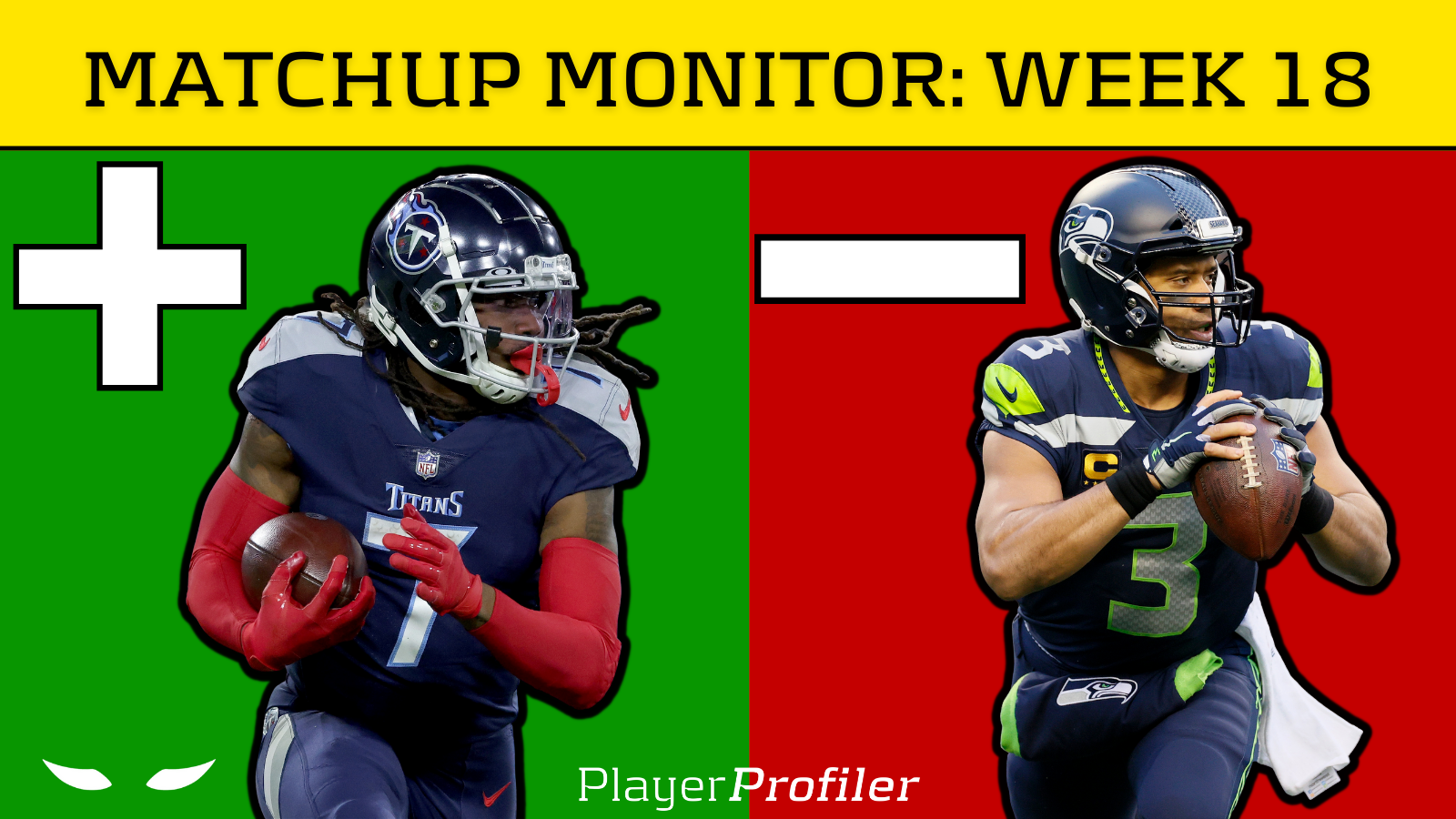 It’s Week 18 and the Titans can lock up the AFC one seed with a win. No doubt they’ll trot out D’Onta Foreman, who just ran for 132 yards and a touchdown last week. Entering Week 17, Tennessee averaged 31.7 (No. 2) Team Run Plays Per Game, and Foreman now has three games of 100-plus rushing yards in his last five. Expect the Titans to play hard for the top seed and expect Foreman to be a big part of that against a weak run defense.

This week, the Cardinals are looking forward to the playoffs while Seahawks will try to spoil a division rival’s playoff seeding. Wilson, outside of airing it out against the Texans and Lions, has been a mediocre fantasy QB post-injury, with both his yards per attempt and completion percentage dipping from pre-injury Russ. He does not hold much rushing value either, so do not expect him to be a great play this week. 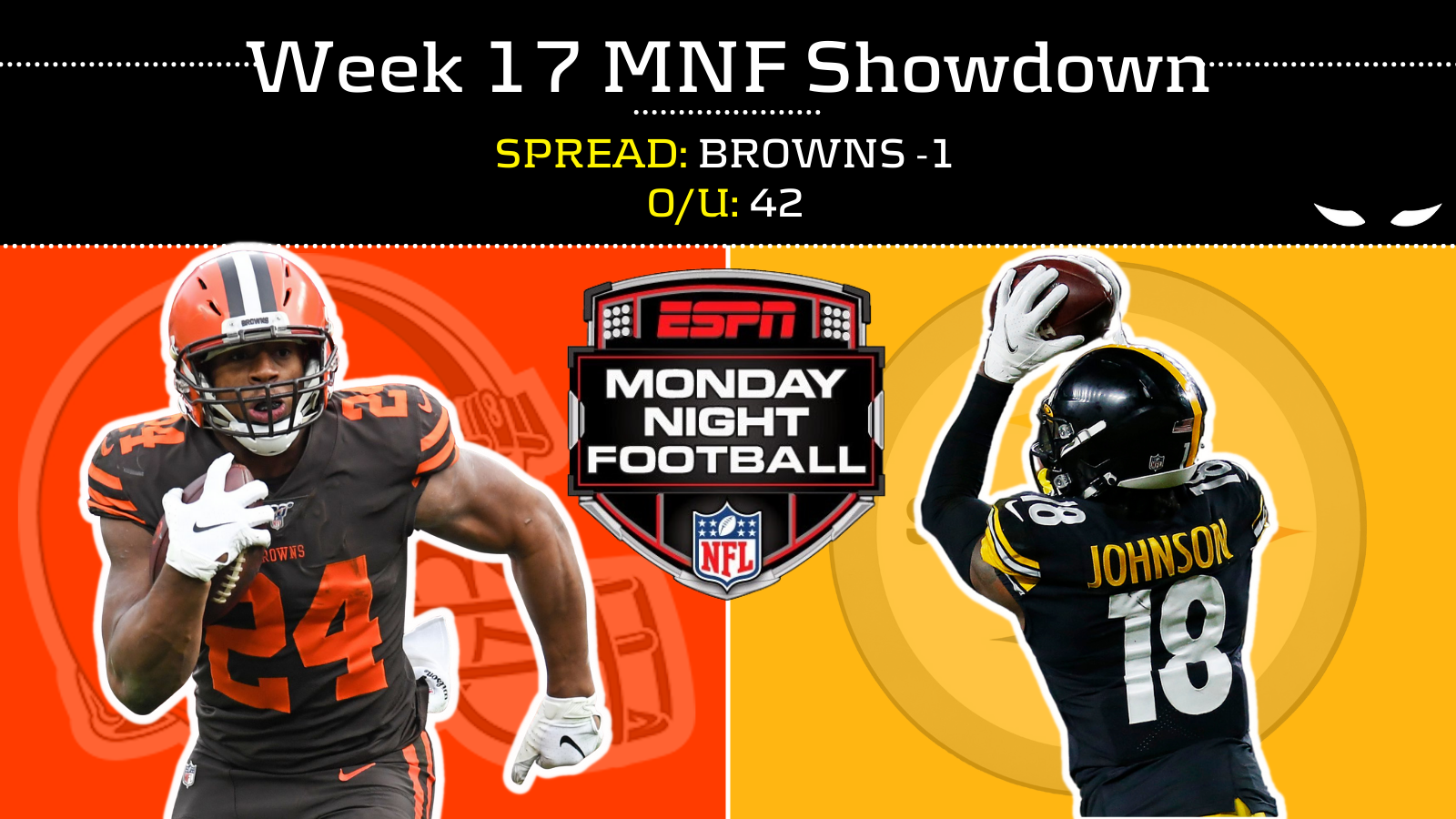 The Browns can officially chalk up their season as lost. Baker Mayfield is playing through injuries and pumping out inefficient performances, even making Jarvis Landry an unreliable fantasy play. The teams production, as always, is propped up by the rushing duo of Nick Chubb and Kareem Hunt. Both backs are playable in fantasy, but it’s Chubb who has been putting out league winning performances over the fantasy playoffs.

Tonight marks Ben Roethlisberger’s last home game as a Steeler, and this team is not going to let their legend down. Najee Harris, while not an efficient back, has done a fine job of moving the chains and a great job of scoring fantasy points. Diontae Johnson is having a career year and dominates the opportunity and production in the Pittsburgh passing game. Finally, Pat Freiermuth returns from injury and steps right back into his red zone threat / safety net role. 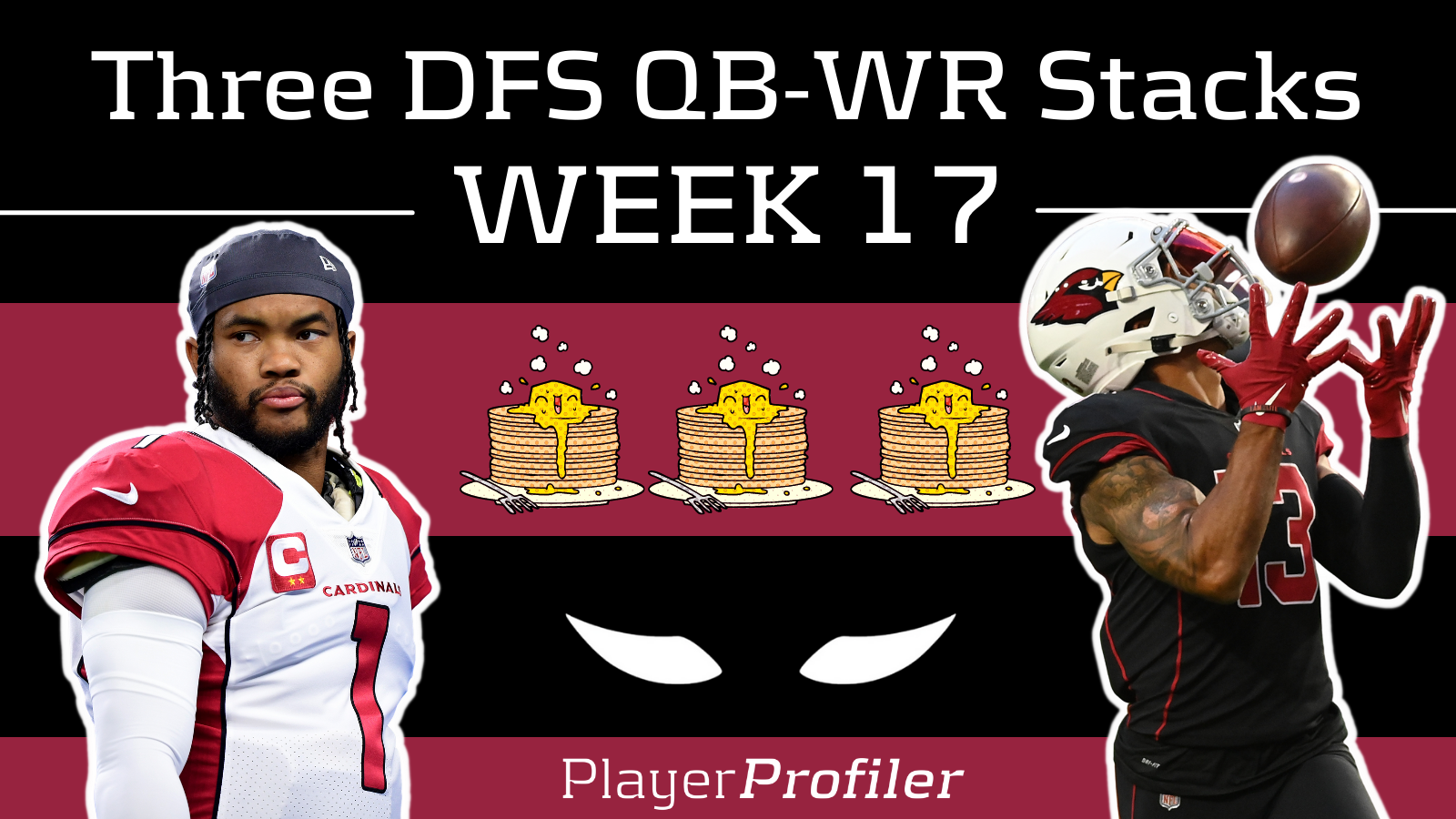 The Cardinals face the Cowboys this week in the game with the highest total on the slate. Despite this, Kyler projects to go slightly overlooked. Since returning from injury, he has two top six finishes but also two finishes outside QB12. The matchup is also intimidating on paper against the Cowboys defense. In the absence of DeAndre Hopkins, Christian Kirk takes on a centerpiece role in the Cardinals offense. Yet DraftKings still prices him below $6k. Take advantage of this yet to be priced-in role change.

Budget stacks are a recurring theme in this series. In an age where daily fantasy gamers are more than happy to pay up to $7-8k for QBs, there’s significant opportunity in paying down to boost the rest of the roster. That leads us to Davis Mills. The rookie QB for the Texans has played surprisingly well this year considering a near league worst situation he’s in. With a collegiate profile indicative of a deep field threat, evidenced by his 19.7 (93rd-percentile) Yards per Reception, Nico Collins has high splash play potential creating a low bar to return value. 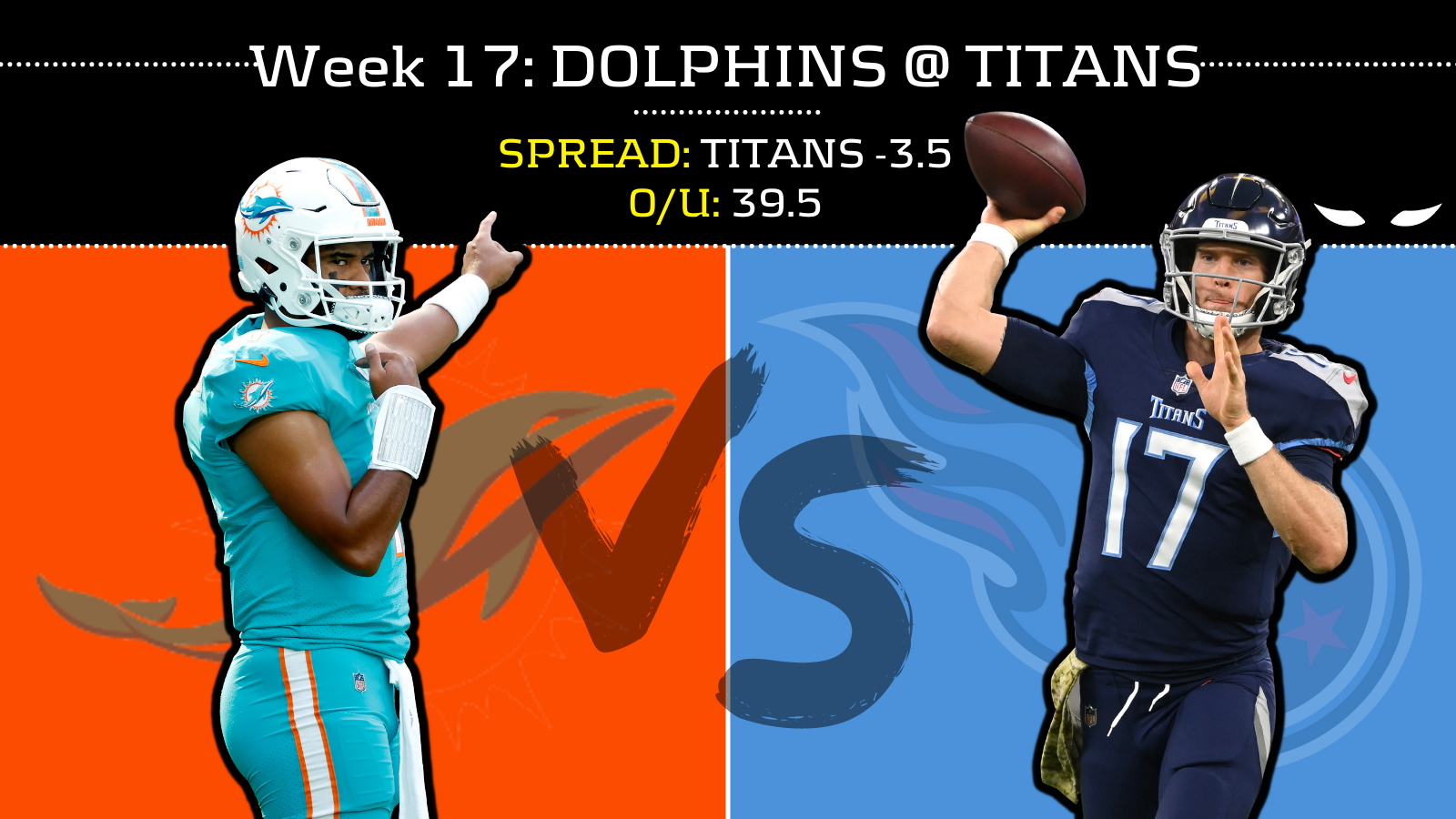 Jaylen Waddle has become the focal point of this offense, and he’s done this at a historic pace. The record for most receptions by a rookie is Anquan Boldin with 101 over 16 games. Waddle currently has 96 (No. 6 among qualified wide receivers) receptions, with two games left in the year. He is a strong WR2 and should be in all lineups for championship weekend.

It’s trending that we see more of Jeremy McNichols or even Dontrell Hilliard lined up as a receiver, or in on passing situations together to help fill the void that the team has. Nobody on Earth can replicate what Derrick Henry does on the field, but D’Onta Foreman has done an admirable job along with his teammates of creating a patchwork rushing attack, it’s just incredibly difficult to trust them on championship Sunday.