After one full year of waiting, fantasy football’s greatest mock drafting rivalry has been renewed. It’s UNDERWORLD VS ROSTERWATCH 2 (Electric Boogaloo?) The best from both sites partake in a fierce, ongoing, totally-serious-with-no-room-for-cheeky-shenanigans series of fantasy football rookie mocks.

Make sure to follow along and let us know who the good (and bad) picks are.🔥

This 1QB rookie mock went from Monday, February 21st to Tuesday, March 1st. Will PlayerProfiler’s advanced stats and metrics win the day? Will RosterWatch leverage their famous fantasy football cheat sheet in hopes of winning this all-time great mock draft showdown? If an Underworld guy is in charge of the decision making, don’t we just automatically win? CAN you win a mock draft?

Since your boy bleeds Underworld colors (figuratively, not literally), you know which way I lean. Let’s let the faithful readers decide for themselves.

I can’t even explain how much Treylon Burks’ 40 time doesn’t matter.

Larky: “More athletic/dynamic/younger version of Calvin Ridley as a prospect.”

Bennett: “He’s a versatile enough back to fit in any system, so team doesn’t concern me.”

Aaron: “Produced alongside Michael Pittman and Amon-Ra St. Brown before becoming a target hog in 2021.”

Ray: “Feel free to check out some of Noah Hills‘ awesome work over at Breakout Finder to see the case for Walker over Spiller in rookie drafts. Particularly this, this, and this.”

Trashman: “NFL-ready with a high floor.”

Ani: “Would love to see the Chargers take him at No. 17 as a Mike Williams replacement.”

Andy: “Austin Ekeler, but at at a Power 5 school.”

George Pickens is going to be everything we wanted from Terrace Marshall. There I said it. 😎😭

Shane: “All-around solid WR that has the talent to be a starter right away.”

Cody: “Part of me wanted to go RB, but I’m leaning draft capital, speed, talent, and opportunity with this one. Definitely going to want to trade out in my 2022 leagues.”

The only two players from Round 1 not ranked among PlayerProfiler’s top 12 rookies are David Bell and Jahan Dotson. They take the places of Jerome Ford and Brian Robinson, respectively. Though this sentiment technically goes against our rankings, it shows that you want to take your 2022 WRs early. An easy assessment from our end given the main pre-Combine focus of the Underworld admittedly being on the RB position. Noah Hills‘ extensive research shows us that the 2022 NFL Draft is starved for backs with complete skillsets. It also shows that Kenneth Walker > Isaiah Spiller, so we win the first round by virtue of that alone.

I kid, I kid. But seriously.

It’s up to us to find players that represent the oasis in the middle of this proverbial desert. Even if it means passing on a player like Robinson, a projected Day 2 pick, for a Jahan Dotson. On that note, please don’t swap Dotson and David Bell in your rankings because “40-time.” It will feel weird. But I promise you’ll thank me later. Although Dotson is great in his own right.

keep drooling over the burly treylon burks types, just leaves more jahan dotson for me. my type has always been more timothée chalomet or tom holland than dwayne johnson or jason momoa

Matt: “Second round Jerome Ford will be rare after he melts the Combine.”

Larky: “Almost every remaining RB/WR has question marks at this point, McBride is a Round 1 lock who just put up over 1,100 receiving yards.”

Aaron: “With a 16.0-percent Target Share in his final season, White’s receiving upside intrigues me.”

Ray: “I’m not letting RosterWatch nab all the high-end QBs. Score one for Team Underworld here 😎”

Trashman: “Limited production in college, but he looks like a special player. Too explosive.”

Andy: “Young boi Howell said if I don’t have Carter and Williams around me, I’ll put the team on my back and rush in this bish (please don’t end up being Baker Mayfield).”

Alex: “God damn it I was hoping McBride would fall (editors note: he didn’t).“

Cody: “I absolutely hate this pick, but the draft capital will be there. And at 2.12, I’m taking the risk that he is better than Kenyan Drake, which is likely.”

I know Alec Pierce ran super fast, played for an exciting 2021 Cincinnati squad, and went at 2.04 here. But I’m assuming PlayerProfiler’s No. 52-ranked rookie likely would’ve been at least available in the third round. Maybe even the fourth. That may be going out on a limb, but I certainly wasn’t taking him here. Though he did show some improvement as his college career progressed.

The Underworld did not dip their toes into the wide receiver waters in this round. We also let Matt Corral and Jalen Wydermyer fall into the third, so not great. Though they both were picked by Underworld-ers, so it’s fine.

Other than that, this round featured many of the expected names and draft slots. Brian Robinson falling to pick No. 24 is a steal even by our standards. It’s not even like we’re super low on him compared to the consensus. But at some point, we must answer the question of when the projected draft capital will outweigh whether or not he’s any good. If you’re a fan, I suggest you stay away from Noah’s article about him over at Breakout Finder.

WR Justyn Ross #Clemson on what part of his game translates best and who he models his game after?

Matt: “Watson the GOAT is mine!”

Larky: “Bama WR who should get Day 2 draft capital. Looks like he’ll be a productive NFL WR.”

I’ve had several people ask me to look into Strong. Typically I get to these in January/February, but got enough questions that I decided to do a thread.

Feel free to RT for all the Devy friends out there.

Aaron: “Towards the middle of the third round of a rookie draft, I’ll gladly take a QB that will be drafted in the first round of the NFL Draft.”

TE wise, Jalen Wydermyer coming in at a beefy 255 is intriguing. If he can get 4.75 or faster with that, it would be pretty significant and plenty of athleticism. One of the workouts I’m looking forward to most.

Trashman: “Lacks the size of Tolbert or Watson, but he may have been the more impressive WR at the Senior Bowl.”

Ani: “With his skillset and the “wideback” position growing in the NFL, no brainer for me here, even though he’s a smaller guy.”

Andy: “Move tight end that just puts up absurd stat lines at a program that wasn’t known for being proficient at passing.”

Alex: “Didn’t love him at the Senior Bowl. But watching his tape afterwards, hard to deny he was a damn productive SEC runner who can catch the football.”

Cody: “The Fall of Zeus ends at pick No. 36. Lead back size and talent. Will he get the draft capital? He thinks so.”

Is there any truth to the rumors that the Underworld single-handedly pushed Christian Watson‘s ADP into the late second/early third? Regardless, his early Day 3 projected draft capital may need to be edited after he melted faces at the Combine. Per ushe, the Underworld was ahead of the curve on this one. DRINK!

Jalen Wydermyer‘s draft positioning has been fascinating to track during this year’s rookie mocking process. PlayerProfiler’s rankings peg him as a mid-second round value, though I can consistently take him in the mid-to-late third. As good as Trey McBride is, it almost makes me want to pass on him in the early second in favor of an RB or WR if I have an early-or-middle-of-the-round selection to play with. For what it’s worth, consensus rankings at FantasyPros have Wydermyer listed as the TE1 and No. 13 overall player in the class. If our Big Board is any indication, he’s already accruing value as a potential second round draft pick. If he has a Watson-like performance, that draft capital projection will necessarily raise and we’ll need to start picking him earlier.

in my latest piece over at @breakout_finder, i look at whether we should be excited about the rb version of dwayne haskins: https://t.co/oJaoXGBwFk

Larky: “Early Day 3 draft capital is a potential for this ultra dynamic playmaker at WR.”

Aaron: “Quite the athlete at the RB position. I find myself continuing to push White up my board.”

the people ask me “you’re so pessimistic about this running back class, are there any players you actually like?”

the answer is yes, and the man is kevin fuckin harris.

Trashman: “Next best looking TE at the Senior Bowl to McBride.”

Alex: “I have a hard time understanding why literally nobody talks about Brooks.”

Shane: “He might have small hands (7 5/8). But if he dresses for special teams, it potentially gives him the opportunity to be on the field in the case of an injury.”

It’s flyer territory. Where we all find the players we file for early truther status on. Who among this group will shine? Who will never be heard from again after this exercise concludes? How thin IS the WR depth in this class, exactly? It’s thin enough that players ranked outside our top 50 rookies must be selected with picks in the 40s by the teams who don’t want to be shut out. Specifically Khalil Shakir and Braylon Sanders. Neither are featured on our Big Board. And while either or both may end up making a name for themselves, usually in this situation I default to the RB prospects that represent the previously mentioned oasis in the middle of this desert of an RB class.

Aaron : “JR RB from UTSA that’s put up 1200-plus yards from scrimmage and 20-plus receptions in each of his three seasons.”

Will anything about Ty Chandler stand out today at the NFL Combine?

After Cody ended the Fall of Zeus at pick No. 36, eight of the Underworld’s final 12 picks were RBs. This compared to only four RBs for RosterWatch in that same frame. This fifth round was the best representation of the dueling mindsets at play here. From 5.04 on, every RosterWatch pick was a WR and every Underworld pick was an RB. I can only speak for myself when considering how Noah Hills and his Rookie RB Efficiency series has helped me come to easy decisions regarding my later-round RB selections. I can only assume that RosterWatch feels they have a better handle on the WRs in this class than we do. That said, there are MANY RBs we like that weren’t drafted here, Max Borghi and Leddie Brown being two of my personal favorites.

there aren’t many players in this rb class with dominant production, workhorse size, quality efficiency, and prolific receiving usage.

leddie brown is one of them. a deep dive into his rushing efficiency profile over at @breakout_finder: https://t.co/fyNFTWiCiC

BIG steal for Aaron at pick No. 53, grabbing PlayerProfiler’s No. 27-ranked player Sincere McCormick. He’s our No. 10-ranked RB and was the RB21 (!!!) off the board here. While I like the players I selected, Kevin Harris and Tyler Goodson, more than McCormick, every player becomes a value at some point. Though there is a lot to like.

At the end of the day, I feel it my mission to help you all be as prepared as possible for your 2022 rookie drafts. But for those of you stuck in the TL;DR mindset, I’ll leave you with the RosterWatch and Underworld final rosters, and you can make your own decision as to who won (editors note: we did. Again. Drink!). We’ve got plenty more rookie mock recaps coming at you for 2022, but here’s a look at how things stand pre-Combine. 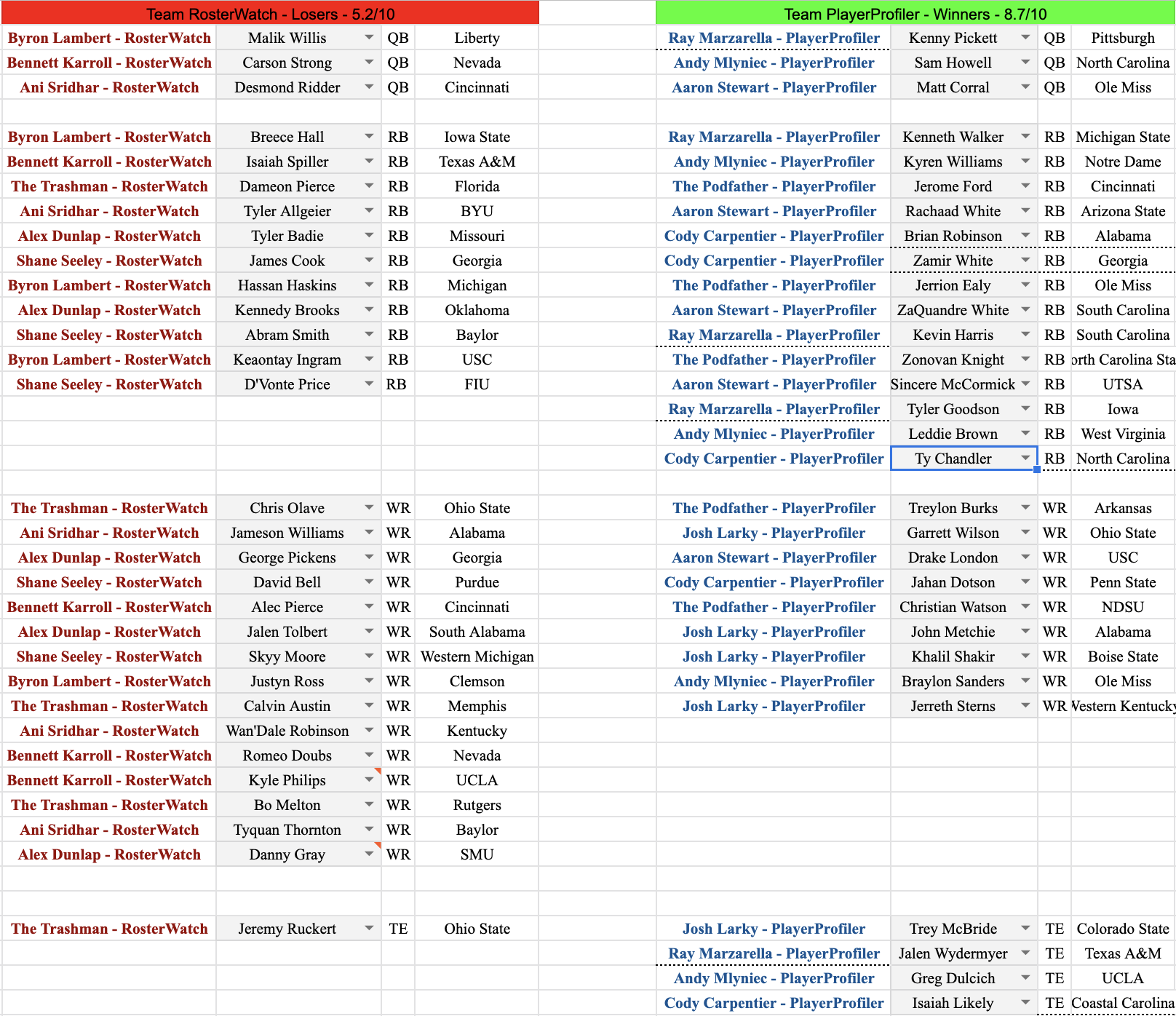