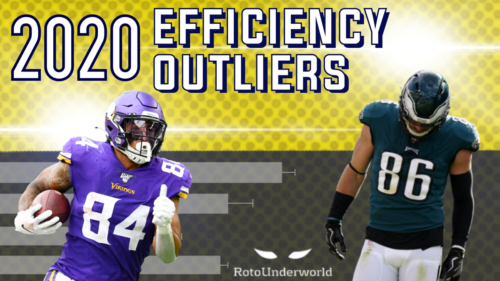 We’ve covered 2020 efficiency outliers at quarterback, wide receiver, and running back, so we’ll finish off with everyone’s favorite position – tight end. As always, we’ll analyze these players using PlayerProfiler’s advanced opportunity, productivity, and efficiency metrics to see what we can expect in 2021. Of course, we can’t go without touching on dynasty values based on the Dynasty Deluxe Rankings since we’re in the heart of the NFL offseason nearing the 2021 NFL Draft.

We can’t discuss efficiency outliers at tight end without talking about Robert Tonyan, otherwise known as Big Bob Tonyan: the Touchdown Scoring Machine. His 2020 screamed efficiency with unsustainable production. He earned 59 (No. 24 among qualified tight ends) Targets, a 12.9-percent (No. 19) Target Share, 443 (No. 23) Air Yards, and a 12.7-percent (No. 20) Air Yards Share. He ended up logging 52 (No. 13) Receptions for 586 (No. 13) Receiving Yards and 11 (No. 1) Total Touchdowns (21.2-percent Touchdown Rate). That’s crazy touchdown efficiency since he scored a touchdown in nine out of 15 games, with three touchdowns on six receptions in Week 4 against the Falcons.

Highest QB Rating when Targeted in 2020 ⚡

The other efficiency metrics backed up the uber-efficiency, including a 9.9 (No. 3) Yards Per Target average, +61.3 (No. 1) Production Premium, and 2.99 (No. 1) Fantasy Points per Target. Aaron Rodgers‘ efficiency directly contributed to Tonyan’s. Since Rodgers is an elite quarterback, maybe Tonyan keeps up the efficiency with hopes of the opportunities increasing in 2021. Often the tight end position proves quite volatile outside of Travis Kelce, George Kittle, and Darren Waller. On the Dynasty Deluxe Rankings, Tonyan ranks No. 170 overall in SuperFlex leagues near Anthony McFarland and Devin Singletary. If other fantasy managers value him highly, trade him away after his uber-efficient and productive 2020 season.

I faded Tyler Higbee heading in 2020 and he ended up averaging 8.4 (No. 22) Fantasy Points per Game with 44 (No. 19) Receptions, 522 (No. 17) Receiving Yards, and five (No. 13) Total Touchdowns (11.1-percent Touchdown Rate). With Matthew Stafford at quarterback and Gerald Everett with the Seahawks, Higbee’s stock should rise slightly. He should earn more targets and opportunities with Everett out of town, but the offense still runs through Cam Akers, Robert Woods, and Cooper Kupp with that elite defense. 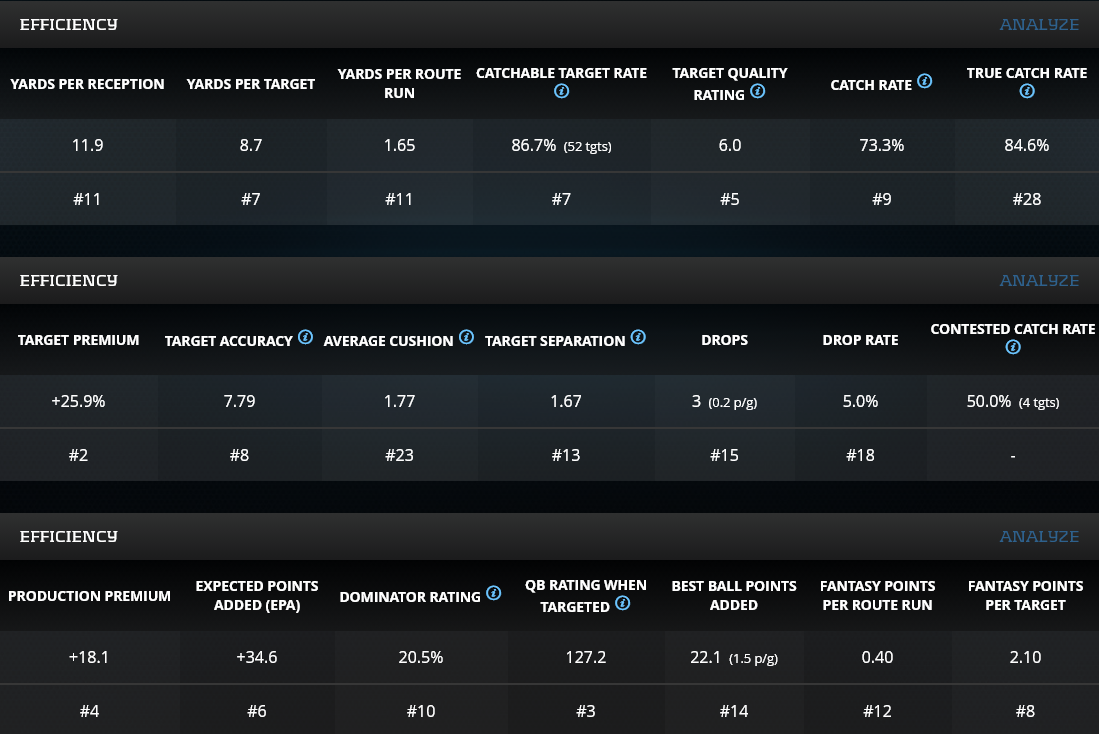 With Kyle Rudolph now on the New York Giants, stock up for Irv Smith as Minnesota’s TE1. Smith ranked highly in our efficiency metrics, although he received few opportunities. The Vikings offense ran through Dalvin Cook, Justin Jefferson, and Adam Thielen, with efficient play by Kirk Cousins. Smith earned 43 (No. 33) Targets, an 11.6-percent (No. 27) Target Share, 355 (No. 29) Air Yards, and an 11.7-percent (No. 23) Air Yards Share. He produced a lowly 30 (No. 31) Receptions and 365 (No. 27) Receiving Yards with five (No. 13) Total Touchdowns (16.7-percent Touchdown Rate).

Smith didn’t play enough for his +15.0 Production Premium to qualify for an official rank, but he finished near George Kittle and Cameron Brate. Meanwhile, he averaged 8.5 (No. 8) Yards Per Target and 2.24 (No. 2) Fantasy Points per Target, yet only averaged 0.34 (No. 23) Fantasy Points per Route Run. We expect his opportunities to increase in 2021, but how much remains the big question since the team averaged 34.8 (No. 25) Team Pass Plays Per Game with a 2.22 Pace of Play that ranked in the bottom half of the league. Kirk Cousins increased his pass attempts in the second half, so there’s the potential for Smith earning more opportunities in 2021.

Ertz’s 2020 efficiency metrics are brutal. He averaged 4.7 (No. 40) Yards Per Target and logged a -37.0 (No. 26) Production Premium. He also averaged a miserable 0.21 (No. 38) Fantasy Points per Route Run and 1.05 (No. 40) Fantasy Points per Target. Rumors surfaced in the middle of March that the Eagles are looking to trade him away, but they haven’t found a team to ship him to yet. After a dominant 2019 where he ranked top-4 in Receptions, Receiving Yards, and Fantasy Points, he’s taken quite the fall.

Since Ertz’s stock has plummeted, he’s more of a buy-low than a sell, but don’t acquire him with the expectation of a top-5 season. Was it injuries or signs of decline in 2020? The Dynasty Deluxe Rankings have him ranked No. 206 overall in SuperFlex near Blake Jarwin and Sony Michel, both coming off of lost 2020 seasons. If he lands in a tight-end friendly offense, Ertz could still produce like a top-10 tight end given the landscape. If he stays in Philadelphia, this dings the value of Dallas Goedert. Don’t just sell to sell, but it’s worth shopping to see if his name value nets you anything in dynasty leagues. He likely has one or two more productive years in him.

Here’s a trivia question – who led the New York Giants in targets in 2020? If you guessed Darius Slayton or Sterling Shepard – that’s incorrect. None other than tight end Evan Engram led the Giants in a number of opportunity and productivity metrics. Engram ranked No. 8 or better in Targets, Target Share, Air Yards, and Air Yards Share, but averaged just under 9.0 Fantasy Points per Game. Daniel Jones fed him with targets and he ended up being a PPR machine with 63 (No. 5) Receptions and 654 (No. 8) Receiving Yards, yet only scored two (No. 35) Total Touchdowns. He finished top-15 in eight out of his 16 games played, yet averaged under 5.0 Fantasy Points per Game in 50-percent of his games. 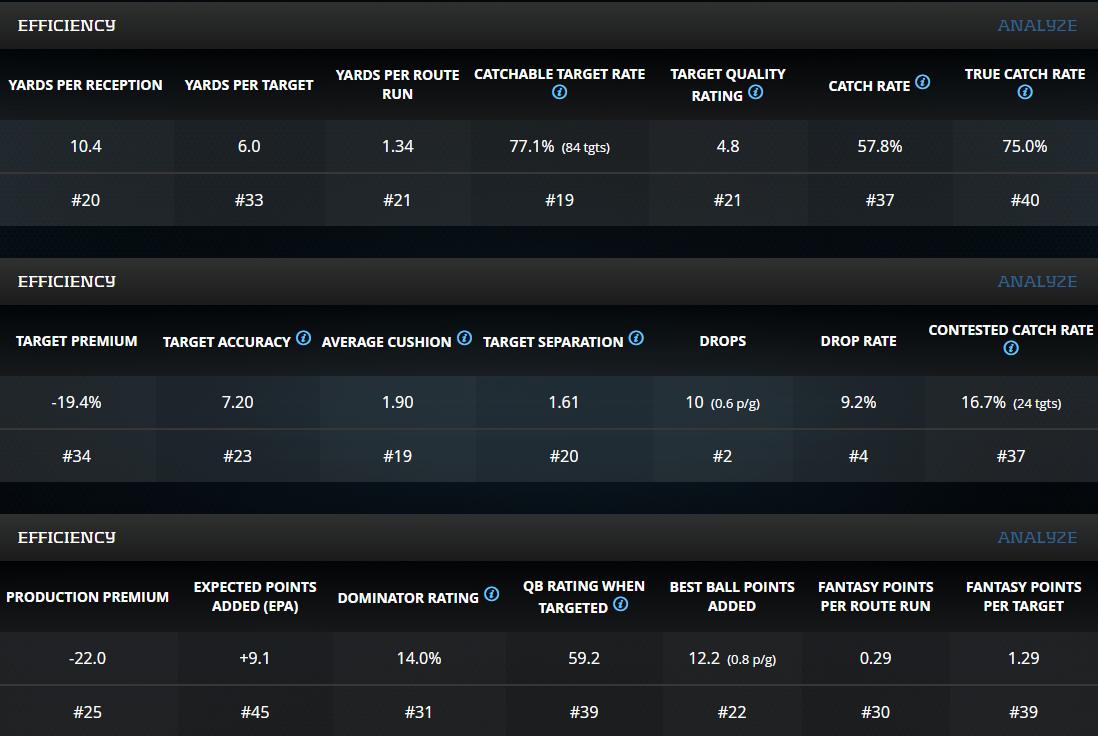 After taking away looks from Irv Smith, Kyle Rudolph lands with the Giants on a two-year deal worth $14 million. Thy also signed alpha receiver Kenny Golladay to a four-year, $72 million deal. Both Golladay and Rudolph will eat into Engram’s opportunities, meaning he’ll need to rely on efficiency unless other pass-catchers lose opportunities instead. In 2019, the Giants averaged 40.6 (No. 7) Team Pass Plays Per Game with a 2.32 Pace of Play. Then in 2020, they averaged 35.4 (No. 24) Team Pass Plays Per Game and a 2.23 Pace of Play.

A few notable differences from 2019 to 2020 involved a new head coach in Joe Judge and Saquon Barkley‘s injury. It’s a contract year for Engram in 2021, and his dynasty value takes a hit with a ranking of No. 180 overall near notable players in Logan Thomas, Alexander Mattison, and Phillip Lindsay. In theory, Engram could end up third or fourth on the team in Targets behind Golladay and Barkley, but we need the passing volume to increase and for Jones to improve his efficiency and production. Hopefully, the added offensive weapons help out.

If you waited for the Logan Thomas breakout in 2020, then hopefully you reaped the rewards in the second half. What a quarterback carousel for the Washington Football Team with four different quarterbacks passing the ball throughout the year. Thomas met a ton of the opportunity and athleticism thresholds, which made him a prime breakout tight end option. When looking at his PlayerProfiler page, he boasts a 112.1 (91st-percentile) Speed Score at 6-6 and 248-pounds. Thomas recorded 110 (No. 5) Targets, a 19.2-percent (No. 7) Target Share, 780 (No. 7) Air Yards, and a 21.1-percent (No. 7) Air Yards Share. Those opportunity metrics eventually translated to fantasy production.

Alex Smith played quarterback for most of the season’s second half, which helped with Thomas’ production. In the first half, he looked like the definition of process over results, and thankfully he produced the results we waited for with 72 (No. 3) Receptions, 670 (No. 7) Receiving Yards, and 11.0 (No. 6) Fantasy Points per Game. In terms of efficiency, Thomas averaged 6.1 (No. 31) Yards Per Target with a -8.4 (No. 19) Production Premium and 1.61 (No. 24) Fantasy Points per Target. However, he had a 27.6-percent (No. 3) Dominator Rating, which tells us he produced over 27-percent of the team’s total receiving yards and receiving touchdowns.

Thomas relied on volume yet lacked efficiency, but that’s fine since it translated to production. He ranks No. 179 right next to Evan Engram in the Dynasty Deluxe Rankings. The addition of Ryan Fitzpatrick should help the value of Thomas, Terry McLaurin, Curtis Samuel, and Antonio Gibson. However, with a better quarterback also comes more competition with the addition of Samuel. That said, Thomas could produce as a top-12 tight end or better in 2021.