When there is so much going on, what should fantasy gamers and sports fans focus on? This is the question I will answer for you in this series of articles entitled, “Lessons Learned.” Here are the lessons we learned in Week 4 of the NFL season.

1) Law of Preservation of Targets

Like the falling leaves from the trees, every fall, it’s the same story – the Detroit Lions have no defense. On script in 2022, the Lions headed into Week 4 among the most generous in both Yards and Points Allowed. With Week 4 foe Seattle also showing little defensive resistance, this game was going to be a shootout.

With three of Detroit’s top offensive weapons out – Amon-Ra St. Brown, D.J. Chark and D’Andre Swift, their 21 weekly targets had to go somewhere. In Week 4, they went to T.J. Hockenson who put up a tight end week for the ages. On a career-high 12 targets, he posted 179 yards and two scores. Even WR Josh Reynolds, former Rams buddy of Jared Goff, carried a share of the load with seven catches for 81 yards and a score. Of course, PlayerProfiler’s weekly projections told you beforehand that both would shine.

Action: Rely on PlayerProfiler’s projections to incorporate matchup, injury and target data for you. Though Hockenson sat No. 14 in tight end Fantasy Points per Game after three weeks, we ranked him as Week 4’s TE No. 4. We ranked Reynolds as a WR2 despite his coming into Week 4 as WR51 with 10.7 Fantasy Points Per Game.

Just about everyone in the fantasy football world should move Clyde Edwards-Helaire off their fantasy teams. The metrics suggest the same thing. His 2022 output is simply not sustainable. His Snap Share has fallen every year – from 59-percent as a rookie to 51-percent to 41-percent (No. 43) through Week 3 of 2022. His Red Zone Snap Share has also declined – from 61-percent to 42-percent to 29-percent. Yet, there he sat heading into Week 4 with 17.7 (No. 4) Fantasy Points per Game. High output on low volume is not sustainable.

But, before we move on, other metrics show hidden value and a nice floor. While his Route Participation has remained steady between 35- and 45-percent each year, his 2022 30.8-percent Target Rate (Targets per Route Run) is more than twice his 2021 rate. Edwards-Helaire is earning Patrick Mahomes and Andy Reid’s trust in the passing game. And while he famously struggled in the red zone as a rookie (just an 11-percent Red Zone TD Conversion Rate), his success rose to 35-percent in Year 2 and sat at 60-percent going into Week 4 of 2022. On Sunday night, his first two red zone touches resulted in TDs. Despite modest volume, Edwards-Helaire’s 4.47 (No. 2) Yards Created per Touch bests Jerick McKinnon‘s 2.75 (No. 23) and dwarfs Isiah Pacheco‘s 0.59 (No. 56).

While he’ll never be a bell cow, Edwards-Helaire has finished as an RB2 or better in 10 of his last 11 regular-season games. I’ll take that floor from my RB2 every time.

Action: If others want to sell high on Clyde Edwards-Helaire, I’ll stand alone to say go ahead and buy lower than you should. He’s not perfect, but I’ll be glad to take a reliable cog in a great wheel off their hands.

Congrats to Dameon Pierce who broke out with 139 rushing yards and a score against a tough Chargers run defense. 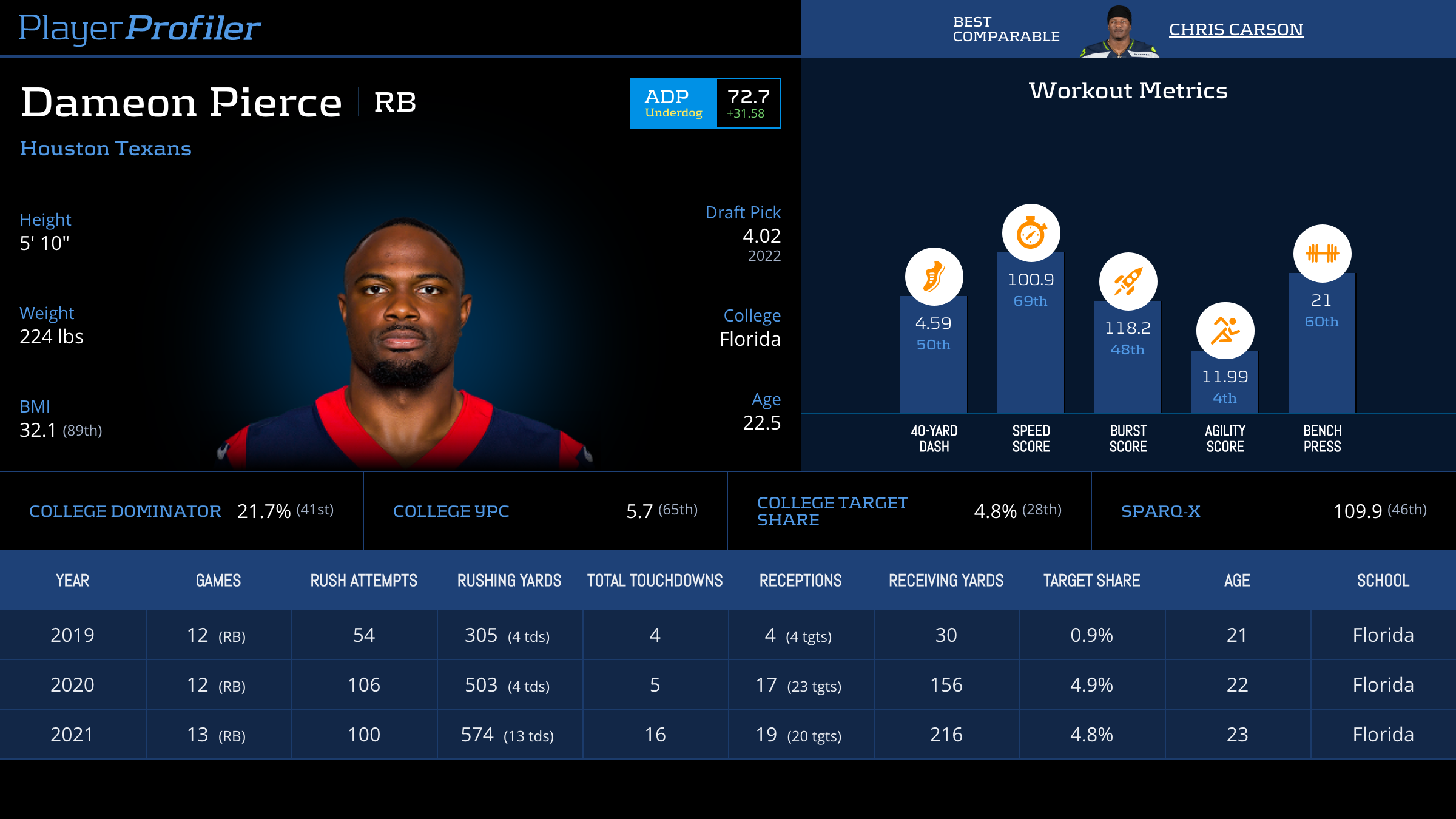 Player Profiler projected Pierce as a Week 4 RB1, and he lived up to that billing. Pierce put up 139 yards and a score on just 14 carries. He also caught six of six targets for 25.9 PPR Fantasy Points for his second-consecutive RB1 week. He saw 100 percent of Houston’s Week 4 carries.

Just last week, I wrote that Mitchell Trubisky didn’t have much time left as Pittsburgh starter. What I didn’t know was that it’d be 30 minutes. After seeing Mitch throw for 84 yards and a pick in the first half of Sunday’s game against a weak Jets’ pass defense, the Steelers brain trust had seen enough. They turned to Kenny Pickett who immediately brought life to the Steel City. Pickett completed 10 of 13 throws for 120 yards and rushed for two scores. Unfortunately, the three Pickett attempts not caught by the Steelers were picked by the Jets. They weren’t all his fault. Two of the interceptions bounced off Steeler hands, and the third came on a game-ending Hail Mary. Though the Steelers have a brutal upcoming schedule, Pickett time is now.

In Green Bay, New England’s QB3, Bailey Zappe, saw Week 4 action when Mac Jones‘s backup Brian Hoyer was knocked out early. Zappe filled in admirably against one of the league’s toughest defenses and will have the pleasure of facing the Lions in Week 5 should Jones remain out.

Also check your waiver wire for these:

Action: It is especially key in superlex, 2 QB, and dynasty to stash rookie QBs.

5) Run Everyone vs Detroit

Heading into Week 4 this year, the Lions were giving up 5.0 yards per carry (No. 27) and were the only defense whose opponents averaged more than two rushing scores each week. Their Week 4 opponent, the Seahawks, came in with one of the league’s worst rushing attacks. Supported by a No. 38 Run Blocking Rating, lead rusher Rashaad Penny headed into Sunday’s game No. 30 or lower in Yards Created, Evaded Tackles, Juke Rate, Dominator Rating and Fantasy Points per Game.

Something had to give. On Week 4, the Lions were just the tonic Penny and Seattle needed. On just 17 carries, Penny posted 151 yards and two scores. As a team, the Seahawks piled up 235 yards and three scores.