After missing the majority of the preseason with a hand injury, D.J. Chark appeared to be the Jaguars primary passing target in Week 1, seeing 12 targets. Unfortunately, he caught three of these targets for 86 receiving yards leaving most of his Air Yards unrealized. As Chark and rookie Trevor Lawrence are likely working through some chemistry issues, Chark remains a intriguing DFS play as he is only $100 in price away from making the value list. Up against a strong Denver secondary in Week 2, he makes for an interesting contrarian pay in tournaments.

CeeDee Lamb‘s second year ascension into a fantasy star took a great leap forward in Week 1. Lamb saw 15 targets and amassed seven receptions for 104 receiving yards and a touchdown. He finished as the WR13 on the week. With Michael Gallup out for Week 2 and longer, the Dallas Target Share is set to consolidate to Lamb’s benefit. At $6,400, this may be cheapest you will be able to get him moving forward since he had more Air Yards than Week 1’s WR1 overall, Amari Cooper.

The Mac Jones led Patriots passing game skewed more pass heavy than some may have expected with the Pats passing 39 times in Week 1. A major beneficiary was newly acquired Nelson Agholor, who lead the team in Air Yards. Agholor, who finished as the WR22 in week 1, maintains a modest price on DraftKings. Facing off against the Jets in Week 2, Agholor is the New England wide receiver with the best bet to be a top 24 receiver again, and serves as a great cash game play.

Marvin Jones made the value list last week and did not disappoint. He finished as the WR21 on the week. While he finished second in targets behind D.J. Chark, Jones outscored Chark on the week, and was more efficient with his opportunities posting a +2.2 (No. 49 among qualified wide receivers) Production Premium. If Chark’s inefficiencies continue, look for Jones to overtake him as the Jaguars primary downfield target. Regardless, Jones remains a viable play this week in all formats despite a tough matchup against Denver’s secondary.

Third year receiver K.J. Osborn emerged as the Vikings third receiver in Week 1 seeing nine targets finishing as the WR34 on the week. While he amassed 80 Air Yards in Week 1, seven more yards than Adam Thielen, Osborn remains behind Thielen and Justin Jefferson in the target pecking order. Just $300 more than the minimum price on Draftkings, Osborn is a great cash play against an Arizona Cardinals secondary that, despite good Week 1 results, remains thin. 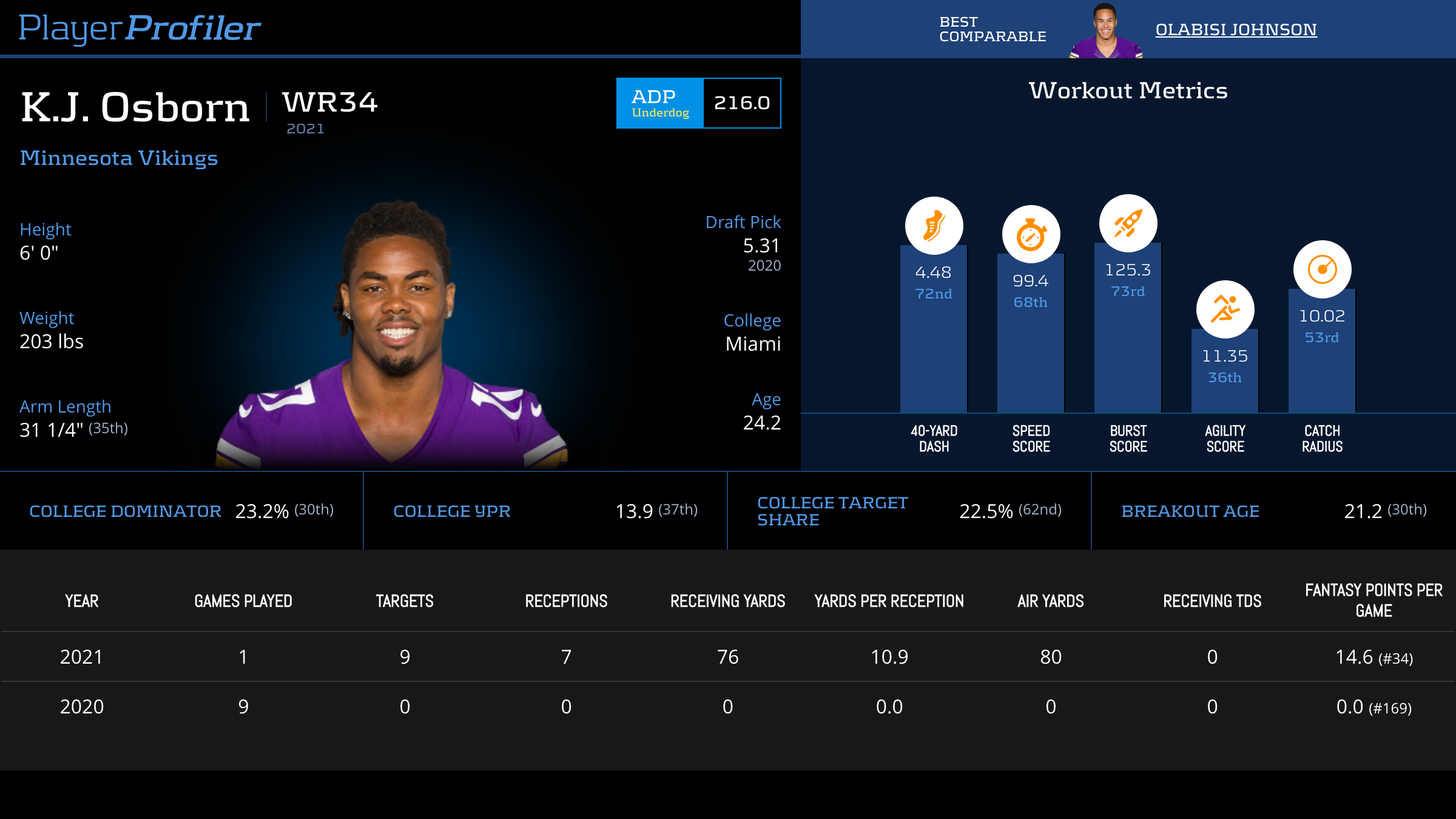 Elijah Moore had a less than stellar debut finishing with -3 receiving yards. Despite accumulating less yards than he would have had if he didn’t play, the ancillary stats point to better days ahead for the hyped rookie. Moore was behind only Corey Davis in Air Yards and finished Week 1 with 96 (No. 6) Unrealized Air Yards. He also did not line up exclusively in the slot seeing only 24.5-percent of snaps from the slot position. However, both Jamison Crowder and Keelan Cole are set to return to the Jets receiving corps in Week 2. Therefore, Moore remains only a dart throw in tournaments until we see how opportunities play out with the team at full strength.

The slender rookie set aside any concerns regarding his ability to play at the NFL level at his size in his Week 1 debut. Finishing as the WR19 for the week, Devonta Smith was the Eagles primary receiver seeing the most targets on the team and a whooping 55.2-percent (No. 3) Air Yards Share. He has a less than inspiring matchup against the 49ers in Week 2 which might limit his upside, however, he remains a strong play in all formats.

The preseason narrative of Corey Davis as the Jets alpha WR1 was confirmed in Week 1 with his leading the Jets in receiving with 97 yards and two touchdowns. Davis finished as the WR5 on the week amassing 26.7 fantasy points. This week he faces a stout Patriots defense however, he remains a strong play in cash formats because of his high target floor.

Van Jefferson likely shocked many fantasy gamers when he hauled in an 67-yard bomb in the early moments of the Rams’ Week 1 win over the Chicago Bears. What is perhaps even more shocking is the second year receiver ran just as many routes (21) as veteran fantasy stalwart Robert Woods, and out gained the perennial top 24 fantasy receiver in Air Yards (87 to 25). While this may be more of a noise than a trend, Jefferson remains a viable dart throw in tournaments in the event of an unlikely second year breakout.

After an training camp season filled with doubt that Ja’Marr Chase would play a full complement of snaps to start the season, the first round pick led the Bengals receiver’s in Pass Snaps last week. Additionally, he led the team in targets and Air Yards, parlaying this opportunity into a WR15 finish. Chase, along with second year receiver Tee Higgins, appear to be the 1A and 1B in the Bengals passing attack. Set to face a Bears defense that was recently torched by the Rams, Chase appears to be in a smash spot and is a recommended play in all formats. 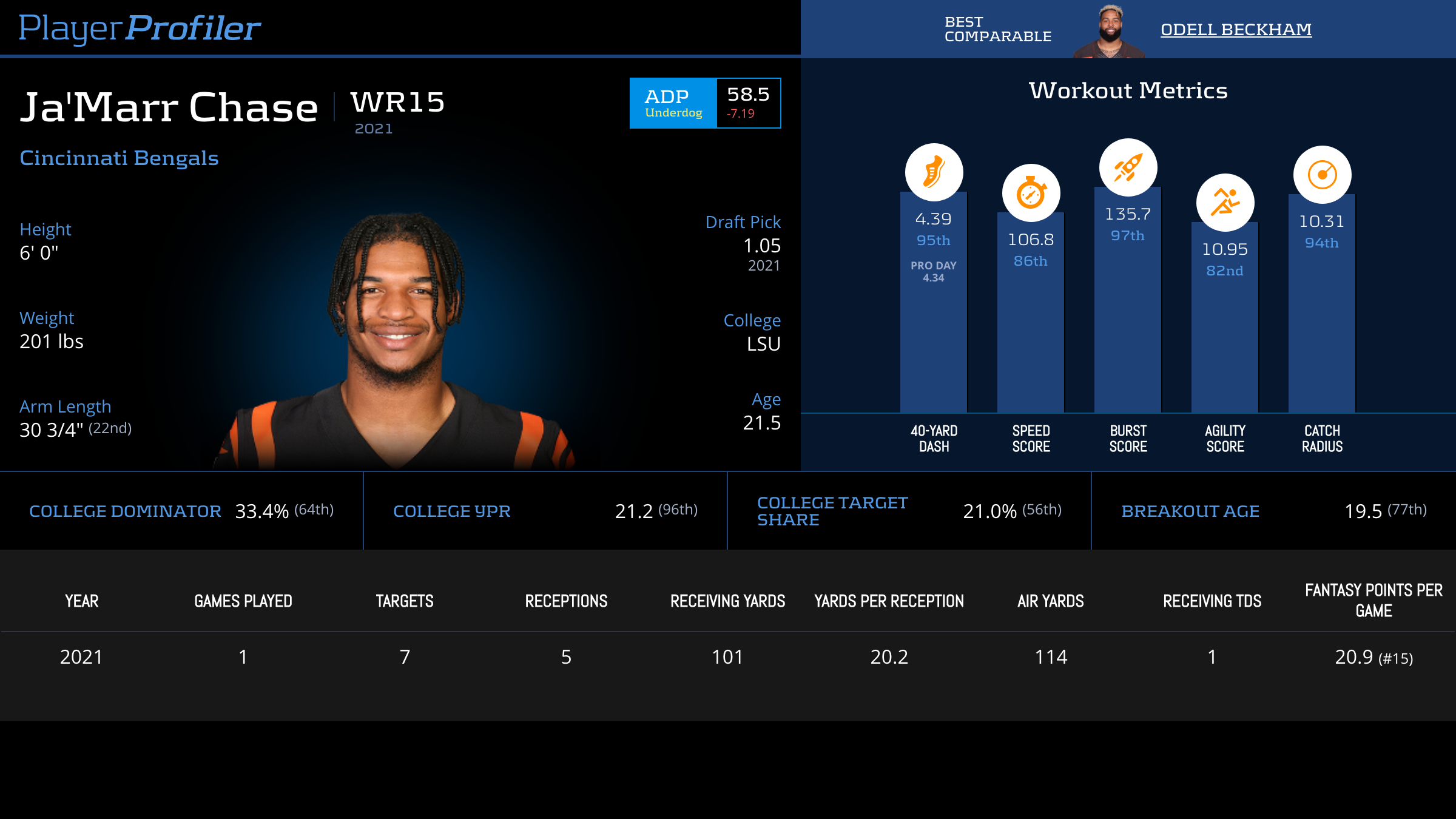 Anthony Schwartz split snaps with Donovan Peoples-Jones in his rookie debut, being out-snapped 25-17 in Pass Snaps. However, the burner rookie out-scored Peoples-Jones, amassing 11.6 fantasy points. Schwartz and his 4.32 Pro Day-adjusted 40-Yard Dash time, was the clear downfield downfield threat for the Browns last week, posting a 25.2 Average Target Distance mark. With Odell Beckham out again this week, and Cleveland set to square off against an exploitable Houston Texans secondary, Schwartz makes for an ideal cost saving play in tournaments.

Good luck to everyone in Week 2. May all your Air Yards be realized.