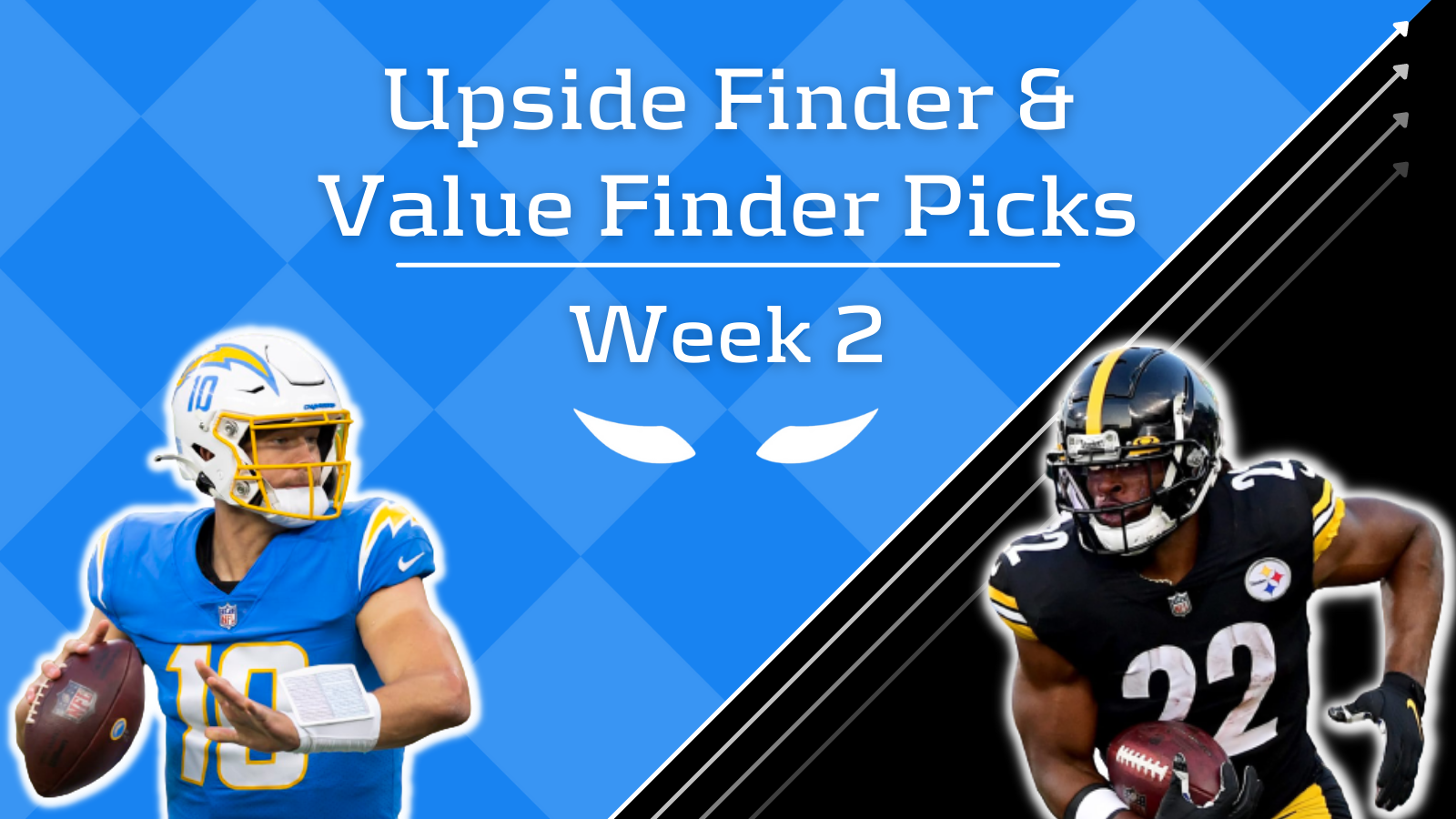 In case you missed it, PlayerProfiler has debuted a few shiny new DFS tools. On top of our usual GPP Lineup Genius, we’ve added a Cash Game Optimizer and an Underdog Pick Generator. The final two additions to the DFS tools roster, and the focus of this weekly piece, are the UPSIDE FINDER and VALUE FINDER tools. The VALUE FINDER generates a Value Rating based on a player’s salary and projected point total on either DraftKings or FanDuel. The UPSIDE FINDER generates an Upside Rating based on a player’s salary, projected point total, AND their Upside Projection on either DraftKings or FanDuel.

Each week, you’re cordially invited to join ya boy Double R, Ray Ray Marz (editors note: your new hero, your party host, and your Editor in Chief here at Underworld Enterprises) as I take you through some of the best Week 2 DFS plays highlighted by the UPSIDE FINDER and the VALUE FINDER.

As mentioned in Volume II of The Pareto Principals, this week’s lineups need to be constructed around whether this Cowboys-Chargers game will be the focus. A high projected point total, a top-10 Pace of Play after one week, and all of his pass-catchers enjoying favorable matchups makes Justin Herbert a worthwhile focal point in Week 2 lineups. Especially with more projected points than Dak Prescott at $100 cheaper on DraftKings.

On FanDuel, with its half PPR scoring, we’re more inclined to plug a player like Najee Harris; especially when he goes up against a Raiders defense that won’t be fully rested and ceded many rushing yards to Baltimore in Week 1. But that doesn’t mean he won’t be a value on DraftKings priced at $6,300. At least until and unless he flops in this dream draw, we care more about the 98.2-percent (No. 1 among qualified running backs) Snap Share and 100.0-percent (No. 1) Opportunity Share more than we care about the -42.6 (No. 89) Production Premium.

Don’t let the counting stats fool you, Adam Trautman was New Orleans’ TE1 by usage last week. Juwan Johnson just happened to grab two touchdowns on a 13.8-percent (No. 79) Snap Share and a 27.3-percent (No. 1) Hog Rate. Captain America was the one with top-5 marks in Target Share and Target Rate. And if Jameis Winston is truly for real, Trautman is a massive value at the stone minimum $3,000 on DraftKings.

Anthony Schwartz, priced at a mere $3,300 on DraftKings also has this week’s No. 2-ranked Upside Rating (5.36). A Week 1 Air Yards standout , Schwartz draws a favorable matchup against Houston’s Vernon Hargreaves in a game where Odell Beckham will again be absent. He makes for a good naked, salary-saving play.

Given the allure of sexier on-paper matchups, this Buffalo-Miami game represents an interesting pivot point for Week 2 DFS tournaments. And with both Stefon Diggs and Emmanuel Sanders locking up with top-15 cornerbacks, the stage is set for a vintage two-score Cole Beasley performance as he goes up against No. 47-ranked Nik Needham. At $4,600, he’s another potential naked, salary saver (editors note: not that there’s anything wrong with that).

We wrap things up with a trio of salary-saving WR upside plays. Bryan Edwards draws the toughest matchup of the three in Joe Haden, but his plus efficiency and clutch performance when called upon this past Monday night make him a confident dart throw at only $3,700.

As I continue to regret not taking a home pre-Week 1 home league trade that would have netted me Jaylen Waddle, I find myself super tempted by his price ($4,500), matchup (vs. No. 50-ranked cornerback Levi Wallace), and the continued absence of Will Fuller in a game with sneaky shootout potential.

Former wind-sprinting extraordinaire Jalen Guyton draws Dallas’ Anthony Brown, PlayerProfiler’s No. 118-ranked cornerback, in a game that many fantasy gamers will be trying to hoard as many playable pieces as possible from. Because he’s not an injury fill-in like Cedrick Wilson, he makes for a better dart throw at his $3,100 salary.

Jared Cook was top 5 in the NFL in slot snaps..

Warming to LAC-DAL game stacks with the plethora of options