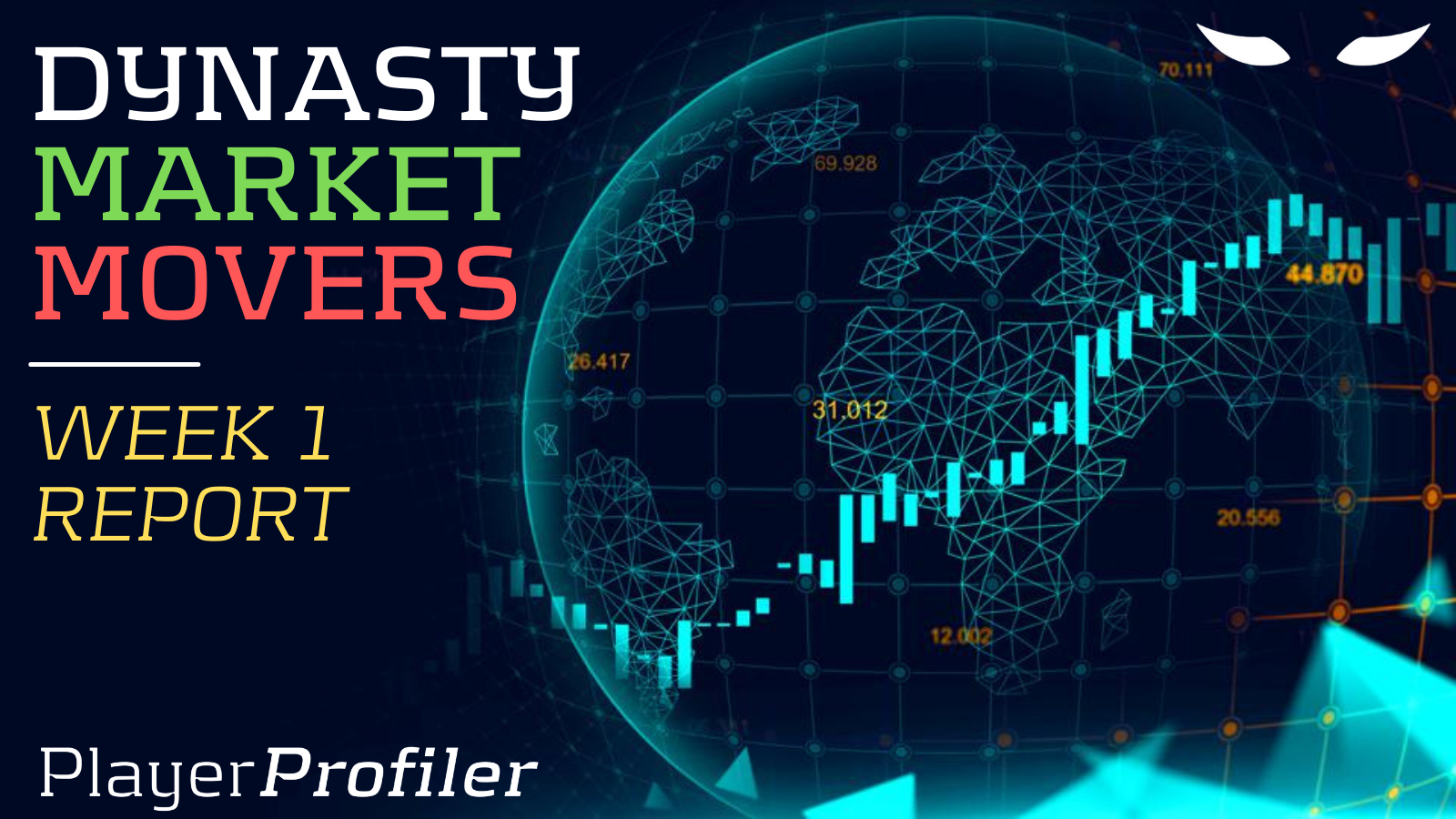 Dynasty Market Movers returns for the 2021 season. Welcome back!

For first time readers, here’s the mandate. Monitor the NFL’s week-to-week events and leverage PlayerProfiler’s advanced stats and metrics to feature players moving on the dynasty rankings. From there, use that insight to gain an edge in dynasty leagues by knowing which players to be “bearish” and “bullish” on. We won’t waste time stating the obvious. Everyone knows that Patrick Mahomes is a premium asset. With that said, here are the Week 1 movers.

Tyrod Taylor finished Week 1 as a back-end QB1. Yes, a QB1. He looked good completing 21 of 33 pass attempts for 291 yards and two touchdowns. He averaged a solid 8.8 (No. 8 among qualified quarterbacks) Yards Per Attempt and made 4 (No. 4) Money Throws. Taylor tacked on 40 rushing yards on four carries with one in the red zone.

Generally dismissed heading into the fantasy football season (ADP 215), the 32 year-old gains 6.51 Lifetime Value points (the most of any QB) and moves up six spots to QB32 on PlayerProfiler’s dynasty rankings. If T-Mobile keeps rolling, dynasty managers that stashed him in SuperFlex and 2QB leagues found themselves a fantastic bargain.

Elijah Mitchell impressed early in rookie camp, but the hype cooled. He exploded back on to the scene against the Lions. The former Ragin’ Cajun has 4.40 (97th-percentile) speed with upper-percentile burst and agility. Should anyone really be surprised by his 16.4-point (No. 15) fantasy day?

With Trey Sermon inactive and Raheem Mostert suffering a season-ending knee injury, Mitchell saw an 82.6-percent Opportunity Share. He produced a True Yards Per Carry Rate of 4.9 (No. 13) with 7 (No. 4) Evaded Tackles and a 36.8-percent (No. 5) Juke Rate. It’s fully expected that the 49ers will involve multiple RBs, but Mitchell is the best athlete of the group. The Niners are also likely to face plenty of positive Game Script. The sixth-round pick gains a whopping 50.46 Lifetime Value points and vaults 22 spots to RB33.

Here’s the skinny on Devonta Smith (editors note: that was clever, I approve). In Week 1, he led the Eagles in receiving, hauling in six of eight targets for 71 yards and a touchdown. The WR2 on PlayerProfiler’s Rookie Rankings through the majority of the offseason, Smith scored 19.1 fantasy points (WR19) versus the Falcons. This trailed only Ja’Marr Chase for rookie WR fantasy output.

Smith played on 80.9-percent of snaps (16.4-percent slot rate) with a healthy 25-percent (No. 17) Target Share. The most targeted rookie wideout during the opening slate of games accrues the most WR Lifetime Value points and climbs to WR16.

On the surface, second-year TE Cole Kmet appeared to have an average fantasy day versus the LA Rams (9.2 fantasy points, TE18). Digging deeper, he played on 71-percent of snaps ending the game tied with Darnell Mooney for second on the team with seven targets. He ran 24 routes (No. 13) with a 17.5-percent (No. 11) Target Share.

Jimmy Graham was the only other TE targeted (2 targets), seeing the field on just 27.5 percent of snaps. With a QB upgrade to Justin Fields inevitable, the outlook for Kmet appears promising. The Bears’ 2020 second round pick, rises six spots to TE16 and is knocking on the door of TE1 status.

Those who tuned into Top-10 (or more) Takeaways already know that The Podfather is worried about Tua Tagovailoa. The stock of the former fifth overall selection reflects this with a six spot drop. He loses 10.23 Lifetime Value points (the most of any QB not named Ryan Fitzpatrick) and lands outside of the Top 20.

Miami inched by the Patriots 17-16, but Tua was anything but sharp. Looking past the box score we find 4 (No. 3) Danger Plays and 4 (No. 4) Interceptable Passes. Tagovailoa had an abysmal 37.3 (No. 31) True Passer Rating and a 7.0 (No. 24) Accuracy Rating. Hopefully Tua can right the ship as soon as Week 2. If not, more shivers will be running down our spines.

Zack Moss‘ exclusion from the Bills’ opening day roster due to “numbers” has since been revised to being health-related (he underwent offseason ankle surgery). Regardless, neither explanation is positive for his fantasy value.

drafting a plodder like zack moss based on process of elimination (devin singletary also stinks) never felt good, but i did it anyway.

i was wrong. i’m sorry. pic.twitter.com/B6Dfy9fvpH

Moss could return to action in Week 2, but faces hurdles to making a significant fantasy impact. Don’t expect him to seize the lead back role in Buffalo any time soon. He’ll surely share snaps with Devin Singletary (at minimum) who rushed for 72 yards and caught three passes for eight yards against a stout Steelers defense. Moss loses 11 spots to fall from RB33 to RB44 on PlayerProfiler’s dynasty rankings.

The conditions appeared set for Michael Pittman to assert himself as the Colts’ alpha receiver versus the Seattle Seahawks. Instead he ended the contest fourth in team targets trailing Jonathan Taylor, Nyheim Hines, and Zach Pascal.

Pittman enjoyed a 97.2 (No. 3) Snap Share and ran 39 (No. 18) routes, yet earned only 4 (No. 68) targets. He turned this into a measly three receptions for 29 yards, good for a WR79 performance. His dynasty stock takes a hit, dropping from a rank of WR53 to WR62. Pittman (who is now questionable) will be difficult to trust versus the Rams in Week 2.

The chances of moving Eric Ebron off dynasty rosters for any sort of return looks bleak at this point in time. His stock continues to trend down after Week 1 dropping another 11 spots to TE38. Ebron caught one of two targets for 19 yards against the Bills. He played on 47.3-percent of the snaps (No. 45) and ran 15 routes (No. 29).

If that wasn’t bad enough, rookie Pat Freiermuth also played 47.3-percent of the snaps. He caught one pass for 24 yards. Freiermuth’s role should continue to grow as the season progresses. Combined this with a loaded roster of pass catching talent, and it spells bad news for Ebron. Those who still roster the veteran in dynasty can old hope for a touchdown streak and an opportunity to sell.