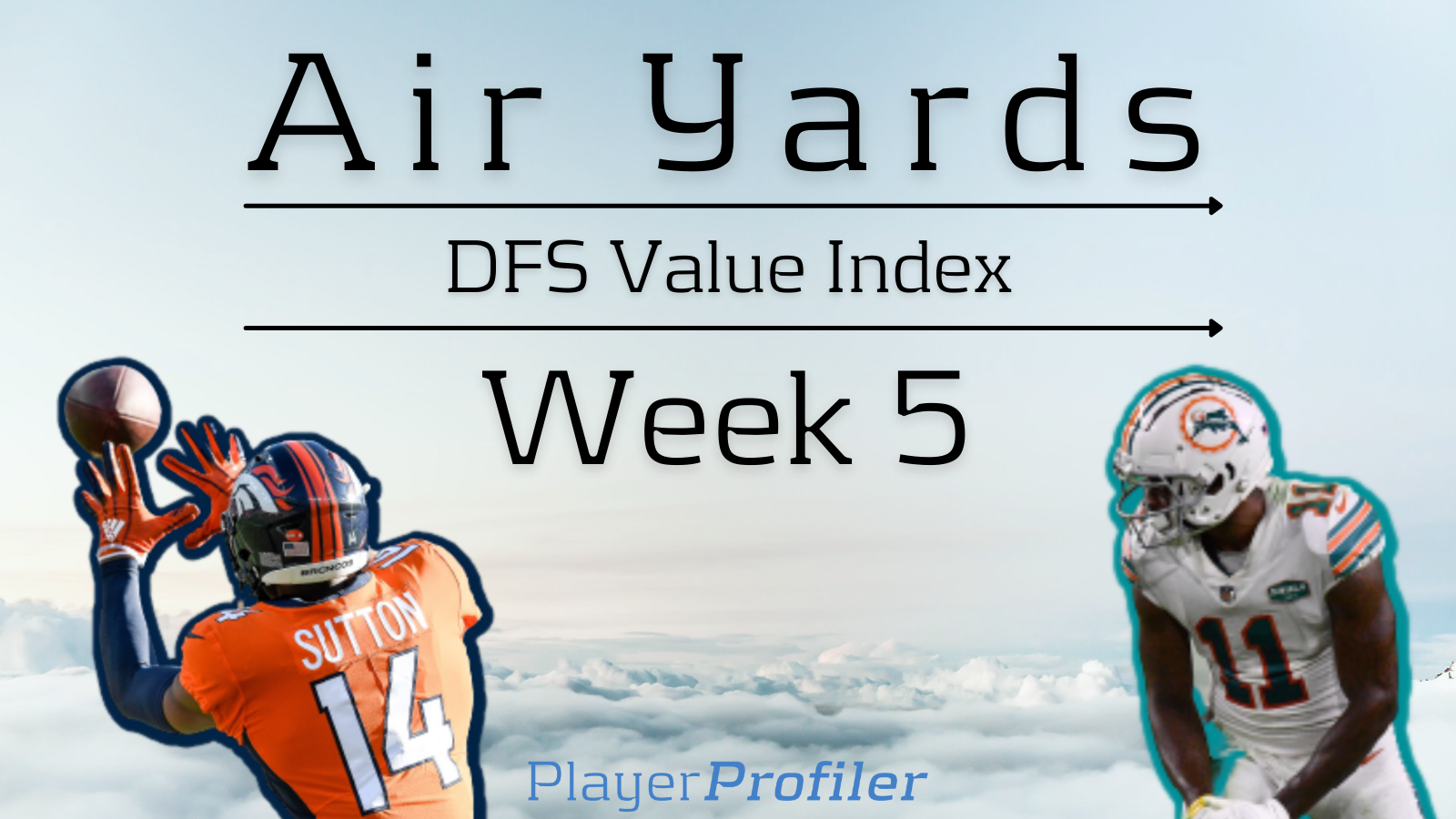 After last week’s dud performance, Brandin Cooks is now $300 cheaper on DraftKings, but still number one on the Air Yards Value List. As THE passing game on a poor Texans offense, last week’s five-reception, 47-yard scoreless performance can be expected on occasion. However, he still saw 83 Air Yards on a day where Davis Mills threw only 191 Air Yards. While J.C. Jackson, and the Patriots secondary presents another tough matchup, he should be confidently inserted into lineups across all formats again this week.

Devonta Smith is ready to explode. Leading the league with 285 Unrealized Air Yards, it is only a matter of time until the rookie first round pick breaks the slate. He is clearly the preferred target in the Eagles passing game, seeing 144 Air Yards just last week. With Philadelphia set to take on the Panthers in a game that has underrated shootout potential, Smith should break out even against a Carolina secondary that just added Stephon Gilmore. He is a recommended play in all formats.

The Marquez Callaway swan song begins this week with Michael Thomas eligible to return to the Saints’ starting lineup in Week 7. Unfortunately, Callaway’s preseason production has not translated to the regular season, with the second-year former UDFA receiver averaging only 7.2 (No. 77) Fantasy Points Per Game. However, Callaway still leads the Saints in Air Yards and has a 13.2 (No. 23) Average Target Distance. He has the potential to boom despite his quarterback Jameis Winston averaging a career-low 7.6 (No. 23) Air Yards Per Attempt. Callaway deserves a spot in cash lineups for this reason, however, the Saints’ low-volume passing attack should make you hesitant to place him into tournament lineups.

Despite scoring only 6.6 fantasy points in Week 4, K.J. Osborn‘s role in the Vikings passing game remained consistent with his season-long usage. He saw 65 Air Yards in Week 4, more than his season-average of 51.8 Air Yards Per Game. The Vikings average 39.8 (No. 8) Team Pass Plays Per Game, making Osborn fantasy-relevant in his role behind Adam Thielen and Justin Jefferson. The passing should continue with the Vikings set to face an exploitable Detroit secondary, making this a great bounce back week for Osborn. At only $3,900, he should be scattered into some lineups across all formats.

Two Lions share the No. 8 spot on the Air Yards Value List. Both Kalif Raymond and Quintez Cephus have been trading off fantasy production in the Detroit passing attack.

Cephus averaged 14.3 Fantasy Points Per Game over the first two weeks of the season, compared to Raymond’s 6.4 FPPG average. Since Week 3, it is Raymond who has the upper hand in production, averaging 16.2 FPPG to Cephus’ 7.1 FPPG average during this time. Additionally, their usage in the passing game has been nearly identical, with both receivers seeing close to 20 targets over four games, and seeing a little over 10 yards of Average Target Distance. Regarding which receiver will boom in Week 5, your guess is as good as mine. For this reason, some exposure to each player in tournaments, considering their identical price, is the preferred way to get exposure.

A.J. Green was redacted from this list many times last season. His Air Yards were ultimately fail yards during his last season in Cincinnati. Dude looked washed. While Ponce de Leon explored what is now know as Florida for the Fountain of Youth, he should have perhaps turned his attention to Glendale, Arizona. Green is seeing similar passing game opportunity that he saw last season, however this year, he is converting those opportunities into fantasy points. His 2021 Production Premium is +1.6 (No. 74) versus last season’s -24.8 (No. 221) mark. With three consecutive weeks scoring above 13 fantasy points, Green should be a mainstay in cash lineups.

Antonio Brown was two missed connections away from a monster Week 4. After leading the Bucs in Air Yards in Week 1, Brown finished only 10 Air Yards away from leading Tampa Bay in the metric last week. He is the clear vertical threat for Tom Brady, averaging 15.1 yards of Average Target Distance, which leads the team.

While Brown does not play nearly as many snaps as Mike Evans and Chris Godwin, he is a preferred target of Brady when on the field as evidenced by a 18.9-percent (No. 10) Hog Rate. Look for him to continue to see week-winning opportunities again in Week 5.

Nelson Agholor appears to be the preferred target of Mac Jones when the rookie quarterback is not checking it down to Jakobi Meyers in the slot. However, outside of a Week 1 performance where he finished as the WR22 on the week, the freshly-acquired free agent has failed to translate opportunity to fantasy points. Up against the Texans in Week 5, Agholor has the potential to have another boom week. He is best reserved for tournament lineups.

Robby Anderson has been an afterthought in the Panthers passing attack behind teammate D.J. Moore. However, last week Anderson saw 126 Air Yards, which was the most he has seen in a game all season and was more than Moore on the week. It appears as if the target distribution in Carolina is narrowing similar to last season, with Anderson seeing 11 targets to Moore’s 12 last week. Look for this trend to continue this week against the Eagles and put Anderson in your DFS lineups.

Somehow, some way, Darnell Mooney has more Air Yards and a higher Target Share than teammate Allen Robinson in the year of our lord 2021. With Justin Fields named the every-week starter moving forward, look for Mooney to continue to see these opportunities. Fresh off a WR15 finish last week, in which he almost doubled Robinson’s Air Yards, the second-year wide receiver should see more than enough opportunities against the Raiders to be a viable play in all formats.

DeVante Parker was one of the least exciting players on this list. That was until I saw this tweet from Ian Hartitz:

DeVante Parker made not one, not two, but three grown-ass man catches in Week 4 pic.twitter.com/UdYNueX54l

Seeing more than 100 Air Yards in Jacoby Brissett‘s two starts this season, Parker will look to make some more “grown-ass man” catches this week against a hobbled Tampa Bay secondary. Projected to see coverage from a washed Richard Sherman, Parker could go off in a game where the Dolphins look to face a negative Game Script for the majority of day.

Courtland Sutton leads the league with 10 Deep Targets, and is currently seeing a 17.7 (No. 5) Average Target Distance. He also is near the league lead in Unrealized Air Yards. Regardless of whether Teddy Bridgewater or Drew Lock is throwing him the ball this week, he should be a lock for tournament lineups. He makes for a perfect contrarian play facing off against the Steelers defense.

Good luck to everyone in Week 5. May all your Air Yards be realized.