The big-play receiver in Tampa Bay isn’t Mike Evans or Chris Godwin, it’s Antonio Brown. He arguably should have come up with wo deep shots to the end zone last week. If he does, everyone would either be selling way too high or holding. Luckily enough for prospective buyers, he didn’t. In the two neutral Game Script games, AB has posted 18-184-1.

Brown has earned an 18.9-percent (No. 10 among qualified wide receivers) Hog Rate and seven (No. 8) Deep Targets. While his Air Yards Share and Route Participation are average, his Hog Rate indicates that he is being used heavily on a per–snap basis. You want AB before he starts seeing the endzone.

Two stinkers following his 30-point performance have opened up a window of opportunity to buy Courtland Sutton. He fits the mold of a proper alpha, the type of profile we chase in fantasy football. Until Jerry Jeudy returns, Sutton is the clear-cut number one option in this passing game. He checks in with a 96.2-percent (No. 14) Route Participation, 40.5-percent (No. 12) Air Yards Share, and an 8.55 (No. 3) Target Quality Rating. 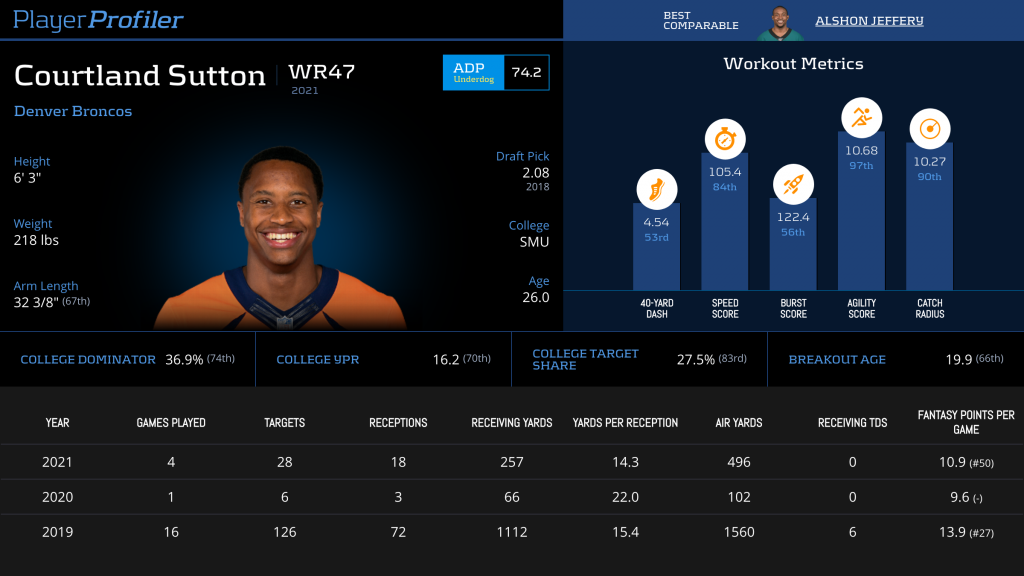 These are promising opportunity and efficiency metrics that lead to production. Denver has shown a consolidated Target Share, which is another big plus. The only negative to watch out for is that Sutton has 496 (No. 3) Air Yards. Air Yards have context, as the Podfather has recently made clear. As a non-separator alpha, these Air Yards are harder to convert from unrealized to completed. Regardless, the talent and opportunity is too salivating to pass up. Go get Sutton before he puts up another 30-point week.

Chase Edmonds is the poster child for “chase production and touchdowns will follow.” He hasn’t seen pay-dirt so far this season, but he’s cleared 15 PPR Fantasy Points Per Game in three out of four weeks. Edmonds has collected 60.3 (No. 8) Weighted Opportunities on a 17.1-percent (No. 3) Target Share and 59.0-percent (No. 6) Route Participation. These are meaningful predictive metrics that he is posting at an elite rate.

James Conner is the vulture, with his four Goal Line Carries for four touchdowns. However, Edmonds has been the only one of the pair that has been an efficient rusher. Conner is dust. It’s only a matter of time before Edmonds gets another goal line carry and punches it in, or busts a big gain on a touch and scores. Don’t fade Edmonds because of four plays. Go get him now, and the production will come.