For many, fantasy football has reached its conclusion. Congratulations to the many newly-crowned champions. However, there is another week of NFL action and another week of fantasy football for many. With players sitting out, including many in this game, it is important to parse who will get bumps in these Week 18 matchups. This Packers-Lions matchup fits that bill to a tee. Many new or unfamiliar faces will play a big role in this matchup, so breaking it down is necessary.

Where is the Love?

The Packers have not only clinched the NFC North divisional title, but also the No. 1 seed in the NFC playoffs. Aaron Rodgers and Davante Adams have campaigned to play in this meaningless game for the Packers, but odds are they will sit out a significant portion of the game, if not all of it. For gamers playing in Week 18, or those eager to make DFS lineups, wait for confirmation as to whether or not key veteran skill players like Rodgers, Adams, Aaron Jones, A.J. Dillon, Allen Lazard, Randall Cobb, Marquez Valdes-Scantling, and Marcedes Lewis will play. When asked about playing time this week, Adams (per Ryan Wood of Green Bay Press-Gazette on Twitter) said:

“I don’t plan on playing the whole game, but if that’s what my coach wanted me to do, I would have zero issue with that.’ For the purposes of this article, with the Packers having nothing to play for, the assumption, for now, is that those guys will not be playing a full game.” 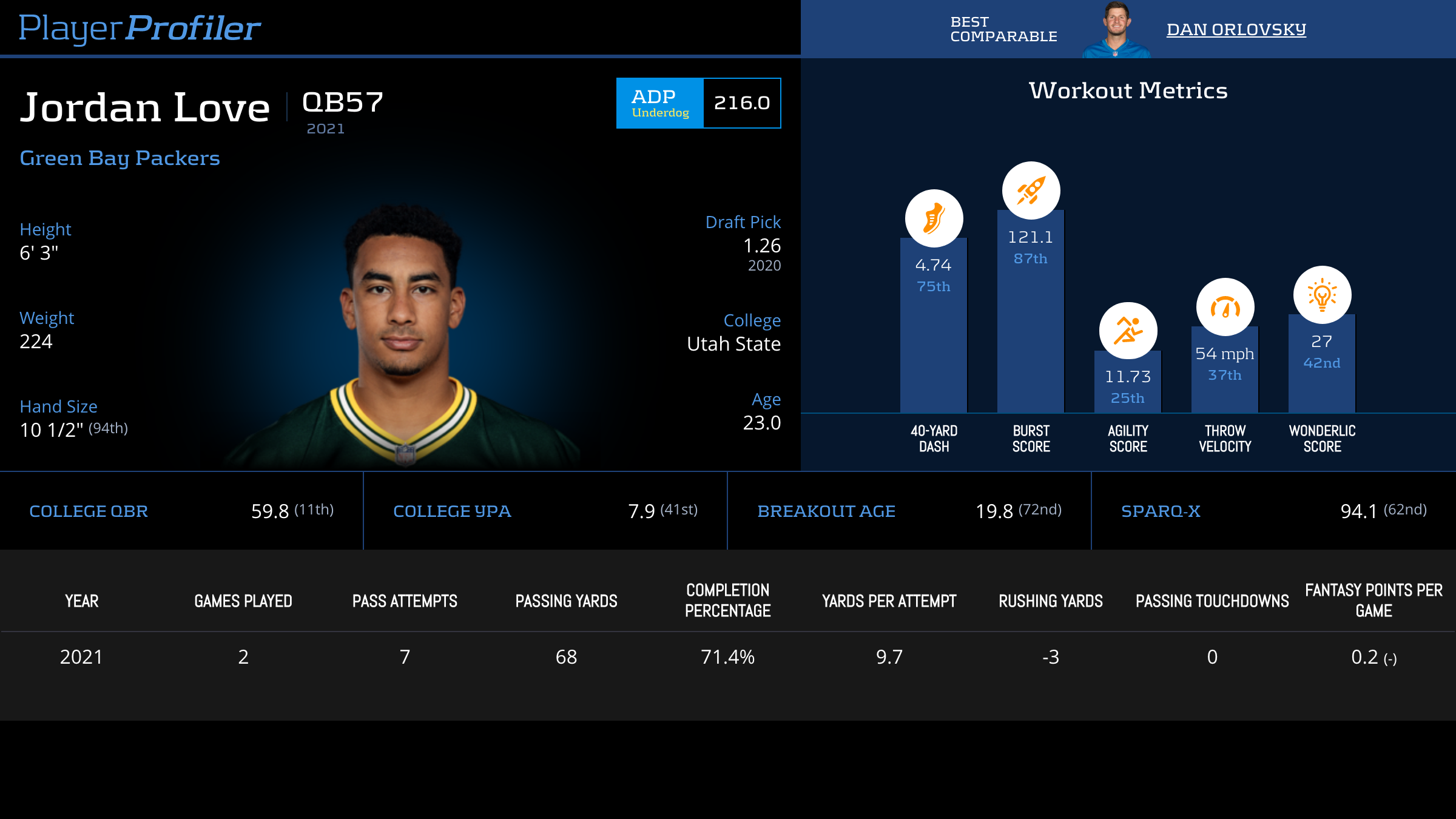 If Rodgers does indeed sit this game, this is a golden opportunity for Jordan Love to showcase his talents and potential as a starting quarterback, whether in Green Bay or not. Outside of preseason and mop-up duty, the only NFL action we’ve seen from Love came while filling in for Rodgers in Kansas City, where he finished the game 19 of 34 for 190 yards with a touchdown and an interception. Love did add 23 yards on the ground that game and churned a ten-yard carry last week against Minnesota. Detroit’s defense sits No. 29 in pass defense DVOA per Football Outsiders. With a rushing boost and a lot to play for, Love is a solid DFS dart throw for those that opt for cheaper options at the quarterback position.

In terms of who will be a more valuable fantasy option this week, that would fall on the backs of Equanimeous St. Brown, Amari Rodgers, and JuWann Winfree.

St. Brown and Winfree got spot starts in Week 8 while the Packers dealt with COVID-19 and injuries, but neither lit up the stat sheet. Winfree hauled in his first four NFL receptions in that game for 30 yards while playing 74-percent of Green Bay’s snaps. Rodgers did not find a role in the offense this season; he didn’t play more than 26-percent of snaps in any game. St. Brown played a career-high 92-percent of snaps but went for 12 yards on two receptions. Though he has flashed when given a chance over the course of his four-year career, with two games of 89 or more receiving yards as a rookie with at least 53 yards in the three games he saw at least five targets. He’s also run double-digit routes in three of Green Bay’s 16 games, while Winfree has done so once this season and Rodgers none.

As mentioned before, the Lions’ secondary has been generous to opposing pass offenses. Being more established and explosive than Winfree and Rodgers, St. Brown gets the edge for fantasy, but it wouldn’t surprise if either had their way against this Lions secondary.

Josiah Deguara was underwhelming last week with a drop in the end zone, but he still is the tight end to play for fantasy purposes. He has run double-digit routes every game since Week 10. His SPARQ-x score ranks in the 85th-percentile among qualified tight ends. With this game being pointless for the Packers, it’s hard to imagine that veteran Marcedes Lewis will play. Fourth-now-third string tight end Tyler Davis will also play, but Deguara is the one worth a shot against this leaky Lions secondary.

My Name is Patrick

Get ready to learn the name Patrick Taylor. He is a second-year who has bounced around the NFL before finding a home in Green Bay filling as the third-string running back for injured rookie Kylin Hill, but he’s got game too. 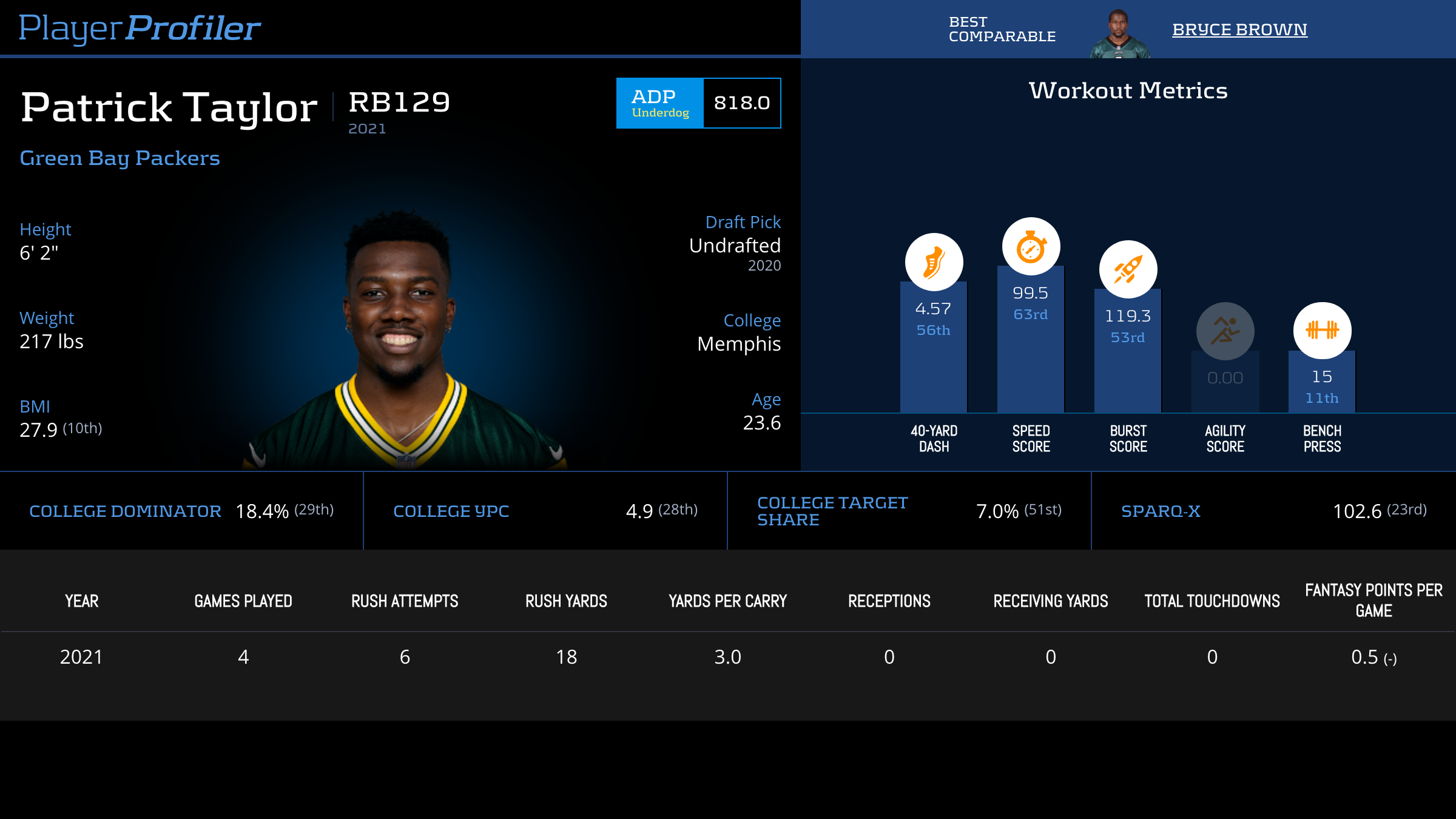 In the 2018 season while in college at Memphis, Taylor ran for 1,122 yards as the backup to Darrell Henderson. He managed to carve out a big role, holding off Tony Pollard, Antonio Gibson, AND Kenny Gainwell during his collegiate career while averaging over 5.0 yards per carry. Taylor did put together 55 receptions over the course of four collegiate seasons too. He’s yet to make a name of himself in the NFL, but his chance is here this week. The Lions run defense ranks No. 31 according to Football Outsiders’ run defense DVOA metric. Of all the Packers backups that will get major playing time, Taylor is the best DFS and seasonal play for gamers looking for Week 18 action.

Tim Boyle has filled in admirably for Jared Goff while he has tended to a knee injury, but the production has lagged behind. In three starts, Boyle has thrown double the number of interceptions (6) than touchdowns (3). Even if Goff ends up starting this week, he ranks outside the top 20 in numerous categories; including Yards Per Attempt (6.5, No. 27), Air Yards Per Attempt (6.4, No. 34), Adjusted Yards Per Attempt (6.0, No. 23), and Expected Points Added (+12.3, No. 31). Neither are worthwhile quarterback options regardless of format.

The only fantasy option from this passing attack is Amon-Ra St. Brown, who was a league winner for many. Over the past five weeks, he became the first rookie receiver in NFL history to haul in at least eight receptions in five straight games. During those weeks, he’s never seen below 11 targets or registered fewer than 73 yards. His Target Share over the last five weeks? 32.2-percent. To put that in context, Cooper Kupp‘s 32.3-percent Target Share ranks No. 2 in the league. For Week 18 and DFS purposes, there’s no reason to think St. Brown will stop now. He’s a strong WR2 play.

While he lines up in the slot plenty (464 Slot Snaps, No. 5) like Kupp, the volume won’t continue as steadfast as it has come the last five weeks. D’Andre Swift has played one game during this stretch and he split time in the backfield in his return to action. T.J. Hockenson played only one game too. St. Brown still played a solid role when both were healthy, but didn’t have a single game (of 11 when both Swift and Hockenson played) with double-digit targets, and only three games with 60 or more yards. It’s hard to crank out high-yardage games with a 6.7 (No. 98) Average Target Distance and without a hefty volume load.

This isn’t to say St. Brown is a bad player; not at all. But he’s benefitted greatly from a buffet of volume to his disposal. It is to say that his dynasty value could never be higher than it is right now. If he can net a first-round rookie pick or even a high second-round pick, that’s good value in yet another strong draft for running backs and wide receivers.

He was a league-winner and a great Week 18 option. But with Swift and Hockenson healthy next season, and another mouth to feed possibly in the fold, it isn’t hard to see him take a backseat to others while continuing to be a solid receiver for the Lions.

There aren’t many other options in this passing attack, but Josh Reynolds is viable too. He missed last week after being placed on the reserve COVID-19 list. However, he’s seen at least five targets in each of his last five games. With a 13.2 (No. 12) Average Target Distance, Reynolds gets his work done down the field. With the Packers likely playing backups, the pending free agent who is playing for another contract can get behind their backup secondary a few times and have a solid game.

Thanks for nothing, Dan Campbell. After promising to ‘let him loose,’ D’Andre Swift registered a mere four carries for 32 yards and two receptions on three targets for seven yards. Though he played 57-percent of the team’s snaps, Swift touched the ball six times, while Jamaal Williams and Craig Reynolds combined for 19. With no reason to actually ‘let (Swift) loose,’ it is hard to trust any Lions running back this week when all three are vacuuming each other’s touches. 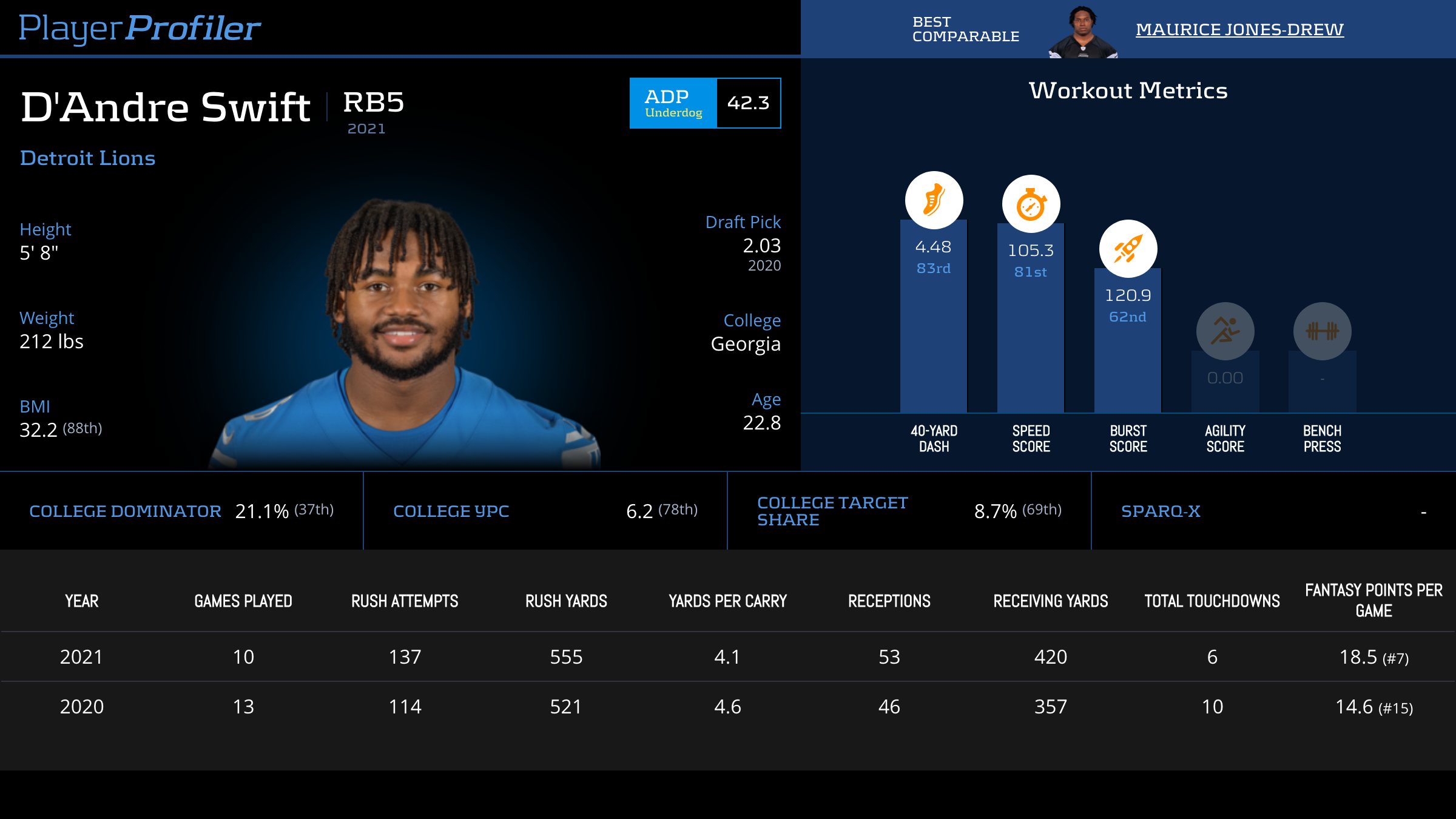 However, it is worth remembering how great Swift was this season. Before getting injured in Week 12, and excluding his return last week, he played fewer than 63-percent of Detroit’s snaps in a game just once. Only once did he register fewer than five targets in a game. Despite missing four games and most of another, his 73 targets still ranks No. 4 at the position. His 18.5-percent Target Share and 65.6-percent Route Participation sit at No. 3. Swift was one of the team’s most trusted pass catchers. A better offense could propel him to new heights with that type of receiving usage. He will be a high draft pick next fantasy season.

Aaron Rodgers, Aaron Jones, A.J. Dillon, Davante Adams, Allen Lazard, Randall Cobb, and Marquez Valdes-Scantling likely will sit most, if not all, of this game

RB: Patrick Taylor is a DFS and seasonal play. D’Andre Swift, Jamaal Williams, and Craig Reynolds cancel each other out.

The Packers are too good to play their starters in this game. The Lions stink. Vegas still lists the Packers as 3.5 point favorites, despite the possibility backups will rule the day for them. The Packers prove Vegas right and eke out a 21-17 win.