Welcome everyone to Week 18 of the NFL regular season! This is the final week of the regular season, and while half the league has nothing to play for, or have already clinched their playoff birth, others are playing for a better seed or still playing to get in the playoffs. This matchup article is set on a matchup between two NFC West division rivals that have plenty to play for, including playoff positioning and NFL records. The Los Angeles Rams have gone all in on this season, and no matter how this game ends, they are in the playoffs. It gets a little tricky for the 49ers. They  either need to win or for the New Orleans Saints to lose in order to get into the playoffs. Let’s start by checking in on the favorites to win this game—the Los Angeles Rams—and their offensive skill weapons to watch!

Cooper Kupp‘s historical season comes to a finish this weekend, and he is on the cusp of breaking two legendary records. He needs 11 catches to break Michael Thomas‘s incredible record of 149 receptions in a season. 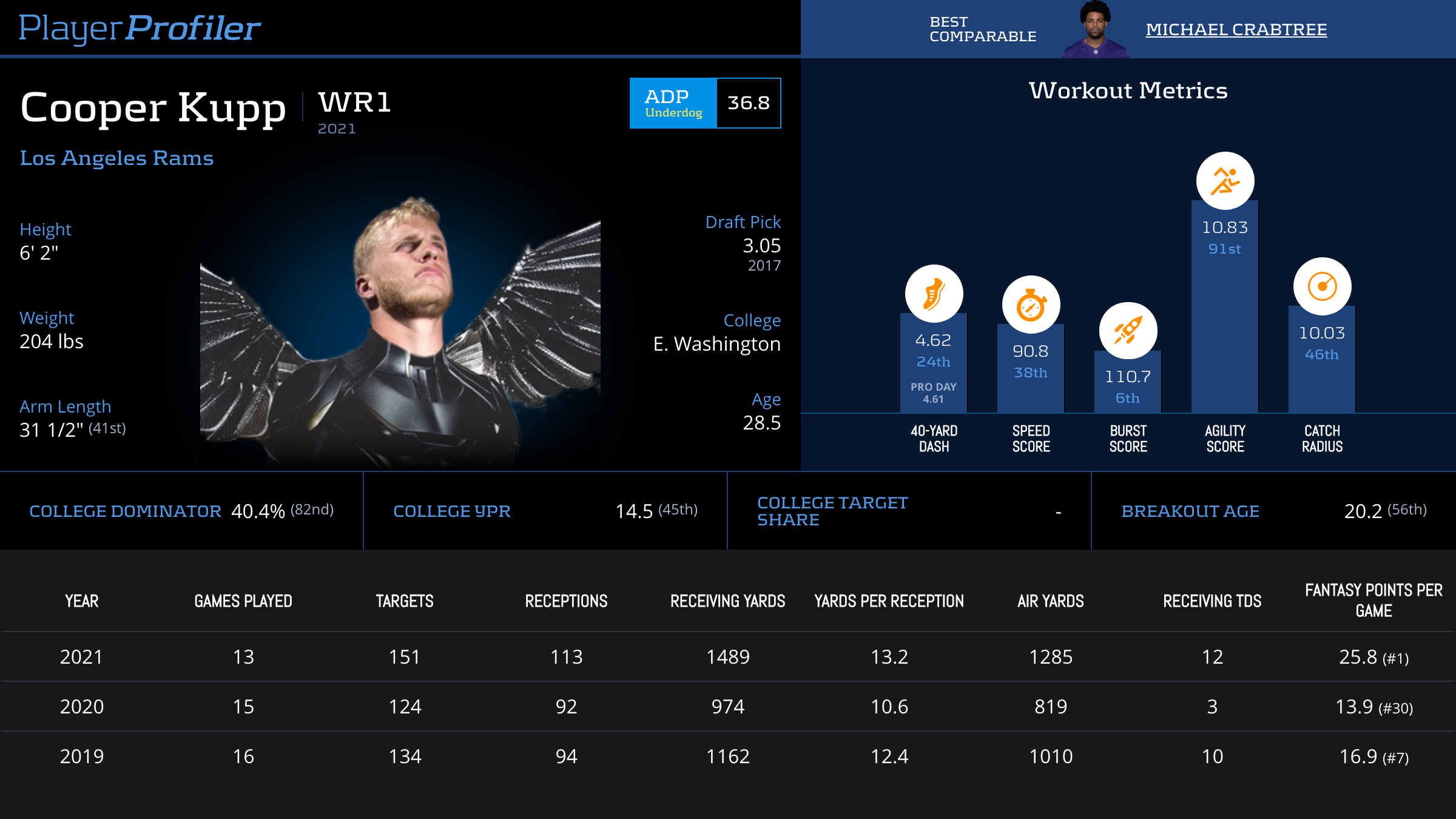 To put his pace in context, he currently has 138 receptions, and if the season were to end after last week, he would have finished third all time between Marvin Harrison‘s 143 receptions from the 2002 season, and right ahead of Antonio Brown‘s 136 receptions from 2015. That’s not the only record in danger of being broken, oh no. He also needs 135 receiving yards to tie Calvin Johnson‘s single-season record of 1,964 yards, which was set in 2012. If the season had ended last week, he would have finished No. 5 all time in receiving yards.

No longer tethered to Jared Goff, we see the blossoming of a star receiver with Kupp. He’s always been a weapon for the Rams, but with Matthew Stafford calling the shots, he’s unleashed on the NFL and boy has it been a joy to watch. When looking at his numbers, probably the most astonishing statistic I discovered while reading up on him was his Slot Fantasy Points. He has scored 247.3 PPR points from the slot in fantasy football, good for No. 1 overall.

How close is second place? Tyreek Hill ranks No. 2 with only 130.9 slot fantasy points.

The Rams also have valuable weapons Van Jefferson and Odell Beckham, making a case for the most talented trio of wide receivers for any team. They will surely make plays, but Kupp is who Stafford looks to, and there’s no reason why he should stop. Now, on to a topic that’s possibly even more unbelievable than Kupp’s total season numbers.

Of the many depressing injuries that occurred early in the season, one that seemed to hurt the most was the Achilles tear of Cam Akers. Expected to be the leader of the rushing attack, he went down with the devastating injury in July. Shortly afterwards, the team made a trade for Sony Michel to fill the hole in the backfield. Quietly, Akers has been working hard, and the Rams haven’t said much; only that he could be back in time for the playoffs. That felt optimistic considering how the Achilles injury is perceived in football. However, with Akers cleared to play, it’s clear that we are in a new era. D’Onta Foreman experienced the injury and was written off; however, he looked fine to me last week after rushing for over 100 yards against Miami.

Listen below to what was said on a September RotoUnderworld podcast about a potential Akers return this season:

And here we are with Akers making his season debut. Michel will be the lead back and will absorb most of the touches and snaps, but it will be thrilling to witness the return of Akers in this offense. While we’re on the subject of talented young running backs, let’s observe the 49er offensive weapons!

Way back in Week 1 when Raheem Mostert went down, Elijah Mitchell filled in and did a fantastic job. And even after missing games due to injuries himself, whenever he is fully healthy, he is the primary running back for this offense.

Mitchell has many impressive metrics on his profile page, but the one that sticks out to me is his 127.8 (88-percentile) Burst Score, comparable to stud running backs Aaron Jones and Derrick Henry. His 11.14 (78th percentile) Agility Score compares favorably to NFL vet Melvin Gordon. The clues were there all along for him to be a contributor to an offense in the right scenario. It’s clear that the 49ers were the right team for him.

The 49ers offense is much more than Mitchell. We all are aware of George Kittle’s ability. And he is easily in the discussion for most talented tight end in the NFL, performing with 90th-percentile or higher marks in the following metrics: Agility Score, Burst Score, Speed Score, 40-Yard Dash, and Catch Radius. Every now and then, he will have a game where he takes over and dominates the opposing defense. Then there’s Deebo Samuel, the do-it-all playmaker used all over the offense. He will be lining up against Jalen Ramsey, the No. 1 player on PlayerProfiler’s CB rankings. Oh, and did I mention Brandon Aiyuk? His 132.0 (92nd-percentile) Burst Score compares favorably to former NFL receivers Dez Bryant and Roddy White. The tools are there for the offense to succeed. Now who will the quarterback be on Sunday?

Take a Chance on Lance

The Jimmy Garoppolo injury opened the door for Trey Lance to start. After a slow start against Houston, he finished with 249 passing yards, 31 rushing yards, and two passing touchdowns. The rookie quarterback numbers from the 2021 NFL Draft have been a mixed bag, so it was refreshing to see him play competently.

Kyle Shanahan has not given any hints as to whom will start, so it’s anyone’s guess. If Garoppolo can put in a limited or full practice on Friday, and with a playoff appearance on the line, the team may prefer the established veteran to start. There’s clear excitement for the No. 3 overall pick from 2022 to see more action.

The last time these two teams faced off was in Week 10 when 49ers absolutely crushed the Rams 31-10. Vegas sees the Rams as 4.5-point favorites, but they will have to shake off the early season loss. Plus, Matthew Stafford has thrown six interceptions in the last three games, along with two fumbles. Oh, and the 49ers have beaten the Rams in the last five straight games. The Rams are playing for the second seed in the NFC playoffs, while the 49ers are technically needing a win to get in. The 49ers are likely inclined to use the established veteran in this scenario, but I’m fearful he may not be at 100-percent. We may see a rushed Jimmy Garoppolo return, and I expect the Rams to take advantage of any issues the 49ers may have.