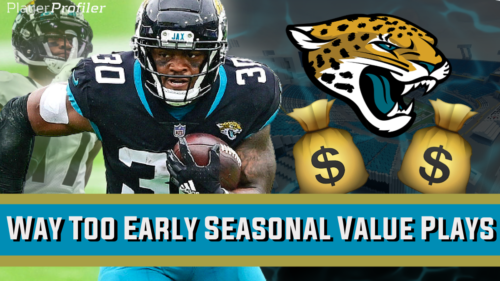 As the calendar turns to June with Organized Team Activities (OTA’s) underway, we inch closer to the heart of the fantasy football draft season. Since we’re looking at Way Too Early Seasonal Value Plays, we’ll note the best ball ADP via Underdog that shows up on the PlayerProfiler player pages. Keep in mind that the Underdog lineups involve Half PPR with one quarterback, two running backs, three wide receivers, a tight end, and one Flex spot. RotoUnderworld Director of Analytics Josh Larky wrote up an Underdog strategy guide here.

We’ll highlight at least one player from each position that feels like a Way Too Early Seasonal Value Play. Even outside of best ball leagues, consider these players early redraft league targets. First, let’s briefly define the term value. Often, we call a player a “value,” yet we’re unable to determine a player’s value until the end of the season. For simplicity’s sake, I like their Underdog ADP at this point based on the data.

If you want to hear someone gush over Jalen Hurts, then fellow RotoUnderworld analyst Aaron Stewart is the person to connect with. You can read Aaron’s detailed analysis on Hurts as the Next Great Konami Code QB here. Hurts will provide the dual-threat production that we love in fantasy football. From Weeks 14-17, he averaged 68 rushing yards per game and over 23 Fantasy Points Per Game. Over a 17-game season, he was on pace for over 3,900 passing yards and 1,100 rushing yards. He’s currently the eighth quarterback drafted behind Justin Herbert and Russell Wilson.

The Eagles ranked No. 3 with a 2.41 Pace of Play and No. 4 with a 41.4 Team Pass Plays Per Game average, meaning they threw the ball a ton with a high amount of plays per minute. Add that to the rushing production he’ll provide, and Hurts is the perfect QB1 to target that could find himself as a top five quarterback. Or even better, it’s within the range of outcomes for him to finish as this year’s Josh Allen with a ceiling of No. 1 quarterback in fantasy football.

Many fantasy managers, including myself, once disrespected Ryan Tannehill. Admittedly, I didn’t think he would keep up the efficiency from 2019. Well, he said screw you (editors note: HOW DARE HE!) and provided efficient production once again in 2020. Tannehill is currently the 13th quarterback off the board behind Matthew Stafford and Aaron Rodgers.

With all the hype surrounding Travis Etienne, James Robinson keeps seeing his ADP drop, which helps him land as a Way Too Early Seasonal Value Play at RB.

From a real-life perspective, it’s confusing that the Jaguars drafted Etienne in the first round since they essentially struck gold with Robinson in 2020. He finished with an 85.2-percent (No. 1 among qualified running backs) Opportunity Share and 238.2 (No. 6) Weighted Opportunities, all with the team ranking dead last with a 21.0 Team Run Plays Per Game average. Sure, Etienne will likely eat into the receiving opportunities, but I’ll take the discount on Robinson in 2021.

A few concerns involve Gaskin sitting in that running back “dead zone,” and his ability to replicate that production in 2021. However, if there’s one skill set to target for running backs, it’s their receiving ability. He proved he had that last season, even with some mediocre efficiency numbers.

With an upgrade at quarterback, D.J. Chark sits right outside the top 30 at wide receiver in Underdog ADP. The Jaguars averaged 41.2 (No. 6) Team Pass Plays Per Game and had a high 2.34 (No. 3) Pace of Play. Meanwhile, they often played from behind with a -8.20 (No. 32) Game Script mark. Check out the quarterback opportunity data table under Jalen Hurts again in regards to the Jaguars quarterback opportunities.

Even with Gardner Minshew and Mike Glennon as his QBs in 2020, Chark earned a 20.0-percent (No. 37) Target Share and 34.3-percent (No. 14) Air Yards Share. We can expect the Jaguars offense to rate a bit more efficiently with Trevor Lawrence at quarterback, meaning a potential increase in efficiency for Chark. Overall, he feels like a post-hype receiver in 2021, which makes him my favorite Way Too Early Seasonal Value Play at WR.

If there were Air Yards leagues, Jerry Jeudy would be a WR1. But unfortunately, most leagues don’t count Air Yards as a fantasy point-scoring stat. Last season, Jeudy earned a 21.2-percent (No. 31) Target Share and 31.5-percent (No. 25) Air Yards Share. Pretty solid numbers for a rookie that earned 1,536 (No. 6) Air Yards. Unfortunately, he lacked efficiency with a -16.5 (No. 82) Production Premium and 1.38 (No. 102) Fantasy Points Per Target average. Particularly, if Teddy Bridgewater wins the starting job, it should translate into positive outcomes for Jeudy and the Broncos receivers.

Look for Logan Thomas to repeat his 2020 performance in Washington 🔥 pic.twitter.com/GSB3PTaVwB

Although Thomas ranked No. 7 or better in several important productivity and opportunity metrics, his ADP lands him at the TE10 slot. Sure, TE7 production and opportunity aren’t far from his ADP. However, the upgrade at quarterback in Ryan Fitzpatrick should help with the offensive efficiency. The WFT offense is absolutely one to target in fantasy.

This one’s a bit of a deep cut in Gerald Everett, now on the Seahawks. They still have Will Dissly, who flashed two top 15 performances in 2020 and four top six performances in 2019, though he only played in six games that season. If we’re looking for someone similar to 2020 Logan Thomas, with the athletic metrics that intrigue us, Everett is our guy. He boasts a 103.0 (75th-percentile) Speed Score, 128.6 (94th-percentile) Burst Score, and 11.32 (81st-percentile) Agility Score, all similar numbers to Thomas.

Although the Seahawks offense typically revolves around Chris Carson, D.K. Metcalf, and Tyler Lockett, Everett can earn opportunities with efficient production and paired with one of the league’s most efficient quarterbacks in Russell Wilson. In 2020, Wilson had a +20.8 (No. 3) Production Premium with a 7.3 (No. 12) Adjusted Yards Per Attempt average. New offensive coordinator Shane Waldron has a connection with Everett from their time with the Rams, so that’s a minor wrinkle to consider. Target him as a TE2 with upside in redraft leagues.