Some fantasy players love to know what they have before they draft a player. “Have to see it first drafters” are organized and rule-based. They like to draft experienced players with large NFL sample sizes. “Look how they did last year! This is what I am expecting again this year!” The problem with this drafting style is that it rarely produces the sort of build that can truly dominate your opponents. Often this style of drafting leads to chasing old scores and drafting players who have already played their best seasons as a pro. This limits the unknown upside that lies with players who are on the verge of breaking out.

There’s always some risk, but there are great rewards. Consider drafting players with unknown upside. They’re usually younger and have NOT had the signature seasons of their careers. They also tend to see their ADPs rise significantly in the following seasons.

We have seen Lamb have fantasy success in the past. He finished as WR22 as a rookie and followed it up with a slightly disappointing sophomore campaign last year as WR 19. His talent and profile are undeniable, but his role has been lacking. This season seems to be a perfect storm where talent intersects with team needs and positional opportunity. Amari Cooper is now a Cleveland Brown, and Michael Gallup‘s return is unknown. This feels like the year for Lamb and drafters are betting on it. A season with Lamb leading the NFL in targets and finishing as WR1 overall is within his range of outcomes.

Swift is a dark horse selection to finish as RB1 overall. The offensive line is arguably the best unit in football. Weapons have been brought in that figure to prevent stacked boxes. As a result, Swift has a real shot at 2,000 combined rushing and receiving yards.

Pittman broke out last season, finishing as a WR 2 on 88 receptions for 1082 yards and six touchdowns. He now has a chance to take another step forward and make his ascent to WR 1 territory. Drafters are aggressively targeting him and for a good reason. With the addition of Matt Ryan, Pittman should see improved QB play. 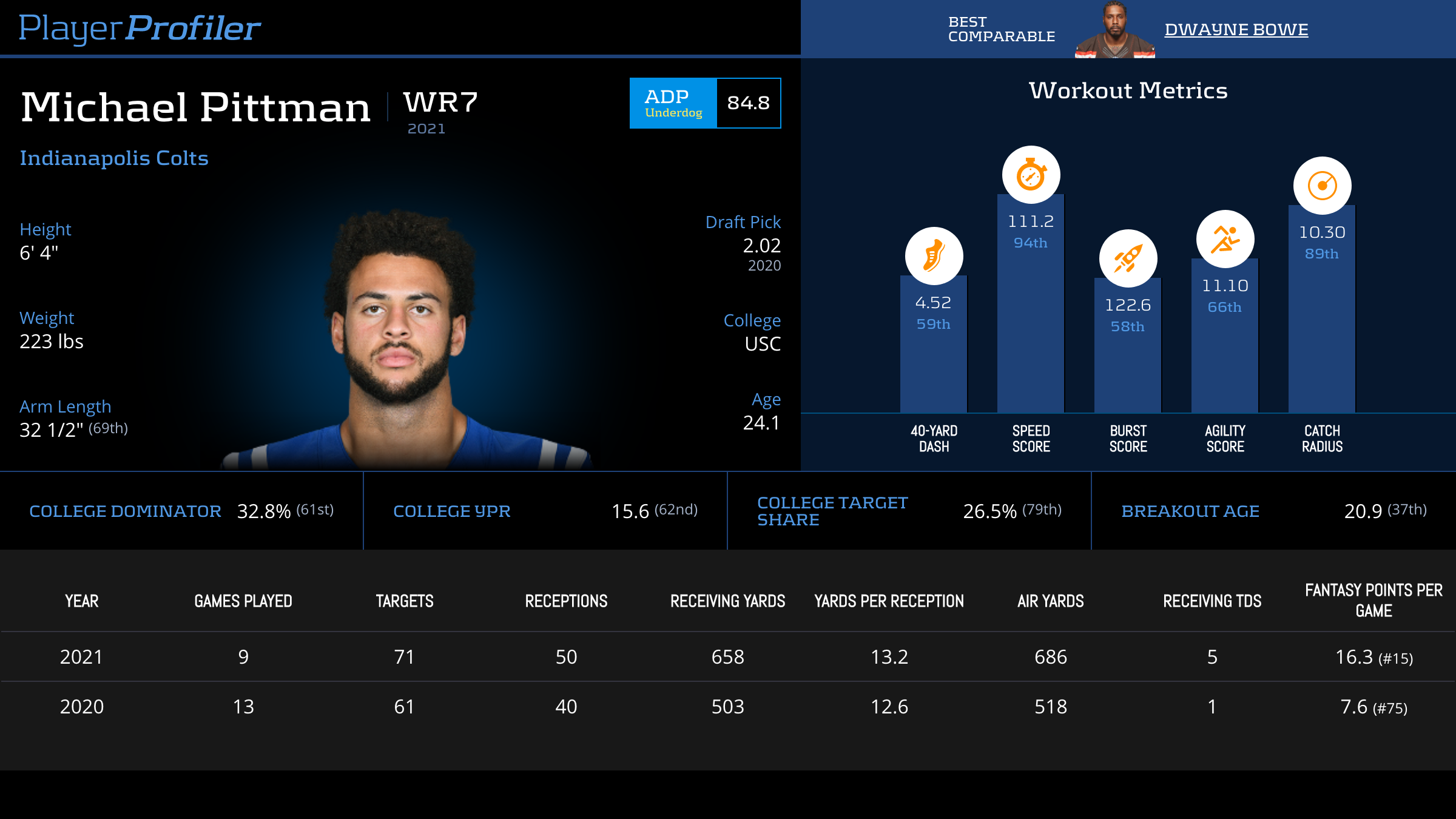 Pittman over Williams was a difficult one. Williams could finish as a top five running back with the improved Denver offense. The presence of Melvin Gordon did just enough for me to lean to Pittman.

The TE unicorn. All it took was one preseason play for the fantasy community to be reminded of the possibilities with Kyle Pitts. Pitts burned Jets’ CB Bryce Hall on a 52 yard completion. He also made the play look effortless.  Last year we saw Pitts set a Falcons rookie record for yardage, surpassing future Hall of Famer Julio Jones. He was also the second rookie tight end to top 1,000 yards ever. This season, with no Calvin Ridley, Pitts could lead all TEs in targets and has a chance to be the league winner. Do not overthink Pitts.

Etienne has seen a slight dip in ADP with the news of James Robinson returning. He still has an impressive upside as a receiver and is a more talented, more athletic, and a more highly pedigreed player than Robinson. Expect a breakout season from Etienne with a new coaching staff in Jacksonville.

Bateman is a tough one for the “need to see it crowd.” He has only played in 12 NFL games and has only gone over 100 yards receiving once. But this is a classic example of a player you want to be ahead of the market with. Bateman was a first-round draft pick for Baltimore last year and checked every box as a prospect. He is an unquestioned top two target for a Ravens team that traded Marquise Brown to Arizona this past offseason. Brown had a 26-percent target share last year. If Bateman steps into a similar one, he has a chance to finish as a WR1.

The Packers are looking for an offensive identity after losing WR Davante Adams to Vegas, and the most obvious choices are RBs Aaron Jones and A.J. Dillon. In Dillon, we get exposure to the less expensive option three rounds later than Jones. Dillon is younger and led the Packers in rushing yards and touchdowns last year. 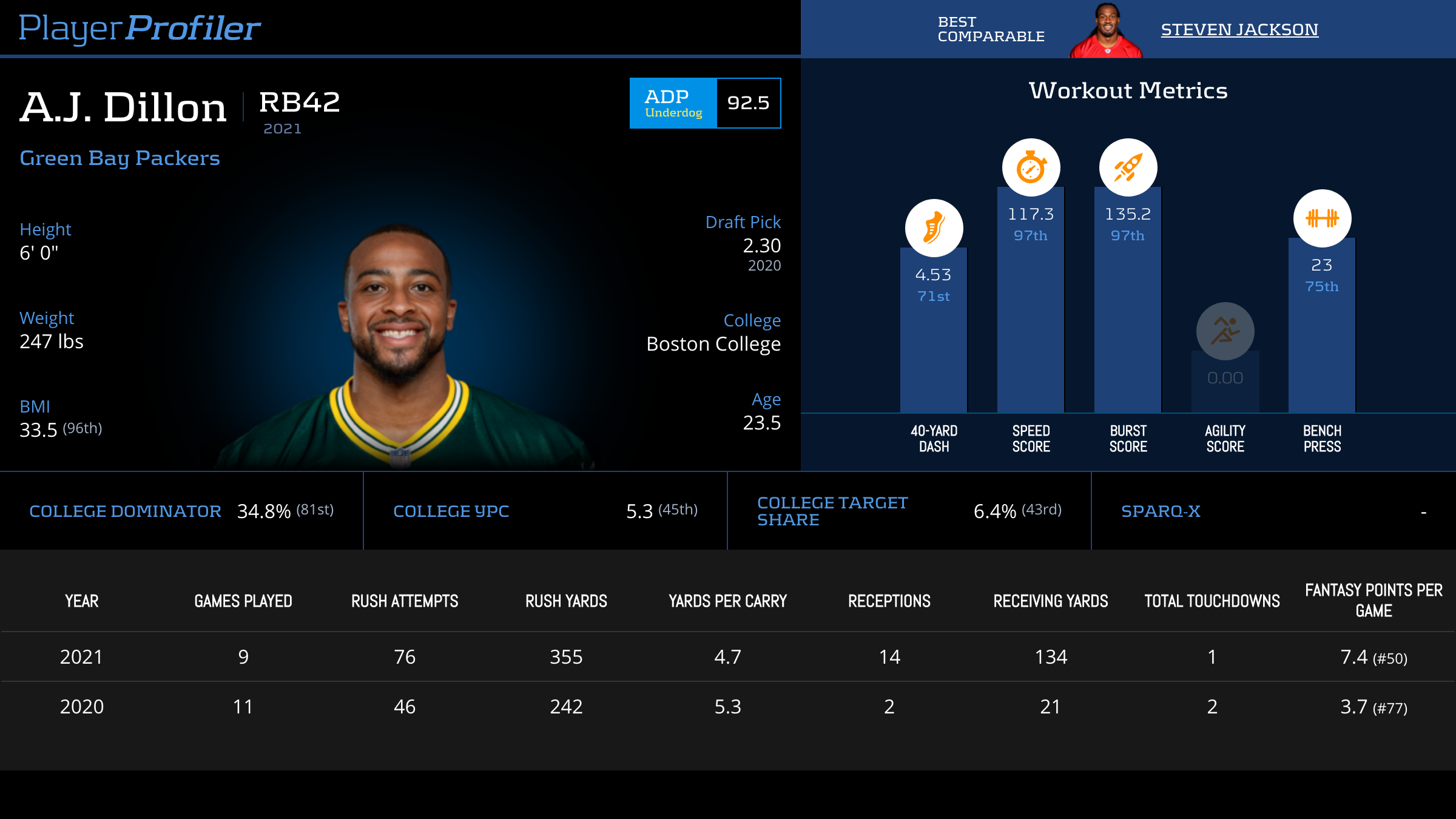 He also added an impressive 34 receptions. Aaron Rodgers has signaled out both backs as having the potential to catch 50 passes or more. If Dillon hits 50 receptions, and takes a step forward as a rusher, he outscores Jones and could finish as an RB1.

It is easy to focus on the RBs in Green Bay, but Rodgers will elevate a wide receiver and Lazard seems like the best bet. He is being drafted as a WR3 but could easily finish as a WR2. Lazard has a double-digit TD upside.

Is it double Unicorn SZN in Atlanta? Pitts now shares the field with Drake London, a 6-4 220-pound unit wide receiver who, like Pitts, was a top 10 NFL Draft pick. London looks like a more athletic version of Mike Evans. He is well priced in the sixth round due to a minor knee injury sustained on a 24-yard reception in his preseason NFL debut. London is your pick in this round if you are looking for upside. He should see more than 100 targets and could be very efficient as defenses focus on Pitts.

Jameis Winston has never finished below QB14 in any season as an NFL starter. One of the main reasons is his willingness to take shots downfield. In Olave, The Saints have the sort of game-breaking 4.39 speed combined with the dynamic receiving ability he displayed at Ohio State. 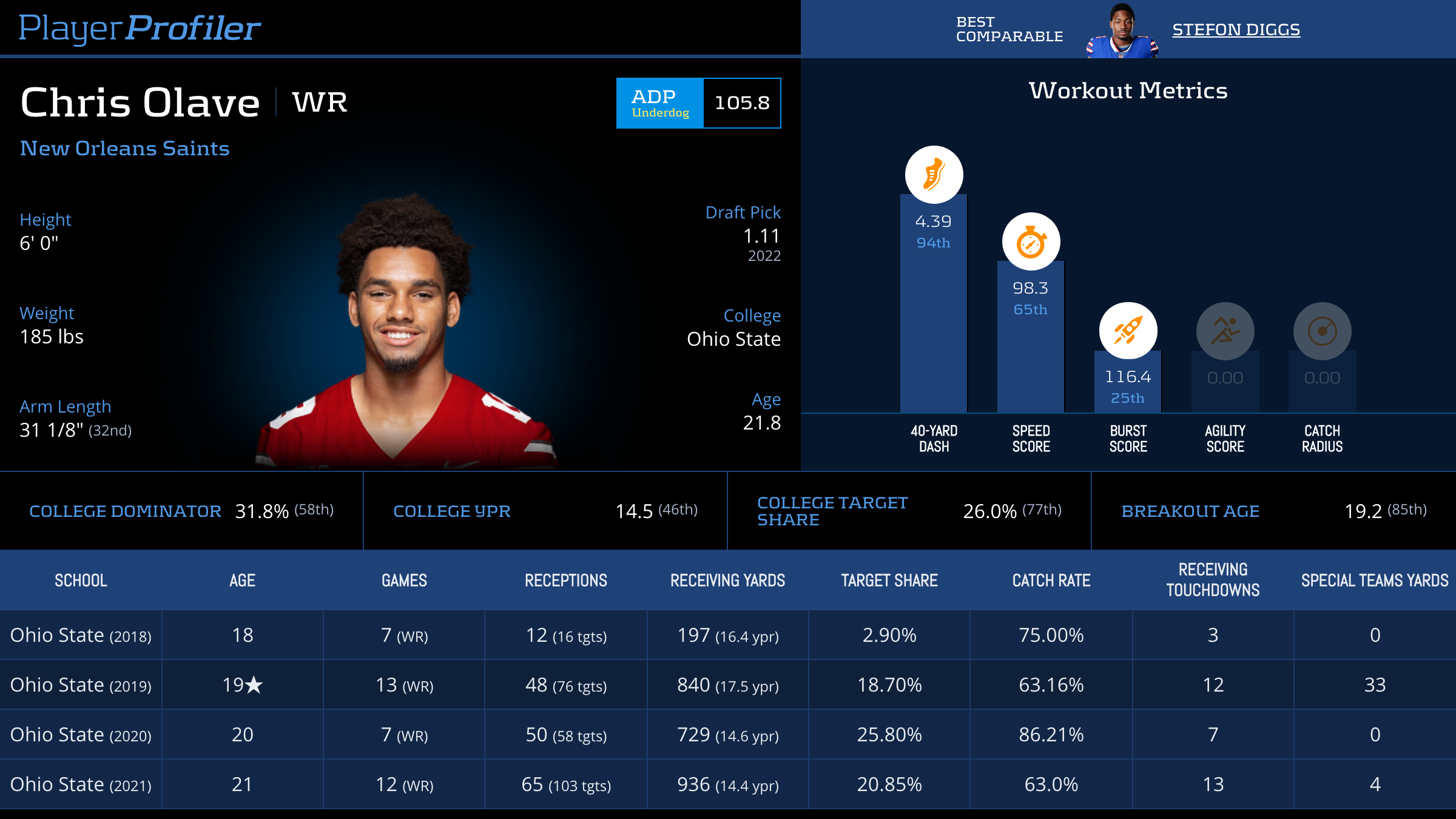 Olave finished top five in receiving touchdowns, yardage, and receptions in his legendary Buckeyes career. Additionally, the Saints aggressively traded up to select him in this year’s draft at pick 11 overall. Michael Thomas, Alvin Kamara, and Jarvis Landry are all polished veteran route runners, but it is easy to picture Olave accumulating smash weeks and has a high TD upside even as a rookie. Consider him here as a potential hammer in the flex or WR3 spot.

Stevenson has moved up a lot in terms of ADP. He could move up even more with the most recent Ty Montgomery injury news. Despite Damien Harris scoring 15 rushing TDs last season, drafters have been betting on a Stevenson breakout. Stevenson was efficient with his opportunities in 2021. He rushed for 4.6 yards per carry and had 8.8 yards per reception. Stevenson also found the end zone five times. He improved his body this offseason. Stevenson lost weight and got down to a leaner 225 pounds. The idea of Stevenson in the James White role with more significant rushing upside could lead to lots of fantasy goodness.

Pierce is THE late August riser in fantasy drafts. The eighth-round price tag is headed much higher (we have seen him in the sixth round of a few recent drafts). Pierce has the most straightforward path to RB1 land out of the gate among all rookie running backs. The Houston Texans are looking for playmakers and have a solid offensive line. Pierce has looked explosive and elusive this preseason, and his competition for RB touches are veterans Marlon Mack (recently cut) and Rex Burkhead– hardly impediments to a large workload. James Robinson 2020, Najee Harris 2021….Dameon Pierce 2022?

Pickens has that DAWG in him, and he has dominated Steelers training camp. He caught five passes in two preseason games, including a TD reception. Pickens has also been running with the first-team offense in two WR sets. 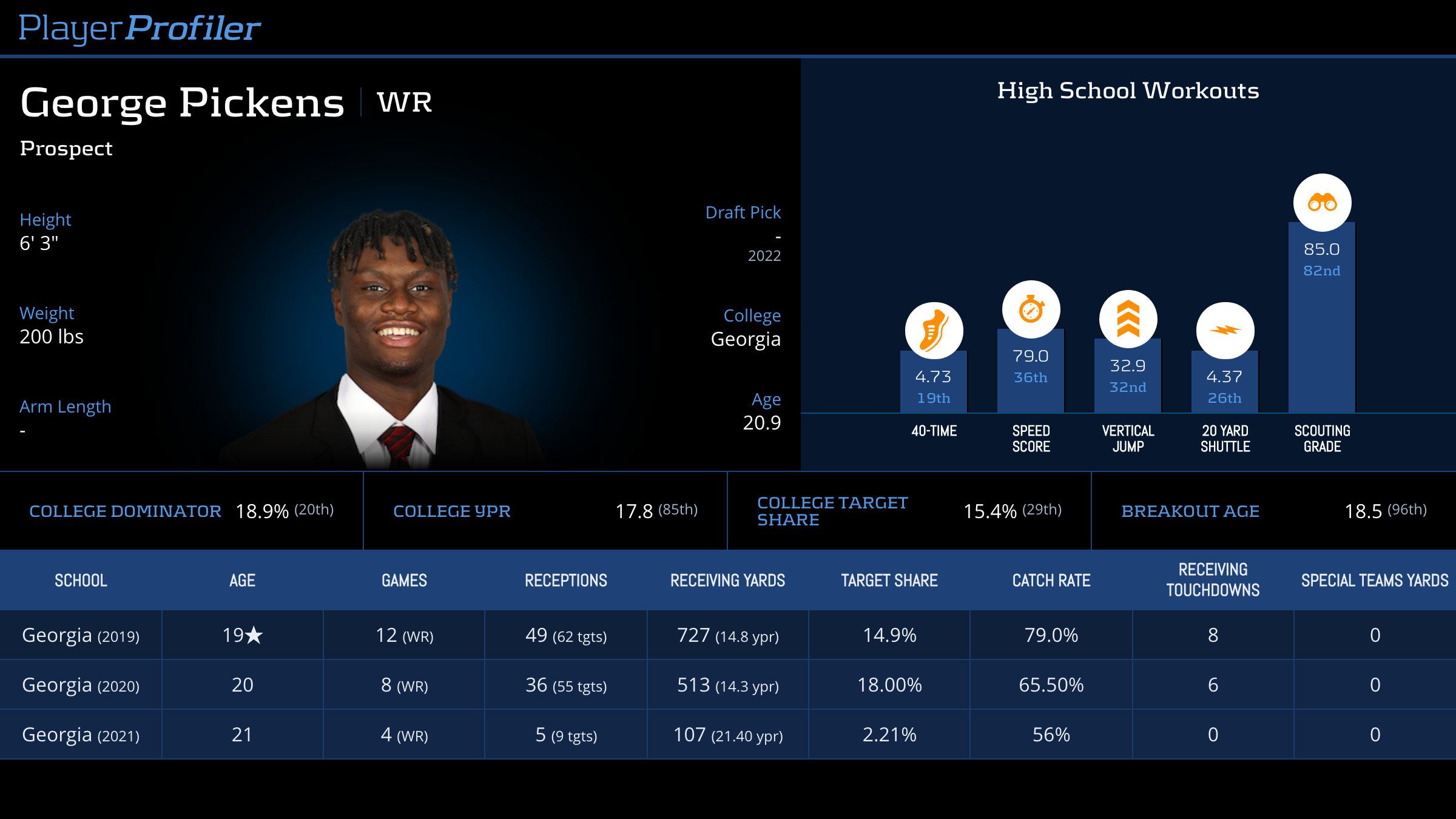 We have seen Mike Tomlin Steelers teams use rookies receivers with confidence: JuJu Smith-Schuster, Diontae Johnson, Chase Claypool, and Pat Freiermuth all had fantasy success in their rookie seasons. Pickens should be no different. He is one of the best upside WR plays in this round.

We finally see our first QB on the list. The Lance era begins in San Francisco, and he could provide immediate returns in fantasy. Lance has the ideal combination of rushing ability and the ability to throw the deep ball. He has one of the best trios of receivers in the NFL in Deebo Samuel, Brandon Aiyuk, and George Kittle. Lance is the best bet to return value if you want to wait on QB.