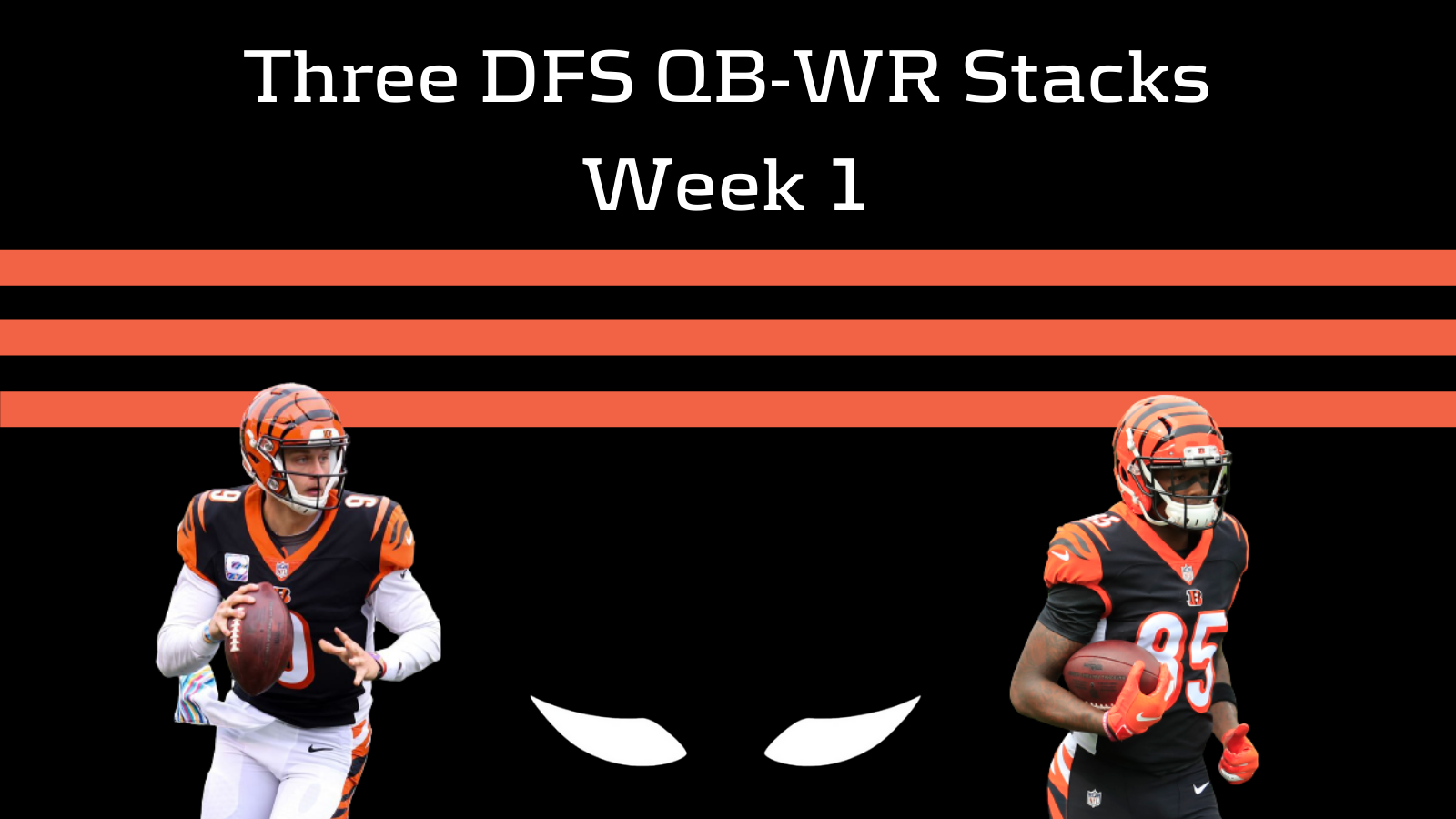 Hello World! After another long off season, we have made it to Week 1. That means it’s time to get back into DFS mode as we chase tournament glory (and cash prizes). If you weren’t here last year, this will be a weekly series with the aim to highlight under the radar QB-WR stacks to build around in DraftKings GPP tournaments. The advanced stats and metrics found only at PlayerProfiler will serve as our guide along the way.

To formalize the discussion, a stack involves playing a QB and at least one of his pass catchers in the same lineup in daily fantasy football. Those positions are naturally correlated as any passing points scored are shared between the passer and receiver. In this series we’ll typically identify pairs of QBs and WRs, though in some occasions multiple WRs will be called out.

Stacking has become an integral part of DFS roster construction strategy in both large field GPP tournaments and even smaller field head to head and double up type contests. By rostering a player, we are making a bet that they will rack up fantasy points this week.

By utilizing the correlation inherent to stacking, we are in effect reducing the number of bets that a lineup makes. Fewer bets mean fewer chances to be wrong, or in other words, the fewer times we need to be correct to win.

There are a few considerations that go into selecting stacks each week. The first is game environment. Games projected to be high scoring represent obvious targets for stacking as more points scored tend to lead to more fantasy points. Second, we want QBs that combine high floors and high ceilings. That is achieved two ways: QB rushing or tremendous passing volume. This is a new era in the league featuring several QBs capable of leading their teams in rushing. With fantasy scoring so slanted towards rushing production over passing, true pocket passers need excessive volume to hope to replicate dual threats. Third is WR target share. By stacking, we’re betting that if our QB scores well, so will our WR. That only happens if the QB is scoring by actually throwing to our WR. We’ll typically be choosing WRs who have a chance at seeing a heavy target share.

With that introduction out of the way, let’s turn our attention to the stacks for week 1.

This stack checks every box listed above and costs under $11k on DraftKings this week. In the dome in Atlanta, this game features a 48.5 over under total. The offenses will be firing in this one. In the four games Jalen Hurts started last year, he averaged 11.5 rush attempts per game. Lamar Jackson led the league last year with 10.6 rush attempts per game. Hurts will undoubtedly be among the leaders this year in QB rushing. Combine that with his 89.7 (94th-percentile among qualified quarterbacks) College QBR and you have a QB capable of generating huge fantasy totals in the air and on the ground.

Devonta Smith looks like the number one wideout in Philadelphia. The rookie enters Week 1, however, as the fourth-cheapest team WR1 by PlayerProfiler projection and second-cheapest team WR1 by DraftKings salary. That is despite coming off a college career where he posted 51.3-percent (96th-percentile) College Dominator Rating at Alabama featuring a Heisman trophy winning campaign last year. Take advantage of the value while DK and other fantasy gamers worry about the rookie translating to the NFL and a nebulous target share.

Another rookie being too heavily discounted this week is Trevor Lawrence. The number one pick in the draft gets a dream matchup to start his career against the blatantly tanking Houston Texans. Even with a lower game total, the Jaguars are still seeing an implied 24 points, meaning there will be fantasy points available. Lawrence had over 175 rushing yards each year in college showing that he can be a tactical scrambler as well.

We’re pairing Lawrence with Marvin Jones. All the way down at $3.6k, Jones is simply too cheap compared to the other Jags receiving options given the ambiguous target distribution. Jones, who has a history of splash game performances, is coming off a season in which he was top 12 in both Air Yards (1,398) and Deep Targets (22).

In the introduction, we mentioned two ways a QB can unlock ceiling performances in fantasy football. Rushing production is one avenue. The other can be achieved through prolific passing volume. Joe Burrow rushed just under 4 times per game last year, but with 40.4 (No. 3) Pass Attempts per Game, that volume can lead to big time fantasy performances. The Bengals notably invested in the passing game drafting Ja’Marr Chase this offseason which suggests they don’t plan to let up on that approach.

Despite the highest ADP among Bengals WRs, Tee Higgins costs the cheapest of the three starters at only $4.7k. Higgins had an excellent rookie season in which he earned 6.8 Targets per Game and 24 (No. 10) Deep Targets. With a strong college profile featuring a 18.6 (96th-percentile) Breakout Age, Higgins projects to build upon that performance in 2021.

A goal of this series is to identify low rostered stacks that aren’t consensus. In all three recommended stacks, we’ve chosen cheap WRs in offenses with ambiguous target distributions. That’s intentional this early in the season. Where other fantasy gamers will want to avoid that uncertainty, we are intentionally seeking out opportunities for break out performances that can really separate our lineups from others. Remember, in these large field GPP tournaments, it’s not about how often we’re right but rather how much we win if we’re right.