Everyone wants the new, flashy thing. It could be a car or a gaming console. It could also be young, rising NFL player looking to make a name for themselves for their fantasy teams. Sometimes, old reliable can get the job done, and that’s the case with these five players. Fantasy gamers are leaving these guys to rot while they still have plenty to give. No one will go ‘ooooooh!’ or get upset they got sniped on one of these guys, but they can all help your team win in 2022 and that’s all that matters. I present to you, The forgotten fantasy veterans to target in 2022.

Did you belch out an earnest ‘damn it!’ once the news of Melvin Gordon re-signing with the Denver Broncos broke? I know I did as a card-carrying member of the Javonte Williams bandwagon. Williams and Gordon formed a potent two-man punch in 2021 with a workload split nearly identical to each other. Williams saw 203 carries a year ago. Gordon also ran the ball 203 times. Williams did edge Gordon 53-38 in the target department, but Gordon also missed a game. In total, despite a near 50-50 split, Williams’ 205 weighted opportunities and Gordon’s 183 weighted opportunities both ranked in the top-20. Williams finished No. 13 among running backs, and Gordon finished No. 19. It sounds like more of the same is on tap for 2022.

Javonte Williams, on how he'll work with Melvin Gordon:

"The way that we were last year, I think that we’ll be the same way this year. Everything will be good, and we’re just trying to win games."

Gordon may not be what he was in his heyday, but he still had juice as early as last season. Maybe he falls off this season, but he hasn’t yet. I’m not suggesting he will supplant Williams by any means; in fact, I expect the contrary. It seems like a formality that both running backs will get work on what should be an explosive, fast-paced offense. In the event an injury befalls our beloved Williams, Gordon has borderline RB1 upside. That sounds a lot like fantasy darlings A.J. Dillon and Tony Pollard. Yet, when looking at veterans to target in 2022, Gordon’s ADP according to Underdog (110) lags way behind Dillon (73.1) and Pollard (88.3). Gordon is not a sexy, fun name to draft in 2022, but it isn’t hard to see him being a league-winner.

Look, Mike Davis might not even make the team. However, landing in Baltimore keeps his fantasy utility alive if J.K. Dobbins and Gus Edwards aren’t ready for the start of the season. They likely will be ready in time as both suffered torn ACLs in late August and have had nearly a full calendar year to recover for training camp. Both still could open training camp on the PUP list (the training camp version; not the one that would force them to miss the first six games of the 2022 season) once camp arrives. 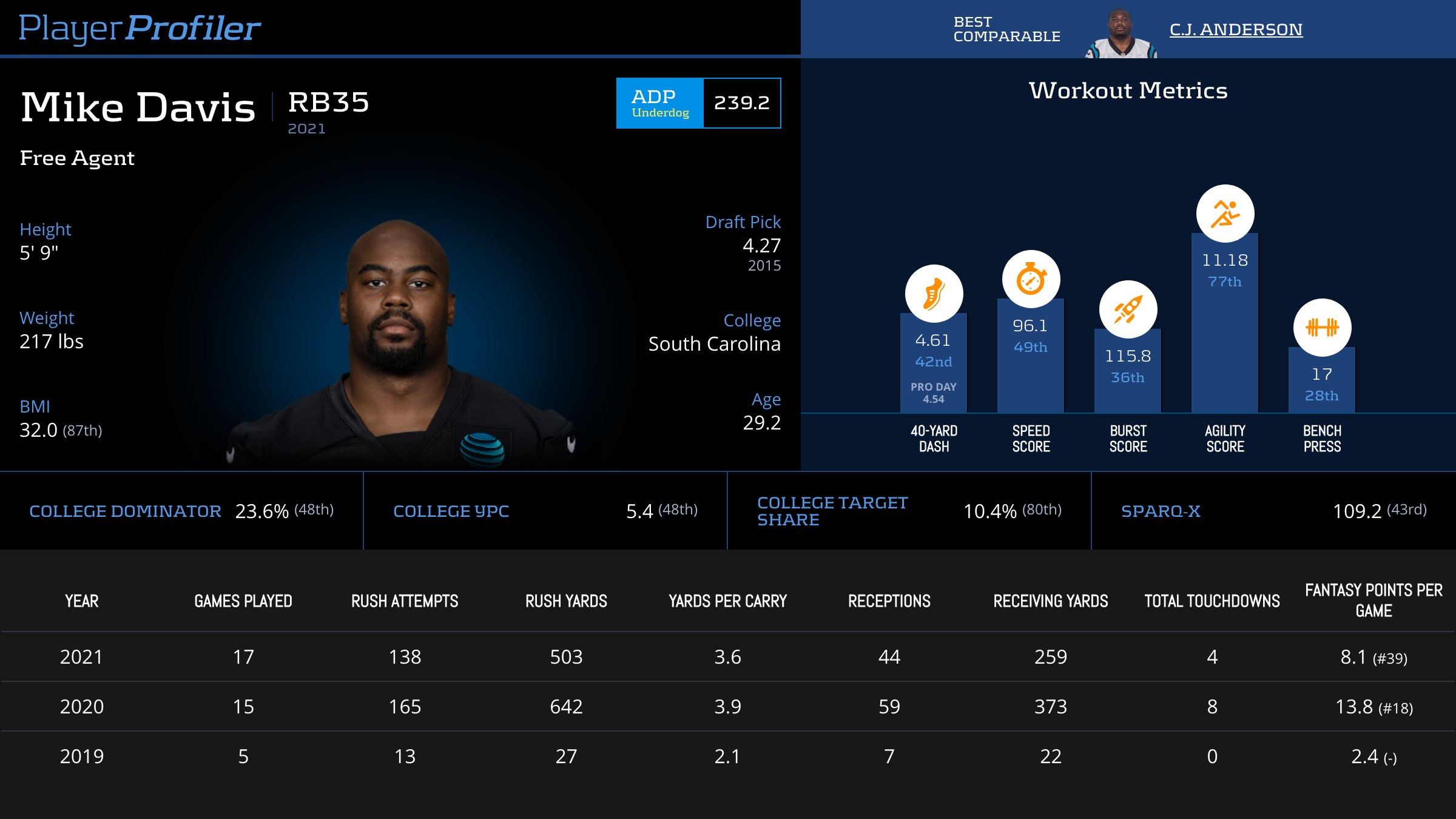 However, rehabbing ACL injuries are tricky. Anybody can pull a hamstring, but players coming off a torn ACL seem to get nicked here more than others. If neither Dobbins nor Edwards is ready for the regular season, Davis would be instantly fantasy viable. Lamar Jackson breeds running back fantasy production since he became Baltimore’s starting quarterback. If you want proof, look no further than Baltimore’s running back stable last season. Devonta Freeman gave an 11-week flashback to 2016 last season where he averaged just under 12 PPR points per game. That would’ve tied Chase Edmonds‘ RB27 per game mark last year. When looking at veterans to target in 2022, Mike Davis costs nothing. At least make Dobbins and Edwards prove they’re healthy before burying him.

Kenny Golladay can’t catch a break. Hamstring injuries derailed his last season with Matthew Stafford in Detroit. Last season’s situation in his first year with the New York Giants was so dire that the Giants literally gave up on the idea of throwing the ball as their season reached its merciful conclusion. In his last fully healthy season (2019), Golladay finished with a 1,190-yard, 11 touchdown season while hauling in 65 of 119 targets. In the four games, Golladay started and finished in 2020, he drew a 21-percent target share and either scored or exceeded 100 yards. Even in his lost 2021, he still managed to draw roughly a 21-percent target share in the games he and Daniel Jones both played before being foisted by the wrath of Mike Glennon and Jake Fromm.

Jason Garrett is a Caveman

Golladay did not produce in the caveman Jason Garrett-led offense but should be put in better situations to succeed under new head coach Brian Daboll. It’s unrealistic and unlikely to expect Daboll to transform Jones and this Giants offense into what he presided over in Buffalo. However, it is also impossible for the Giants to be as wretched offensively as they were a year ago when they finished dead last in the NFL in offensive DVOA. On top of that, where exactly is Golladay’s target competition?

Sterling Shepard tore his Achilles in late December. Both Evan Engram and Kyle Rudolph left the team this year. Between those three and backup running back Devontae Booker‘s departures, there are 215 vacated targets to be dispersed. That’s not counting the lesser known departures. The primary additions the Giants made were drafting diminutive slot receiver Wan’Dale Robinson in the second round and adding journeyman tight end Ricky Seals-Jones in free agency.

Golladay has never registered more than 120 targets in a season. When looking at veterans to target in 2022, however, there aren’t many obstacles in his way to that mark this season. The Giants are finally stepping into the 21st century on offense, don’t project to have a stellar secondary, and the lone proven commodities Golladay is competing with are Saquon Barkley and Kadarius Toney (a second-year receiver with 39 receptions under his belt who was in trade rumors a couple of months ago).

Golladay may not be the alpha the Giants thought they were paying for last year, but he’ll get used like one this season and did manage to finish No. 25 among receivers in air yards share (30.2-percent) and No. 10 in average target distance (13.3). Golladay’s ADP on Underdog currently sits at 123.5, behind receivers Tyler Boyd, Jameson Williams, and Rondale Moore. That’s not bad for someone who should lead his team in targets and was a top-10 fantasy receiver two years ago.

When looking at veterans to target in 2022, what if I told you Cole Beasley has posted 82 receptions in each of the last two seasons and has averaged 108 targets the last three seasons? Now imagine Beasley magically becoming over three years younger. What you get is Crowder. Crowder and Beasley averaged an identical 6.2 yards per target despite the fact that Crowder played for the Jets while Beasley caught Josh Allen missiles. He averaged more yards after the catch per target (3.0) than Beasley (2.7) last year. Crowder also edged Beasley in route win rate (Crowder’s 54.3-percent No. 1 among wide receivers) and expected points added. Saying the 2022 version of Crowder is an upgrade over 2021 Beasley is not farfetched. 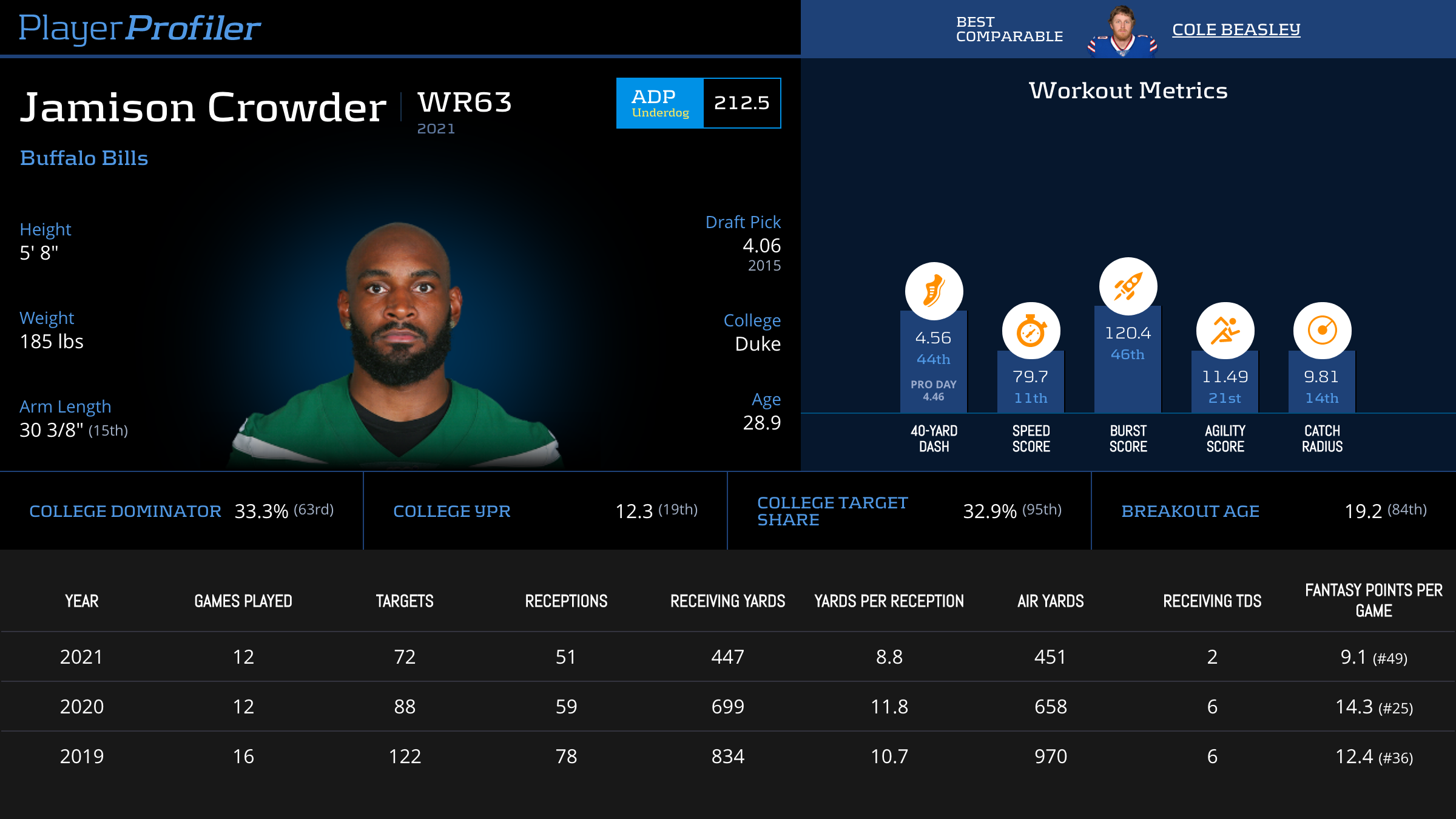 Everyone wants pieces of great offenses. If those pieces are cheap, then even better. Beasley was a top-36 receiver in 2019 and 2020 in Buffalo and probably would’ve been in 2021 had he scored more than one touchdown. Crowder should walk right into that role. Isaiah McKenzie has more juice and has balled in his few starts filling in Beasley but has been used as more of a gadget player than an every-down receiver.

The Bills also drafted a receiver who can win in the slot in Boise State’s Khalil Shakir, but Buffalo has kept younger receivers like McKenzie and Gabriel Davis on the bench in favor of veterans like Beasley and Emmanuel Sanders. I understand not wanting to draft receivers whose ceiling is around the WR30, but everyone needs depth, and if you want a cheap option (138.1 ADP via Underdog) on a great offense, Crowder is your man.

Did you know that Zach Ertz led the Arizona Cardinals in targets (81) since getting traded before Week 7 of last season? It makes sense since DeAndre Hopkins missed all but two games from Week 9 on, but it still is surprising. It is noteworthy too since Hopkins will miss the first six games of this season due to a PED suspension, Christian Kirk bolted out of town to Jacksonville, and the Miami Dolphins wrestled away Chase Edmonds. Ertz managed to attain a 22.3-percent target share since arriving in the desert and now 220 targets from last season will be up for grabs. Marquise Brown, whom Arizona acquired with their 2022 first-round pick, will surely play a large factor and should out target Ertz. Outside of Brown, Ertz’s competition includes the likes of misused Rondale Moore, the aging AJ Green, and Antoine Wesley. What’s stopping Ertz from being fed eight targets a game while Hopkins sits? 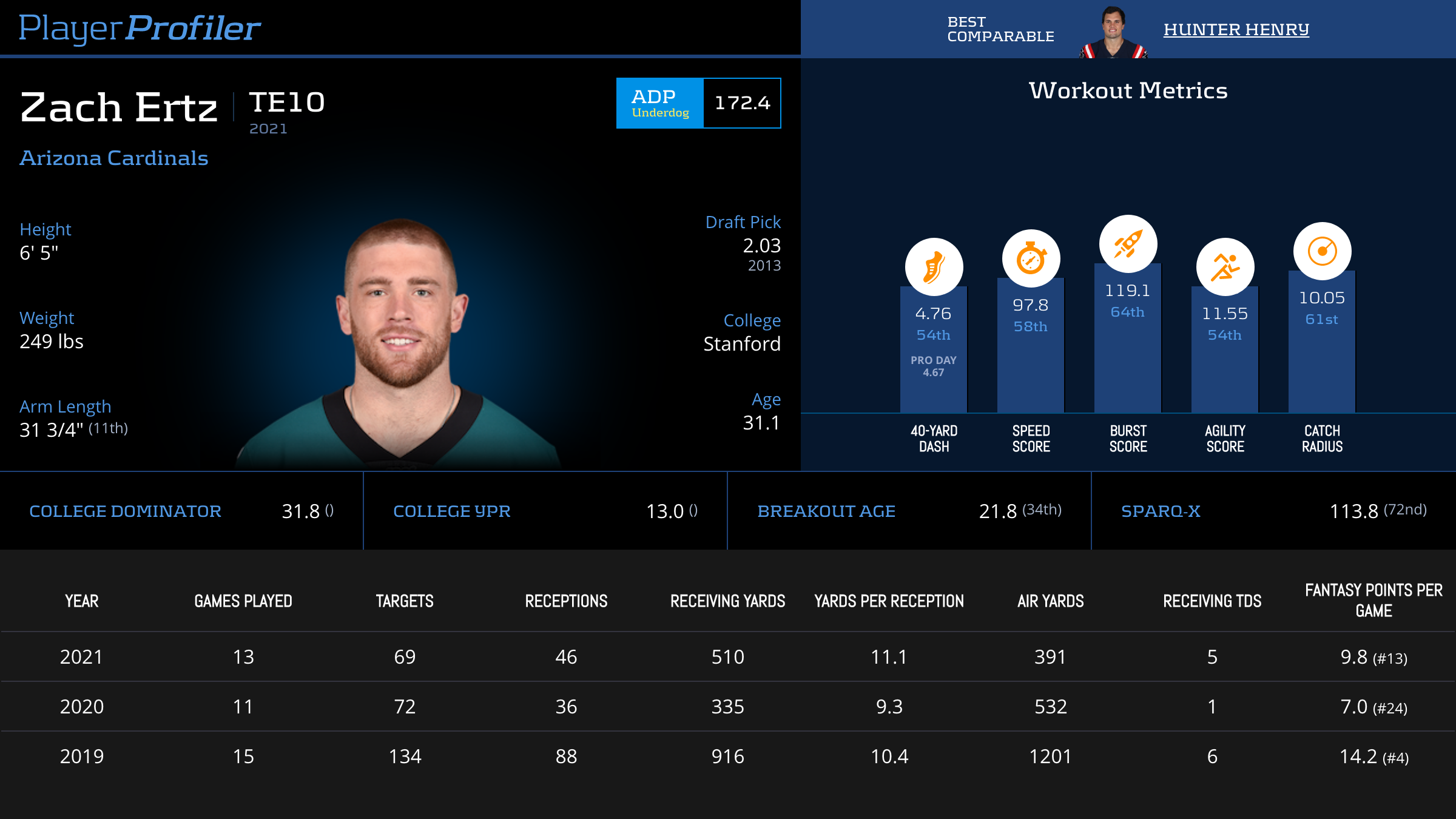 As mentioned before, it’s always great to target players in great offenses. Kyler Murray and Arizona’s offense resurrected Ertz. Ertz finished in the top-10 among tight ends in numerous stats, including targets (No. 3), air yards (No. 8), red-zone targets (No. 6), yards per route run (No. 9), expected points added (No. 8), and fantasy points per route run (No. 9). He finished as the TE5 in PPR formats. His current ADP on Underdog sits at 110.8. When looking at veterans to target in 2022, if you like to punt the tight end position, you can do a lot worse than Ertz.