The current world record holder in competitive cup stacking is Hyeon Jong Choi. According to the World Sport Stacking Association, he can stack and unstack three separate triangles of cups in 1.322 seconds.

If you have followed PlayerProfiler’s best ball content lately, Choi may be the only person on Earth more passionate about stacking than we are.

From these pieces, we know why stacking is important: it minimizes the amount of correct assumptions you need to make, and maximizes the benefit from each correct assumption. In this two part series we move past the why in favour of the what, and the who. Today, we’ll discover the essential elements of a league-breaking stack, with a sneak preview of one of my favourites. In part two, we’ll dig deep into the best candidates for 2021.

In 2020, teams who drafted Josh Allen and Stefon Diggs had a 42-percent advance in rate in Underdog’s Best Ball Mania. That is a 250-percent increase over expectation! Almost anyone who built a strong roster around this stack won a free ticket to the playoffs.

While this year’s Diggs-Allen stack is one of drafters’ most sought after, it won’t be the most profitable. In this article we’re not talking about 2021 Allen-Diggs. We’re finding the next 2020 Allen-Diggs: a stack combining two players at affordable ADPs with an elite ceiling when hitting together.

Unlike DFS, best ball allows you to generate multiple benefits from a stack:

The second path can only be maximized if a stack has enough room to smash its market expectation. This is not to say you should avoid premium stacks, but hitting big on a lower-priced option is the most expedient way to break your league wide open.

The History of the League-Breaking Stack

I charted the most impactful stacks over the past seven years in terms of their value relative to ADP in points per game. In general, I restricted the list to stacks in which neither the quarterback nor pass catcher were being drafted as an elite option at their position. I made exception for cases in which the wide receiver made a significant enough jump to warrant consideration.

As you can see in the ‘Legend’ and ‘Archetype’ tables, a set of common themes emerged. 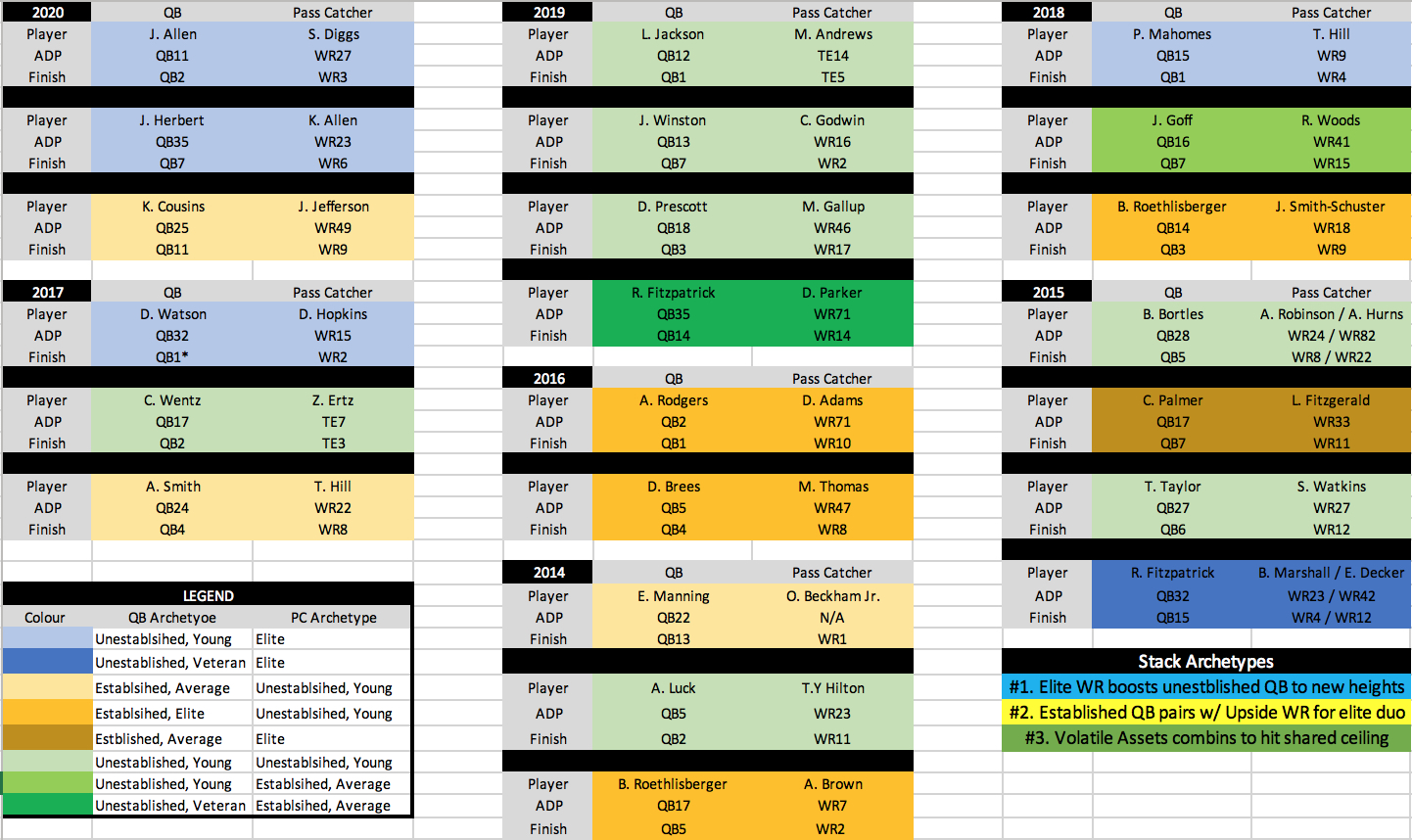 One notable exclusion from the list is a young quarterbacks and a veteran they have previous experience with. When a rookie-contract quarterback landed on this list, they nearly always did so in their first year, with a fellow rookie-contract player, or with a new addition to the team.

Suffice to say, if Joe Burrow or Tua Tagovailoa make a major leap forward this year, it probably won’t be because of DeVante Parker or Tyler Boyd.

In the simplest terms, the formula for these stacks is ‘known + unknown’ or ‘unknown + unknown.’ All three archetypes share a high degree of ambiguity, and a wide range of outcomes.

Often the ramifications of these stacks go beyond a player surpassing expectations. As I stated in my case for Rashod Bateman, personnel drives play-calling. When a wide receiver provides elite play for an offense, it makes the quarterback more efficient, the offense more efficient, and often more pass heavy as a result. The market greatly over-estimates the stability of situational factors such as a coach’s history or defensive efficiency.

Consider Stefon Diggs‘ impact on the Bills last year, or A.J. Brown‘s impact on the 2019 Titans. On the other side, reflect on the impact of smash-success rookie quarterbacks. Justin Herbert and Deshaun Watson immediately changed the tenor of their offenses in their rookie years. When one member of a stack plays elite football, it sets off an avalanche of correlated factors, which shatter the glass ceiling of their fantasy projection.

Another notable inference from the list above is a second high-end pass catcher is not a death-knell for a breakout stack. Several of the stacks wide receivers played with another high-end option and either surpassed them, or succeeded alongside them. ‘Too many mouths to feed’ is not a concern. Because the efficiency and volume of the pass game is materially influenced by the success of players within the stack, there is a surplus of food to go around.

Upside is a Factor of Uncertainty

The easiest path to league-winning upside is youth. Of the 22 stacks included above, 18 included at least one player with two or less years of NFL experience. 11 of the 22 have include a rookie or sophomore. This is backed up by Shawn Siegele’s work showing second year wide receivers to be the “key to fantasy titles.” 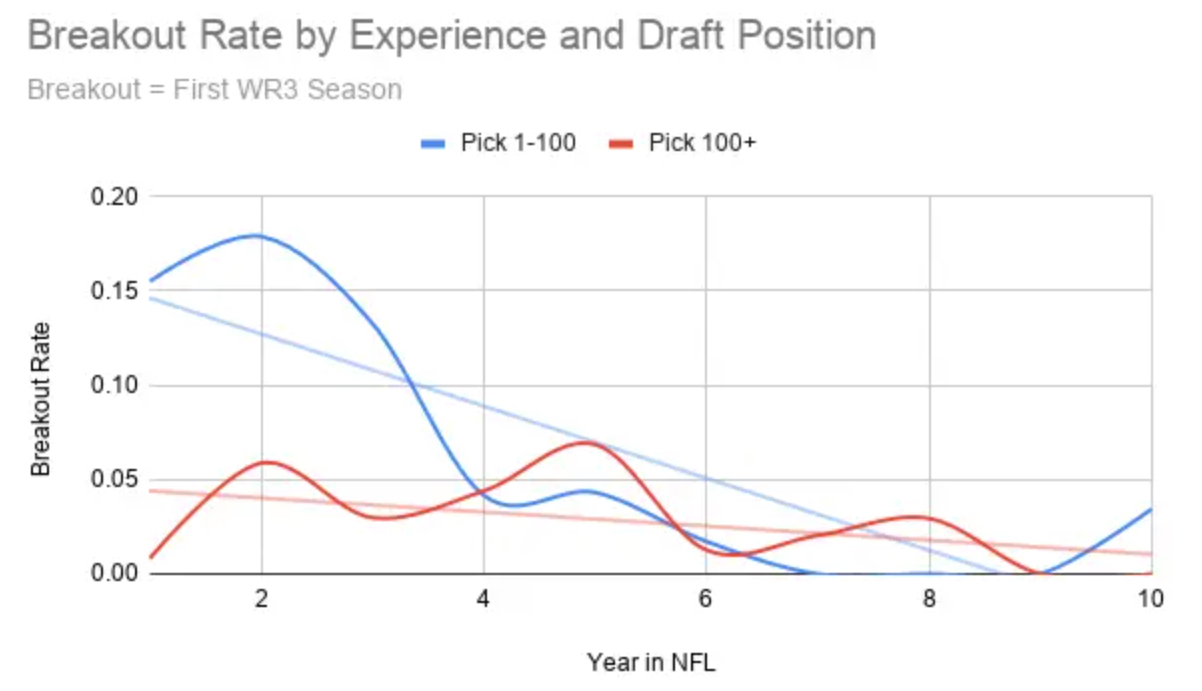 Among the four all-veteran pairings, all but one (Ben Roethlisberger and Antonio Brown in 2014) included at least one member of the stack recently changing teams.

Uncertainty can take shape in a number of ways, but it is the best path to league-breaking upside. The fantasy market is rather sharp at comprehending upside. If ADP simply matched projections, Tony Pollard would not have an ADP two round ahead of David Johnson. Fantasy gamers are aware each asset exists within a range of outcomes, and ADP attempts to incorporate the aggregate of that range.

As I derived in Part I of my Lessons from DFS for Best Ball series, true ‘upside’ is most effectively captured by making positive assumptions in ambiguous situations. Tournaments are won on the tails of your range of outcomes, and the easiest way to maximize your tail is to increase your variance.

When looking for a league-breaking stack, we should search for stacks with as many factors of uncertainty built into their price as possible. These stacks have the most room to crush their ADP because the range between their ceiling and floor outcomes is widest.

Candidates for League-Breaking Stacks in 2021

History guides us toward a set of criteria to look for in our league breaking stacks for 2021. Here is our checklist:

Without any advanced analysis, here are the qualified candidates based on the above criteria. I also included a list of honourable mentions who miss the technical criteria based on ADP or years of service, but fit the broader themes. I did not include any Colts, Broncos or Texans options as their quarterbacks are currently going undrafted in a majority of best ball tournament entries. 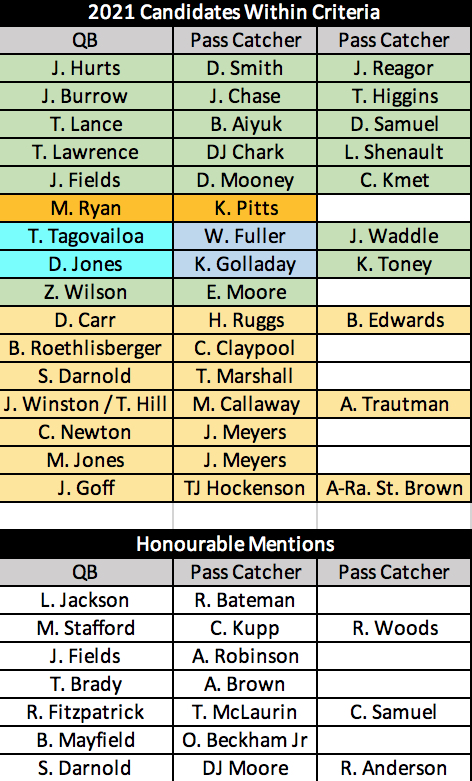 The Candidates for the 2021 League-Breaking Stack

My first takeaway is that drafters are sharper in 2021 than ever before. I ordered this list by the quarterback’s ADP and the options with the greatest youth and widest ranges of outcomes make up the most expensive section of the list.

My second is the dearth of options in the blue category: unproven quarterbacks with stud wide receivers. This was the category which gave us Stefon Diggs/Keenan Allen and Josh Allen/Justin Herbert in 2020. The ADPs of Allen Robinson and Justin Fields denote increased market confidence in this archetype after last year’s success.

Another factor is the influx of mobile quarterbacks into the NFL. Looking at the 2014-2020 chart you’ll see pocket passers such as Jared Goff, Ben Roethlisberger, Drew Brees, and Carson Palmer post upper-half QB1 performances. That may no longer be within the range of outcomes.

For this reason, I am very skeptical of the chances Brady, Matt Ryan, or Mathew Stafford offer much upside beyond their ADP. If I am targeting a quarterback to break my league, they need rushing upside: at least at the goal line. For this reason I’m more inclined to target stacks around the three rookies and Jalen Hurts. Each has rushing upside, a wide range of outcomes, and is paired with multiples young weapons possessing breakout potential.

In best ball, a late-round QB2 performing at the level of a high-end QB2 has significant value: especially in two quarterback builds. If a pocket passer is to feature in the most impactful stack this year I’m betting it’s a round 16-18 quarterback providing round 10-12 value, propelled by an elite wide receiver.

Hitting on this combination may have a lower direct payoff, but it provides pathways to ceiling from the rest of your roster. Consider a two quarterback build with Ben Roethlisberger and Chase Claypool.

Claypool was an absolute beast in 2021 and people don’t fully realize how much. 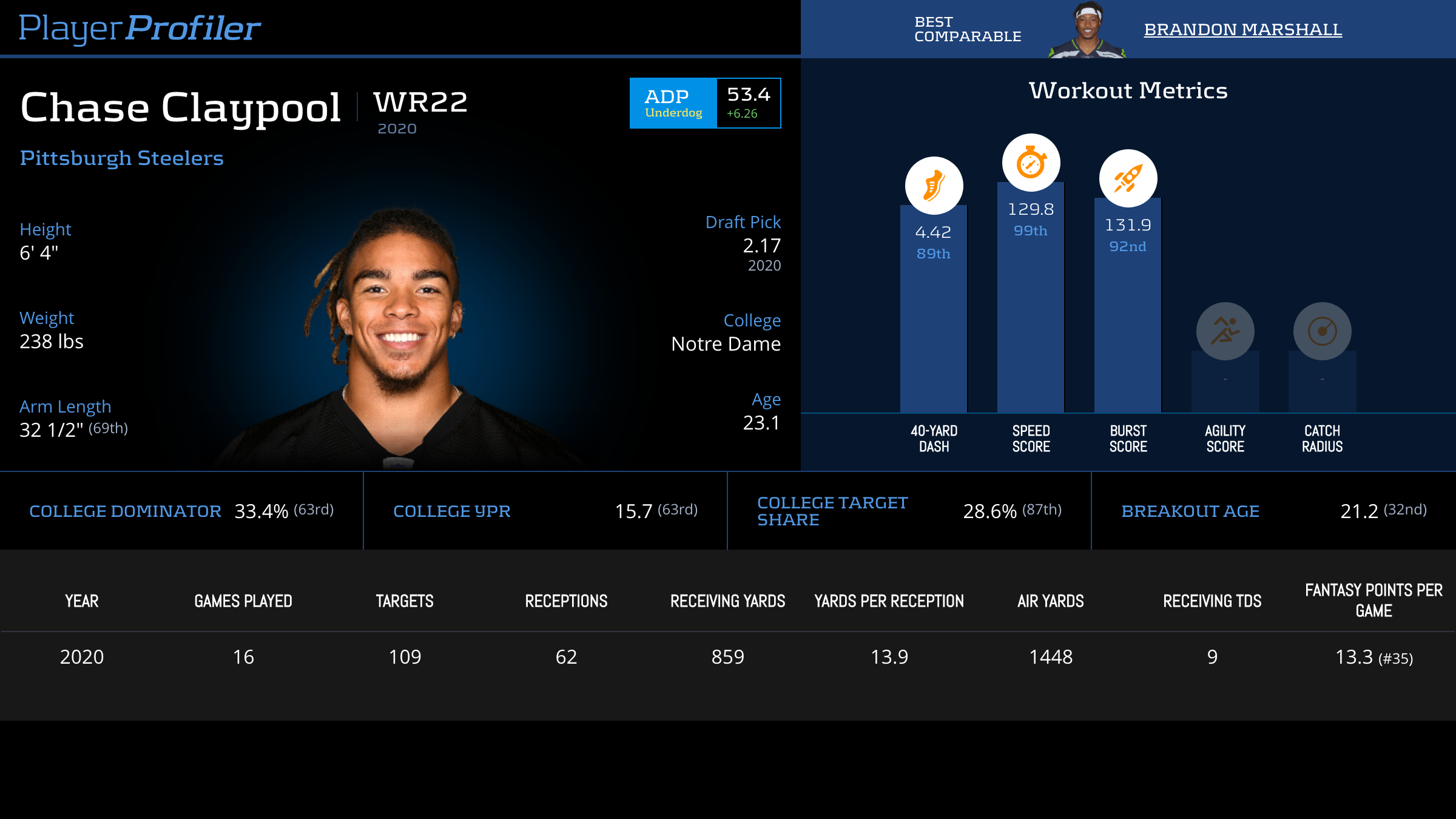 Per the Data Analysis Tool, no wide receiver among the impressive 2020 rookie class drew more targets per route than Claypool’s 25.2-percent (No. 16 among qualified wide receivers) Target Rate. His perception as a low-volume option is due to his 65.9-percent (No. 90) Route Participation rate.

Claypool was by far the most efficient Steelers receiver on a per-route and per-target basis. If he is entrusted with a full-time role in 2021, it is quite conceivable he outhits his WR26 ADP by a wide margin, and drags Roethlisberger to a more efficient 2021 season. If Roethlisberger provides round 10-12 value as your QB2 drafted in round 16, you benefit from your stack crushing ADP. As well, you preserve the opportunity to select a high upside receiver or running back where your league-mates draft their QB2.

Who is the League-Breaking Stack of 2021?

Come back soon to find out!

In part II of this series I will analyze five stacks you need to target to break your league in 2021. For now, consider – based on the trends discussed above – who your favourite stacks are.

Tournaments are won on the tails, and following this process will help you maximize your chances to hit them.