Human beings are naturally averse to change. The brain’s amygdala interprets change as a threat, which triggers the release of a fight or flight response. This biological phenomenon helps explain why dynasty players could not fathom the Jaguars drafting Travis Etienne to replace James Robinson. It’s why Stefon Diggs was faded last year because of his offense and quarterback. It’s why Rashod Bateman will be a major value in your dynasty rookie drafts and start-ups.

The narrative is already a runaway train. Lamar Jackson is inaccurate, he runs too much, and any wide receiver drafted in ‘Charm City’ is destined to be a fantasy bust on the team that ‘ruined Marquise Brown.’ So when Minnesota’s Bateman was selected No. 27 overall by the Ravens, he was doomed to failure by the masses.

Sharp dynasty leaguers are not ruled by their misguided amygdala. They use PlayerProfiler’s advanced stats and metrics to help them focus on the right details and ask the right questions. What if Jackson can improve his passing efficiency in his third year as a full-time starter? Will the Ravens enact a more pass heavy scheme after adding a new wide receiver? What if their defense regresses and requires more passing? Is Bateman is significantly more talented than Brown? (Yup.)

The Fallacy of Situation-Based Analysis

Here’s the dirty little secret about those who preach situation before talent.

If you blame the situation for your favorite player’s failure, you never have to be wrong. You can push the blame onto the coach, or quarterback, or the helmet decal every time you miss. Because I am not a coward, I believe in my player evaluations. I expect my targets to hit wherever they’re drafted. When they fail, I own my mistake and work to get better.

There is no such thing as a lock in the NFL draft. But if you’re going to make a bet on someone, you want to bet on prospects that produce like Rashod Bateman.

The chart below is a full list of wide receivers who were early declares, had at least a 30.0-percent College Dominator Rating, a Breakout Age younger than 20.0 and were drafted in the first round between 2003-2018. I also included A.J. Green and Calvin Ridley who broke out at 20 years old but in their first college season. This is a very strong group of players to associate with. 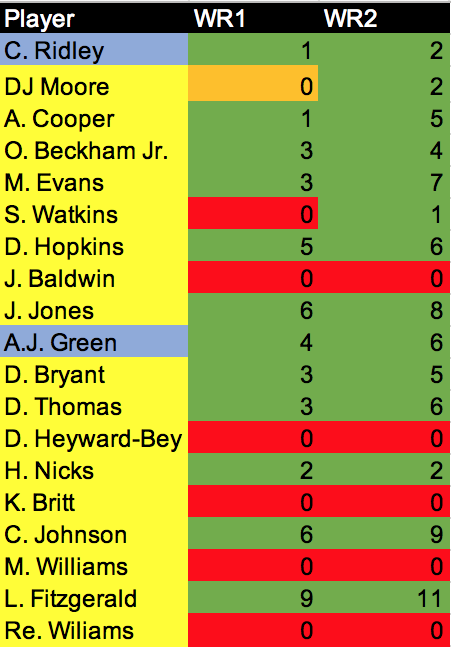 Half of this list turned into perennial studs, while the majority turned in multiple fantasy relevant campaigns. Bateman also possesses sufficient size and athleticism, and age-adjusted production that far surpasses the thresholds mentioned above. There is little data-based reason to foresee a Bateman bust.

Much has been made of Jackson’s supposed inaccuracy. His 75.8-percent (No. 27 among qualified quarterbacks) Catchable Pass Rate is, on the surface, reason for concern. However, he ranked No. 4 with 8.6 Air Yards per Attempt. Per this great thread by @QBDataMine, Jackson ranked No. 7 in depth-adjusted accuracy, including No. 2 in accuracy on throws to or beyond the first down marker.

So is Jackson a top 10 passer? Or in the basement of the league? The truth probably lies somewhere in the middle – but we have seen FAR worse quarterbacks support a WR1.

Some QBs who have supported a WR1 in the last 10 years:

“But The Ravens Don’t Throw”

For two straight years, the Ravens have been among the AFC’s best teams on the back of a top tier defense and a three-headed monster running game. Lamar Jackson has been efficient, evidenced by a 73.9 (No. 7) Total QBR, but it hasn’t translated to fantasy value for his wide receivers.

From 2019-2020 this has been primarily a result of Baltimore not throwing very often and not throwing to wide receivers at a high rate, funneling the pass game through tight end Mark Andrews. During that period, the Baltimore Ravens averaged only 423 pass attempts: last in the NFL. To make matters more challenging, only 50-percent of targets went to wide receivers, per Sharp Football Analysis. If this holds and only 212 targets are available for wide receivers going forward, there is no doubt Rashod Bateman will be hard-pressed to deliver significant fantasy value while competing for targets with Marquise Brown and fourth-round pick Tylan Wallace.

Fortunately, change happens swiftly in the national football league, and we should expect Baltimore to be more pass-happy moving forward both due to their own wishes and in spite of them.

The Jackson era has coincided with the Ravens ranking in the top ten in defensive DVOA per football outsiders for three years running. This is unlikely to continue. Defensive performance is historically half as sticky has offensive performance. While we should project Baltimore to be strong defensively this year, the correlation year to year in DVOA is very weak. In the near future, Baltimore will inevitably regress on defense, forcing the Ravens to throw more to keep up in games, even if they remain run heavy in neutral situations.

However, there is reason to believe the Ravens will soon embrace the forward pass.

From 2019 to 2020 with the same quarterback and offensive coordinator there was a 25-percent increase in the team’s Target Rate to wide receivers after losing Hayden Hurst, and with Mark Andrews and Nick Boyle missing time. That is because personnel drives tendencies.

A superstar wideout can transform an offense and quarterback

Don’t expect the Ravens to roll out an Air Raid offense any time soon. But the front office has dictated this offseason they want to throw the ball more often and more effectively. One only needs to think back to Justin Jefferson and A.J. Brown – who were drafted in a similar range to Bateman will be this year –to know elite young wide receivers can be league winners in run heavy offencss. Both Jefferson and Brown were WR1s in 2020, averaging 116 targets on offenses that threw an average of 501 passes. Neither quarterback was considered an elite passer prior to the addition of those respective star receivers.

Can Bateman Transform The Ravens Offense?

Is Rashod Bateman going to be Stefon Diggs, Justin Jefferson or A.J. Brown? Not likely in year one. But rookie picks demand positive assumptions because dynasty leagues are won when players hit their ceilings. If Bateman does, it will have an outsized effect on the way Baltimore runs its offence and how efficient of a passer Lamar Jackson can be.

As for his target competition, expect the former Golden Gopher to leave Marquise Brown firmly in the dust. Brown’s tenure as WR1-by-default turned a 25.2-percent (No. 12) Target Share into 25 (No. 7) Deep Targets and an uninspired average of 11.4 (No. 44) Fantasy Points per Game in 2020. Brown who ranked No. 78 in True Catch Rate and No. 96 in Contested Catch Rate – should return to the ‘stretch z’ role he is naturally suited for, leaving Bateman to assert himself as the X-receiver.

Tylan Wallace is an intriguing prospect with high-level production and a good value in in Round 4 of the NFL draft. But his athleticism leaves much to be desired and his draft capital dooms him to WR3/4 status at best out of the gate. He and the artist formerly known as Sammy Watkins will be little competition for Bateman.

Press the Button on Bateman

If Rashod Bateman reaches the elite ceiling his profile says is possible – it is within his range of outcomes to be a WR1 with Lamar Jackson at quarterback. Will Bateman reach that level? I don’t know. But if your goal is to avoid a bust, trade your rookie picks for Robert Woods. You’re drafting a rookie wide receiver to find a WR1 at a WR3 price point, and Bateman is the best bet to do that as soon as Ja’Marr Chase leaves the board. 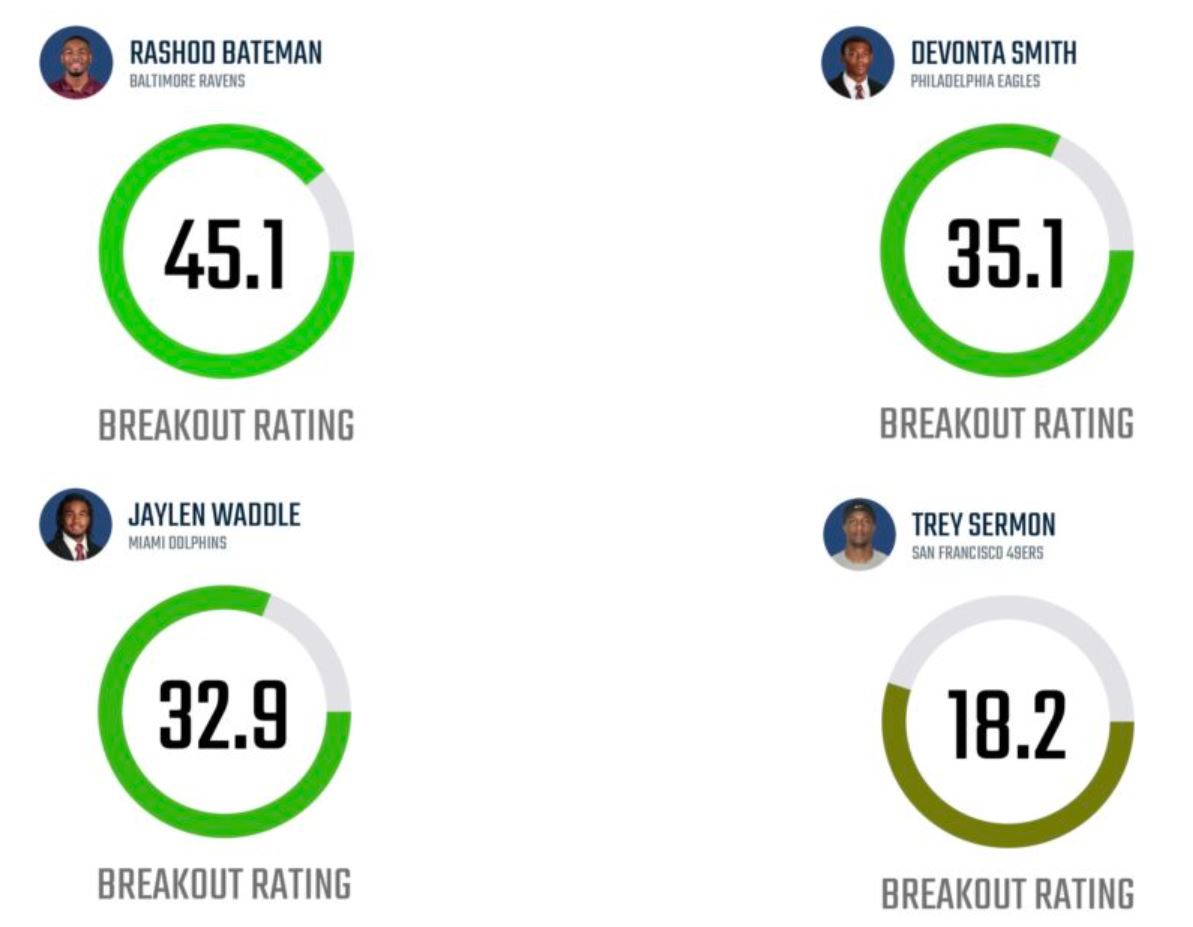 Dynasty leaguers who draft inferior profiles such as former Alabama wide receivers Devonta Smith, Jaylen Waddle, or Ohio State running back Trey Sermon chasing better draft capital or a better situation may wind up feeling regret for passing on Bateman when he imposes his will on the Baltimore passing attack and the NFL’s defenses.

To those players I leave you with a quote from another dominant Baltimore alpha: