The first of the three first round quarterbacks from 2018 signed their extension on August 6th. Josh Allen signed a six-year contract worth a quarter of a BILLion dollars. He joined Patrick Mahomes and Dak Prescott as QBs making over $40 million per year.

Once QBs sign their big post-rookie contracts, the clock starts to tick for their teams. How long will Buffalo’s window for competing remain open? Can they win a Super Bowl before Allen’s cap hit skyrockets? Is his extension a team-friendly contract? How does this affect Lamar Jackson’s extension talks? 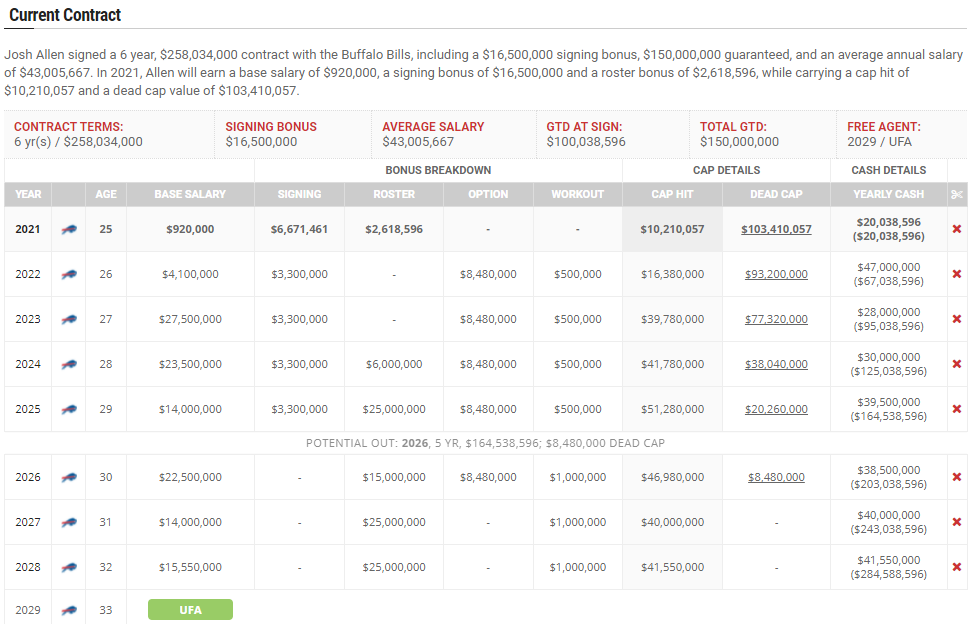 Josh Allen’s $100 million guaranteed at signing is the largest in the NFL. However, it’s misleading. Since his contract is worth $258 million, that means only 38-percent is guaranteed at signing. This offers salary cap flexibility for future restructures to create cap space.

Next season, Allen has another $52.4 million guaranteed on his contract. On top of $10 million of his 2024 salary guaranteeing, a 2022 $42.4 million option bonus is spread over five seasons.

His contract is structured to help the Bills compete in their current window. By 2026, he will only have $8.48 million in guaranteed money left. In the final two seasons of the contract, the rest of his contract will be guaranteed.

Those final three seasons of the contract are important in managing the team’s salary cap in the future. As long as Allen performs well, they will keep him past his Potential Out after 2025. If his play remains around his MVP performance, the Bills are willing to restructure and push guaranteed money onto those final three seasons (2026-2028). This allows them flexibility to restructure early and often in this contract to create cap space.

After studying Josh Allen’s contract, a question comes up. Why did the Bills put a $42 million option bonus that triples his signing bonus? The Bills would lose $77 million in cap space if they declined it. Essentially they are forced to accept the option bonus. 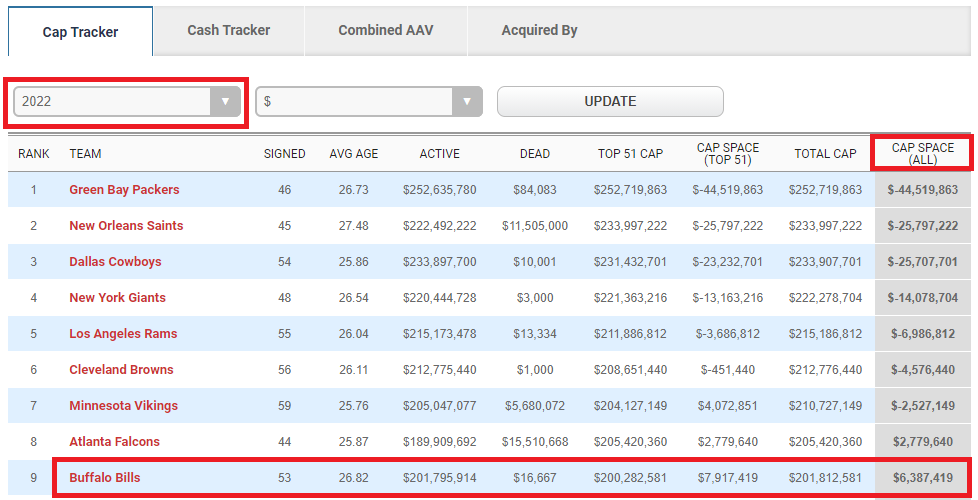 The Bills are strapped for cash in 2022. They currently project to have under $7 million in cap space. If the option bonus money had been signing bonus, the Bills would have had less cap flexibility in 2022. The option bonus is a win-win for the player and the team. Allen still gets his money. The Bills get cap flexibility to add pieces around Allen.

Restructuring Allen’s contract in 2023 would raise his 2024 cap hit to $47 million. That is projected to take up 20-percent of the Bills’ 2024 cap. For perspective, Russell Wilson’s NFL-leading $32 million cap hit takes up 17.5-percent of Seattle’s 2021 cap. Even if the Bills don’t restructure, they will be fine.

The Bills were a top AFC team last season and have improved in three consecutive years. I don’t see that changing in the next three. If it does change, it won’t be because Allen’s contract crippled the team’s salary cap. On the contrary, his extension allows Buffalo to extend their Super Bowl window all the way out to 2024 and keep or add key pieces.

Lamar Jackson Is Next 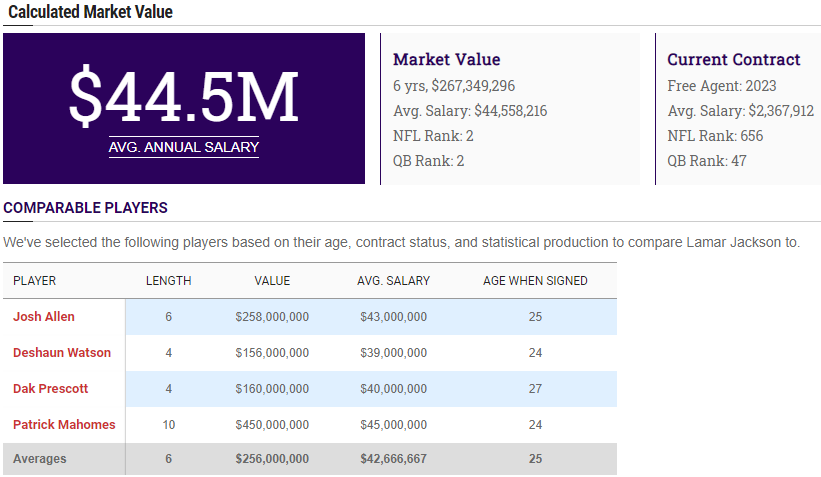 Whether you think Allen is better than Jackson or vice versa, it does not matter. The quarterback market gets reset more frequently than other positions. On occasion, a record-breaking contract can be outdone in the same offseason.

Look at the two franchises in Texas. The Dallas Cowboys couldn’t agree to a contract with Dak Prescott and placed the franchise tag on him last season. Meanwhile, the Houston Texans extended Deshaun Watson that same offseason. Watson got $39 million in average salary and $74 million guaranteed at signing. 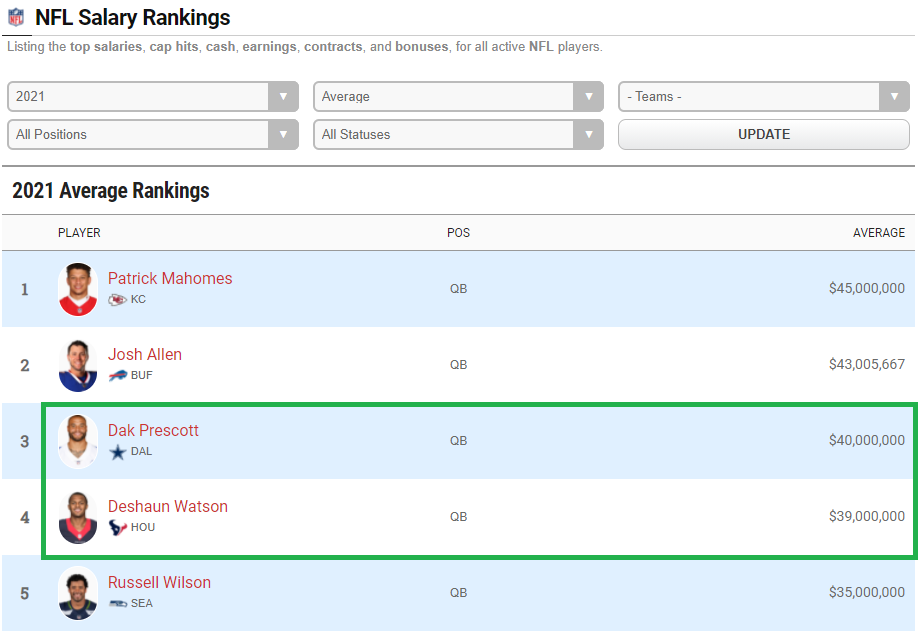 Six Months After Watson Got $39 Million AAV, Prescott got $40 Million AAV per Spotrac

Get ready to shell out the big bills, Baltimore. Jackson is set to receive an average salary of $44.5 million. Allen’s record-breaking $100 million guaranteed at signing will be topped by Jackson.

“But Salary Cap-tain,” minions and buzzards collectively moan.  “That’s too much! Click-bait!” Before a mutiny against your captain occurs, let me ask, “Is it that outrageous?”

With Josh Allen's extension done, Lamar Jackson is next.

I'm curious, how much guaranteed money AT SIGNING do you think Jackson will get?

I'm throwing a number out there:
$150 million.
@MyFantasyLeague

Tsk tsk, Twitter. How did 43-percent of you do in your economics classes? Not well, I suspect.

First, Ravens have $28.9 million (No. 13) in cap space in 2022. This allows them to give a proper signing bonus that the Bills could not give Josh Allen. Remember, the Bills gave him a $42.4 million option bonus because they lacked cap space in 2022. However, that didn’t count as guaranteed money at signing. 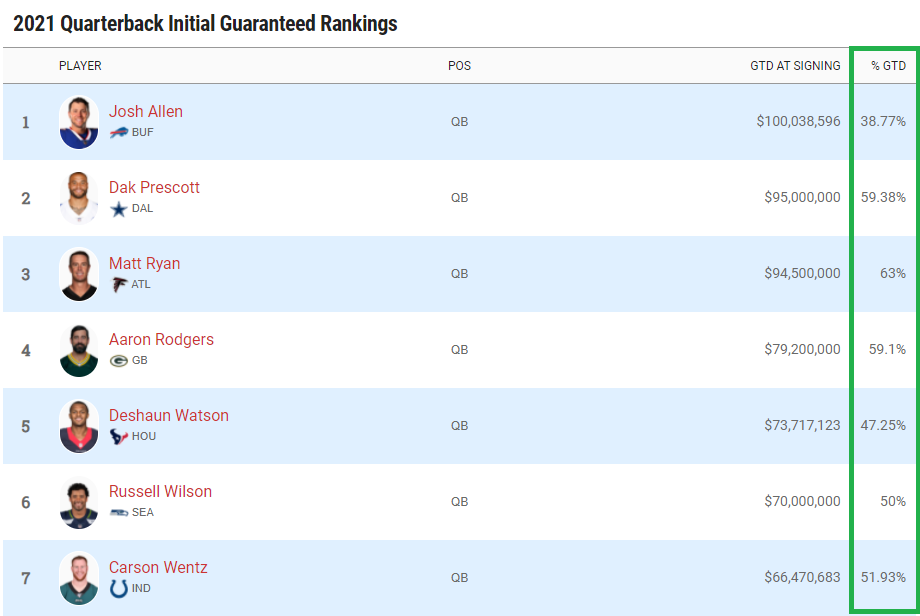 Guaranteed Money At Signing For Quarterbacks via Spotrac

Look at the six quarterbacks with the highest guaranteed at signing amounts after Allen. They all received at least 47-percent of their money at signing. On average, it was 55-percent. Let’s do the math.

Lamar Jackson has a calculated market value of $44.5 million AAV. If he signs a six-year extension, then his contract would be $267 million. On average, elite quarterbacks are getting 55-percent guaranteed at signing. 55-percent of $267 million is $147 million.

Not convinced? Okay, let’s go back to Allen. Let’s say the Bills had cap space in 2022 to give him a bigger signing bonus, instead of delayed guaranteed money in an option bonus. Take his $42.4 million option bonus and make it a signing bonus. He’s guaranteed to receive that bonus anyways.

That would give him $142.4 million guaranteed at signing. That would be 55-percent of his 6-year, $258 million contract.

A Salary Cap-tion for the aforementioned Twitter poll is: “43-percent of the voters have reconsidered their vote.”