Game-log cucks might fade Patrick Mahomes priced up at $8,000 but he’s worth the spend-up at the position. Mahomes should have no problem returning to fantasy relevancy with a visit from a Raiders team he dismantled (39DKPt) a couple weeks back.

The last time the Chiefs and Raiders played, Patrick Mahomes had 1:43 to tie or win the game… We all know what happened next.

Despite some rocky performances as of late, The Chiefs still rank No. 1 in a lot of passing categories including Pass Success Rate (No. 1), Pass Percentage (No. 1), and Passing TD Percentage (No. 5 with a 73.53-percent rate). Expect more of the same Sunday as the Raiders allow the No. 5 most Touchdown Passes to enemy quarterbacks (1.83 per game/average). In a game tied for No. 1 in Pace of Play, The Chiefs own a slate-high 28.75 Vegas team total.

Taysom Hill looks like another “cheat code” at the quarterback position. We know he has wheels, as evidenced by his 4.51 (99th-percentile among qualified quarterbacks) 40-Yard Dash and 128.4 (97th-percentile) Burst Score. In his return from injury, Hill managed 27.7 DKPt despite tossing 4 interceptions. He now faces a Jets team that ranks No. 5 in both Passing and Rushing yards allowed. Don’t be surprised if Sean Payton unleashes the duo of Hill and Alvin Kamara in a Belichick-ian rushing onslaught game plan. Run him naked as a salary saver or pair him up with Kamara.

The other pace-up spot to consider is the Chargers/Giants game. I say “game” but really we’re only interested in the Chargers side of the ball here, namely Justin Herbert. The game shouldn’t be all that competitive (Mike Glennon will start for New York) but that’s fine because the Chargers run the No. 6 fastest Situation Neutral offense (h/t Football Outsiders). They also aren’t afraid to hurt feelings too (speaking of Belichick). The Chargers run the No. 3 highest Passing Percentage when leading by 7-plus points (60-percent clip). Expect them to keep their foot on the gas. Mike Williams and Austin Ekeler are the clear cut pairing options with Keenan Allen expected to miss (COVID-19/Reserve).

With cheaper bellcow streamers soaking up ownership, Alvin Kamara is a light-chalk leverage play in a smash spot against the Jets. The Jets have had no answer for enemy running backs allowing a league-worst 36.9 DKPt/game average. Ranking last in Rush Percentage Inside 10 has resulted in 18 enemy rushing touchdowns (also league worst). 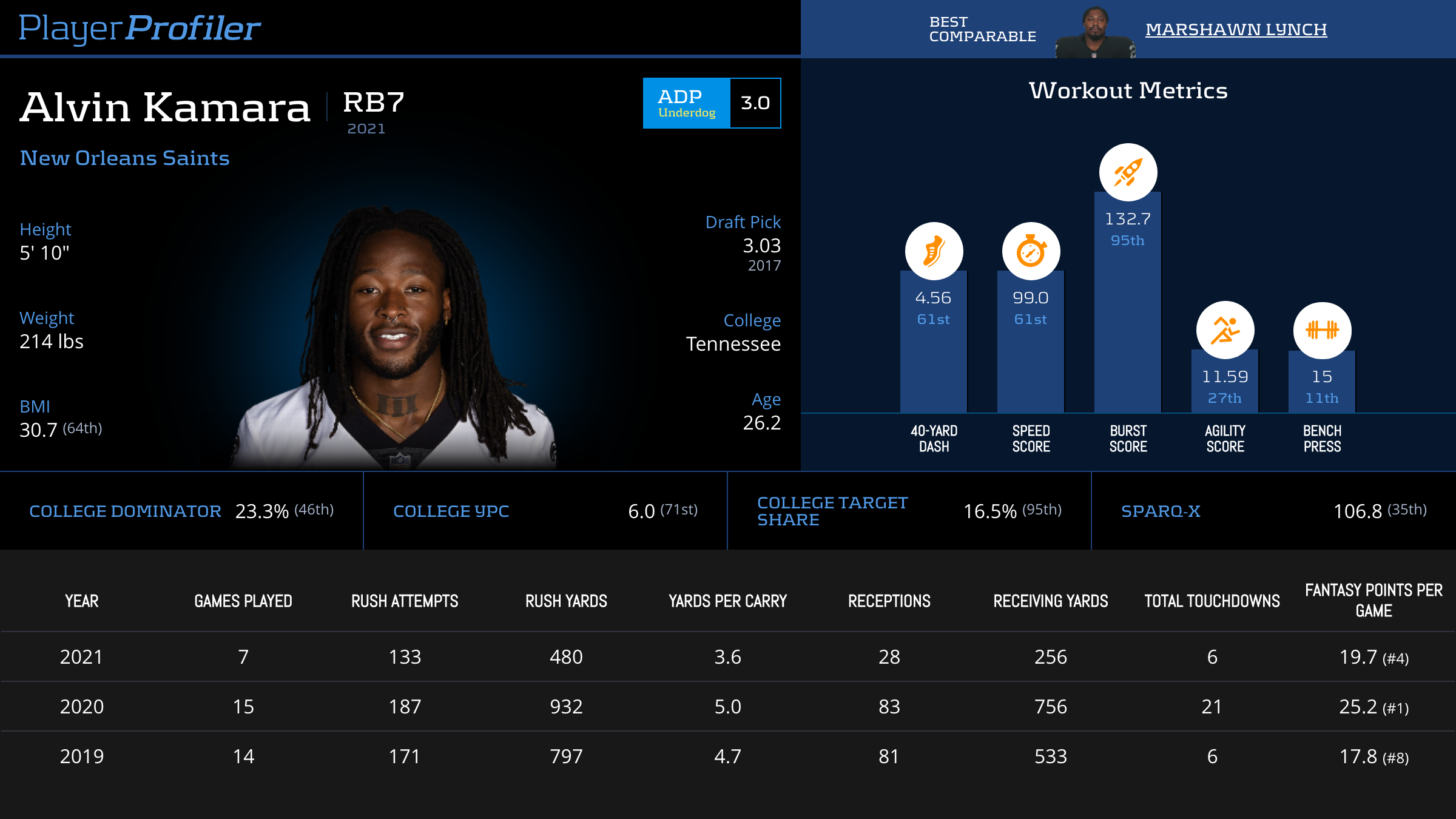 Interestingly, Kamara still ranks inside the top 10 in Carries Inside 10 (13 carries), even after missing four weeks with a knee injury. It’s Kamara time.

The run-back option to target from the Chargers/Giants game is Saquon Barkley. With Mike Glennon named the starter, it’s time to temper expectations (more than usual) for the Giants passing corps. The situation sets up well for Barkley though as the Chargers have really struggled to stop the run. Barkley’s 61.9 Red Zone Opportunity Share (No. 1 on the slate) pairs nicely with a Charger’s team allowing a 50-percent Rushing TD Percentage (No. 4). Expect a lot of dump-offs/garbage time for Barkley and hope for a touchdown.

Projecting as the RB1 (by median and upside projections), Austin Ekeler should be a fixture for gamers making multiple lineups. With a healthy 26.25 implied team total and Keenan Allen out for the game, the production will have to come from somewhere. Ekeler’s already elite 72.37 (No. 8) Opportunity Share and 15-percent (No. 5) Target Share will see an uptick. With salary savers at other positions, spending up for Ekeler is a wise decision.

Stefon Diggs makes for an excellent tournament play in Week 14. After posting a snowflake (9.1 DKPt in a windy, blustering, defensive scrum in Buffalo), Diggs should get right in a more positive game environment in sunny Tampa though. Boasting the slate’s highest game total of 52.5, points should be plentiful on both sides of the ball. Not factoring in last week’s outlier, Diggs has been productive, rattling off three straight WR1 performances while finding pay-dirt in each contest. 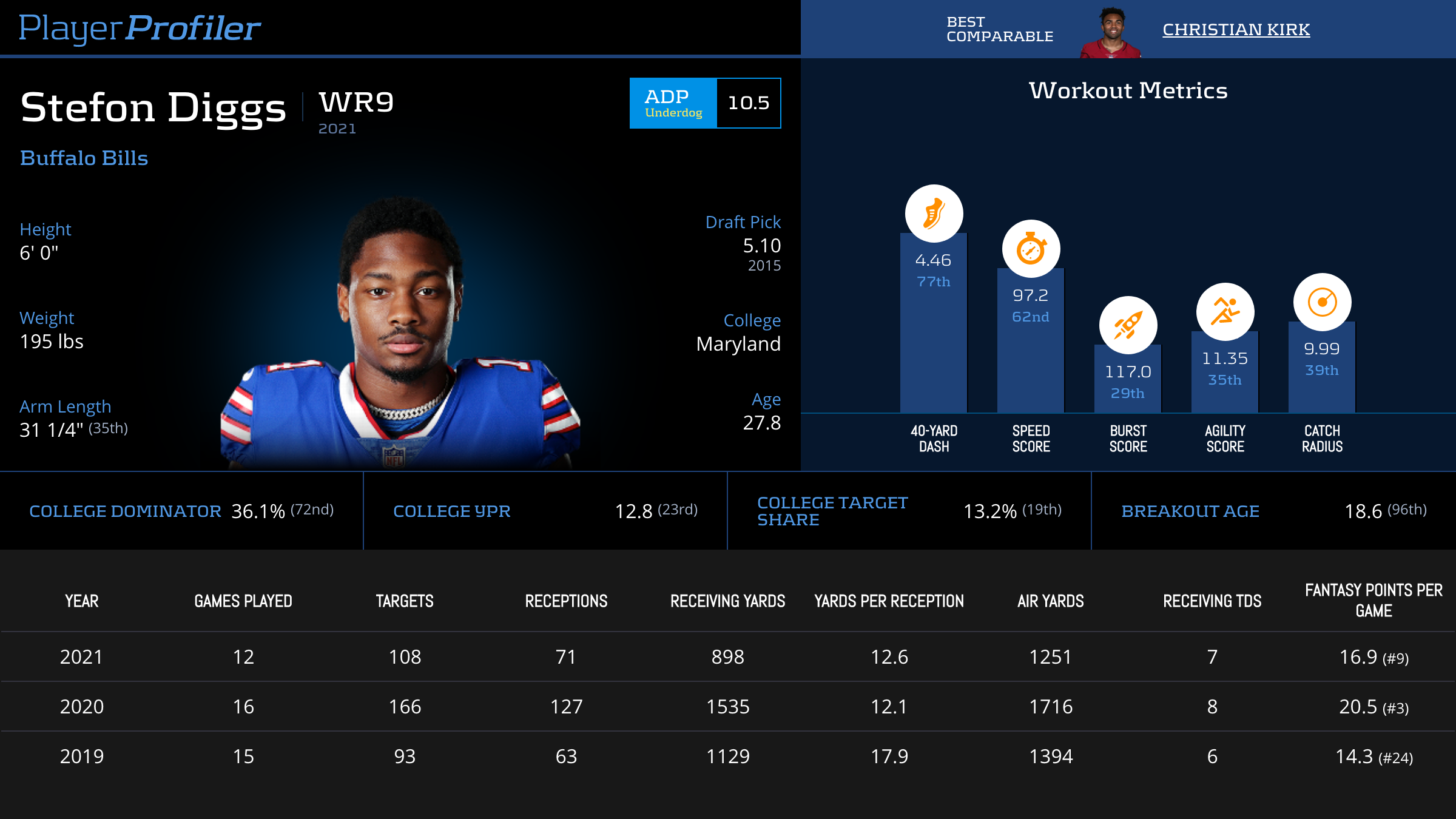 The Bucs secondary has been woeful allowing a league worst 71-percent Passing Percentage. Regardless if by selling out to stop the run or by the Bucs own prolific offense, this defense has become the premier pass funnel. Obviously pair Diggs with Josh Allen and run it back with Leonard Fournette. The Bills have allowed the No. 4 most fantasy points to opposing backs over the past four weeks and Fournette has been fire.

After dusting up the Raiders with a double-TD performance a few weeks back, Tyreek Hill looks ready for round two. The Upside Finder is feeling Hill in this matchup (slate leader with a 31.26 upside projection) and for good reason. After beginning the season stingy against opposing receivers, the Raiders Cover defense has been exposed allowing the No. 7 most fantasy points to opposing receivers (in part due to Hill’s performance in Week 10). Hill’s 10.58 Targets Per Game is No. 3 behind only Diontae Johnson and Cooper Kupp. Include Travis Kelce in your stack with Patrick Mahomes and Hill for a Chiefs onslaught. With Darren Waller ruled out, Hunter Renfrow becomes the ideal run-back option.

With Tee Higgins posting back to back WR1 performances, let’s not forget about Ja’Marr Chase. While the ownership projections are relatively similar (Higgins at 15-percent and Chase at 11-percent), game-log scrollers will notice Chase hasn’t eclipsed 13 DKPt since Week 7. I’ll take my chances on the lower owned of the two as their peripherals are nearly identical (both with 38-percent Air Yard Share and both around 25-percent Target Share). In a must-win game for the Bengals, expect them to get Chase involved down the field where the 49ers allow the No. 8 most explosive plays down the field (20-plus yards).

With David Njoku out Sunday (COVID-19/Reserve), free agency bust, Austin Hooper gets a shot at redemption. Hooper has been disappointing overall but could make it on volume alone this week in a nice matchup with the Ravens. Both Njoku and Hooper have played about 60-percent of Snaps and account for roughly 13-percent Target Share. With Njoku ruled out, expect Hooper’s snaps and Target Share to get a tick up. At $3,400, it won’t take much for Hooper to pay off given his expected increased role. 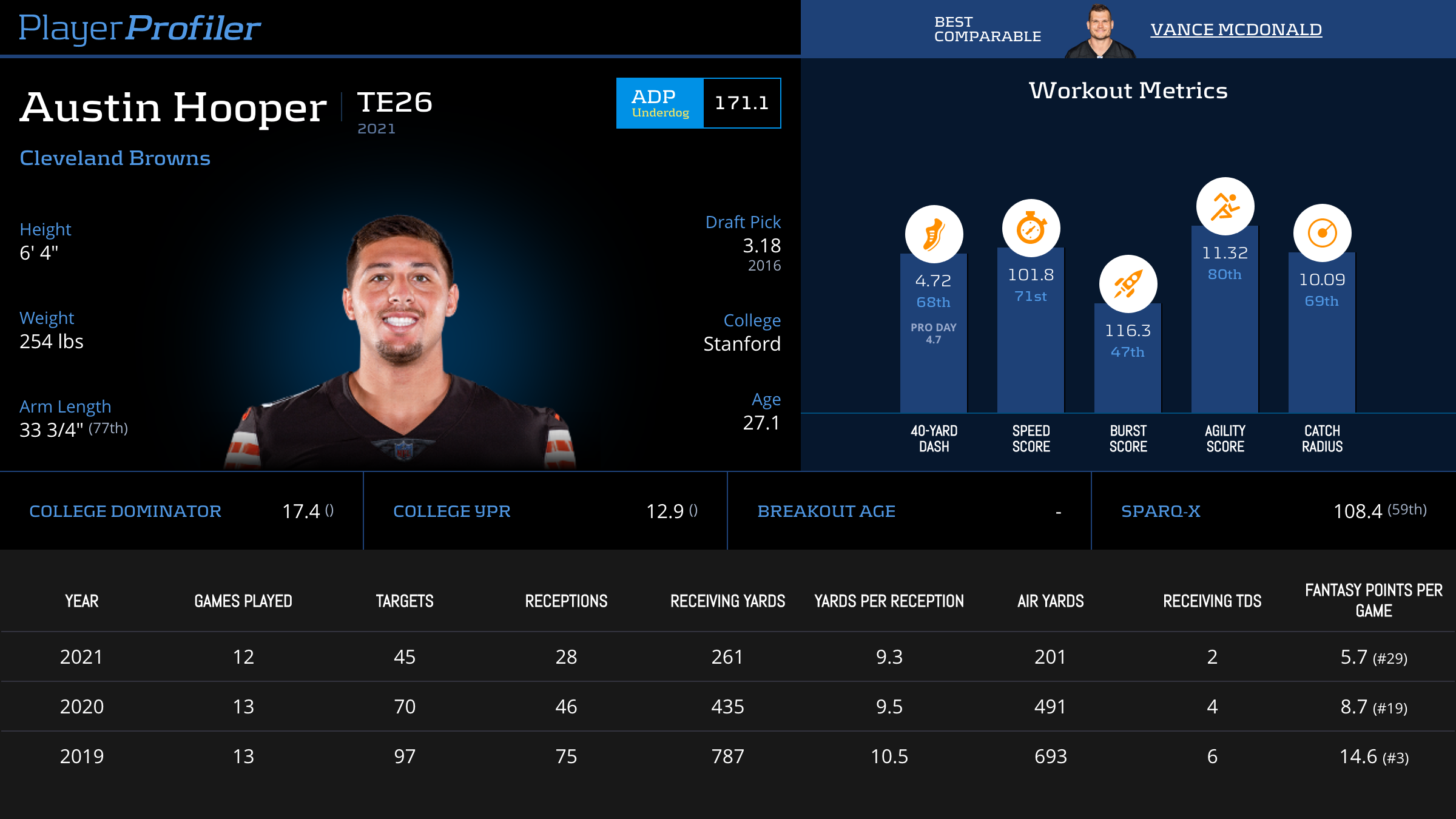 To continue the Chiefs onslaught, consider Travis Kelce. While no tight end projects to be over 14-percent owned (James O’Shaughnessy woof!), you can pretty much pick whoever you want without worrying about ownership. With George Kittle and Rob Gronkowski also on the slate, the lean is to roster Kelce based on similar volume but higher Vegas totals and better matchup. Only the Eagles allow more fantasy points to opposing tight ends than the Raiders. Differentiate your rosters elsewhere by rostering value players or possibly flexing a second tight end like Foster Moreau from the same game.