A week removed from a top three QB finish (30.8 DKPt), Jalen Hurts projects as the QB2. While the trio of rushing touchdowns against New Orleans was a bit of a fluke, Hurts’ QB1 upside is not.

3 rushing TDs on the day! #FlyEaglesFly

After a stretch of sub-par outings, Hurts showed up in a big way posting his best game since Week 4. The Eagles rushing attack is locked in and it looks for real. He now leads the league in Rushing Touchdowns (8) and his 10.45 Carries Per Game is second only to Lamar Jackson. While the Giants have been good, not great against rival quarterbacks (ranking No. 21 in aFPA) they have been leaky on the ground. The Giant’s ranking near the bottom of the league in Rush Success Rate (51.94-percent) plays into the Eagles strength (No. 2 in Rush Yards and No. 3 in Rush Success Rate). Expect a lot of plays to be run on both sides of the ball as this game leads the slate in Pace of Play. Pair Hurts with DeVonta Smith or Dallas Goedert or run him solo but whatever you do, don’t fade him.

Tom Brady deserves a mention any time the Bucs have a slate-high team total (28). Brady has been electric, leading all qualified quarterbacks in Attempts Per Game (42.3) and Passing Touchdowns (29). With Antonio Brown being ruled out, the concentration of Targets is distributed to the usual suspects: Mike Evans, Chris Godwin and Rob Gronkowski. Although they stymied the Bills last week, the Colts rank No. 2 in aFPA to quarterbacks. Brady and Hurts are popping in the Upside Finder as well as the slate’s top quarterbacks.

After a couple down games, Joe Burrow looks to right the proverbial ship in Week 12. Starting the season hot by tossing multiple Touchdown Passes in eight straight, regression caught up to Burrow in a big way. But after back to back games without a passing touchdown, the hope is that the pendulum will swing the opposite direction. The matchup is fine as the Steelers rank No. 19 in Pass DVOA. The game’s fair total (45) sets up nicely for a low-owned game stack situation with concentrated target shares on either side of the ball.

If the public is fading Jonathan Taylor for fear of point-chasing, it’s time to buy. Taylor ranks No. 3 in Upside Projection (via the Upside Finder) yet outside the top ten in projected ownership (4.1-percent projected ownership). While his steep price ($9,100) is prohibitive, it makes for a pay-up to be a contrarian situation. By paying up for Taylor, for example, your lineup construction is instantly different from the competition. The Bucs rank No. 2 in Rush DVOA but will be put to the test by fantasy football’s RB1.  Play Taylor. You’re welcome.

With the Falcons visiting the Jaguars in a pace up spot (No. 3 Pace of Play), cherry picking fantasy commodities from either side seems to be the way to go instead of out-right stacking. While both Cordarelle Patterson and James Robinson are both intriguing, the edge goes to the latter. Robinson’s 71.64-percent Opportunity Share bests more notable bell cows such as Saquon Barkley and Christian McCaffrey. He’s scored in back-to-back games and now faces the Falcon’s defense that is allowing 28.3 DKPt/game to opposing rushers and ranks No. 24 in Rush DVOA.

Another surprisingly overlooked bell-cow running back in Week 12 can be found in Austin Ekeler. After hanging up four total touchdowns (two rushing/two receiving) on an island game in Week 11, Ekeler projects to be rostered outside the top ten at the position (4-percent projected ownership). With Justin Herbert and Keenan Allen expected to be the big chalk spend-ups for the Chargers, rostering Ekeler is a nice leverage play on such Charger’s stacks. The spot isn’t all that bad either as the Broncos rank No. 32 against the rush.

With Cam Newton injected back into the Panther’s offense, Robby Anderson is back in the conversation. Anderson was banned for much of the season due to the un-inspired quarterback play of Sam Darnold. However, it’s time to unban Anderson for Week 11 in a nice matchup with the Miami Dolphins. 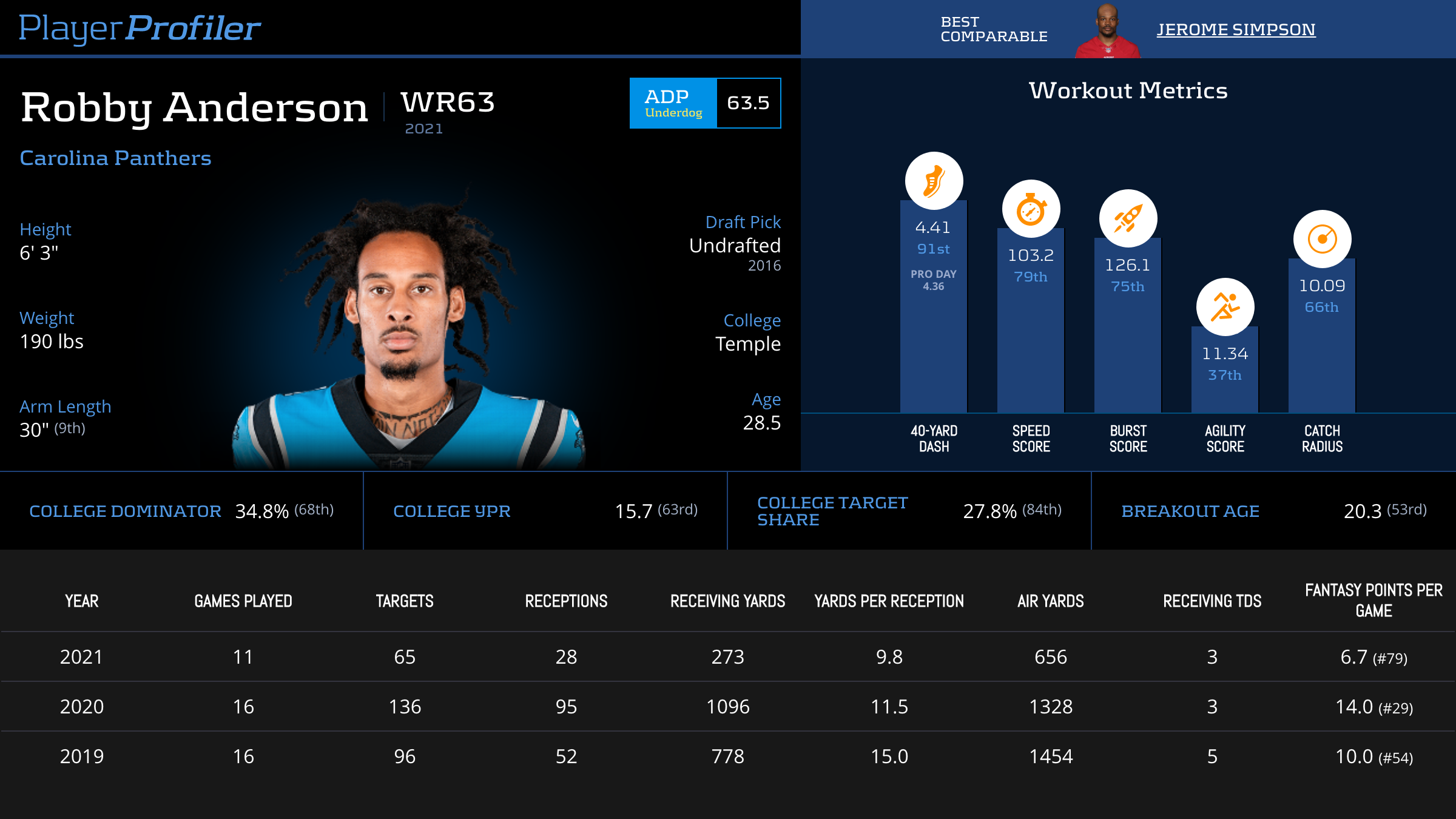 Anderson and Darnold never could get on the same page and that resulted in Anderson being top ten in Uncatchable Targets (No. 8). Since Newton replaced Darnold at quarterback, however, Anderson has logged back to back games of four plus Receptions (he hadn’t caught that many passes since Week 5 previously). With Newton, Anderson has nearly matched D.J. Moore with a 20-percent Target Share and Receptions (9). The Dolphins can be had over the top too, as they rank dead last in explosive plays (20 plus yards downfield). At only $4,700 and projecting to be hardly owned, there are worse spots to find this kind of upside.

It’s unlikely to fit all these pricey commodities in one lineup, but the idea is to overweight the field in your 150 build rather than in just one lineup. Having said that, Cooper Kupp is in serious consideration given his status as the overall WR1. His 11.6 Targets Per Game and 31.9-percent Target Share is deserving of more than his low 4.3-projected ownership to say the least. Run him with Matthew Stafford or as a high-cost one-off.

With Joe Flacco and Mike White on the COVID-19/reserve list, mistake-prone rookie Zach Wilson retakes his role as the starting quarterback for the Jets. Though his season has been mostly marred with injury and poor play, the downgrade to Wilson is (hopefully) overstated in reference to his impact on Elijah Moore‘s recent breakout.  Moore has strung together some nice fantasy games as of late bookended by a 27.4 DKPt in Week 9 and 32.6 DKPt performance last week. Since Week 9, he ranks No. 1 in Receiving Touchdowns (4), tied for No. 6 in Targets (25) and No. 4 in Receiving Yards (269). The (valid) worry from fantasy gamers is that the move to Wilson will be that much worse for Moore. However, at Moore’s .7-projected ownership, it’s worth wondering if the quarterback change warrants such drastically low ownership. I think not.

A cheap way to get access to the Bucs lofty team total is by paying down at tight end with Rob Gronkowski. After missing several weeks with a rib injury, Gronkowski slid back into his normal role seeing 8 Brady Targets. Gronkowski is the cheapest commodity on the Bucs offense and rostering him allows you the benefit of paying up at other positions. The Colts rank No. 4 against the run while allowing a league high Passing Touchdown Percentage. Lastly, the Colts allow the No. 2 aFPA to enemy tight ends.

every TE (outside of maybe Kelce), so if he can have a 17% tgt share in Week 11 and run routes downfield, that's icing on the cake

Gronk is my TE4 rest of season behind Kelce/Waller/Andrews

Yet FantasyPros has him TE13 ROS 😬

Go and trade for him if your league mate uses pic.twitter.com/pMw6YfAWxL

To stay on theme, paying down for Evan Engram ($3,800) looks to be a nice way of getting a discount piece of the game ranked No. 1 in Pace of Play. The Giants finally pulled the plug on Jason Garrett after some hard-to-watch offensive blunders. Expect the team to game plan ways to get Engram involved as they are likely to be without top options Kadarius Toney (quad) and Sterling Shepard (quad). Kenny Golladay should draw a lot of attention from top corner Darius Slay, so my interest lies with Engram. The Eagles rank last in aFPA to opposing tight ends.