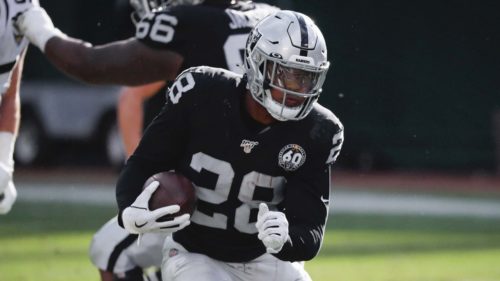 The first week of fantasy sports is always the most difficult. New coaches, rookie roles to be determined, defensive upgrades, and no training camps in 2020 to gain insight on roster construction or usage. The strategy this week is to target high scoring games while using advanced stats, and metrics to support the props. Tampa at New Orleans, and sneaky shootout Las Vegas at Carolina, lead the way this week.

Last season, the Carolina Panthers gave up a league-worst 27 rushing touchdowns, nine more than any other team. Josh Jacobs led the Raiders with seven touchdowns while finishing No. 11 among qualified running backs with 44 Red Zone Touches.

While Jacobs and the Raiders look to exploit Carolina’s poor run defense, Christian McCaffrey looks to continue dominating defenses at home. McCaffrey led the NFL with 19 total touchdowns in 2019, scoring multiple touchdowns in four of eight home games. To win a Touchdown Dance on MKF, you must have a multi-touchdown output from at least one player. In 2019, Jacobs, McCaffrey, and James White combined for 10 games with two-plus touchdowns, with two coming in Week 1. White enters the season against an inexperienced Dolphins defense that finished No. 30 against the run while allowing the most touchdowns in the NFL..

No. 2) Philadelphia at Washington: Go Long

Terry McLaurin vs Darius Slay: quietly the matchup to watch in Week 1 out wide. With both players exhibiting mid-90th-percentile Speed Scores, Slay has the ability to shut down any receiver, while McLaurin has the wheels to take the top off any defense. Monkey Knife Fight doesn’t have to be hard when speed, targets, and opportunity rule. In 2019, McLaurin finished with two games with over 100 yards, both against Philadelphia, including in Week 1. 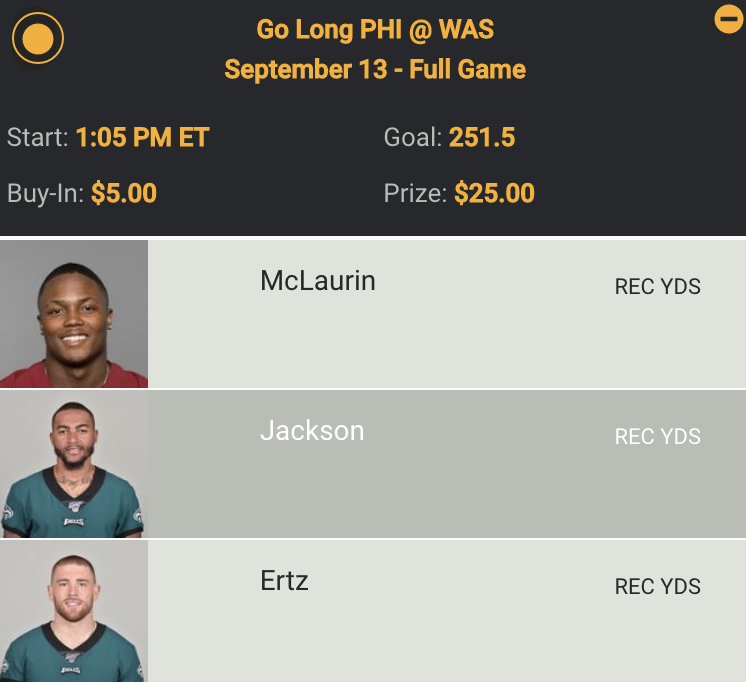 The Eagles offense was decimated by injuries in fall camp, as they lost three of their seven receivers on the active roster. With injuries to Alshon Jeffery and Jalen Reagor, Zach Ertz will be faced with playing target hog once again on Sunday after finishing his fourth straight season as the team’s leading receiver.

DeSean Jackson, Week 1. Do I even need to explain? In seven seasons with the Eagles, Jackson has four 100-plus yard performances in Week 1, including two against Washington. The past two seasons, Jackson opened up in astronomical fashion with games of 5-146-2, and 8-154-2.

The juiciest matchup on the slate. The best tight end in the NFL, George Kittle, against the No. 32 ranked defense in TE yards and touchdowns allowed. With Deebo Samuel and Brandon Aiyuk injured, the 49ers will lean on Kittle and a strong run game to slow down the Cardinals offense. 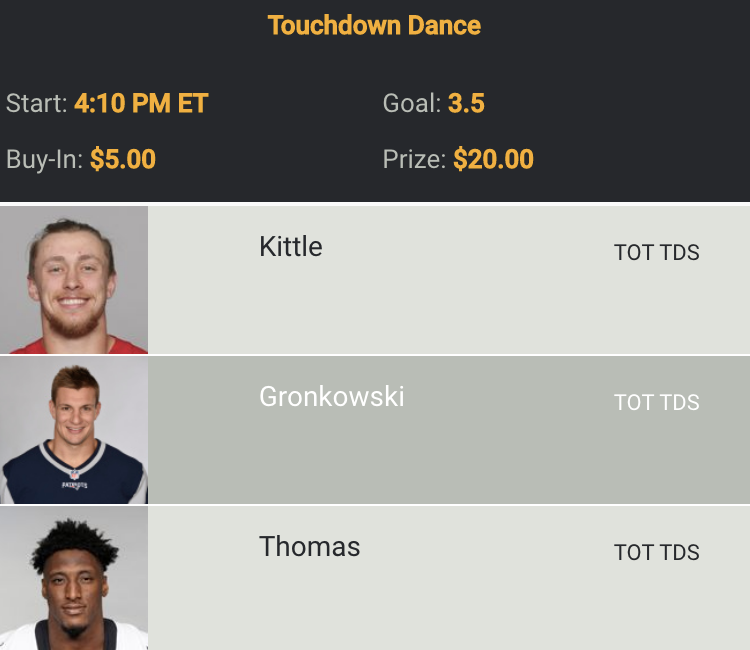 With 11 touchdowns in 2020, Tom Brady and Rob Gronkowski have the opportunity to surpass the great Chargers duo of Philip Rivers and Antonio Gates as the most prolific QB/TE duo of all-time. While Gronk is healthy, expect Brady to target his favorite weapon early and often in this high scoring affair.

In two games last season, Michael Thomas totaled almost 300 yards and three touchdowns against Tampa Bay. Expect nothing less from the best receiver in football on Sunday as New Orleans plays the league’s No. 1 rush defense.

Matt Ryan failed to surpass 300 yards twice in 2019 at home. In both instances, Matt Schaub relieved Ryan in the fourth quarter. Two of the most prolific passers in the NFL duel in Atlanta Sunday. Both Ryan and Russell Wilson will cross the 300-yard benchmark. Seattle’s No. 27 ranked pass defense brought in five new starters in 2020, signing Quinton Dunbar from Washington who had a 61.8-percent (No. 37) Catch Rate Allowed in 2019.

Averaging 275.3 yards per game, more than anyone through 10 seasons, Matthew Stafford looks to continue his historic pace against a young Bears defense starting rookie Jaylon Johnson. With injuries in the backfield, Detroit will need to lean on an explosive passing game to get ahead of Chicago early.

In 2019, Jacksonville finished bottom five against the run while Indianapolis finished No. 7 in rushing offense. After acquiring 38-year-old Philip Rivers and rookie phenom Jonathan Taylor, the Colts look to continue running the ball at a record pace in 2020. Expect them to run early and often Sunday in Rivers’ team debut.

Las Vegas at Carolina, the sneaky shoot-out of the week, has a projected total of 47.5. Carolina finished 2019 the No. 32 ranked run defense, while Las Vegas finished as the No. 25 ranked pass defense. Carolina lost the No. 2 tackling safety in Eric Reid, and top cornerback James Bradberry, to free agency, resulting in three rookies projected to start in the defensive backfield. It’s wheels up for Derek Carr and Teddy Bridgewater.

Carson Wentz has battled injury all camp, along with losing three receivers. Miles Sanders will be limited in Week 1. Wentz looks to Zach Ertz, and DeSean Jackson often in an attempt to slow the Washington front seven that finished 2019 top-3 in pressures. In seven games against Washington, Wentz has only failed to reach 266 yards once, during his rookie season.

Kirk Cousins is 1-2-1 against Green Bay as Minnesota’s starting QB, averaging 232 yards per game at home and 327 yards per game at Lambeau. In Week 2 of 2019, Dalvin Cook totaled 191 yards on 23 touches in Green Bay. After a slow 2018, Cook looks to be the featured piece on a Vikings offense that lost Stefon Diggs to Buffalo over the summer. Look for Minnesota to attack the No. 26 ranked run defense early and often Sunday. In Week 1 last year, Cousins finished with just 98 yards in a 28-12 win over Atlanta. While the team finished with 38 carries and 172 yards, a nearly 80-percent run rate.

Baltimore looks to continue its record-setting performance from 2019, which saw them outrush the next closest team by 51.3 yards per game. After both teams finished Top-5 in pass defense last year, both added more talent in free agency. While Cleveland upgraded their defensive backfield, they lost tackling leaders Mack Wilson to injury, and Joe Schobert to free agency. The Browns run defense finished No. 31 against quarterbacks and No. 27 overall against the run. This bodes well for a run-first quarterback in Lamar Jackson. Look for him to stay under 200 passing yards in this one.

The Podfathers Prop of The Week – Green Bay at Minnesota: Rapid Fire

The Podfather’s Monkey Knife Fight Prop of The Week comes from the Black and Blue Division. Since 2016, one game between Minnesota and Green Bay has surpassed 41 total points in regulation. For the third consecutive season, the Vikings open the season at home. In a 2019 opening win over Atlanta, they passed for 92 total yards. Minnesota has averaged 35 rushing attempts over the past two season openers. 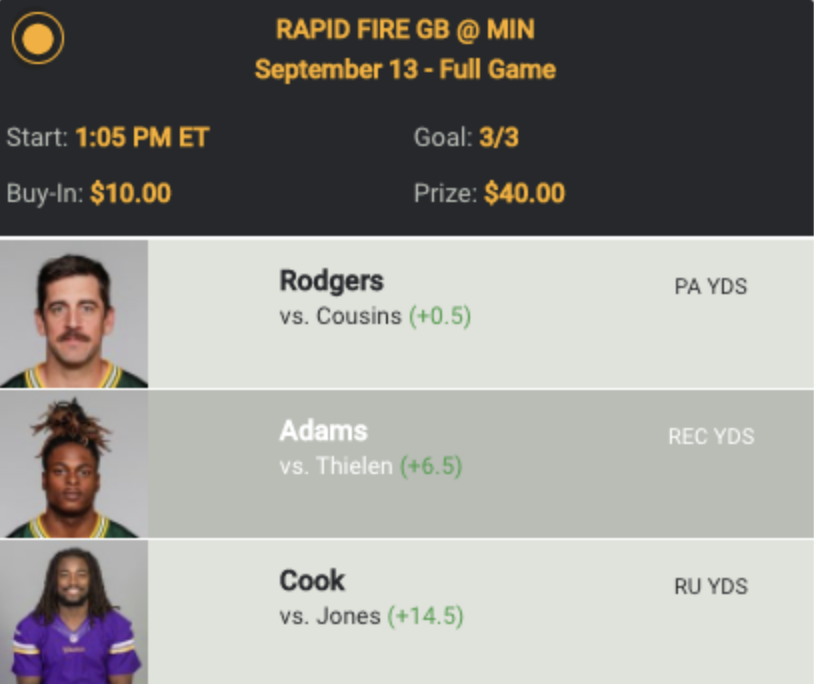 Dalvin Cook enters a 14.5-yard favorite over Aaron Jones. Still, it’s worth noting that Jones, often considered Green Bay’s No. 2 receiver, along with the addition of rookie bulldozer A.J. Dillon, only helps Cook’s case in Week 1.

Follow along each week as I walk you through the top props of the week from Monkey Knife Fight. Use the Promo Code: UNDERWORLD when you join to receive a 100-percent Instant Match Bonus up to $50.