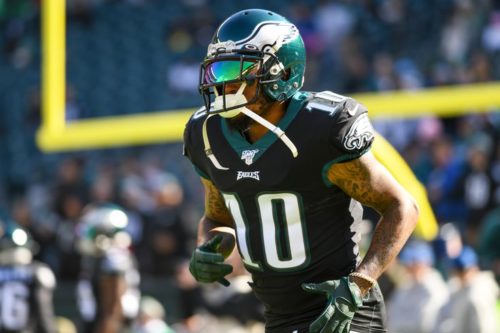 Maximizing your fantasy points per salary dollar is the key to cashing in DFS. If you want to afford the best cash plays on the slate, dumpster diving for underpriced value plays is the way to go. While player salaries have been a bit more aggressive on both DraftKings and FanDuel to start 2020, we can still identify players that project for solid roles relative to their price tag. Here are some of the best DFS flex values for Week 1 based on PlayerProfiler’s advanced stats, metrics, and analytics.

DeSean Jackson smashed in this same Week 1 matchup last season, hauling in eight balls for 154 yards and two scores. Even in his advanced age, Jackson still has some of the juice from the 4.35 (98th-percentile among qualified wide receivers) 40-yard dash he ran as a younger man. This week he’s set up arguably better than he was a year ago.

Both Jalen Reagor and Alshon Jeffery are trending in the wrong direction with their respective shoulder injuries. The rookie first-rounder has been going through all drills with a shoulder harness, but he is just two weeks removed from a labral tear. Jeffrey has even less luck with his shoulder injury, having not practiced in any capacity. Even if both suited up, Jackson is set to be the dynamic element to this passing attack while the tight ends dominate the intermediate range. Rostering Jackson offers a massive ceiling and a solid floor as well.

Outside of Terry McLaurin, Washington has no proven talent. They saw massive turnover at every skill position through free agency, the NFL Draft, and the recent releases of Derrius Guice and Adrian Peterson. Washington is desperate for another playmaker in the passing game, which paves the way for Antonio Gibson to flash his dynamic ability.

Gibson was a hybrid weapon at Memphis, showing skills as a runner (11.2 yards per carry), receiver (19.3 yards per reception, eight touchdowns), and returner (28.0 yards per return, one touchdown). At 6-0, 228-pounds with 4.39 wheels, he looks like a David Johnson clone. This level of athlete is an offensive coordinator’s dream; too big for safeties and corners and too fast for linebackers. Washington’s offensive coordinator, Scott Turner, was in Carolina the past two seasons with Ron Rivera. They clearly know how to feed running backs that are dynamic in the passing game.

The best part of Gibson in Week 1 is his price. While DraftKings raised the floor of RBs to $4000, he is still the best value on the board on both sites. We can easily project him for double-digit touches in what should be a solid game environment. These teams scored 59 combined points in Week 1 last year. Gibson won’t get much going on the ground with Philadelphia’s stout front, but he has the speed to break a long play if he gets to the second level.

It’s always best to avoid receivers going up against All-Pro cornerbacks coming off of a Defensive Player of the Year award. That puts DeVante Parker out of the lineup, leaving Preston Williams as the only other proven commodity on the Dolphins. While he was a target magnet through the first eight games of 2019, his midseason ACL tear casts a shadow on his health for Week 1. He has yet to log a full practice. Enter: Mike Gesicki. Not only is he a literal freak, boasting 95th-percentile athletic traits across the board, but he broke out down the stretch in 2019. From Weeks 9-17, he posted four top-five TE weeks, seeing at least six targets in all but one game.

If we dive a little deeper, DFS gamers should be even more excited for Gesicki. He spent 33-percent of his snaps in the slot or out wide. With Allen Hurns and Albert Wilson both opting out, Gesicki has the potential to be a full-time slot weapon for the Dolphins. Imagine a 6-6, 247-pound behemoth with a 118.7 (95th-percentile) Speed Score against an undersized nickel CB. Yes, the Patriots had a legendary defense last season. That is bound to regress given their opt-outs and natural variance. Gesicki is insanely cheap and will have a sizable role with an aggressive QB throwing the ball.

With Deebo Samuel (foot) and Brandon Aiyuk (hamstring) still on the mend, Kendrick Bourne is set to lead the 49ers in snaps at WR. While he is usually reserved for a rotational role, Bourne has produced when given the opportunity. In the three games where he ran at least 20 routes last season, he averaged 14.7 fantasy points.

Totally ready for a three-touchdown performance from Kendrick Bourne. https://t.co/4Pvw6UBlrP

This matchup also has the second-highest game total on the main slate at 48.5. The Cardinals proved to have the firepower to compete against this team last year, scoring 25 and 26 points in their two matchups. After adding DeAndre Hopkins, we should expect a fantasy point explosion from these offensive-minded head coaches. Jimmy Garoppolo will be forced to throw the ball in this matchup, and Bourne will running routes. Sounds like a recipe for success.

Bryan Edwards is the reason we cut through the noise and focus on the metrics that matter. He didn’t post a single 1,000-yard season in college or crush double-digit touchdowns. Still, what he did relative to South Carolina’s offense is truly incredible. Edwards broke out as a true freshman, registering a 17.8 (100th-percentile) Breakout Age. He did that in spite of sharing a field with NFL talents such as Deebo Samuel and Hayden Hurst. When he was finally the alpha, Edwards carried the offense, posting a 48.4 percent (94th-percentile) College Dominator Rating. His counting stats were sabotaged by his putrid QB play, but the Raiders still took a chance on him in the third round of the 2020 NFL Draft.

Now that Tyrell Williams is done with a shoulder injury, Edwards has earned the starting gig as the “X” receiver opposite Henry Ruggs. While Ruggs is clearly a more polished athlete, Edwards looks the part of a true alpha at 6-3, 212 pounds. The Panthers will need to respect Ruggs’ 4.27 (100th-percentile) 40-yard dash time. That will leave Edwards with plenty of 1-on-1 matchups with Corn Elder and Donte Jackson, both of whom stand under 6-0. Both these defenses ranked in the bottom eight of Defense DVOA last season. This game has significant shootout potential, and Edwards is the best way to get cheap exposure to it.