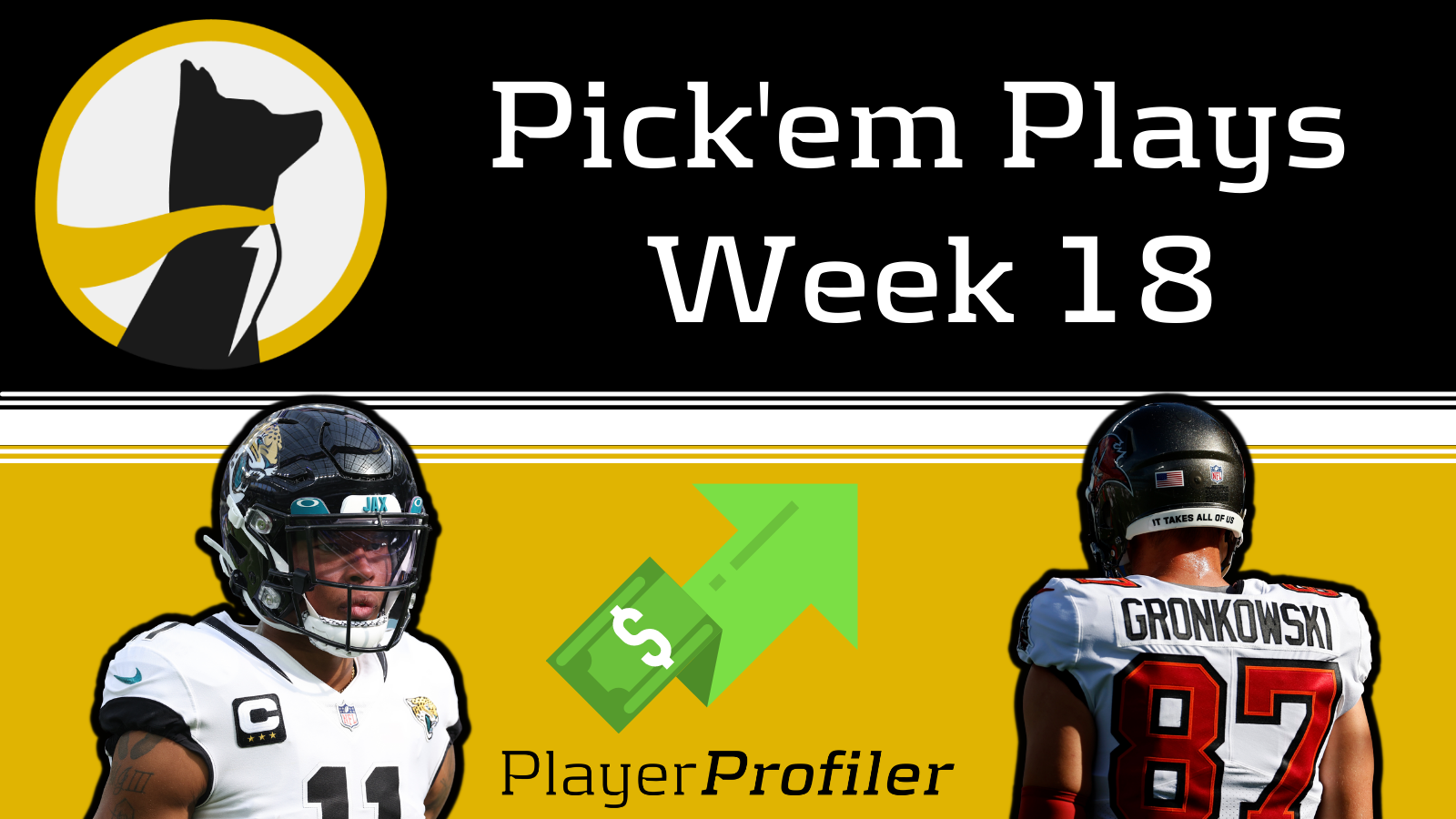 The Jaguars have nothing to lose, but Marvin Jones will lose $500,000 if he doesn’t bring in four receptions against the Colts. As a result, his volume will be safe in Jacksonville’s Week 18 pride match. Jones has reached 43 yards in five of his last seven games, so this modest line has a strong chance to hit the OVER. Also, he won’t have difficulty producing yards against PlayerProfiler’s CB64, Isaiah Rodgers.

It’s Gronk smash time in an important matchup against Carolina. The Buccaneers will lean heavily on Rob Gronkowsi because they are without Antonio Brown and Chris Godwin. Carolina’s defense yields a high percentage of it’s targets allowed to tight ends and Gronk will make the most of this opportunity with his 10.4 (No. 1 among qualified tight ends) Average Target Distance. Most importantly, he needs 85 receiving yards to earn a $500,000 incentive bonus. Cash out with Gronk. 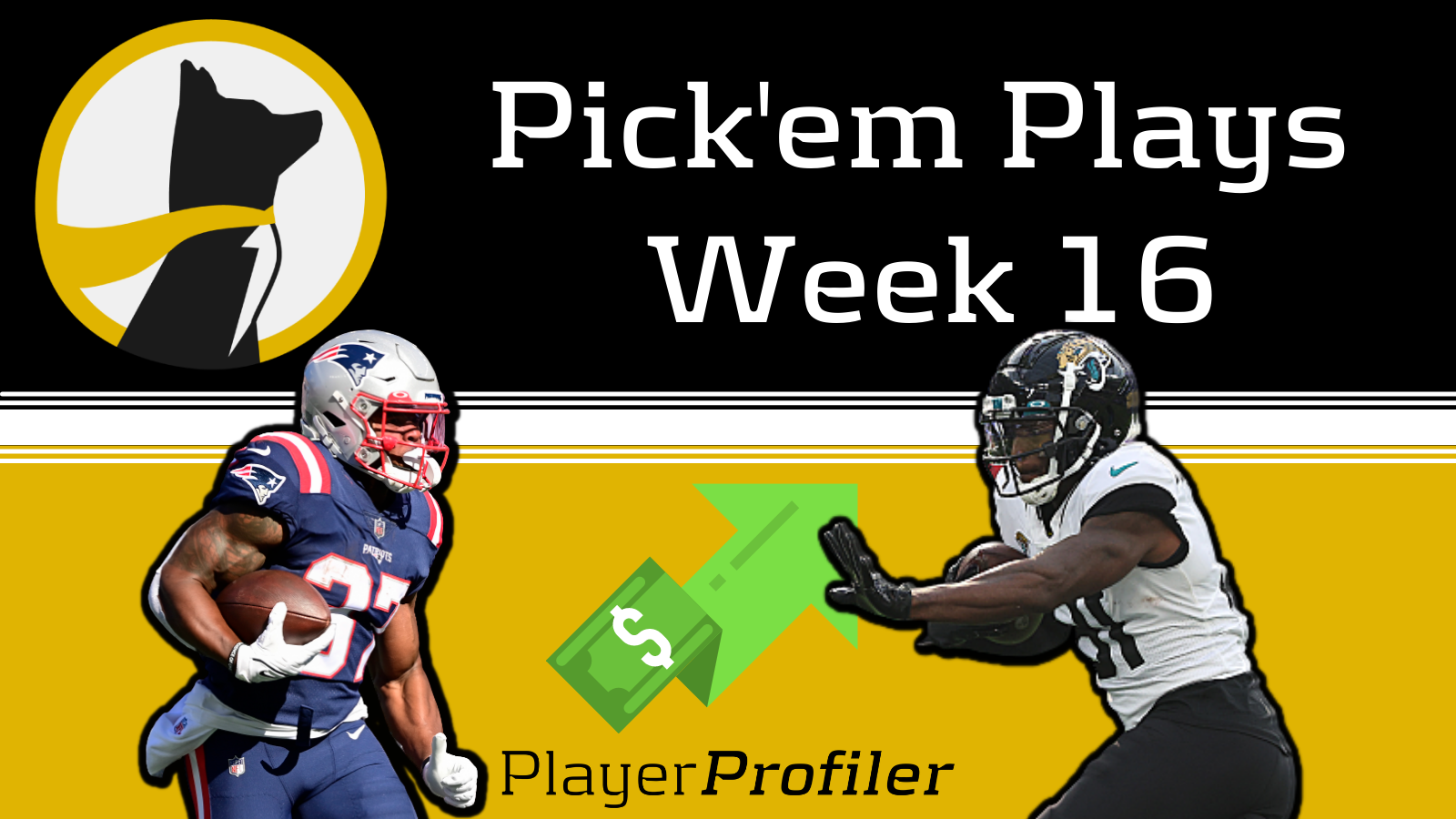 Veteran wide receiver Emmanuel Sanders is set for big opportunity in pivotal division matchup today against the Patriots. The Bills will be without both Cole Beasley and Gabriel Davis, resulting in a target void that Sanders will have to fill on team that runs 38.4 (No. 4) Team Pass Plays Per Game. And the icing on the cake for this line is that Sanders has a 16.2 (No. 3 among qualified wide receivers) Average Target Distance, demonstrating that he will hit this line in the first half with his presumed spike in volume.

The theme of the picks thus far has been COVID-19/injury induced opportunity. Another prime example of this is the Damien Harris rushing line on Underdog Fantasy. The Patriots will be without Rhamondre Stevenson and potentially Brandon Bolden, leaving Harris with the lion’s share of carries against a Buffalo team that has allowed 170 rushing yards per game in the last three games. Harris torched the Bills in Week 13 with 111 yards on 10 carries and while his efficiency will certainly regress, his opportunity will boom on a team with 28.4 (No. 8) Team Run Plays Per Game. 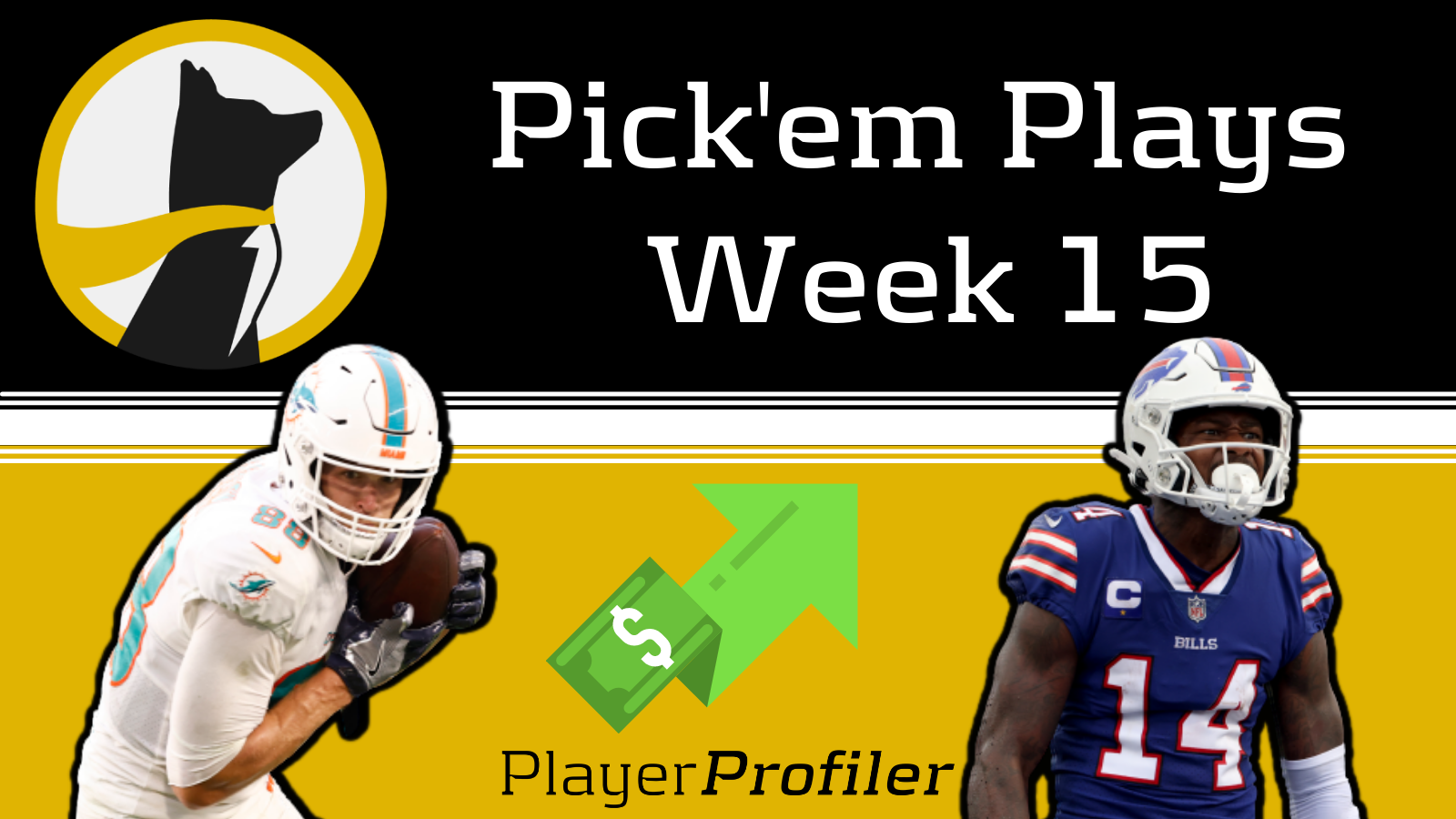 Jaylen Waddle is on the COVID-19 list, priming Mike Gesicki to smash the OVER on his Underdog Fantasy line this weekend. Gesicki already sees 6.8 (No. 3 among qualified tight ends) Targets Per Game and he will surely benefit from Waddle’s vacated 8.9 Targets Per Game. Consequently, Gesicki’s 25.3-percent (No. 5) Air Yards Share has no where to go but up. He has hit 46 receiving yards in eight out of thirteen games this season and he’ll certainly hit the OVER against the Jets on Sunday.

Everyone has the Bills projected to crush the Panthers today and that can make it tempting to take the OVER on this line. However, Stefon Diggs will find it difficult to produce against one of the leagues best cornerbacks, Stephon Gilmore. A quick glance at Gilmore’s player page on PlayerProfiler.com shows that he has allowed only 2 receptions since joining the Panthers in Week 10. Diggs has hit the OVER on this line in four out of 13 games this season. Now is the time to hit the UNDER. 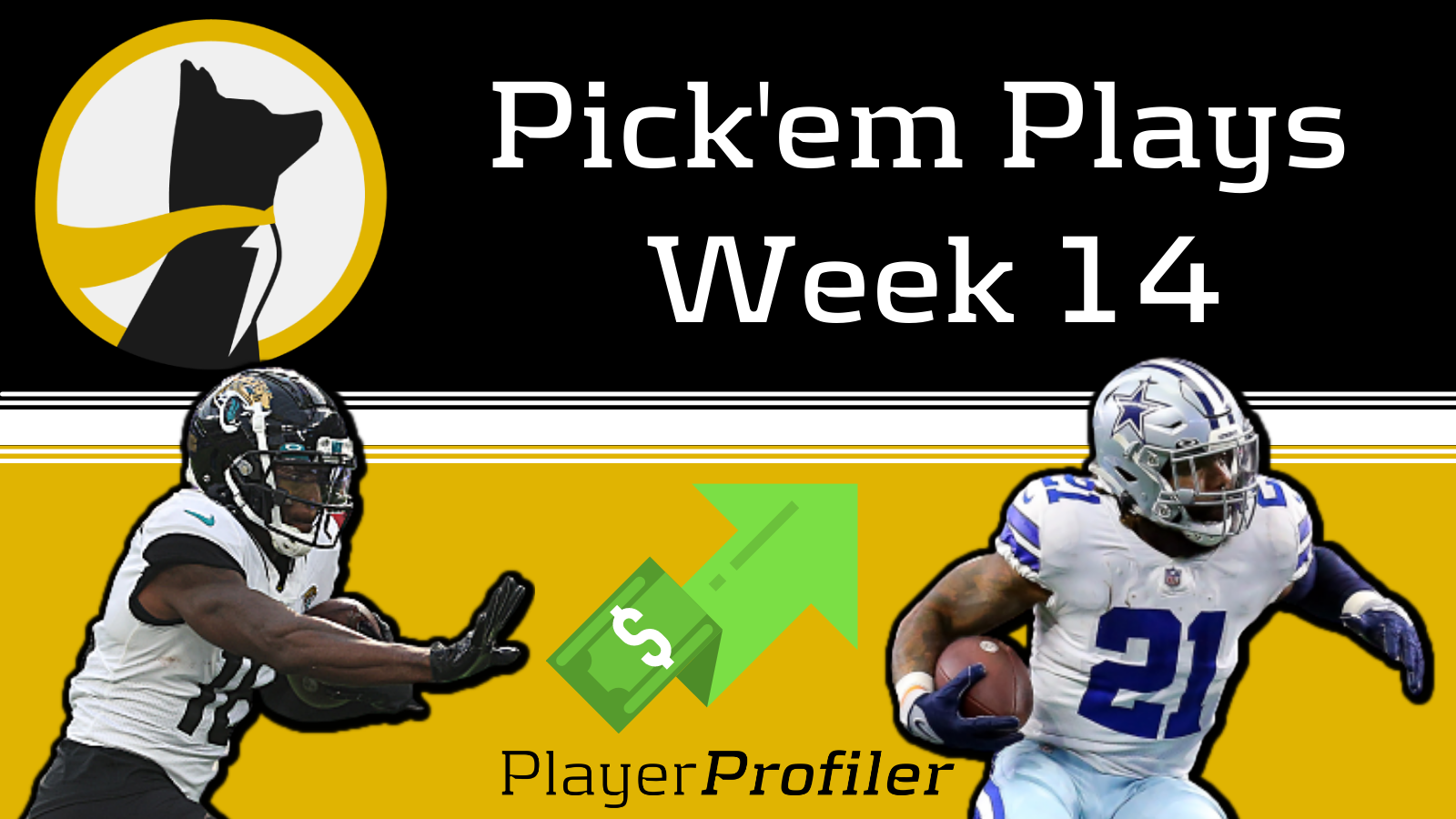 Don’t look now, but Laquon Treadwell is the No. 1 wide receiver in Jacksonville. Jamal Agnew was sent to the Injured Reserve two weeks ago and since then, Treadwell has seen significant opportunity: 91.5-percent and 92.7-percent Snap Shares, 40 and 27 Routes, 8 and 5 Targets. Also, he has hit the OVER in each of these games and he’ll do so again when he matches up against PlayerProfiler.com’s No. 107-ranked cornerback, Chris Jackson.

I’m not sure why the Ezekiel Elliott line hasn’t adjusted, considering that Tony Pollard tore his left plantar facia last week. This line is low hanging fruit based on volume alone. While Washington is effective at defending against the run, they will be hard pressed to stop Ezekiel Elliott from going OVER 53.5 rushing yards in a divisional matchup with a 48 point game total. 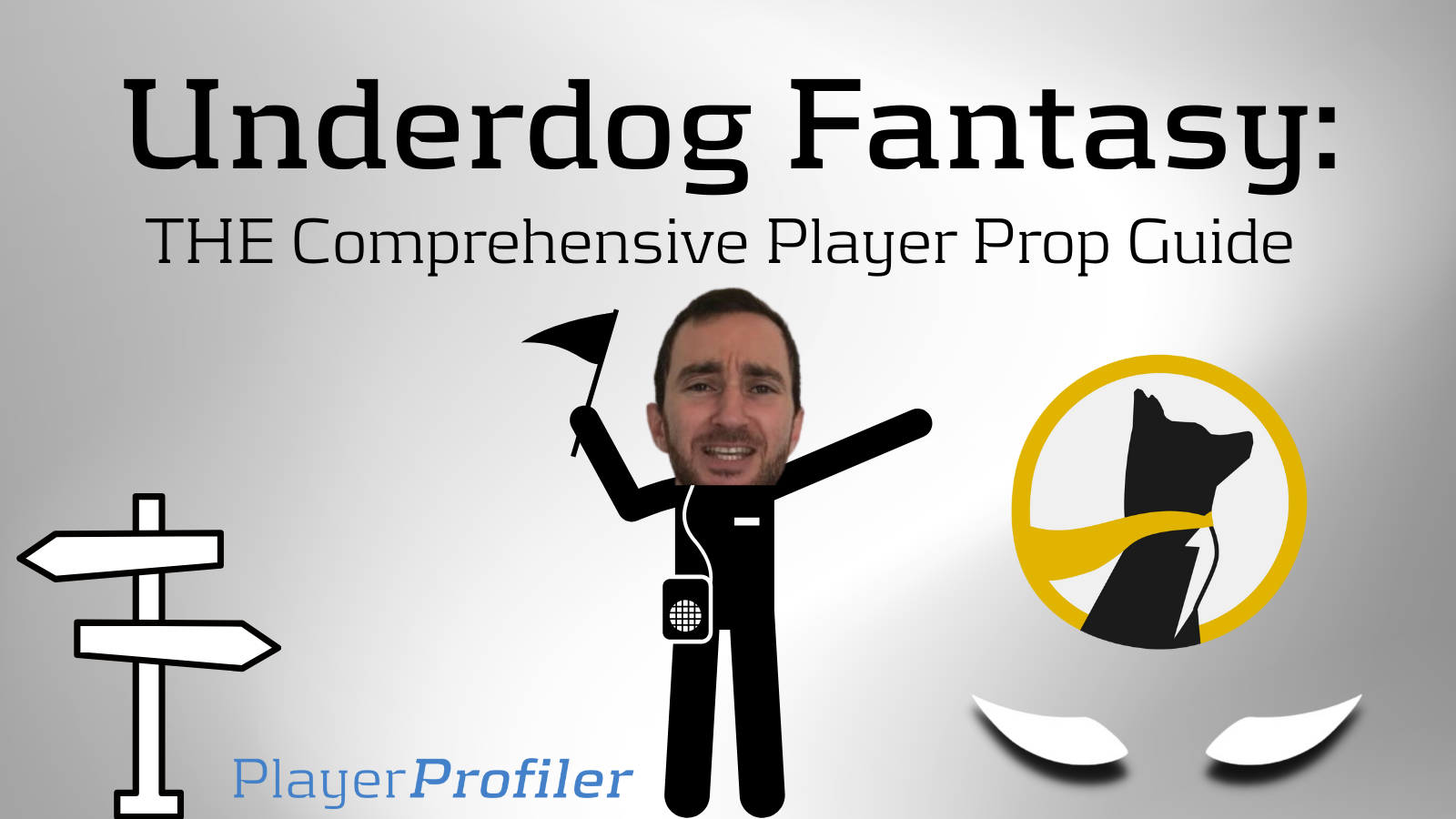 This year, I’ve made hundreds of player prop picks week-after-week on Underdog Fantasy, netting thousands in profit. While anyone can make $1,000 by putting $50 on a Pick-5, it’s much more difficult to be sustainably profitable long-term.

I created this guide to help you do just that. It chronicles my revenge tour, time spent intensely researching player performance and the unique payout structure of platforms like Underdog Fantasy, where I was determined to find an edge for the 2021 season. 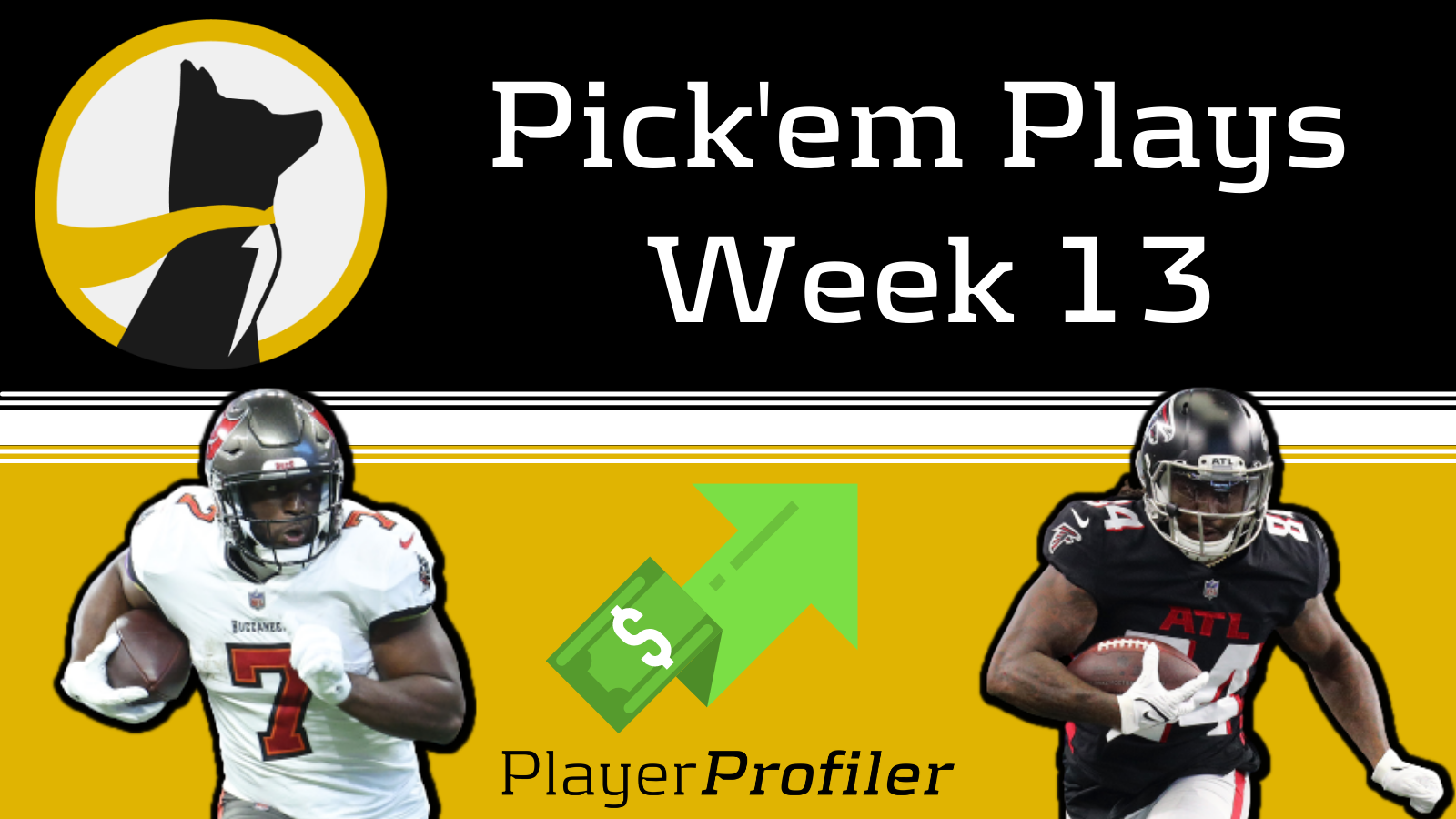 Vegas predicts that the divisional matchup between Tampa Bay and Atlanta will be the highest scoring game of the weekend, with a 50.5-point total. And the beloved Cordarrelle Patterson will be the beneficiary, hitting the OVER with ease. Patterson is one of the most efficient “running backs” in the NFL. His 12.2 (No. 1 among qualified running backs) Yards Per Reception and 6.8 (No. 1) Yards Per Touch will be on full display against Tom Brady and the Buccaneers.

Ja’Marr Chase is coming to smash the OVER in another game with a high total of 49.5 points. Three of the past four games were blowout victories for the Bengals, which have contributed to Chase’s subpar receiving yards. On the contrary, the competitive matchup against the Chargers will provide more opportunity for Chase to rack up yards with his 99.4-percent (No. 2) Route Participation and 41.6-percent (No. 4) Air Yards Share. 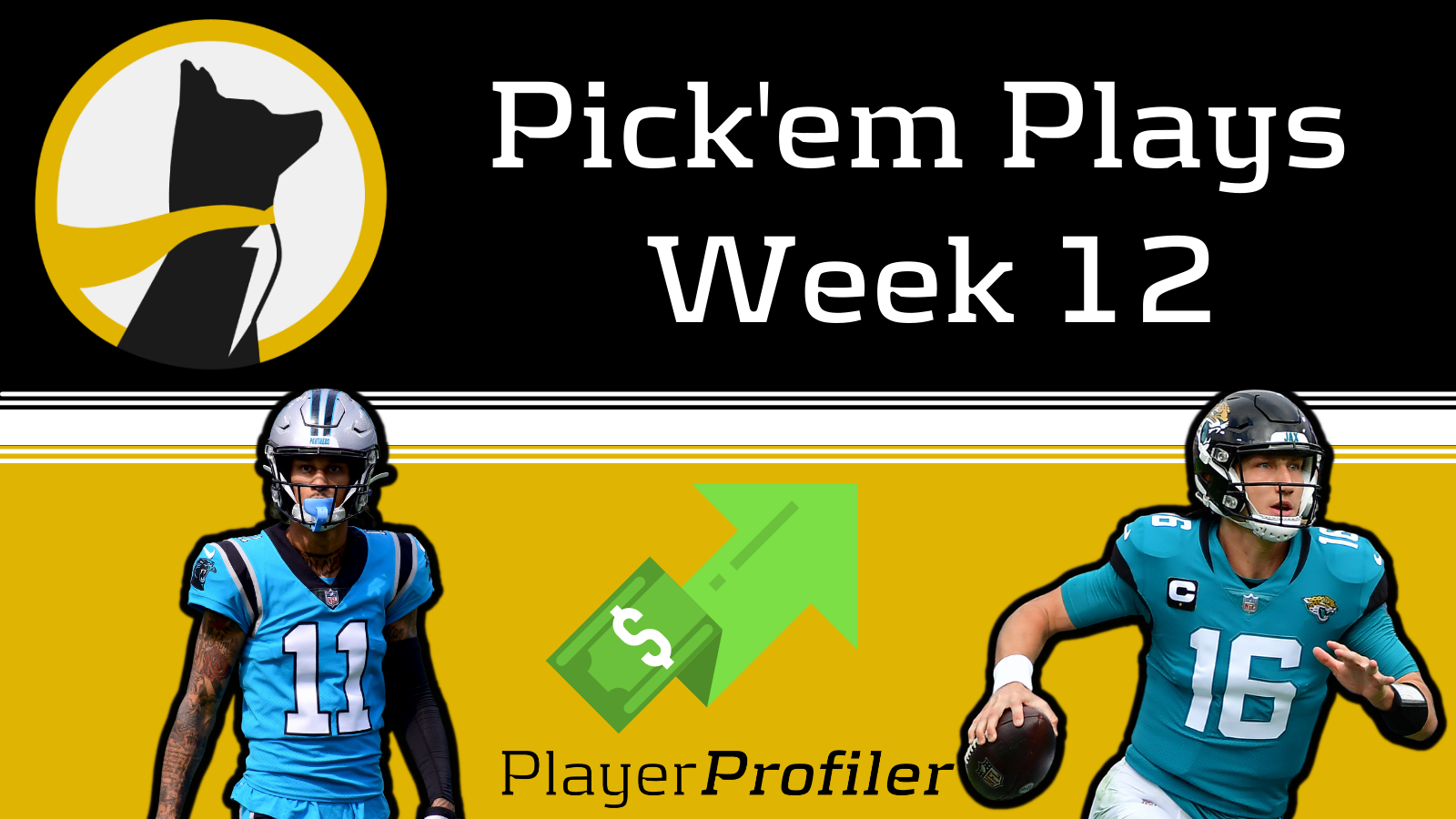 Cam Newton and Robby Anderson are BACK. Anderson has averaged 6 targets and 4.5 receptions on a 20-percent Target Share in his last two games without Sam Darnold. Also, the matchup is prime for Anderson because Miami ranks last in receiving yards and receptions allowed. The probability of Anderson hitting the OVER is strong when considering his current trajectory in the Carolina offense in conjunction with the leaky Miami defense.

Take the OVER on Trevor Lawrence in a bounce back game against Atlanta. Lawrence hit the UNDER on this line in his past three games against Buffalo, Indianapolis and San Francisco, but Atlanta’s defense is one of the friendliest to opposing quarterbacks, ranking dead last in quarterback pressures and No. 30 in opponent completion percentage. As a result, Lawrence will not be hamstrung by his dreadful 29.4-percent (No. 34 among qualified quarterbacks) Pressured Completion Percentage. 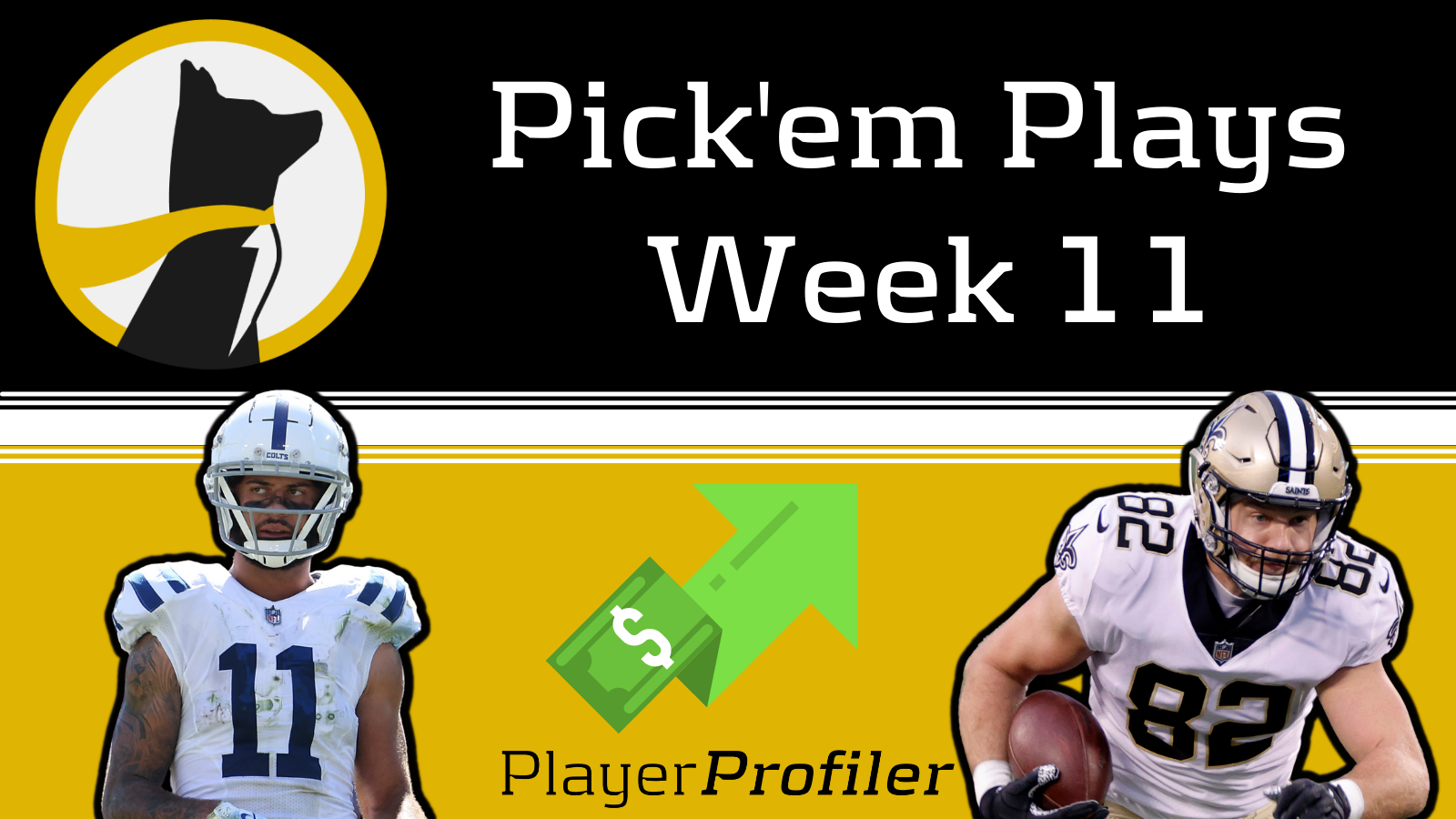 The modest 26.5 receiving yards line for Adam Trautman is bound to hit the OVER. Trautman’s usage has surged since Trevor Siemian took over in Week  8, resulting in at least 6 targets per game. Moreover, his 3 (No. 3 among qualified tight ends) drops show that he is catching the majority of these targets. Additionally, he has hit the OVER on 26.5 receiving yards in two out of three games since Week 8. Last but not least, Philadelphia ranks bottom-5 in yards allowed to tight ends.

While Michael Pittman has hit the over on this line 60-percent of the time, he hasn’t been successful when matched up against top-12 cornerbacks, per PlayerProfiler Cornerback Rankings. The only time Pittman hit the OVER against a top-12 CB was in Week 1 against Jalen Ramsey. This week, Pittman will be pitted against one the best cornerbacks in Tre’Davious White. White has yet to allow more than 52 yards to receivers through Week 10.

A bounce back week is on tap for the Bills when they face off against a “division rival” in the Jets and Emmanuel Sanders will continue to be heavily involved in this get right right matchup. He has made the most of the opportunity with 17.5 (No. 1 among qualified WRs) Average Target Distance and 17.1 (No. 6) Yards Per Reception. Most importantly, he has hit 52 receiving yards in six out of eight games this season. 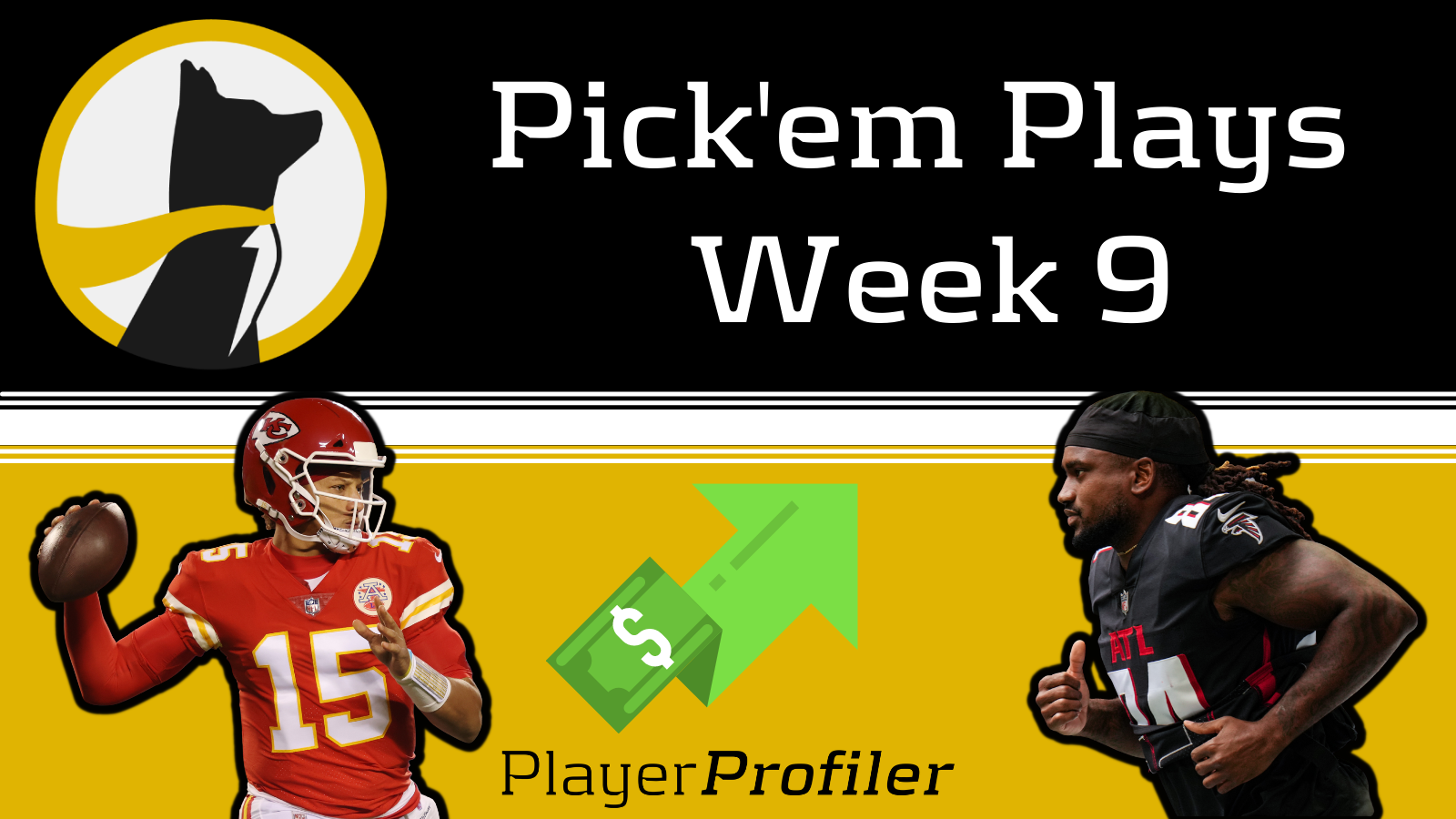 Put some respect on Patrick Mahomes and take the OVER on his passing yards line this week. My confidence in this take is driven by the sheer passing volume that the Chiefs have displayed this season. Mahomes ranks top-3 in many passing opportunity metrics. This game has a decent points total of 48, so Mahomes will continue to air it out to stay competitive because their defense has no chance of slowing down anything.

I love this Zack Moss line because the Bills are 13.5 point favorites against the feeble Jaguars, so game script will naturally lend to running back volume for Buffalo. In fact, Buffalo has a +8.65 (No. 1) Game Script score, so leading early and often is certainly in the cards this weekend. Additionally, Buffalo runs the ball at a high-rate, with 28.7 (No. 9) Team Run Plays Per Game. All things considered, Moss will receive ample opportunity to compile rushing and receiving yards in a cake matchup.