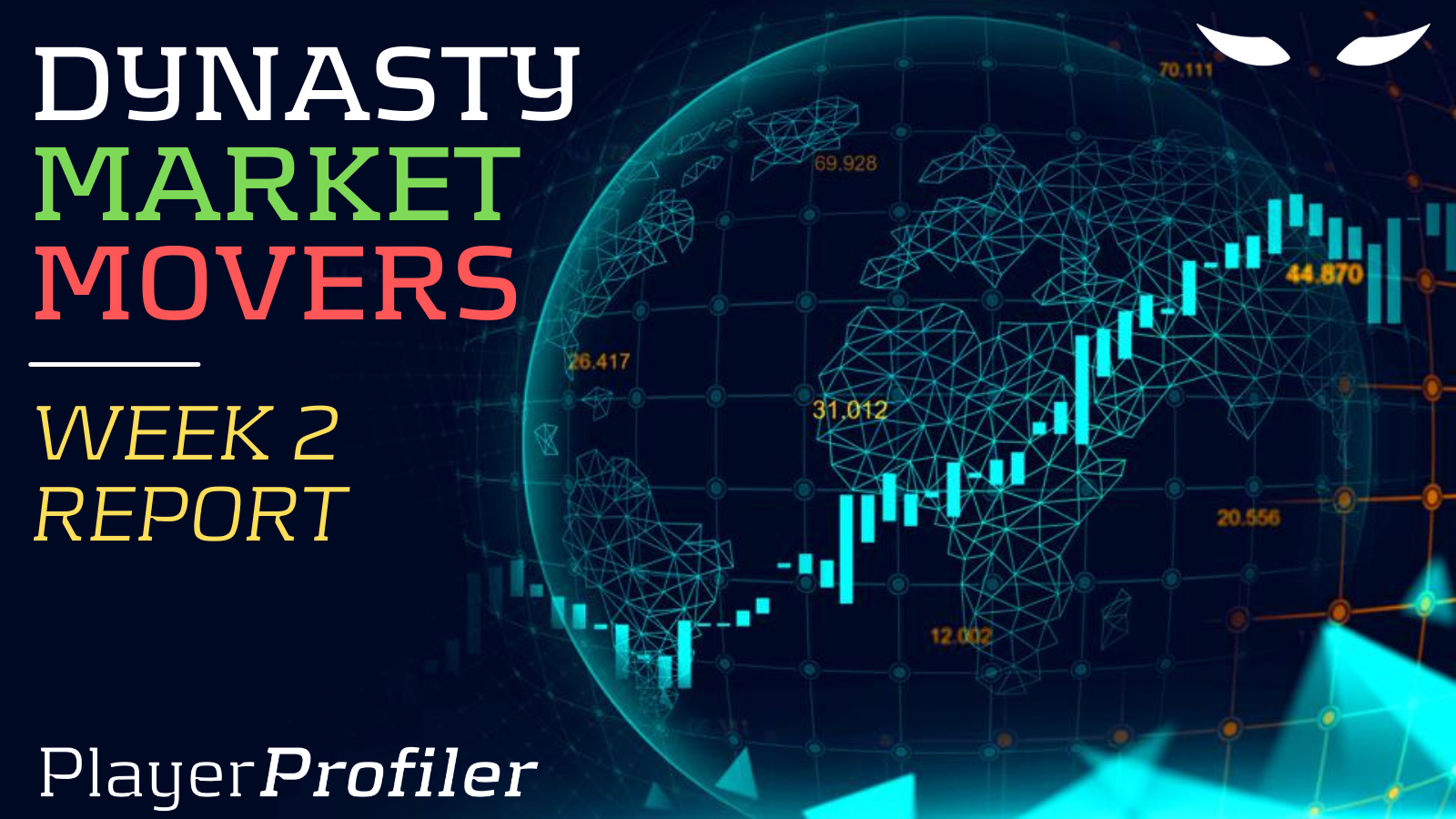 Debuting last week for the 2021 season, the Dynasty Market Movers Report monitors the NFL’s weekly action and uses PlayerProfiler’s advanced stats and metrics to highlight players moving on the dynasty rankings. After a slate that brought a rash of quarterback injuries, here are the Week 2 movers.

Not surprising, Lamar Jackson continues to get it done on the ground. On the year, he is averaging 96.5 rushing yards and 14 carries. Thus far, the Ravens have only had a slight uptick in passing volume, but Jackson has an improved 8.5 yards per attempt. His 7.7 Accuracy Rating is also better than the 7.1 mark from 2020.

Jackson makes big strides on PlayerProfiler’s always up-to-date dynasty rankings this week. He earns 29.07 Lifetime Value points (the most of any QB) to jump from QB8 to QB4. A juicy match-up versus the 0-2 Lions should bode well for his fantasy value.

Tony Pollard is good at football. Subscribers to the RotoUnderworld Enterprise throughout the offseason already know this. Pollard is seeing about a third of snaps, but when he’s out there, he’s involved and productive. Despite less playing time, Pollard has out-targeted Ezekiel Elliott seven to four, and has out-rushed him by 19 yards on 11 fewer carries.

Courtland Sutton is back! After a quiet Week 1, Sutton exploded in Week 2 versus the Jaguars. He hauled in a career high nine of 12 targets for 159 yards. This performance was good for 24.9 fantasy points and a WR4 weekly finish. Just in case anyone forgot, this should serve as a reminder that Sutton finished as WR27 (13.9 Fantasy Points Per Game) just two seasons ago despite a Broncos rotation of lacklustre QBs.

Will Courtland Sutton finish as a top-15 WR this season?🐴 pic.twitter.com/D2ZAlRJMgK

With Jerry Jeudy sadly out of the line-up for the foreseeable future, Sutton appears poised to make the most of his lead role. After eight quarters, he leads all wide receivers with 313 Air Yards and so far has enjoyed the highest Target Quality Rating (10.45, No. 3) of his NFL career. Sutton gains 11.46 Lifetime Value points to rise into the Top 20 at the position (WR19).

It appears that Rob Gronkowski has turned back the calendar to at least 2017. After a year away from professional football, Gronk looks spry in his second season in the Bucs offense. The 32-year-old has strong usage, playing 82.9-percent of snaps (No. 8) running 40 routes (No. 4) and earning 13 targets (No. 6).

Gronkowski finished as the TE1 in Week 1, then followed it up with a TE3 performance in Week 2. On the season, Gronk has 12 catches for 129 yards (No. 4) and four (No. 1) touchdowns. Don’t expect him to keep this pace up all season, but it no fluke. Given his well-established connection with Tom Brady, Gronk looks like a sure bet to finish the season as a TE1. “Red Zone Robby G” gains 13.54 Lifetime Value points to move up two spots to TE9.

After a strong QB4 finish in Week 1, Jameis Winston came back to earth versus the Carolina Panthers. Without the luxury of a positive Game Script, he completed 11 of 22 passes for 111 yards, took four sacks, and threw two (nearly three) awful picks.

Winston’s metrics are nearly as bad as his Week 2 interceptions. Through two contests he has an Adjusted Yards Per Attempt mark of 5.8 (No. 26) with a 65.8 (No. 30) True Completion Percentage. Jameis has committed four (No. 8) Interceptable Passes and six (No. 9) Danger Plays with a lowly 6.6 (No. 31) Accuracy Rating . With the New England Patriots on tap and Taysom Hill waiting in the wings, Winston drops four spots in the dynasty rankings to QB28.

The 2021 campaign is still new, but Myles Gaskin is off not off to the start that dynasty managers had hoped for. Most of this can be attributed to Miami’s three-headed RB committee and a -10.37 Game Script. Regardless, the end result is still a disappointing 56.6-percent (No. 26) Snap Share.

Malcolm Brown has 10 total carries this season and Salvon Ahmed has nine, but neither has been effective. Gaskin leads the committee with 14 carries for 74 yards through two weeks (True Yards Per Carry rate of 5.1, No. 8). If there’s a silver lining to this dark cloud, it’s been Gaskin’s usage in the passing game (10 targets, No. 8). His dynasty stock takes a hit, losing eight spots to match his jersey number (RB37).

The numbers aren’t good. Two games, six targets, three receptions, 22 receiving yards, and zero touchdowns. This is not what dynasty managers had envisioned when they saw Marquez Callaway making spectacular catches in the preseason.

In all fairness, a dose of the Green Bay Packers’ secondary followed by an appearance from “bad” Jameis Winston can do that to a player. It’s not time to panic, but until the Saints passing attack improves Callaway will be tough to trust in fantasy line-ups. The sophomore UDFA drops from WR48 to WR58 on the most recent dynasty rankings update.

Playing 70.9-percent of snaps, Tyler Conklin is operating as Minnesota’s top tight end. He’s had four targets in each of the first two games, catching six passes for 56 scoreless yards. The usage is there, but the productivity is lacking.

With Irv Smith out of the lineup due to injury, Conklin was anticipated to be a productive cog in the Vikings offense. However, the emergence of Vikings’ third wide receiver, K.J. Osborn (a positive market mover this week), has limited Conklin’s passing game role. Relegated to the fifth receiving option, Conklin’s stock drop two spots to TE26.