Trade deadlines are fast approaching for most dynasty leagues. Managers are either headed for the fantasy playoffs, fighting for a final spot, or have turned their attention to 2021. Whatever the situation is, don’t become out of touch with the market. The Dynasty Market Movers Report is here to provide a big picture view of the risers and fallers on PlayerProfiler’s dynasty rankings.

With Damien Harris recovering from a concussion in Week 10, Rhamondre Stevenson made the most of his opportunity. Playing 56.5-percent of snaps, Stevenson led the backfield with 20 carries. He secured four of five targets and posted 114 total yards and two touchdowns. The end result, a 27.2 fantasy point (Week 10 RB2) performance.

The rookie’s  strong showing earned him a near even split with Harris versus the Falcons on Thursday night. Barring any Beli-tricks, expect Stevenson to see more opportunity moving forward. On the season, he has a 39.4-percent (No. 9 among qualified running backs) Juke Rate and 3.27 (No. 20) Yards Created Per Touch. The former Oklahoma Sooner earns 32.31 Lifetime Value points to vault 17 spots to RB35.

As a complement to Aaron Jones, A.J. Dillon has received a Snap Share of 32.7-percent. Despite this limited role, he has three double digit fantasy totals entering Week 10 – weekly finishes of RB30, RB19 and RB18. It’s fair to say, that Dillon has met his pre-season billing of an RB handcuff with standalone value.

Will Dillon carry his fantasy teams to league championships?🏆 pic.twitter.com/sojXcqUJfT

Last Sunday versus Seattle, football fans got a look at what Dillion can do with increased opportunity. With Jones exiting the game with knee sprain, Dillion posted 128 total yards and two TDs on 21 carries. He went two for two in the passing game and had a whopping 10 red zone carries. The fantasy RB3 in Week 10, earns a position best 32.98 Lifetime Value points to rise nine spots to RB20 in dynasty.

Tune into a Baltimore Ravens game on Sunday and it won’t take long to see that Rashod Bateman is good at football. After all, he is Best Comparable to Stefon Diggsr. Since his Week 6 debut, the first round selection has averaged seven targets per game. He’s posted a WR34 or better outing in three consecutive contests. 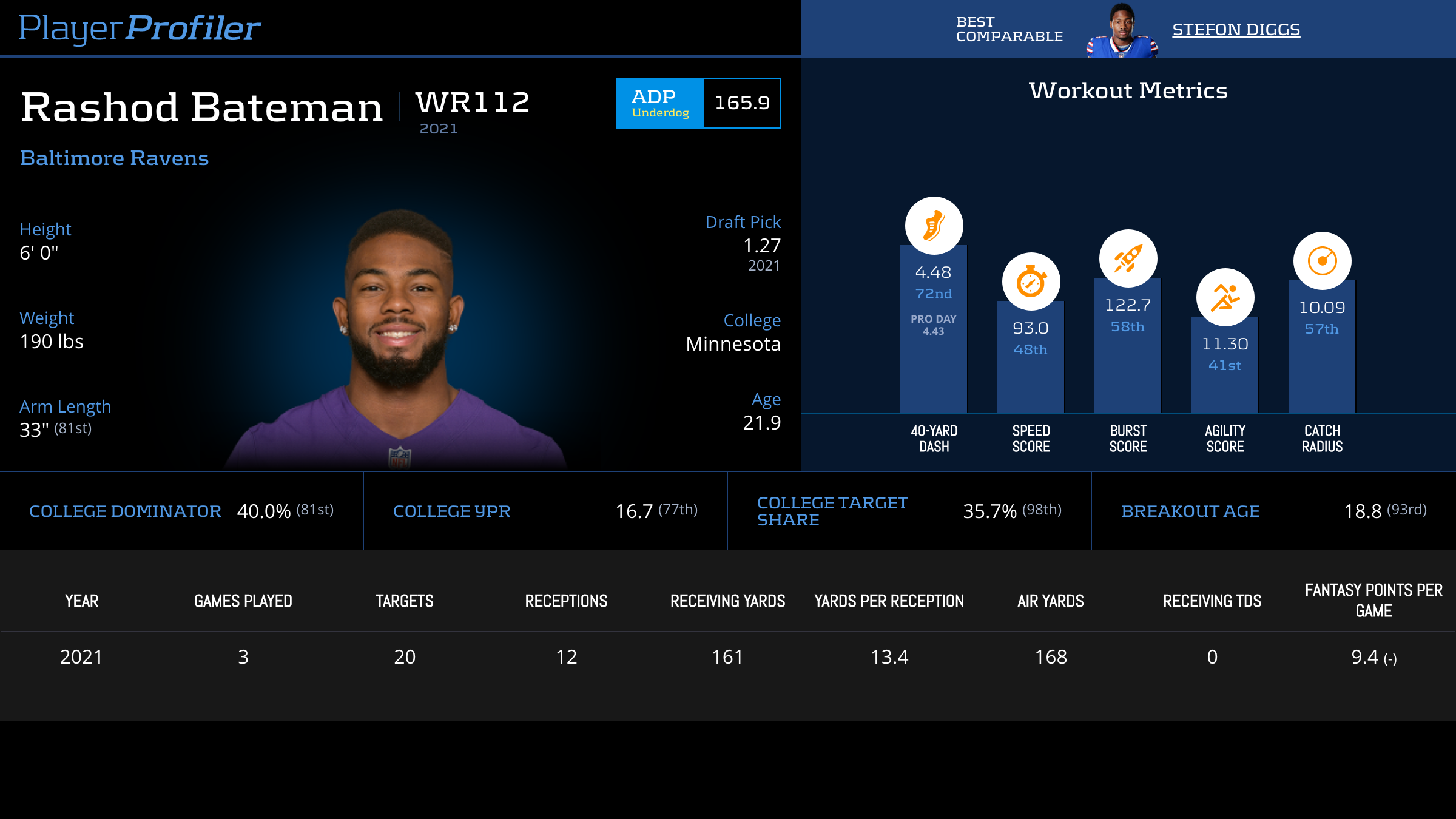 Bateman is seeing a 27.7-percent (No. 17) Target Rate and producing a solid 2.39 (No. 18) Yards Per Route Run. While the sure-handed wideout has yet to post a 100-yard receiving game or score a touchdown, his breakout game is coming. He gains 21.28 Lifetime Value points and seven spots to claim a ranking of WR13 in dynasty.

While Conklin was an inconsistent fantasy option over the first five weeks, he has posted a TE16 or better performance in each of the last four games. He has caught 16 of 22 targets (five in the red zone) during this span. Possessing upper percentile burst and agility, Conklin gains three spots to move to TE15 on PlayerProfiler’s dynasty rankings.

Cordarrelle Patterson‘s ninth year breakout campaign was put on pause in Week 10 due to an ankle injury. On the season, the veteran utility man has rushed for 303 (No. 38) yards and leads all RBs with 473 receiving yards on 39 (No. 3) receptions. Patterson is averaging 17.6 Fantasy Points Per Game  (RB10) in 2021, which practically doubles his next best average. Atlanta’s coaching staff has unlocked him.

This season, Patterson posted an RB20 or better performance from Weeks 2 through 9 with four of those weeks in the Top 12. However, it’s difficult to produce from the trainer’s bench. Patterson loses nine spots to fall to RB44 in the latest update. Championship contenders may want to take advantage of the injury discount – it’s not like his Falcons’ backfield mates impressed in Week 11.

Jarvis Landry has been an underwhelming option for fantasy gamers this year. Limited to six appearances due to a knee injury, Landry has delivered a career low 8.5 (No. 59) Fantasy Points Per Game. This low mark is inflated by a 19.4 point (WR17) performance in Week 1. Despite a 21.4-percent (No. 32) Target Share, Landry has reached 10 fantasy points just once since the Browns’ season opener.

Baker Mayfield has mentioned that the normally consistent slot receive needs to be more involved, so hopefully better days are ahead. However, Mayfield might want to throw the ball more. The 2021 Browns operate at a pedestrian 29.4 (No. 30) Pass Plays Per Game. For now, Landry loses 8.91 Lifetime Value points and nine spots to fall to WR76.

In Week 10 versus the Colts, Marvin Jones caught two of six targets for 35 yards. Despite a stable 89.5-percent (No. 10) Snap Share, this marked the fifth time in the last six games that the veteran WR failed to surpass 35 receiving yards.

With an Average Target Distance of 11.8 (No. 20) and 14 (No. 14) Deep Targets, Jones has been operating downfield for Urban Meyer’s Jags. Unfortunately, a 4.88 (No. 73) Target Quality Rating and 68.8-percent (No. 87) Catchable Target Rate will need to improve for Jones to be a consistent option. The soon to be 32-year-old Jones loses seven spots in the dynasty ranking to fall to WR72.

Dalton Schultz had just two targets in Week 10. This matched his season low in targets from Week 2. In fairness, the Cowboys dominated the Falcons by a margin of 43-3 allowing them to take the air out of the ball.

Michael Gallup‘s return to the line-up could mean less volume for Schultz. In reality, the TE’s production has been trending downward prior to Gallup’s return. After a strong six week span to start the year, Schultz’s last three games include yardage totals of 11, 14 and 54 – he has not scored a TD since Week 4. Schultz’s dynasty stock takes a dip losing two spots to fall to TE18.