Patrick Mahomes looked pretty back to himself while dismantling the Raiders in prime time. After a handful of subpar outings, Mahomes posted his highest scoring fantasy game of the season (39.2 DKPt). Vegas is back in on the Chiefs as denoted by their slate-high 29 point implied team total and I’m here for it. The game ranks No. 1 in Pace of Play and both offenses can fill the stat sheet. Both teams rank top ten in both Sec/Play and Situation Neutral pace (h/t Football Outsiders).

While stacking both sides of the game makes sense, my preference is backing Mahomes and the Chiefs. Despite the Chiefs’ rough start, they still rank first in Passing Yards and Pass Success Rate. The way to attack this Dallas defense is through the air. Teams are choosing to pass the ball against Dallas at a 64-percent clip while completing 3.88 Deep Balls Per Game (pass completions of 20-plus yards). Mahomes is averaging 330.9 (No. 3 among qualified quarterbacks) Air Yards Per Game and 5.5 (No. 1) Deep Ball Attempts Per Game. Get unique elsewhere and roster Mahomes.

Projecting as the No. 7 owned quarterback (3.9-percent), Dak Prescott deserves a mention. With the public understandably more on the Chiefs side, Prescott has gone overlooked. A week removed from a stellar QB1 finish, Prescott gets a Chief’s defense allowing 23.4 DKPt to quarterbacks (No. 2). His 20 Passing Touchdowns and 292 Passing Yards Per Game are good for top five amongst quarterbacks. Pair him up with Amari Cooper in a bounce back spot.

This blurb applies to whichever Browns running back gets the start Sunday. Nick Chubb is day to day after being placed on the COVID-19/reserve list in Week 10. If he’s out for a second straight week, D’Ernest Johnson is back in play at $5,600.

Put another way, 51 of his 52 snaps he either took a carry or ran a route, BETTER usage than Chubb/Hunt 🤯

There’s a lot to like here with this matchup against the Lions. Opposing teams rush the ball a league high 46-percent of the time when facing the Lions. Subsequently, the Lions allow the No. 3 most rushing yards. Combine this with a Browns team who has a 27.5 implied total and rank No. 1 in fantasy points earned by rushers and you have a recipe for success.

At first I thought that the DraftKings algorithm had jumped the gun by pricing Darrel Williams down as if Clyde Edwards-Helaire was returning. It seems, however, like they might just hate him. I kid. It’s possible though his price was made before his breakout performance (32.4 DKPt) on Sunday Night Football. For whatever reason for his mis-price, I’m buying.  At 19-percent projected ownership, the public is rightfully all over this one too. For all the reasons laid out prior in my support for Mahomes: apply them to Williams (massive total and pace up play). PFF grades Williams’ matchup with the Cowboys as No. 2 with a 78-percent OL/DL matchup advantage too. Double stack Williams with Mahomes and one of Tyreek Hill or Travis Kelce for maximum returns.

*Be mindful of Edwards-Helaire’s status as they play at 4:25 EST.*

With Tee Higgins projecting as the highest owned receiver on the slate, a pivot running back worth considering is one Joe Mixon, who has been volatile this season. He has five games under 12 DKPt and four over 24 DKPt. This volatility should be embraced in tournaments where we want low-owned players with an extreme range of outcomes. There’s more to like too. Mixon has a 71-percent (No. 7) Opportunity Share and faces a Raiders team ranked No. 5 in aFPA to opposing rushers.

Some chalkier options to also consider at running back include James Conner and A.J. Dillon. Both backs are popping in the Cash Game Optimizer after being elevated into workhorse roles in recent weeks. Conner and Dillon are especially intriguing after accounting for six total touchdowns in the Weeks 9 and 10.

Hunter Renfrow makes for a high upside value play given his consistency and offensive role. Logging nearly identical stats in back to back weeks (17.9 and 17.6 DKPt), he now gets a Bengals team that ranks No. 7 in aFPA to receivers. Although he’s yet to put together a 100 yard receiving yard performance, his 3x floor is teetering on tournament viability. 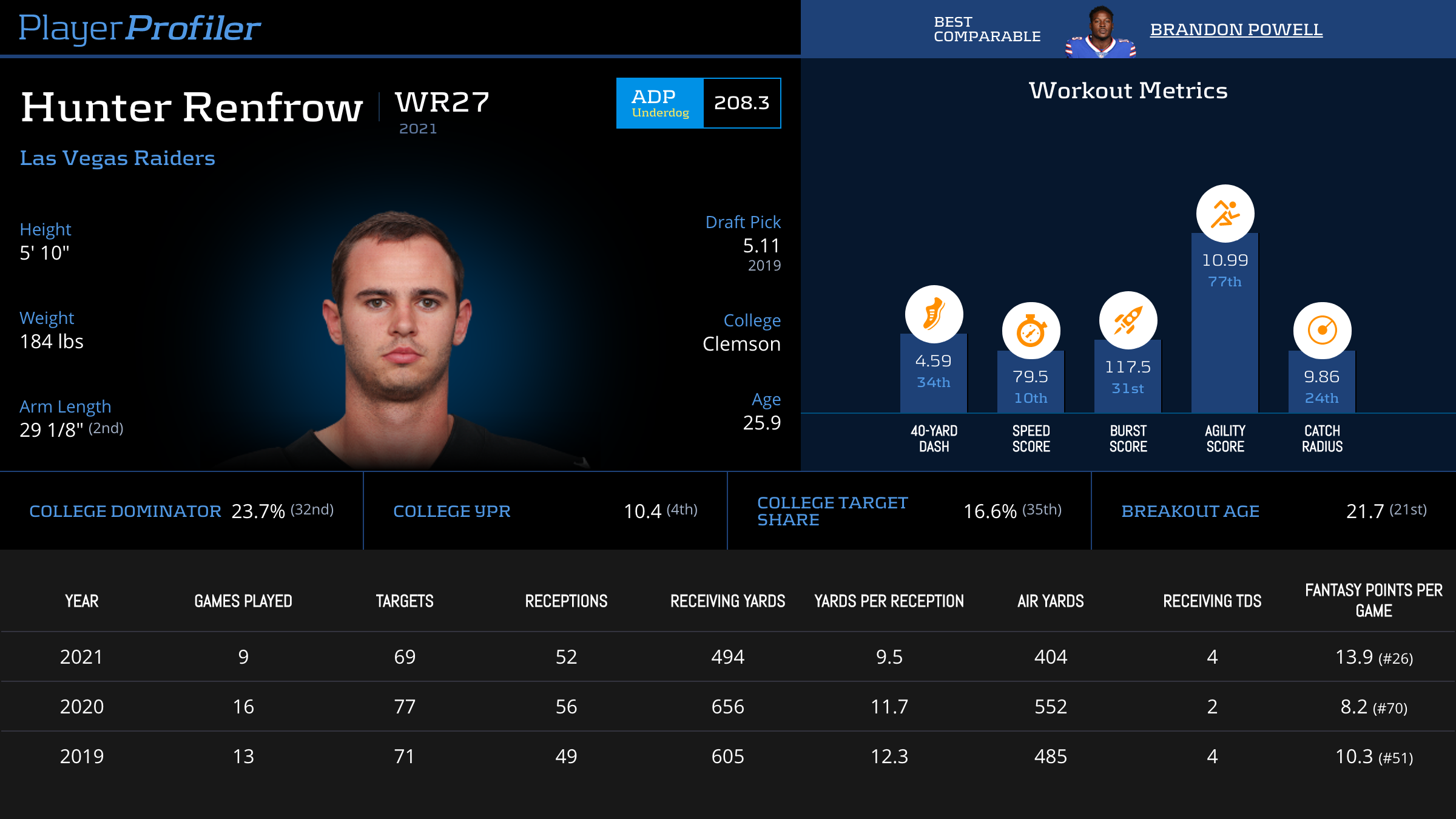 The Raiders rank No. 1 in pass completions of 20-plus yards while the Bengals rank No. 7 in such pass completions allowed. Yes, DeSean Jackson was brought in to try and replace Henry Ruggs‘ field stretching ability. But after fumbling his only target in Week 10, I’d expect Carr to lean even more on his most reliable target, Renfrow.

Checking in as our WR2 (by projections), Tyreek Hill finds himself in an interesting spot facing the Cowboys. Though the Cowboys defense has been good against the pass (No. 9 DVOA), the high game total and fast paced environment takes precedence.  Despite their similar Target Shares, Hill edges out Kelce as the preferred stacking option because of his Deep Ball proclivity (27.7-percent and 21.7-percent respectively). The Cowboys are susceptible to deep shots which is Hill’s game. The Cowboys allow the No. 9 most 20-plus pass yards downfield to opposing receivers. Hill’s 2 Deep Targets Per Game average is second only to Marquise Brown.

While the whole Bills receiving corps is in play with such a high implied team total (28.5), the touchdown upside of Emmanuel Sanders is the most alluring.

Watching this Cole Beasley rib injury. Blowout perhaps played a factor in Week 10, but he was really limited.

As noted above, the Colts low-key have allowed a league worst 85.19-percent Passing Touchdown rate. So, if we’re touchdown hunting why not consider the only Bills receiver who has two double touchdown performances this season. Sanders projects as the lowest rostered of the three as well (3.1-percent projected ownership).

Finally there’s some decent tight end options on the main slate! I legit can’t even remember a slate filled with this much tight end talent. Of the big boys up top, George Kittle stands out though at an $800 discount from Travis Kelce. Kittle looks re-invigorated after returning from a calf injury that sidelined him earlier this season.

The 49ers have a solid 26 point total facing the Jaguars. With a lot of player ownership likely funneling to Deebo Samuel, Kittle makes for a lighter owned leverage play. Kittle ranks No. 1 in Target Share (25.4-percent) and No. 2 in Yards Per Route Run (2.6) amongst tight ends.

It looked as though the Bills wanted to ease tight end Dawson Knox back into the offense in a game against the Jets that was won handily. In his return from a two-game absence, Knox only saw one target. The silver lining here is that he led all Bill’s tight ends with a 84-percent Snap Share and came away with no setbacks. I would expect the Bills to use him more in Week 11 as the Colts rank No. 3 in aFPA to tight ends. I’m really feeling the Allen, Sanders, Knox galaxy brain stack.