Air Yards are back on PlayerProfiler! I am thrilled to write up this article again this season. So enough small talk, let’s get to it.

The best value Air Yards play on the week is always scored with a value of 100. All other players are compared against that player with decreasing value. This list is not a mere recitation of where each player is ranked — a simple machine could do that. This list contextualizes each player’s Value Score so as to present the top ten Air Yard values in DFS for the week, focusing on players priced at or below $5,500 on DraftKings.

We will highlight two wide receivers on the Air Yards Value Index priced above $5,500 and then focus on the top ten Air Yards value plays priced at $5,500 or below on DraftKings.

The perpetually under valued Brandin Cooks resides on the top of the value play list, a place he may as well call home. While some fantasy prognosticators were scared off of Cooks because of a perceived poor Texans offense and the potential emergence of sleeper candidate Nico Collins, both of those narratives were laid to rest in Week 1. Davis Mills was sufficiently average throwing the football posting a 95.2 True Passer Rating (No. 12 among quarterbacks), and Cooks handedly out-targeted Collins 12 to three.  Cooks is a strong play in all formats.

Cortland Sutton vs. Jerry Jeudy for the top spot of Russell Wilson targets was a popular debate this offseason. While those who were touting Jeudy might look to claim victory, as Jeudy outscored Sutton in fantasy points last week 20.2 to 11.2, they have likely won the battle but lost the war. Sutton dwarfed Jeudy in Air Yards 141 to 85 despite seeing the same amount of targets. Sutton is going to go boom at some point, and this week against the Texans is a likely explosion spot.

Rashod Bateman’s debut as the Ravens alpha WR went well thanks in large part to a 55-yard bomb of a touchdown where Bateman got behind both safeties. Despite seeing only five targets, Bateman saw a lot of Air Yards and left a lot of points on the field with 61 of those Air Yards being unrealized. He technically scored a tad lower in the model than Robby Anderson. However, at $5,500 his days of a value play are limited, so we highlight him here. Take advantage of the discount while you can.

Trevor Lawrence threw the ball 42 times this past Sunday against the Commanders with Marvin Jones finishing No. 3 on the team in targets with six. Jones finished behind free agent acquisitions Christian Kirk and Zay Jones. Jones narrowly led the team in Air Yards as he saw only four more Air Yards than Kirk and 21 more Air Yards than Zay Jones. As M. Jones lagged behind both of his aforementioned teammates in targets, he is likely the most volatile of the three receivers on the Jaguars. However, with projected ownership at only 1.2-percent (No. 118 among wide receivers), he makes for an interesting contrarian hail mary play in tournament formats.

Jakobi Meyers in cash was a mantra I often repeated last season. His usage this past week suggests that it will continue this year. Meyers led the Patriots with six targets and 89 Air Yards.  His average depth of target did increase to 14.8 (No. 14) compared to last years mark of 9.6 which may hint at some spike week potential. However, it’s too early in the season for this data point to supplant any priors regarding Meyers high-floor, low-ceiling range of outcomes.

Donovan Peoples-Jones seeing more Air Yards than Amari Cooper is just how we predicted this would play out Week 1, right? The third-year wide receiver also saw a 36.7-percent target share. This was the fourth highest target share in the entire league.  It would be shocking if this is how things continue in Cleveland this year. However, with ownership protected at only 1.3-percent (No. 117), Peoples-Jones is worth some exposure in tournament lineups in case this usage is not the mirage most, rightfully, think it is. 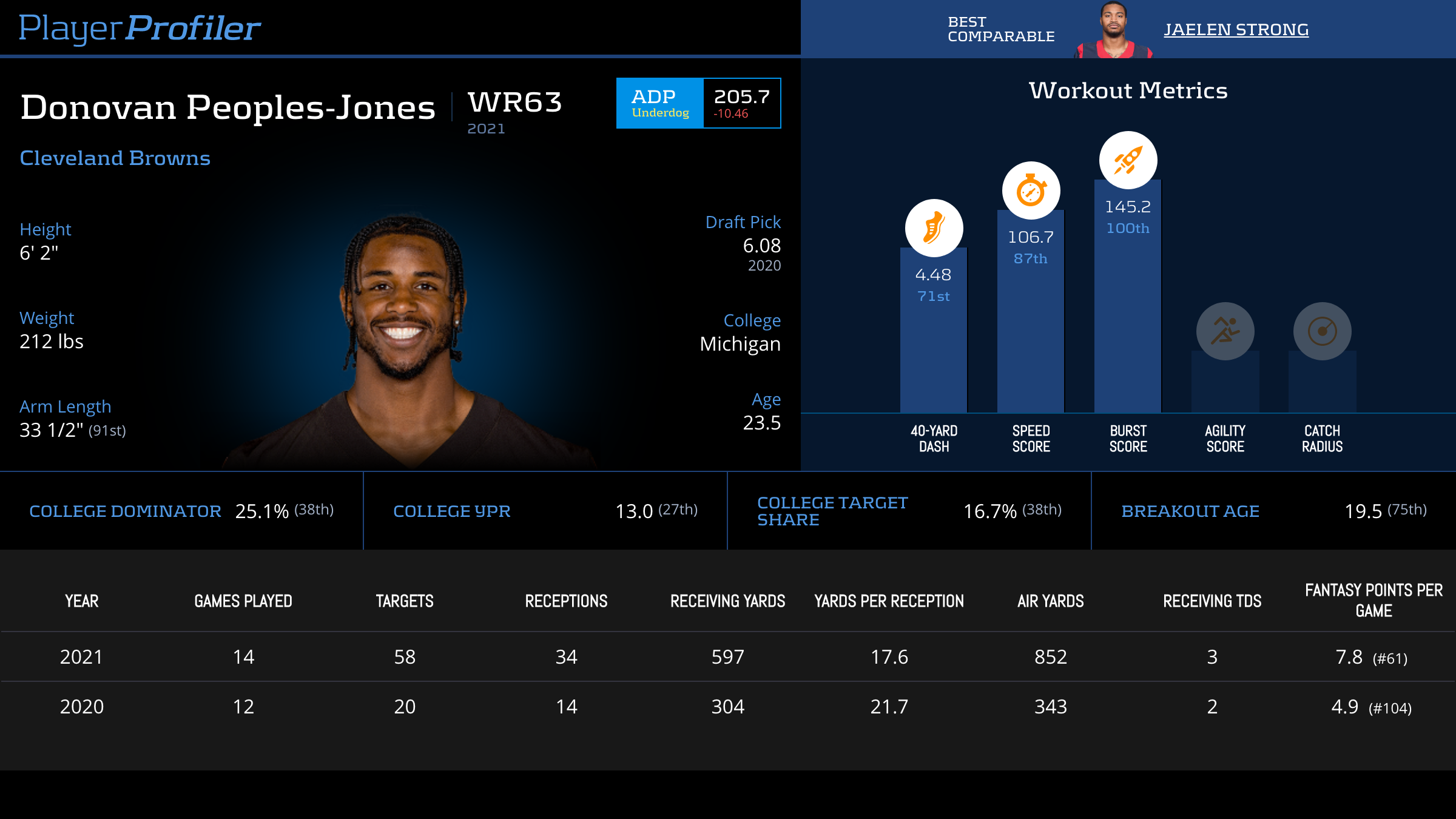 Julio Jones is back running routes on a football field. Despite seeing only five targets, Jones led the Buccaneers in Air Yards. He is truly a boom-bust tournament option with an Average Target Distance of 22 yards (No. 2) and makes for a spectacular tournament play against the Saints this week. Of note, Breshad Perriman, who was left off the list in favor of Julio, operated as Julio’s caddie seeing 86 Air Yards on three targets with an Average Target Distance of 28.7 yards (no. 1). This is a role in the Buccaneers passing attack worth monitoring and exploiting in DFS tournaments.

Richie James led the Giants wide receivers with six targets and 50 Air Yards after replacing an injured Wan’dale Robinson. James and Sterling Shepard, who was good for 41 Air Yards, essentially accounted for the entire Giants wide receiver passing attack.  Robinson’s health, and Kadarius Toney’s doghouse status, is something to monitor. James will likely slide into the same role in the Giants offense as he had in Week 1 if both of these factors remain constant. At only $200 more than the minimum price, James is a great cash play with double digit point upside against the Panthers.

Jarvis Landry made his debut with the Saints last weeks and surprisingly saw similar opportunities to Michael Thomas. Landry saw one more target than Thomas and 24 more Air Yards. However, it was Thomas who outscored Landry in Week 1 as a result of hauling in two touchdowns. Priced $800 less than Thomas, and seeing similar opportunity, Landry is a recommended play in all formats this week in what could be sneaky high scoring game against the Buccaneers.

D.J. Chark was signed this offseason by Detroit to provide a lid lifting threat to the Lions offense, and he did just that last week. With Detroit in comeback mode against the Eagles, Chark saw eight targets and averaged 15.8 yards of target distance (No. 12). He also led the Lions in Air Yards. Detroit’s boundary receiver should seeing plenty of high ADOT opportunities, and this makes for a great tournament play in Week 2 against Washington.

Somewhere, the Podfather is smiling. Ashton Dulin appears to be the preferred down field target of Matt Ryan outside of Michael Pittman. Dulin was essentially splitting reps with rookie Alec Pierce. Pierce ran 27 routes, while Dulin ran 16 routes. However, Dulin out targeted the rookie six to two and finished with only eight Air Yards less than Pittman in Week 1. Pierce is currently nursing a concussion, and his availably for Week 2 is up in the air. If Pierce misses time, Dulin may see a lot more than just a 32-percent route participation rate. Simply put, Dulin should be someone to consider as a tournament dart throw.

Corey Davis remained the Jets primary wide receiver target despite the off-season hype of second-year wide receiver Elijah Moore and rookie first round pick Garrett Wilson. Davis out targeted both of his teammates and was the Jets’ leader in Air Yards. With Joe Flacco as his quarterback, and Davis likely seeing coverage from all-pro Denzel Ward this week, I’d shy away from exposure. However, if forced to play him, I would reserve him as a cash play only.

Good luck to everyone in Week 2. May all your Air Yards be realized.