Each week, fantasy players question which of their players to insert into lineups and which to bench for that week. A key component in that process is highlighting easy or difficult matchups for players. While an easy matchup does not guarantee a player to have a great performance, it’s certainly a better bet. In this weekly piece, I shine the spotlight on a few different matchups to keep an eye out for as you make your lineup decisions. This is the Matchup Monitor!

While Jonathan Taylor is the headliner in the Colts backfield, Nyheim Hines‘ pass-catching offers value for fantasy. Hines caught six passes in Week 1, for 50 yards. He has at least 40 receptions each year of his career and achieved 1.63 (No. 11) yards per route run last season. 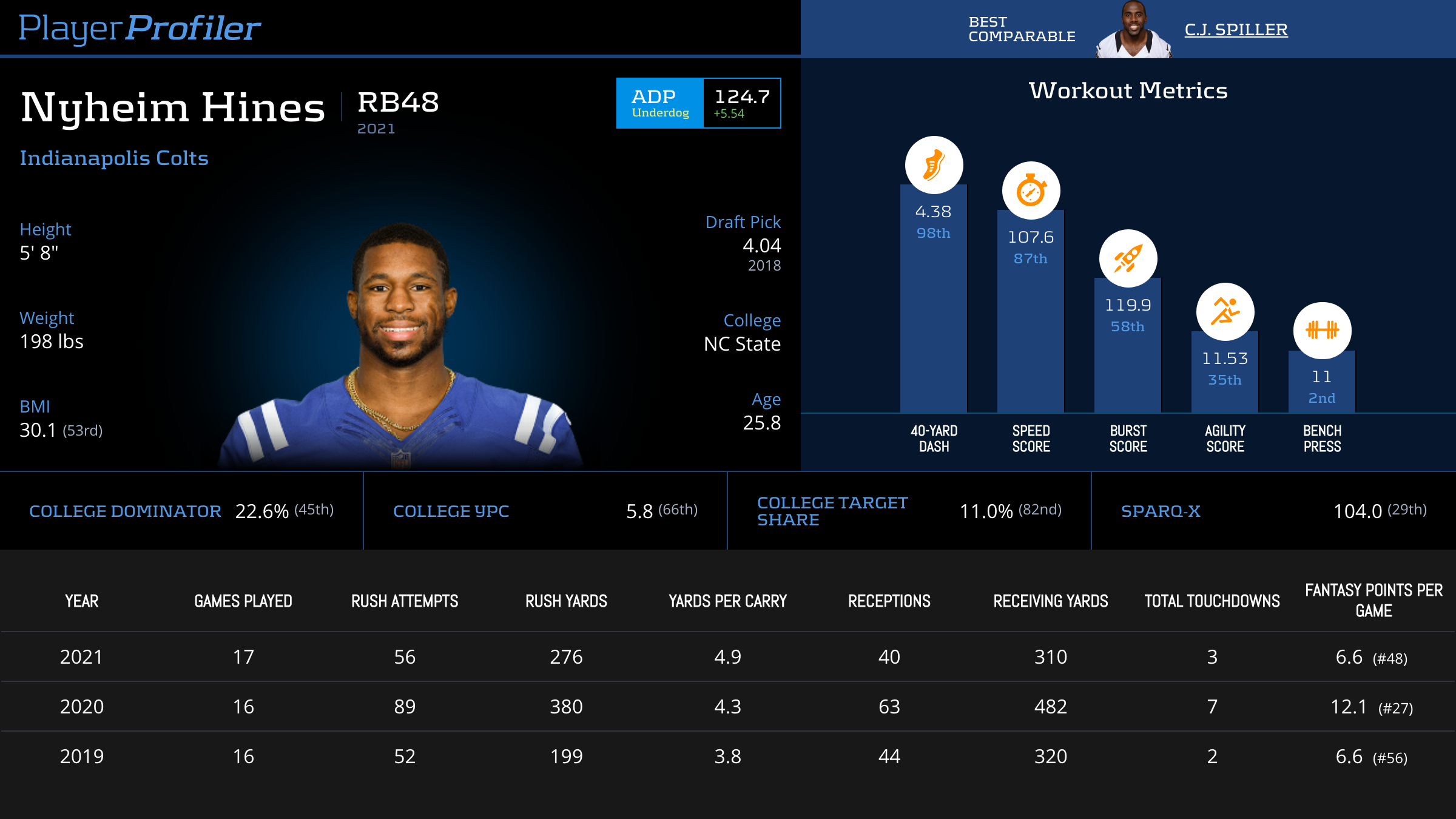 The Jacksonville defense yielded 10 receptions to Washington RBs in Week 1. Antonio Gibson and J.D. McKissic were the beneficiaries of high-volume passes, and Hines looks to be in for the same against Jacksonville linebackers. Matt Ryan is not the most mobile QB, so look for him to target Hines when under pressure from Travon Walker and company. Ryan loves targeting his running backs, and the Jaguars defense allowed high pass volume to RBs to start the season. It is wise to elevate Hines this week.

Buffalo’s backfield still feels icky especially with Josh Allen‘s rushing skills factoring into carry distribution. However, it looks like Devin Singletary is the primary back for now. Singletary got the most carries among Bills RBs and was the most efficient runner out of the backfield. 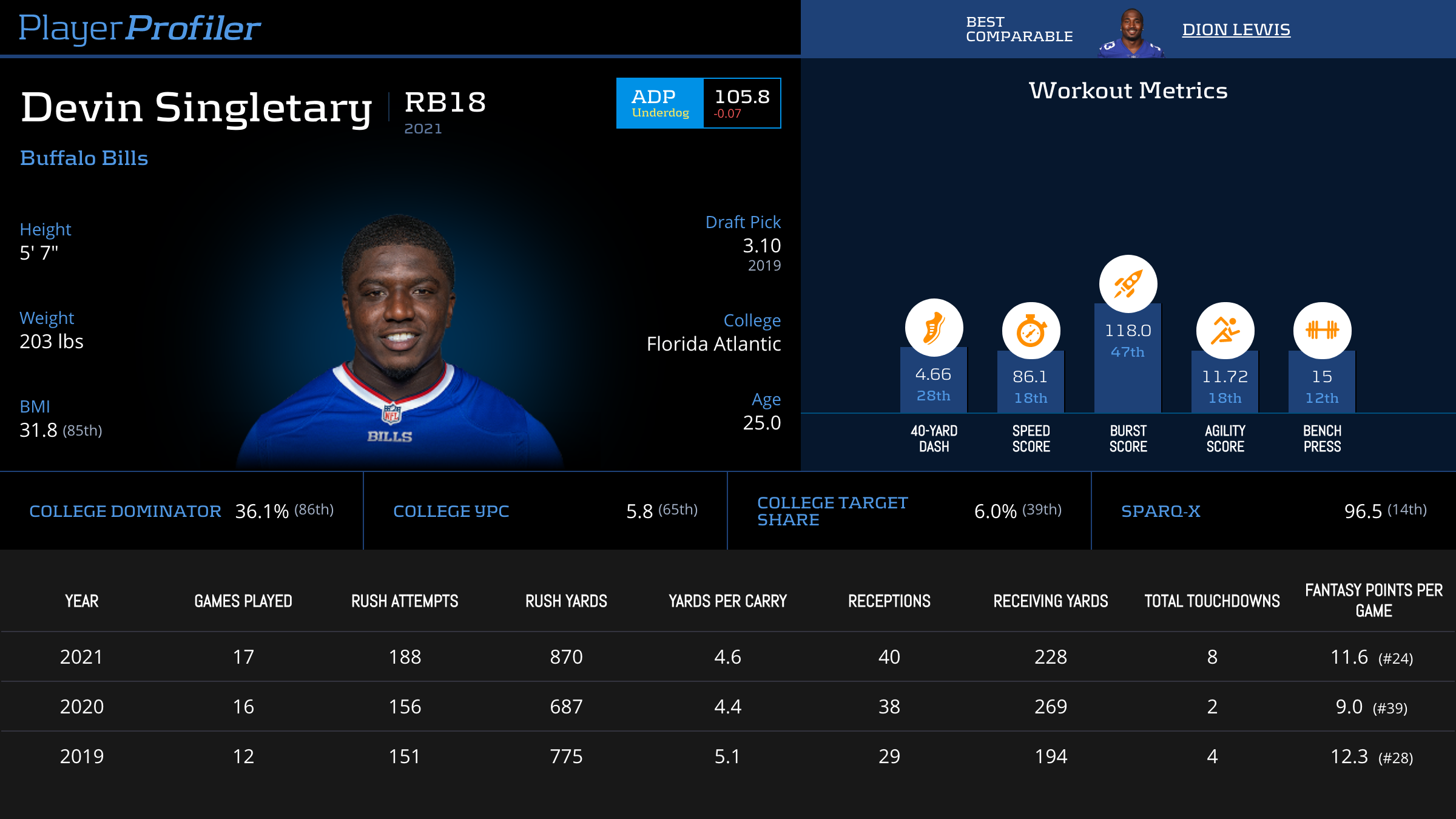 The Titans gave up a whopping 164 yards to Saquon Barkley on the ground in Week 1. The Giants ran for over 200 yards total against Tennessee, and Barkley tacked on six receptions. Singletary had 67 (No. 13) evaded tackles last season, so look for him to take advantage of the Titans’ poor tackling that was on display Week 1. The Bills are the better team in this matchup, so a lead would open more rushing opportunity for Singletary as well. Boost him for Week 2.

In Week 1, the New Orleans Saints allowed over 200 yards rushing on over 35 carries to the Atlanta Falcons. Cordarrelle Patterson and Marcus Mariota each averaged over five yards per carry and scored. While New Orleans was one of the best run defenses in the league last season, it lost Kwon Alexander, a good coverage linebacker against running backs, last offseason. The Saints struggled against Patterson Week 1 and may have a tougher time against a better run game in Tampa Bay. 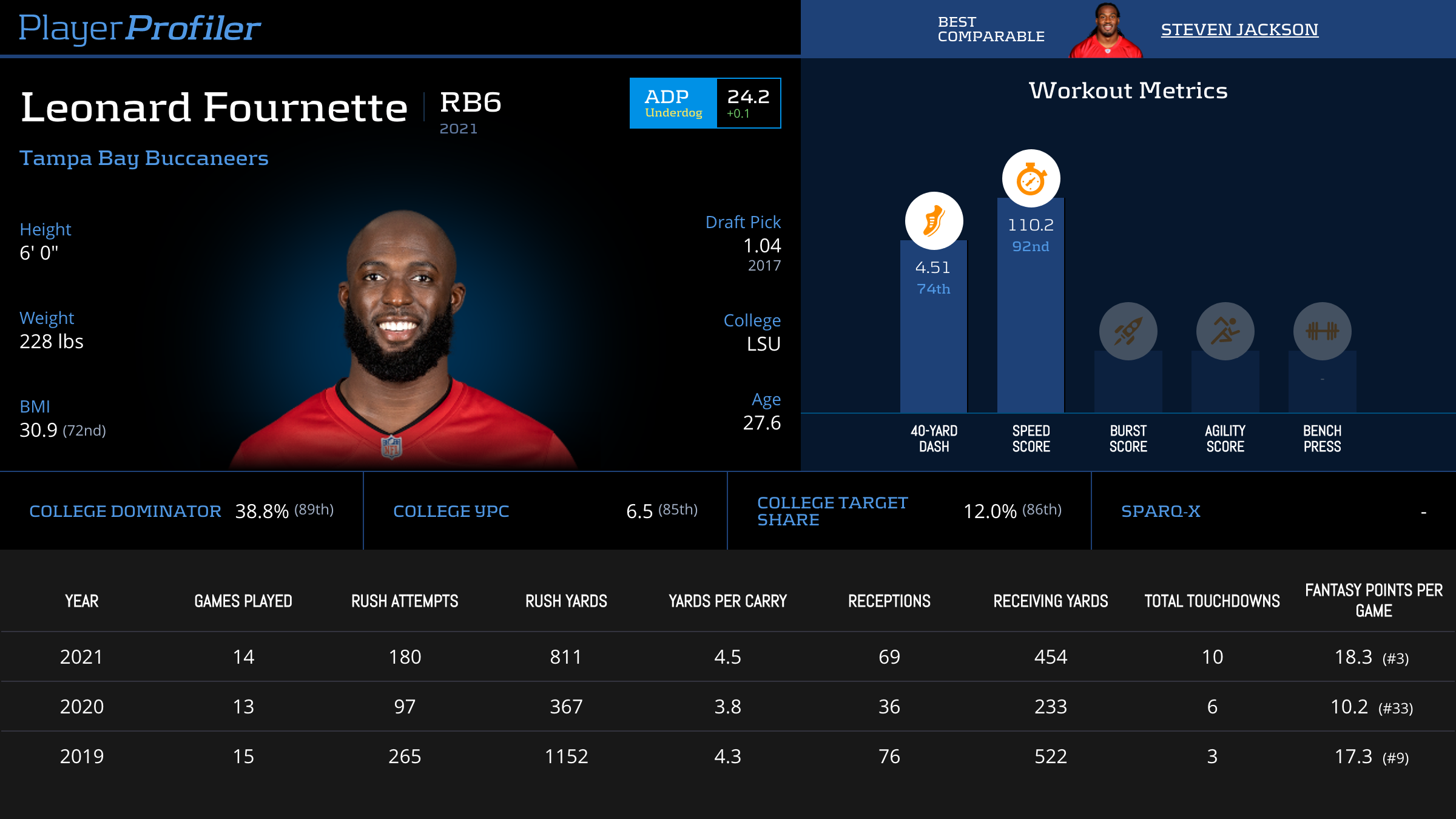 Leonard Fournette had 23 touches for 137 yards on Sunday night. Last season, Fournette averaged 18.3 (No. 3) Fantasy Points Per Game as a dual-threat rusher and receiver, with 10 total touchdowns. Expect him to see major rushing volume again and for Tom Brady to find him on mismatches when running routes against Saints linebackers. Fire up Fournette with confidence.

In Week 1, Damien Harris and Rhamondre Stevenson were close to a 50/50 split of touches. Harris was more efficient and looks to be the safer option of the two, but neither back broke 10 carries in the opener against Miami. 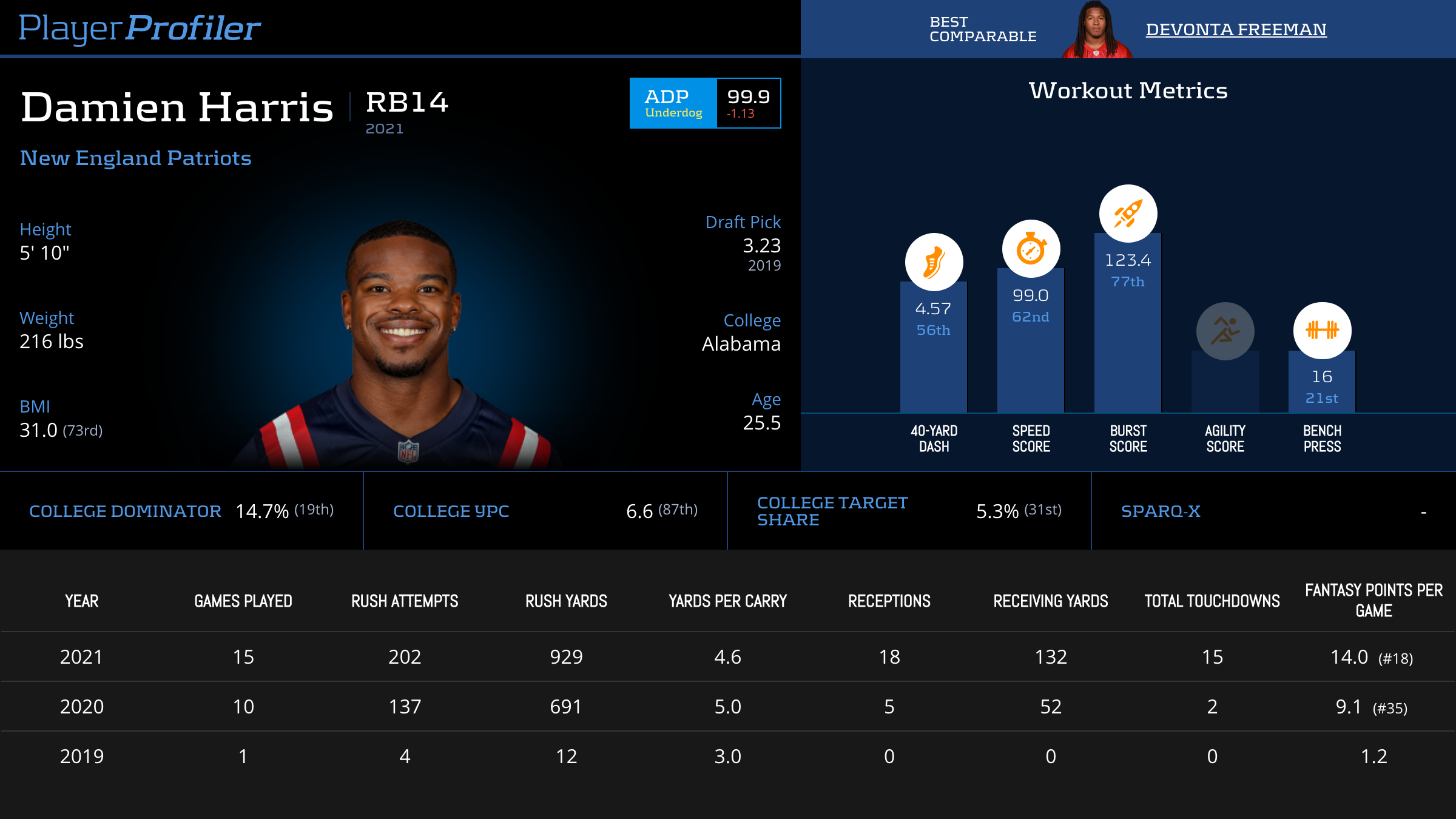 The Steelers run defense held up well against Joe Mixon Week 1. Mixon saw 27 carries but was held to three yards per carry. The Steelers did allow 10 receptions to running backs, but Ty Montgomery is the pass-catching back more so than Harris or Stevenson. New England’s run blocking was not the greatest against Miami, and Pittsburgh boasts a defensive front that can clog run lanes. Losing T.J. Watt hurts, but new additions Myles Jack and Larry Ogunjobi should continue to improve what was a bad run defense last season. Because they are facing a stifling defense and a murky backfield split, don’t expect Harris and Stevenson to boom this week.

While A.J. Brown went nuclear Week 1, Jalen Hurts was tamer. Hurts ran for 90 yards and a touchdown but completed just over half his passes for 243 yards. The Eagles offense looked to run through Brown and the ground game. 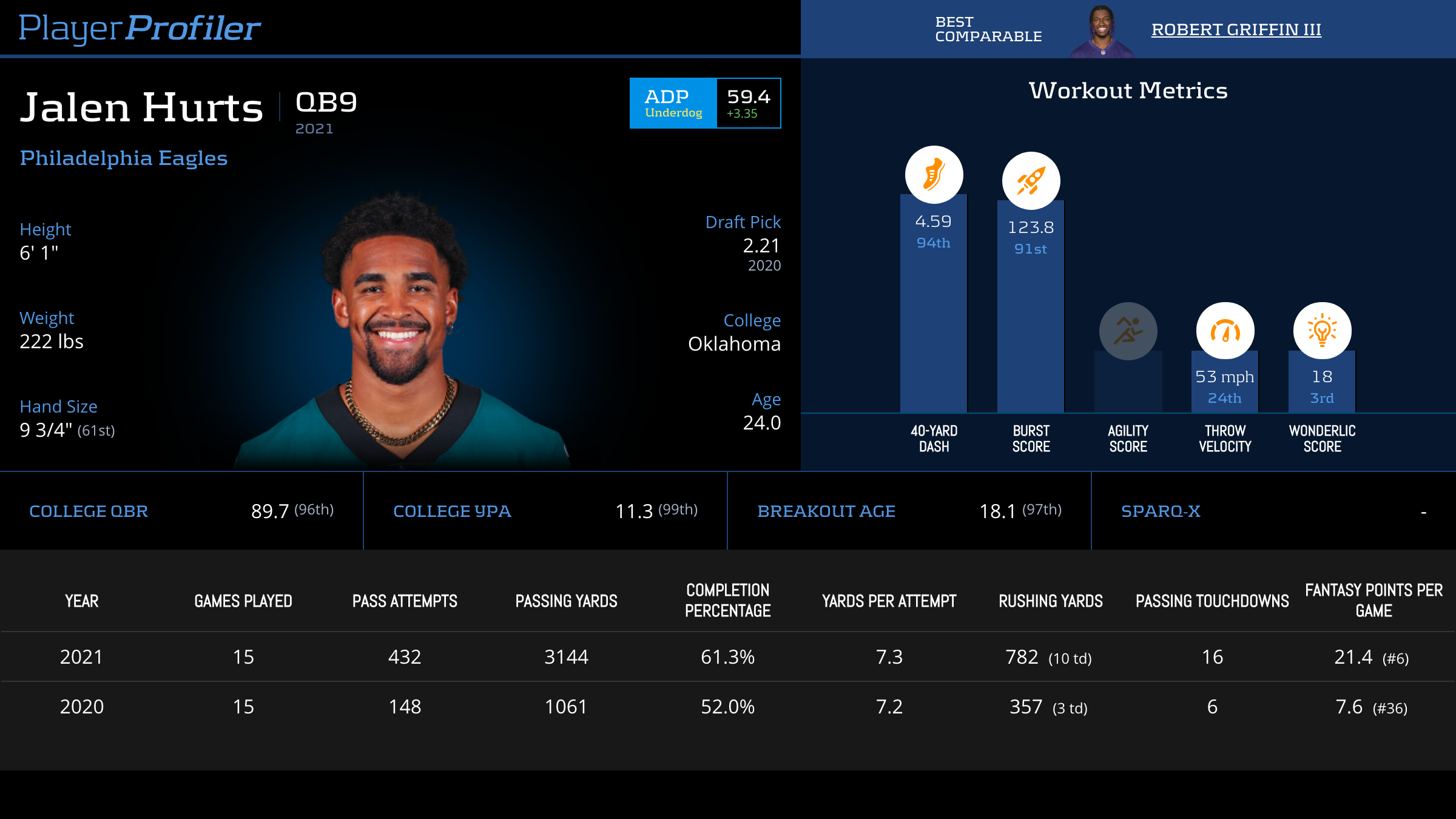 The Vikings held Aaron Rodgers to less than 200 yards, no touchdowns, and an interception in the opener. New additions Jordan Hicks and Za’Darius Smith wreaked havoc up front with Danielle Hunter. Patrick Peterson in the secondary with Lewis Cine potentially returning in Week 2 will also make Hurts’ life harder. Opponents were No. 23 last season in scoring QB rushing fantasy points against Minnesota, and Hicks and Smith make Hurts’ chances of a big rushing day even more difficult. Facing an improved Vikings defense, don’t expect Hurts to put on a show this week.

The Vikings' defense came in from ALL angles to sack Rodgers 😳

If you drafted Dameon Pierce, you certainly don’t like seeing Rex Burkhead receive more snaps than Pierce Week 1. Burkhead was more productive through his receiving abilities, but neither back averaged more than three yards per carry. Pierce has an underwhelming profile out of college, and Burkhead is an older pass-catcher. Neither option is an enticing play against a tough matchup. 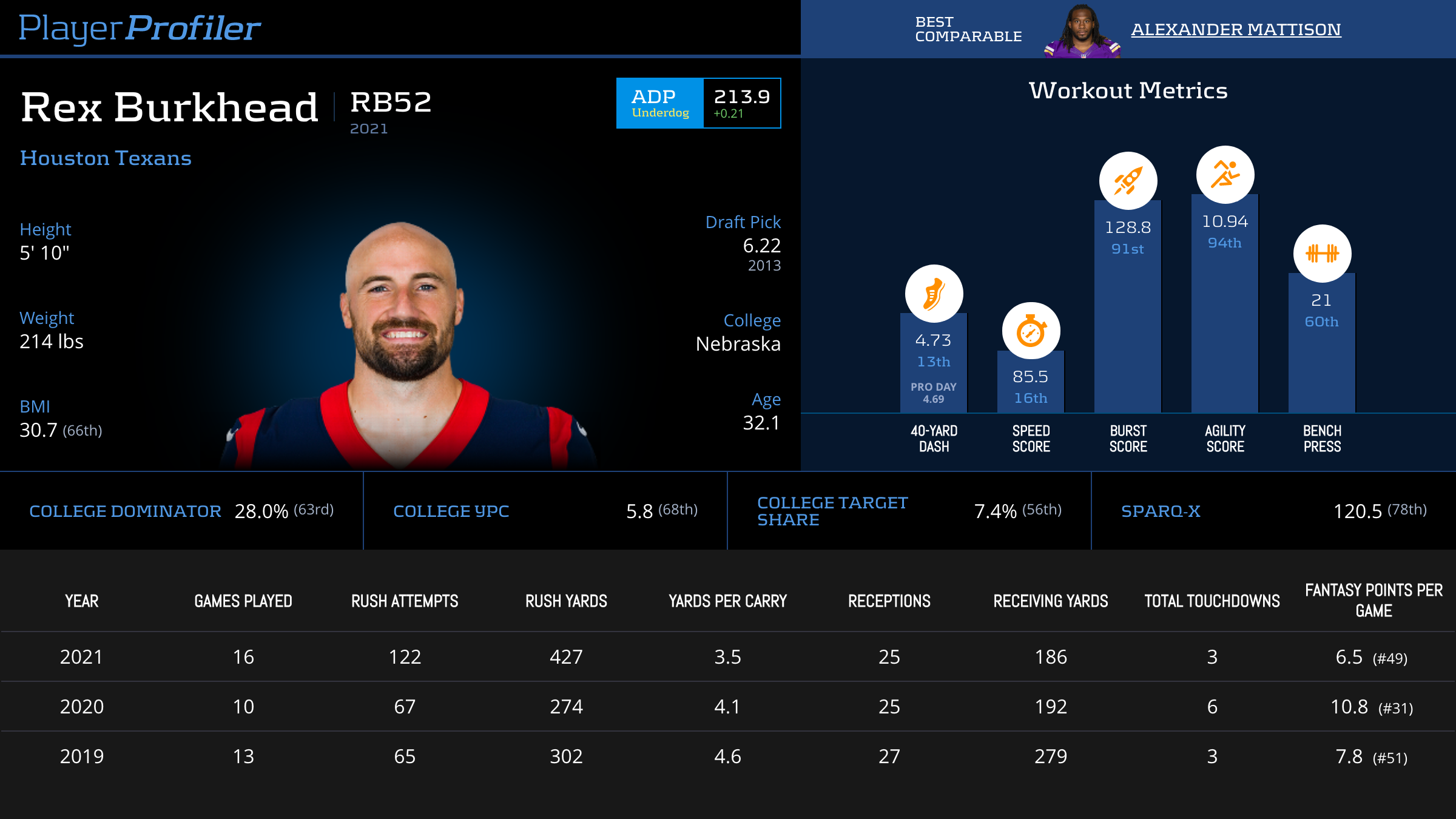 The Broncos have a formidable defensive line and allowed less than 100 yards rushing to Seattle in Week 1. The majority of those yards came in the first half. They also allowed two receptions to running backs and were able to contain Rashaad Penny in the second half of Monday night’s game. With a Texan offensive line that has room for improvement, Houston’s backfield is not likely to smash. Rather than trying to choose between Burkhead and Pierce, sitting both is the best move against a solid Denver defense (and until they face a truly bad defense).