Zero RB is everywhere.  So much so that you may be thinking, “Oh not another Zero RB draft guide, let me just get to where this guy tells me which running backs he hates this year.”  I get it.  It is not easy to draft five wide receivers before you draft a running back while you watch your league mates put together a one-two punch at running back.  The goal of this article is to soothe your soul as you combat those betraying thoughts of abandoning your strategy in the third round by giving you a realistic understanding of what a Zero RB roster might look like.

Note: All ADP data used here is taken from MyFantasyLeague Redraft PPR leagues as of 8/8/2016.

Let us suppose that we are drafting at pick #6 and work through the draft with the impossible assumption that we are never going to be able to pick a player with an ADP (rank) earlier than the draft spot.  All numbers in parenthesis represent the ADP rank of the player.

Stick to your guns.  Take the top 5 WR with an elite production profile. Whoever you have ranked as the number 1 RB this season has concerns.  Todd Gurley (4) – lack of involvement in passing game.  David Johnson (7) – will Arians commit with the rest of the backfield healthy?  Adrian Peterson (14) – 31 years old, not involved in passing game, and was overly reliant on big runs last season.  Ezekiel Elliott (8) – getting 16 games of elite production from a rookie RB is rare.

Devonta Freeman is there!  He was the No. 1 fantasy RB last year!  Must draft him, right?  No.

Everything went right for Devonta Freemanlast season. Tevin Coleman got hurt (twice).  The Falcons started out 6-1, and Roddy White fell off a cliff (ok, only his production fell off a cliff).  Solidify your WR corp with a second sure-fire top 10 WR with upper-percentile College Dominator Rating, Breakout Age, and SPARQ-x. Remember: The value of a running back is more fragile than that of a receiver.

Lacy and Martin have both been year-end top 10 RBs, but they have also been outside of the top 20 at year end. Both share backfields with RBs with better receiving skills and who have flashed better efficiency.  Luck/Rodgers?  Come on — I thought we abandoned #EarlyRoundQB years ago!  Have you heard how many QB1’s there are this season?  Randall Cobb was a top 10 WR in the last season playing opposite Jordy Nelson, and if you are reading this article then you know that no one around here would blame you for a gamble on Donte Moncrief (40).

Other options: Jordan Reed (36 – yes, you’re allowed to consider a TE here, but frankly the health risk in the 3rd is definitively not an anti-fragility play), Kelvin Benjamin (35), Golden Tate (39), Donte Moncrief (40)

Thomas Rawls (44) is my last chance at a likely fantasy RB1.  The Seahawks front office drafted two running backs in a league where nobody drafts RBs, but the small sample was so good last year!

What is the goal here?  To give yourself a greater likelihood of outscoring your opponent on a weekly basis.  Why take the risk on Rawls at this point if you can all but guarantee that you’ll have the best WR1-4 in the league?  Take the player with top 24 WR production in over 50-percent of his games. 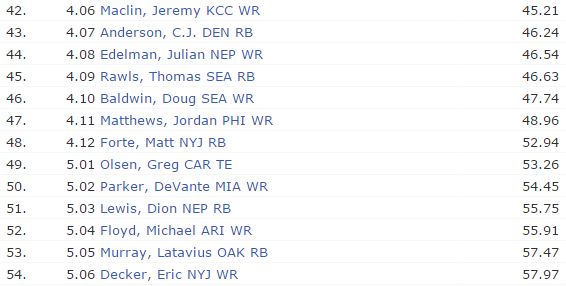 There is a drop-off at WR coming, but we sure aren’t there yet.

I already have four WRs! If Michael Floyd (53) had fallen then maybe I could have taken another WR, but I have to take a start thinking of my lineup. Oh – Duke Johnson (56) as my RB1?  I guess it is time to settle.

But how is Eric Decker (55) still available?  He was the No. 11 fantasy WR last year.  Also not a bad spot to pick the last of the QB1 tier – Drew Brees (59) has been a top six QB three seasons in a row and the Saints reloaded at skill positions this offseason adding Coby Fleener and Michael Thomas.

Surely have to take an RB here. Jeremy Hill (70) is now the best chance I have at an RB1.  I better just suck it up and take the TD upside.

Zero RB successfully executed, I now have a weekly advantage at wide receiver, so I can afford to take some risks. Ben Watson was the TE8 in fantasy football last season in the Saints offense.  If Ben Watson can do it…

You know what, those are some attractive RBs!  What is left at WR – Marvin Jones?!  I sure am glad I loaded up on WRs!

This whole WR thing really has me thinking, “DeSean Jackson looks amazing right now.”  Maybe if it were best ball, but relying on Jackson is terrifying.  T.J. Yeldon, however, was a top-30 fantasy running back last season.  Sure, Chris Ivory might take some work, but since when have we trusted Ivory to stay healthy or be involved in the passing game?

Ninth Round and Beyond

I think this is the point in the draft where I let you chicklets fall out of the nest and find value yourselves. Consider that in this scenario we were not able to select any players that lasted in this draft past their ADP rank on MyFantasyLeague, and that scenario is unlikely in your home league, where it is likely that some players fall.

RBs yet to be drafted include Arian Foster (91), Charles Sims (102 and The Perfect Zero RB Target), Tevin Coleman (120), Rashad Jennings (124), C.J. Prosise (125).  History tells us that at least one of these or one of the backs drafted even later will end this season as a top 10 RB. I would caution against going too heavy on RB late in the draft, because there are still high upside WRs available.  Keep in mind that identifying ascending RBs is vastly more reliable than WRs due to RB being more fragile and increase in opportunity for talented RBs is easy to identify when starters begin to drop in preseason and early in the year.

I hope that this exercise has demonstrated that on the extreme end, finishing your draft with Ameer Abdullah and T.J. Yeldon as your RB1/2 is the “worst case” scenario when employing Zero RB, and in such a case, you would be giving yourself a clear advantage at multiple positions while maximizing both the floor and ceiling for your roster.