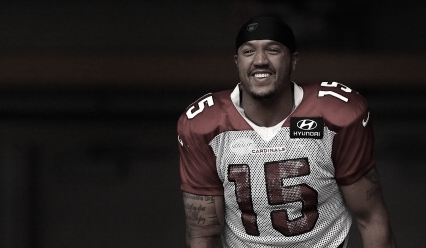 Let me let you in on a little secret.  There is a wide receiver out there going as late as the fifth or sixth round with a legitimate chance to crack WR1 status.  No, not Josh Gordon.  I’m talking about Michael Floyd.  What if I told you over a 10 week span Floyd was well on pace for that in 2015?  Surprising?  Yes.  Until you take a look at the advanced metrics.

At 6-3, 220-pounds with 32 7/8-inch arms (76th-percentile), Floyd checks all the boxes of the flanker, “Z” receiver, built to fill the lead role in an NFL offense.  Using PlayerProfiler’s Data Analysis Tool, I was quick to liken Michael Floyd to Alshon Jeffery.  However, Floyd’s inferior agility scores (16th-percentile) prevented the pair from being a perfect match, leaving Dwayne Bowe as his best comparable (a far less sexy option).  Floyd wasn’t that far of a stretch from Jordy Nelson either, who in a lot of ways he trumps athletically.

What separates Michael Floyd from the rest, is his 113.2 Height-Adjusted Speed Score (HaSS) (94th-percentile).  His size and strength combined with his elite straight-line speed makes him a premiere vertical threat.  He has a great ability to win off the line with his hands, giving him the step he needs to blow by defenders and create separation over the top with his speed.  He is also very strong at the catch point, often out-muscling defensive backs for 50/50 balls.

For those that take stock in draft capital, Michael Floyd was a first round pick, posting a commendable 39.4-percent (76th-percentile) College Dominator Rating at Notre Dame.  He also performed right out of the gates at South Bend, hitting his Breakout Age at 18.8 (93rd-percentile), en route to four seasons of 700+ yards and at least seven scores.  Floyd’s 90th percentile status in these two performance metrics makes a strong case for Floyd to find success as the No. 1 target in an NFL offense.  The list of first round receivers to hit College Dominator and Breakout Age percentiles that high: Amari Cooper, DeAndre Hopkins, Dez Bryant and Hakeem Nicks (tremendous company).

In a crowded Arizona receiving corps, including a sure-fire Hall of Famer in Larry Fitzgerald, emerging as the No. 1 has been an impossible task for Michael Floyd.  But Floyd believers can take some solace in the fact Fitzgerald appears to be fully transitioning to the slot role.  Floyd’s other competition, John Brown, is the irrefutable perfect fit for the split end, “X” role in Arians’ system.  That leaves the coveted flanker spot finally there for Floyd to assume.  Arizona threw the ball 590 times last season.  Fitzgerald saw 146 of those targets, while Brown received 101 and Floyd was left with just 89.  In his new role Floyd is sure to see a big boost in targets in 2016.  If you’re still skeptical, we already saw that down the stretch of 2015, but we’ll get to that in a minute.

Although Larry Fitzgerald turned back the clock for a remarkable 2015 effort, posting a +12.7 Production Premium score, an argument can be made that we still saw a changing of the guard in the second half of the season.  The game splits really shine light on that.

*Week 17 was excluded. Arizona no-showed against Seattle, having already clinched a first round playoff bye.

Larry Fitzgerald was on a torrid pace in the first 10 games of the season, tracking for a top-5 finish in PPR formats.  But down the stretch he cooled off a bit, as evidenced by his WR27 pace, which calls into question the sustainability of the now 33-year-old receiver.  Meanwhile, Michael Floyd (only 26) caught fire, averaging 16.8 points per game over a 10-week stretch from week 6 to week 16, which would have landed him a top-10 PPR finish had he performed that way for a full season.  So where was he weeks 1-5?  What WR1 realistically disappears for such a long stretch?  How can you trust him? Taking a closer look at Michael Floyd’s 2015 game log.  You will see an abysmal 5-game stretch to start his season can almost undoubtedly be attributed to his recovery from a preseason injury in which he dislocated three of the fingers on his left hand.  I repeat.  HE DISLOCATED THREE OF THE FINGERS ON HIS LEFT HAND!!  Call me crazy, but I think the man deserves a pass for the slow start.  It might explain why he caught just eight balls in five games then completely flipped the switch the rest of the season.  Analyzing the game splits again, Floyd’s target pace jumped from 56 to 121 (+32 impact on his season total) in the 10 weeks following his retched start.  A pace that represents the target floor he should expect to see in his new role.

Since entering the league, Michael Floyd has been one of the more efficient wide receivers in the NFL.  He is one of only 13 receivers to post a positive Production Premium score in 2013, 2014 and 2015.  His best score (+15.7) came last season, ranking 20th despite the aforementioned five game start.  On top of that he averaged 9.5 yards per target, 13th best in the league.  If you only look at his numbers from weeks 6 through 16 again, Floyd averaged 10.3 yards per target, good for the fifth best mark and the best of any member of the Cardinals’ uber-efficient receiving corps.

Is WR1 in the Cards?

With Michael Floyd, the efficiency has always been there.  The opportunity has been lacking. It certainly appears like those two variables may finally collide and the potential results are tantalizing.  Looking for the best candidate to be this year’s Allen Robinson?  Look no further.  Michael Floyd is a first round draft pick with a dominant past in college at a very young age.  Floyd possesses rare speed for his size, an offensive genius calling plays for him and plenty of offensive weapons around him to create favorable match-ups.

Playing alongside a Hall of Famer, Michael Floyd’s opportunity to shine as the flanker was delayed from the get-go.  With Larry Fitzgerald transitioning to the slot, Floyd finally ascends to the position he was destined for when he left Notre Dame.  We saw glimpses of it in 2015 after he overcame a devastating injury to one of his receiving hands.  2016 will be the first season we see it in full effect (a contract year to boot). Given Fitzgerald’s ever-ticking eternal clock, WR2 seems like a safe guess for where Floyd might finish.  Even with that outcome, Floyd offers tremendous value at his current ADP (WR28).  However, I expect more from Floyd. We have tangible evidence Floyd has top-10 production in him and the metrics to back it up. This is the year the Cardinals see a major return on their first round investment, as Michael Floyd flies to new heights.