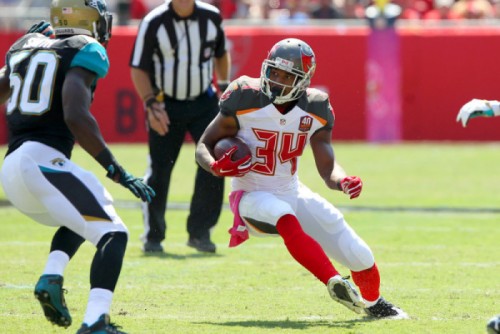 With Zero RB all the rage around the water cooler these days, it is crucial to identify the late round running back that can lead your fantasy football team to the promised land. It’s rare to find one of these players with standalone value before the season starts.  Especially when they are known not to be “the starter” for his team.  Going further down the rabbit hole, how many “PPR backs” have the size and pedigree to handle all the rushing carries should the early down grinder succumb to an injury?

Charles Sims entered the NFL as an intriguing prospect. In 2013, Sims led the West Virginia Mountaineers in carries (208) and was tied for first in receptions on the team (not just the RBs) with 45. For a tallish back, Sims has elite speed and burst evidence by a 4.48 (80th-percentile) 40-yard dash time and a 126.8 (86th-percentile) Burst Score.  He is built similarly to his Best Comparable Player, DeMarco Murray, who is only one year removed from leading the league with 392-rush attempts.

Charles Sims‘ 2014 rookie campaign was shortened by torn ligaments in his ankle.  Sims didn’t play in his first game until Week 10 and then immediately appeared on the injury report the following week with a sprained ankle. Frankly speaking, he was awful in 8 games, generating only 2.8-YPC on 66-carries.  Charles Sims averaged 4.4-yards per touch indicating that he was slightly more effective on his 19 receptions.

The disappointing efficiency resulted in an ADP of RB51 (147th overall) in 2015 MFL10s.  Charles Sims returned that value three times over with a RB16 finish.  Sims is no longer flying under the radar but is he still undervalued?

Charles Sims‘ current ADP, which can be found on his PlayerProfiler.com Player Page, is 82.2 (RB31). Which means you can typically get him anywhere in the 7th round of MFL10 drafts.  Sims is being drafted TWO FULL ROUNDS AFTER other elite committee passing down specialists such as Duke Johnson, Danny Woodhead and Giovani Bernard. Does anyone remember the 8th round passing game specialist RB from 2015 whose value soared once his backfield mate got injured?

Devonta Freeman didn’t even lead the NFL in RB targets or receptions and still finished as the overall RB1.  Why?  Because of an injury, a barren RB depth chart and his passing game chops (which I talked about last July) that kept him on the field in all game situations.

Charles Sims has an even better pass catching pedigree than Freeman.  He proved his standalone PPR worth last season which more than makes him a value at his current ADP.  Sims’ rare size-speed-burst combination would enable him to ability to carry the ball 250+ times against NFL competition.  Few other Zero RB candidates possess Sims’ top-10 fantasy RB upside.

Tampa’s starting running back, Doug Martin, had a rejuvenated contract year in 2015.  He burst onto the NFL scene as a rookie and flopped the following two seasons due to injuries and ineffectiveness.  He was so bad that the Bucs chose not to pick up his 5th year rookie option prior to 2015.  Martin finished the season with the 2nd most rushing yards on the 2nd most carries in the NFL.  Looking closer at his efficiency metrics, while he was better, he was far from great once you get past his counting stats.

Meanwhile, Charles Sims was far more effective on a per touch basis.  He only played 38.8-percent of the offensive snaps, earning an opportunity (target or carry) on 39-percent of those snaps and still finished as a high-end PPR RB2.

Using the handy RotoViz Screener App to look at 2nd year running backs and how they fared the following year, there is a clear linear regression showing RBs who averaged 2 or more receptions per game saw their reception number increase the following year.  It is reasonable to believe that Sims’ 51-receptions (3.2 p/g) in 2015 represents his 2016 catch floor. Year 2 vs. Year 3 Running Back Receptions Per Game

Another reason to be optimistic about an increase in Charles Sims‘ target total is the ascension of second year QB Jameis Winston.  Winston was erratic to start his rookie NFL season.  The Buccaneers were in the bottom-10 of pass attempts.  Partly due to the coaches limiting the rookie’s exposure, partly due to Winston’s 15 interceptions and partly due to his bottom of the NFL 58.3-percent completion percentage.  We can only assume that those factors will change for the betterment of the passing offense in 2016.  The Heisman Trophy winner was over 65-percent completion percentage in both of his seasons at Florida State.

Additionally there are question marks surrounding the rest of the Tampa Bay passing attack. Mike Evans slumped in his sophomore season.  Will he bounce back?  Vincent Jackson, when healthy, was effective but is another year older.  Can he stay on the field?  Kenny Bell may be a major factor after redshirting his rookie season.  Will his athleticism translate to the NFL?  Then there is the ongoing saga that is Austin Seferian-Jenkins.  The mountain of a man was dismissed during OTAs for “not knowing what he was doing” by Head Coach Dirk Koetter.  Does ASJ even want to be a professional football player?  So while the Bucs have a talent-laden offense, they are comprised of young, unproven pieces still trying to figure things out.

If neither the No. 3 WR nor the TE can’t trusted to be a young QB’s safety net, the pass catching RB is the next best thing.

Tampa Bay was Football Outsiders 26th ranked pass defense in DVOA last year.  They added a cornerback in the first round of the draft but there is still reason to believe that this team will be playing from behind again in 2016.  I envision the coaching staff letting Jameis Winston loose a little more in year two as well.  That means good things for Charles Sims.  He is an efficient running back who has significant standalone PPR value with a top-10 RB best case scenario playing an every down role if called upon.  Sims is a high floor, high ceiling fantasy investment.  A consistent producer with the potential to return a massive profit, Charles Sims is the perfect target on draft day.