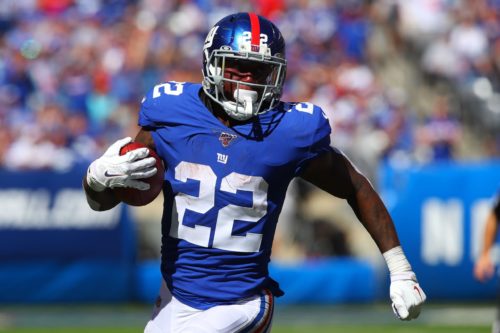 Week 7 of NFL action left us with multiple significant injuries, opening up the waiver wire for big ticket bidding in Week 8. Chase Edmonds is the hot name to add this week following a Kenyan Drake ankle injury; however, his current ownership of 67-percent means he will not find his way into this article. If he is available in your league, make sure to pursue him at all costs. PlayerProfiler’s advanced stats and metrics are here to help fantasy players navigate the waiver wire with precision.

Wayne Gallman‘s fantasy value was all but dead after the signing of Devonta Freeman to operate as Saquon Barkley‘s replacement. A stunning indictment following an offseason in which the coaching staff praised Gallman as having workhorse potential in the event Barkley were to miss time. His time in the spotlight has returned with 10 carries, five targets, and a touchdown following a Freeman injury in Week 7. The severity of the injury is unknown, but Gallman has RB2 upside if Freeman is out. Dion Lewis‘ productivity is non-existent in 2020 with or without Barkley, paving the way for a Gallman spot start in Week 8.

When given the opportunity in 2019, Gallman did have an RB1 week with 23.8 half PPR points. He has a brutal Week 8 matchup against a lights-out Tampa Bay run defense, but needs to be acquired since he has shown the most upside of the Giants RBs to this point and may be the starter for the foreseeable future.

After missing the last two seasons due to injury, Jerick McKinnon functioned as San Francisco’s primary back for much of the start of the season. It makes sense that the team wanted to rest him in Week 7 even with Raheem Mostert out. All of this bodes well for Tevin Coleman to slip back into the starting role upon his return from his own injury, which may be as soon as this week. Grab him now for a low bid before his imminent return is announced.

Lamical Perine and fellow rookie Denzel Mims are the lone bright spots on the Jets. Perine’s upside is still diminished by the offense’s overall output, but scoring a touchdown against the Bills was a positive sign.

Perine still exists as a dart throw in redraft, and a firm hold in dynasty. If he can produce down the stretch with Gase at the helm, one can only imagine what he can do in a post-Gase version of the Jets in 2021.

Carlos Hyde stepped in as Seattle’s primary back following a Chris Carson injury during Sunday Night Football. He led the team with 15 carries and four targets. With Hyde dealing with hamstring tightness and uncertain for Week 8, Carson week-to-week with his mid-foot sprain and Travis Homer battling a bruised knee, it’s a Wheels Up situation for DeeJay Dallas.

The only healthy back on a high-octane, Russell Wilson-led offense, Dallas is a great option for teams needing an RB spot start over the next few weeks.

The JaMycal Hasty dream evaporated before our eyes with Jeff Wilson dominating the Patriots on the ground. Hasty was all but droppable until, in typical 49er fashions, Wilson went down with a high ankle sprain. Deebo Samuel also suffered an injury. Touches are available in San Francisco, and the team has been reluctant to feature Jerick McKinnon given his sub-50-percent Snap Share in each game since his Week 4 breakout. Hasty is the perfect long-shot roster stash with a clear path to opportunity in the weeks to come.

If healthy, Hyde is in line for 15-18 touches per game in a high-octane offense. He’s not worth all your FAAB due to his uncertain Week 8 status, but throw a bid on him just in case.

Regular readers of this piece should have Gus Edwards stashed already being that we’ve only been suggesting it for multiple weeks. With Mark Ingram battling a mid-to-high ankle sprain, Edwards needs to be stashed before the general fantasy community realizes that the Ravens are set to return from their bye.

Edwards was already earning higher-leverage opportunities than J.K. Dobbins. While there’s a chance the more explosive Dobbins earns a bigger post-bye role, Edwards is the safer bet and the higher priority until proven otherwise.

In his first action since Week 2, Sterling Shepard logged a season-high 78.8-percent Snap Share, while also recording season-highs with eight targets, three red zone targets, 59 receiving yards, 60 Air Yards and 17.9 (No. 16) fantasy points. He’s the de facto WR1 for the Giants and has low-end WR3 upside so long as he stays healthy. The offense overall is lackluster, but Shepard will maintain fantasy relevance in PPR formats.

Jalen Reagor is coming off IR and is eligible to return to practice. The first round pick flashed big play upside early in the season and there is plenty of opportunity in a depleted Eagles offense.

The NFC East is still up for grabs, so these games are meaningful. With Philly still in it and DeSean Jackson proving he is dust, Reagor is the perfect stash with WR1 upside down the stretch.

Nelson Agholor can no longer be ignored with four (No. 10) touchdowns this season and three straight weeks above 10.0 fantasy points. He appears to be the de facto WR1 in Las Vegas for the time being.

the nelson agholor fantasy funeral has been POSTPONED.

I wouldn’t go crazy here; the most probable reality is that Agholor has a better grasp of the offense than rookie Henry Ruggs, who has missed time with injury and may need a few weeks to win the job. Once he does, Agholor will return to fantasy irrelevancy. A spot start against the Browns presents solid plug-and-play value for those looking for a bye-week fill-in, or for those in the deepest of leagues.

T.Y. Hilton is dust, Parris Campbell is hurt, and Michael Pittman has yet to be activated from IR following a hamstring injury. Zach Pascal has been fine as the primary slot receiver, but he has not been the team’s top receiver. That honor goes to Marcus Johnson, whose role has increased in every week since being promoted from the practice squad.

With the Colts on bye in Week 7, Johnson’s 15.8-point performance from Week 6 may be forgotten. You shouldn’t have to bid more than a few dollars to acquire the player who has trended towards becoming the top passing game option in Indy.

Rashard Higgins and multiple fellow Browns pass catchers deserve consideration on the waiver wire following a season-ending ACL tear for Odell Beckham. His 22.3-percent (No. 21) Target Share with a 26.1-percent (No. 12) Red Zone Target Share will now be distributed among the rest of the team. The opportunity is further enhanced by the fact the Jarvis Landry has played through injury all season.

Landry will continue to be the featured wide receiver, but his role is unlikely to expand considerably for the sake of preservation. Higgins caught six passes for 110 yards following Beckham’s injury and has Flex appeal moving forward. His upcoming schedule: Raiders, Bye, Texans, and Jaguars, presents multiple soft defenses to exploit.

With no Michael Thomas and no Emmanuel Sanders, Tre’Quan Smith was in a prime position to establish himself as the next alpha up in the Saints’ wide receiver room. Yet, he was thoroughly outproduced by an undrafted free agent in Week 7. Granted we’ve been big fans of Marquez Callaway for months, but it’s more of an indictment of Smith at this point.

Any time an undrafted free agent earns his way into a decent regular season role in his rookie season, he warrants immediate addition in dynasty leagues and end-of-bench consideration in deeper redraft leagues. Thomas has already had a new hamstring complication in his attempt to return from an early-season high ankle sprain, and there’s no telling how long Sanders will remain on the COVID list. Callaway has gone from stash candidate to priority waiver add.

For most of the same reasons we recommend adding Rashard Higgins this week, we also suggest adding exciting rookie Donovan Peoples-Jones, who makes for a good consolation prize for those who can’t/don’t nab Higgins.

Based on the usage patterns from his NFL debut in Week 4, we suggested stashing Peoples-Jones in dynasty leagues. Given that Oakland, Cleveland’s Week 8 opponent, has allowed 77 points and six passing scores over the last two weeks, we give you permission to start him if needed.

Denzel Mims was given plenty of opportunity in his first game activated from injury. His 80-percent Snap Share and seven targets led the team.

Similar to Lamical Perine, Mims’ upside is capped by this offense, but a fine fantasy floor may be established. He is the final receiver we would target this week given that his role once Jamison Crowder returns is unknown.