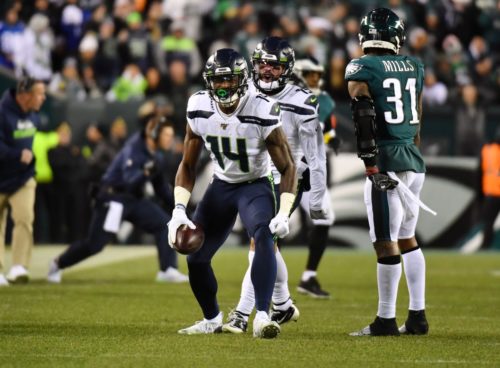 PlayerProfiler’s Player Popularity Index (PPI) tracks individual player profile page views over the past 30 days and ranks them accordingly. Each week, this article will highlight the five highest-ranked players and use our advanced stats and metrics to provide fantasy football insight on each. Following Sunday’s action and prior to Monday Night Football, the PPI pinpointed the following top-five trending players for Week 7:

D.K. Metcalf‘s mesmerizing, mind-melting chase down of Budda Baker transfixed Sunday Night Football viewers and lit Twitter ablaze. Metcalf’s otherworldly athleticism helped him reach 22.6 mph when he made the viral, touchdown-saving tackle per NextGen Stats. With perfect form in each stride, the NFL’s bionic man conjured images of a half-human, half-cyborg. At 6-3, 229-pounds he runs a 4.33 (99th-percentile among qualified wide receivers) 40-yard dash, which clocks in a tenth of a second faster than Tyreek Hill. He is the definition of freak athlete.

Metcalf’s unmatched combination of size and speed make him a deadly playmaker, but he’s usually burning defensive backs instead of running them down. His eye-popping display of determination and speed earned him the No. 1 ranking in the PPI for the allotted time period. He also comes in at No. 2 among wide receivers in PlayerProfiler’s dynasty rankings, but makes for a challenging acquisition. Coming off his worst outing of the season (2-23-0), he’ll look to rebound in a divisional showdown with San Francisco. Facing a stout 49ers defense and carrying the second-highest salary among receivers ($7,500), he’s an intriguing main slate GPP play for Week 8.

Dillon Down in the Dumps

With Aaron Jones sidelined by a calf injury, rookie A.J. Dillon looked poised for his largest workload of the season. It didn’t happen. Jamaal Williams dominated backfield touches 23-5 in a game the Packers led throughout. Dillon has yet to eclipse five carries in a game and doesn’t have a single target.

Green Bay’s second-round pick earned the right to be dropped in redraft leagues. However, he offers a buy-low in dynasty given that Williams becomes an unrestricted free agent after this season. Target impatient managers as potential trade partners when looking to acquire Dillon.

Key Metrics: The 6-0, 247-pound Boston College product produced a 34.8-percent (81st-percentile) College Dominator Rating, a sign of his lead back potential. That’s backed up by his build and athleticism: Dillon boasts 97th-percentile marks in Speed Score (117.3) and Burst Score (135.2), and sports a Body Mass Index in the 96th-percentile.

JaMycal Hasty landed in an ideal spot in San Francisco. The diminutive undrafted back from Baylor makes a perfect fit in coach Kyle Shanahan’s offense. Shanahan knows what he wants in a running back and liked what he saw in Hasty, who’s carving out a role. With Raheem Mostert (ankle) and Tevin Coleman on IR and Jeff Wilson carted off with an ankle injury, Hasty finds himself in prime territory. While the resurrected Jerick McKinnon figures to operate in the lead role, Hasty slots in as a capable change-of-pace back. It’s worth noting that Mostert, McKinnon and Wilson have each turned in 20-plus fantasy point performances this season.

Hasty has garnered nine carries in consecutive weeks, but needs to make a living in the passing game to gain fantasy relevance. He’s seen one target in each of the past two games, which won’t keep him afloat. He’s still worth an add in deeper redraft leagues given the overall success of the 49ers backfield. His dynasty outlook trends up too, and he shouldn’t be tough to acquire given his lack of a breakout game.

Key Metrics: Hasty caught 25 passes in his sophomore and senior seasons to record a 7.4-percent (50th-percentile) College Target Share. He also possesses explosiveness in the form of a 127.8 (87th-percentile) Burst Score.

With Tre’Quan Smith face-planting instead of breaking out in his third year, Marquez Callaway stealing his thunder makes perfect sense. Callaway made the most of his chances with Michael Thomas riding the bench, operating in the alpha role.

Before exiting Sunday’s game late with an ankle injury, Callaway proved an impactful player. The unheralded, undrafted rookie led the Saints in receiving (8-75-0) while earning a 78-percent Snap Share. He notched a team-high 10 targets and enjoyed 94-percent Route Participation mark while racking up 15.5 fantasy points. He’s also available on the dynasty wire, and with Smith trending down, consider dropping a sizeable chunk of remaining FAAB on him.

Key Metrics: The former Volunteer posted a 19.0 yards per reception mark in college, which ranks in the 90th-percentile. Callaway also boasts a young 19.4 (80th-percentile) Breakout Age.

Denzel Mims didn’t make a big splash in his NFL debut, but his mere presence on the field bodes well for New York’s long-term outlook. Mims caught 4-of-7 targets for 42 yards and no TDs, but he tied for the team league in targets and receptions and figures to earn the lion’s share of looks from Sam Darnold going forward. Regardless, his path to success remains tied to an inept coach and a quarterback who’s thrown more interceptions (six) than TDs (three) this season.

Until Adam Gase disappears, Mims’ ceiling remains capped, but that makes him even more of a screaming buy-low in dynasty leagues based on his prospect profile. The second-round pick from Baylor possesses elite workout metrics and college production to match. Need more convincing? His best comparable player on PlayerProfiler is Chris Godwin.

Key Metrics: Mims boasts a 42.3-percent (85th-percentile) College Dominator Rating, the fourth-best  markamong the 2020 receiving class. His Speed Score, Burst Score and Catch Radius all rank in the 95th-percentile or above.