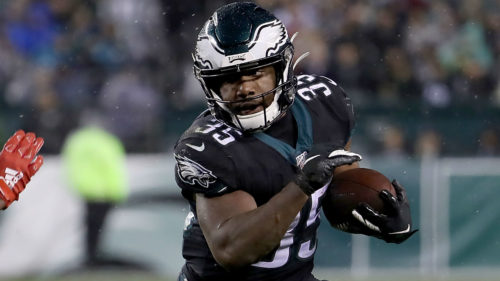 The NFL has lasted into it’s seventh week, and with that, bye weeks, injuries, and questionable player usage have become abundant. In these trying times of roster uncertainty, PlayerProfiler’s advanced stats and metrics are here to help fantasy players navigate the waiver wire with precision.

Boston Scott is walking into at least one week of pseudo-starter responsibilities. He’s the next man up, and a short week against the New York Giants ensures that Miles Sanders will sit and that scoring opportunity will be abundant.

Doug Pederson has a history of using a committee when no true workhorse is available to carry the load. Still, one week RB2 upside makes Scott a worthy Flex play for those looking to fill bye weeks.

J.D. McKissic has forced himself onto the fantasy radar with at least six receptions in each game since Dwayne Haskins was relinquished to the bench. Kyle Allen is a checkdown machine that helped fuel Christian McCaffrey‘s historic 2019 run. McKissic is AFC James White with PPR flex value completely supported by targets. 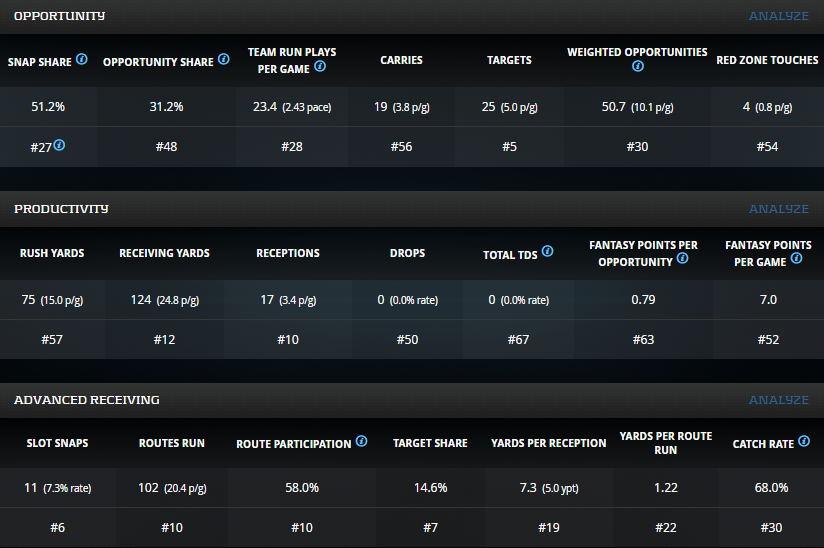 McKissic has a near 50.0-percent Snap Share in every game this season and is running 20-plus routes per game. He has 25 (No. 5 among qualified running backs) targets and a 14.6-percent (No. 7) Target Share. He’s a high-floor PPR Flex option perfect for bye week fill-ins.

Starting any Jet not named Jamison Crowder is a recipe for disaster. Lamical Perine is a desperation play for owners needy for running back help. At best, he can produce RB3 numbers in an otherwise lackluster role alongside Frank Gore. Perine received seven targets and three carries with a 58-percent Snap Share in Week 6.

Adam Gase continued to say he plans on giving Perine more touches, if that is worth anything. Honestly, take him if you’re desperate or if he is free. Don’t drop anyone usable for him. If you have him and can trade him, do it. The upcoming schedule is Buffalo, Kansas City, New England, and a bye week. There is little to like here.

JaMycal Hasty is another long shot for a desperate team. Raheem Mostert is injured again. Jerick McKinnon will see the lion’s share of the high value touches from this backfield, but Kyle Shanahan typically utilizes multiple backs. Jeff Wilson has a history of goal line work when needed, but Hasty had some run in Week 6 and Wilson is dealing with minor injury.

jamycal hasty’s 20.5% snap share last night was not super-impressive, but the context is encouraging.

If Tevin Coleman stays on IR and something happens to McKinnon, then the sky is the limit for Hasty.

The Titans are flying high in 2020 and Jeremy McNichols is the primary backup to Derrick Henry. He is carving out a nice change-of-pace role and proving that he has some juice on this offense.

don’t look now, but guess who was on the field a LOT in a competitive game this sunday?

McNichols is a solid stash who would quickly ascend if Henry misses time.

Henry Ruggs was featured in this article last week and should be rostered at this point. He is just over 50-percent owned and should be added if available in your league. Ruggs’ role in 2020 is yet to be seen, but he is healthy and the ceiling is certainly high.

Travis Fulgham is a featured weapon for Carson Wentz with few options going in to Week 7. Both tight ends, both starting receivers, and the starting running back are all banged up for the time being.

The Eagles are throwing the ball at the fourth-highest rate in the NFL. Wentz’ 39.0 (No. 6) Attempts per Game have to go somewhere and Fulgham has produced for well over three weeks. His receiving line of 26-284-3 is good enough to be the PPR WR35 on the season.

DeSean Jackson is nearing a comeback. Should he return in either Week 7 or Week 8, he immediately slots in as a high-upside Flex play. He is high-risk, but also has the potential to be the highest fantasy scorer in any given week. As discussed with Travis Fulgham, there is plenty of opportunity with the Eagles.

Trey Burton has apparently emerged as the leading tight end on the Colts. He has earned at least five targets in each of the last three weeks and is averaging a 50-percent Snap Share. He’s a touchdown-dependent tight end streamer in a low overall passing volume offense. The Colts currently rank No. 28 in Team Pass Plays per Game. You can do better than Burton.

Dallas Goedert is flirting with a return to the field sooner rather than later. He was placed on three-week IR three weeks ago with an ankle injury. 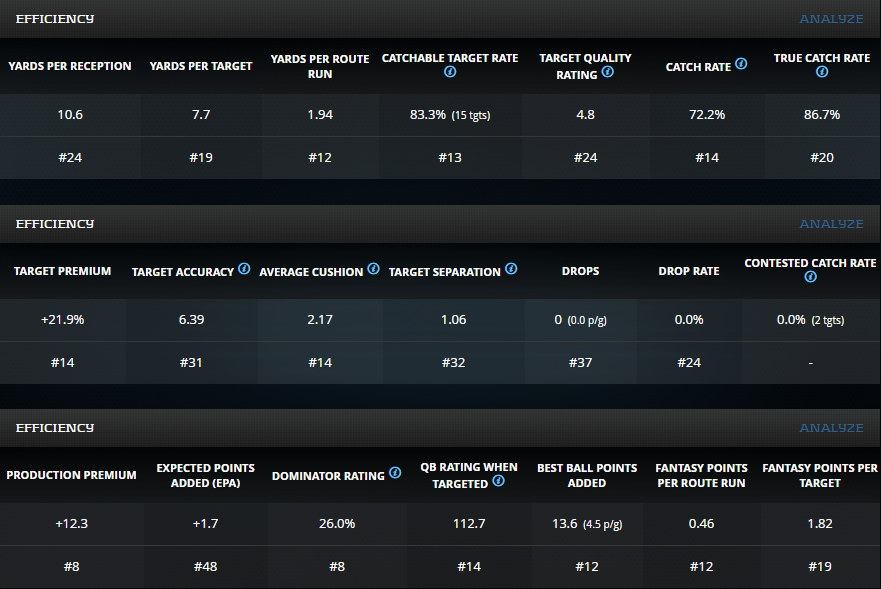 If he returns, we may finally get to see a true TE1 version of Goedert with Zach Ertz missing time. If he sits, Richard Rodgers is an upside tight end streamer in the meantime.

Anthony Firkser erupted after Jonnu Smith went down with an ankle injury. Monitor Smith’s injury as it appears to be minor. If Smith sits, Firsker is a plug-and-play TE1.