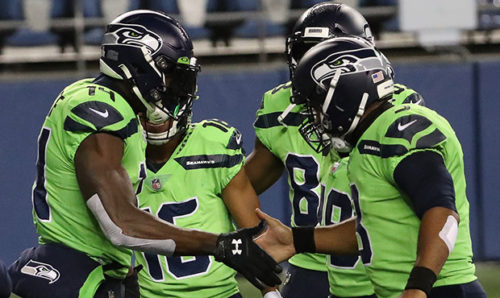 Welcome back to this week’s installment of the Quarterback–Wide Receiver Stacks for daily fantasy football. We are into Week 10 of this crazy 2020 season. As always, this article serves to provide analytically driven recommendations for quarterbacks and wide receivers on the same NFL team to combine in a stack for daily fantasy football contests. We want to leverage the correlation between the scoring of a QB and his receivers to double dip on big plays, creating high-upside lineups in the process. Our guide in this pursuit is the advanced stats and metrics found for free at PlayerProfiler.

Last week featured what was likely our most successful set of quarterback plays to date.

Josh Allen led the way, posting 39 DraftKings points in a dominant performance against the Seahawks. His teammate Stefon Diggs 3x’ed as well, hitting 23.8 points on the day. Allen’s ownership was above 10-percent, but he trailed behind Russell Wilson and Justin Herbert. The extra 10-plus points from Allen was a big differentiator.

Teddy Bridgewater and Robby Anderson made up the second stack. At less than 1-percent ownership, Teddy 5x’ed this week, going over 30 fantasy points. He was electric in a near win against the Kansas City Chiefs. Anderson had a fine day posting 15.3 points, once again racking up yards but no touchdowns.

We also included a budget stack last week with Tua Tagovailoa getting his second start. In a thrilling shootout against the Cardinals, Tua delivered over 21 DK points at $5.5K and 1-percent ownership. DeVante Parker led the team in targets, receptions and yards. But without a touchdown, he posted a middling 12.4 fantasy points.

Despite Patrick Mahomes and Lamar Jackson not being included in the main slate, this week presents multiple possibilities to choose from for top-end QB production. Kyler Murray and Josh Allen ($8K and $7.5K respectively) square off in a shootout that should feature high ownership on both sides. Jared Goff and the Rams get a big boost going against the swiss cheese Seattle defense. Aaron Rodgers is priced at QB2 with his only non-Hail Mary stack option, Davante Adams, tied for the most expensive player on the slate. All are viable options, but ones we will ignore due to the combination of price and expected ownership.

Sifting through the high-end stacking options this week, there is one that may get lost based on matchup. Russell Wilson and the Seahawks face the intimidating Los Angeles Rams defense. This is a team that has not been kind to opposing passing games, with the likes of Aaron Donald and Jalen Ramsey pressuring QBs and snuffing out WRs.

Seattle isn’t just another opponent though. Wilson’s combination of volume and efficiency make him virtually matchup proof. His 37.1 Attempts per Game ranks No. 11 among qualified quarterbacks, while his 2,541 Passing Yards, 1,563 Completed Air Yards, 21 Money Throws, and 28 Passing TDs are all top 5 marks. Despite that volume, he’s as efficient as ever. Pick your favorite measure: his Yards per Attempt, Accuracy Rating, Fantasy Points per Dropback, True Passer Rating, and Production Premium all rank in the top 3.

D.K. Metcalf has been the leading beneficiary of this year’s increase in passing volume. He’s seeing 126.4 (No. 1) Air Yards per Game and 2.43 (No. 2) Deep Targets per Game, which he’s turned into 97.1 (No. 4) Receiving Yards per Game and seven (No. 2) total TDs. He’s consistently beating top corners such as Stephon Gilmore, Xavien Howard, Patrick Peterson, and Tre’Davious White.

In a game with the second highest projected total, ignore the difficult on-paper defensive matchup and get exposure to massive upside at what’s expected to be unusually low ownership from the Seahawks offense.

Deshaun Watson looks like a new QB since coach Bill O’Brien was let go. In the four weeks since Romeo Crennel has taken over, Watson’s Air Yards per Game have jumped from 275 to 300, and his Yards per Attempt have gone from 8.6 to 9.0. That aggressiveness has paid off with Watson finishing as a top 10 fantasy QB each week after failing to do so even once in the first four.

This week, Houston goes to Cleveland as 3.5-point underdogs in a game with the third-highest point total. The volume should be there again. Although, one thing to watch as we get closer to Sunday is the weather in Cleveland. It is a mid-November game in the Midwest.

Will Fuller has stayed healthy this year and accordingly has strung together a stretch of excellent performances for fantasy gamers that believed in him. That has shielded Brandin Cooks‘ reemergence. In the same split as Watson, Cooks has posted double digit totals in each of the last four weeks, featuring two top six performances as well. That consistent floor with week-winning upside is exactly what we’re looking for in daily fantasy football. Despite that, his price is stuck below $6K. Jam in Fuller if you have the cash, stack them both for the game stack if you want, but the Watson-Cooks stack provides maximum upside for the dollar while leaving you with enough flexibility for the rest of the lineup.

We’re going back to the budget stack well this week. Drew Lock has been better since returning from injury. Sure, it’s been as a garbage time hero the last couple weeks, but that should continue. Denver is currently a 5.5-point underdog to the Las Vegas Raiders. With that projected negative Game Script and a healthy set of receivers, Lock should see enough volume to make him a viable play at $5.5K on DraftKings.

Jerry Jeudy has arrived. It took some time as a rookie, but as the Podfather showed earlier this week, Jeudy is now commanding an alpha-level Target Share and alpha-level Air Yards. He’s delivering on that opportunity as well. Yet DraftKings seems to think it’s still Week 7 by pricing him at $5.6K. Capitalize while you can.