D.J. Moore is coming off a disappointing Week 8 performance against a highly exploitable Falcons secondary where he failed to crest double digits fantasy points. However, those disappointed with him this season need to keep the faith. The last time he appeared on this list, he exploded for 25.3 fantasy points, finishing as the WR6 in Week 7. Moore should see penalty of opportunity in a negative Game Script against the Kansas City Chiefs.

Like D.J. Moore, Terry McLaurin also last made this list in Week 7. However, unlike Moore, McLaurin finished inside the top 24 wide receivers in weekly fantasy points, not inside the top 12. He will look correct this in a week where he is matched up against the Giants, the same defense he saw in Week 7. He leads the league in Air Yards Share and is set to smash soon. While a tough matchup against James Bradberry may scare off some DFS players, McLaurin is seeing more than enough opportunity to be considered matchup proof.

Brandin Cooks just qualifies for the salary threshold for this list, and his Week 9 price has to be some type of error. 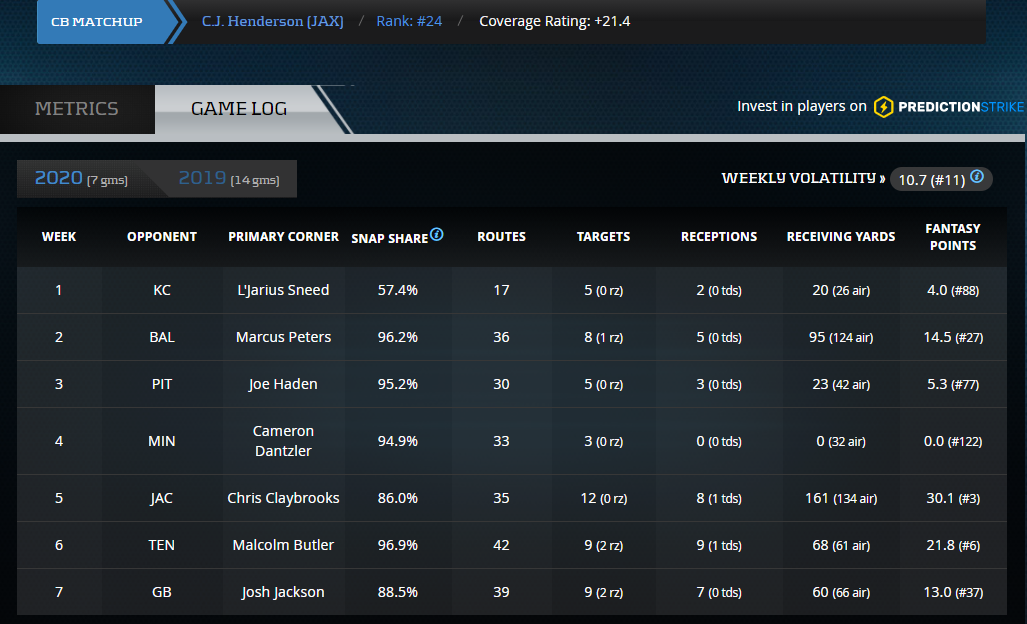 Cooks has averaged over 20.0 Fantasy Points per Game over his last three. He should be a mainstay in both cash and tournament lineups.

Jalen Guyton and Mike Williams continue to vacillate as the Chargers deep target receiver who booms. Williams went off last week, scoring 21.0 fantasy points. The week before that, it was Guyton who scored 16.4 fantasy points. 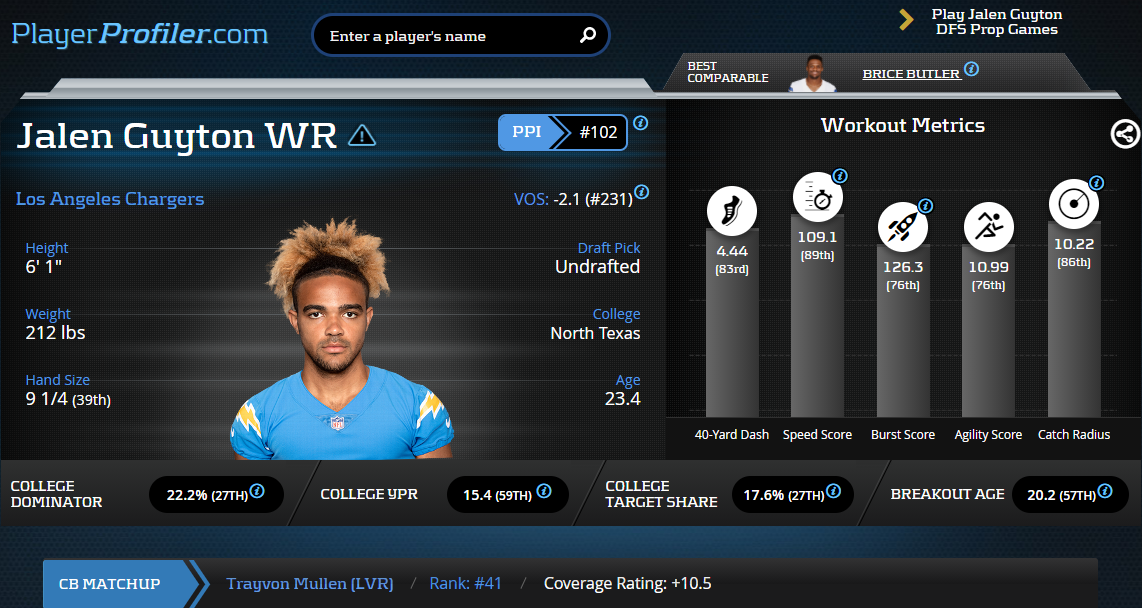 Guyton is essentially a cheaper Williams with a lower ceiling because he sees fewer targets. Averaging 15.4 (No. 1 among qualified wide receivers) Yards per Target, Guyton can boom any week.

It is uncertain as to how the Jaguars quarterback change will effect Keelan Cole and others in the passing attack. Regardless, Cole has been the best receiver in Jacksonville. He boasts a 22.8 (No. 12) Production Premium, and a 30.6-percent (No. 16) Target Premium.

With the Jags looking to make changes after the bye, a smart change would be to get the ball in their most efficient receiver’s hands. At $4,000, Cole is a intriguing dart throw.

Tim Patrick missed last week with a quad injury, but is set to return against Atlanta’s porous secondary. Prior to his injury, Patrick was heavily involved in the Broncos passing attack, seeing 194 Air Yards in Week 6 against the Patriots. While he may not see that type of opportunity against the Falcons, his $4,900 price point makes him a solid DFS play.

As previously mentioned, we are not sure how the quarterback change will affect targets in Jacksonville. However, some speculate that the Jaguars will throw downfield more. This would drastically effect D.J. Chark.

After breaking out with a Target Share above 20.0-percent in 2019, Chark has failed to see as many opportunities in the Jaguars passing attack thus far this season, only drawing a 19.3-percent (No. 38) Target Share to this point. A quarterback change may be what makes him a more reliable play.

A change to Tua Tagovailoa at quarterback was not kind to Preston Williams in Week 8. He finished with only 3.5 fantasy points against the Rams. However, he did lead all Dolphins with 53 Air Yards on the week. Hopefully with some more time to foster chemistry, Tua and Williams can realize some of those Air Yards against the Cardinals. Priced at only $4,100, Williams is worth taking that chance.

As mentioned previously, Mike Williams and Jalen Guyton are trading off boom weeks as the Chargers’ deep ball receiver. Last week, it was Williams who caught five balls for 99 yards and a touchdown. 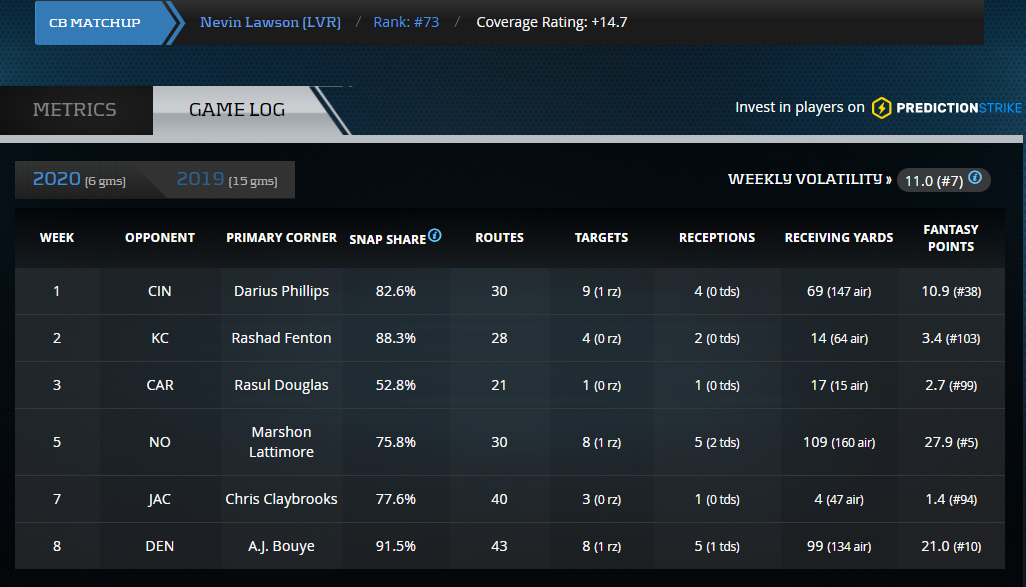 Williams carries the higher ceiling among the two receivers as he continues to out target Guyton in the passing game by a wide margin. The higher floor may not be worth an extra $2,000 on DraftKings. However, he can very easily finish at the top of his position in scoring.

If I owned a helicopter, I would write something like Jerry Jeudy: 150 yards and 2 TDs in Week 9. Alas, I have no helicopter, but this may be the breakout week. Jeudy is coming off a week where he amassed 162 Air Yards and 10 targets. He is set to face a Falcons defense that is highly exploitable. Entering the week with 340 Unrealized Air Yards, the stars are aligning.

Darnell Mooney finally realized some Air Yards last week in route to a 17.9 fantasy point finish. For the third consecutive week, he lead the Bears in Air Yards.

Set to face off against Tennessee’s exploitable pass defense in Week 9, Mooney will look to build on his Week 8 performance. Averaging 15.4 (No. 11) Yards per Target, all it takes is one completed pass for him pay off in DFS.

Darius Slayton appears to have taken a back seat to Sterling Shepard in the Giants passing game. However, he still led the Giants with 122 Air Yards last week. 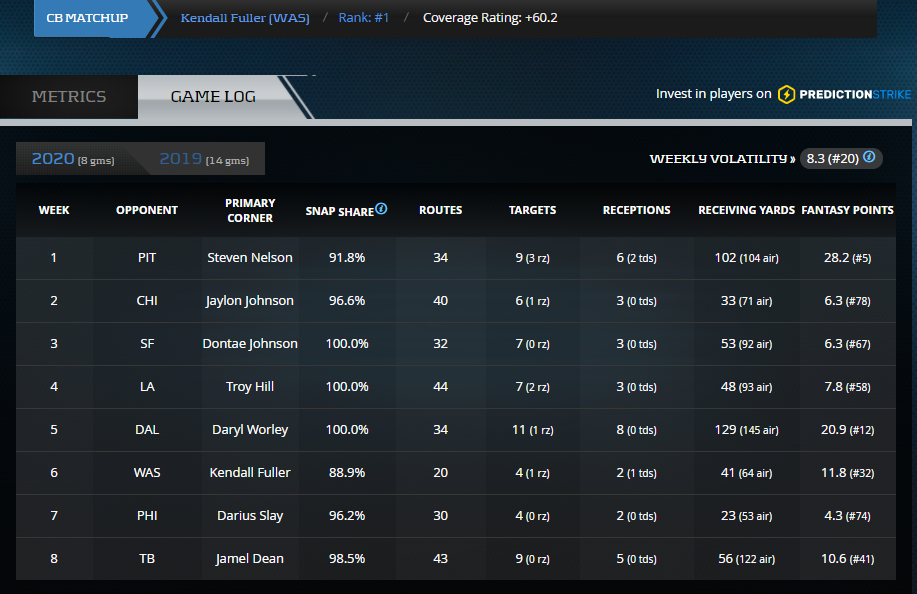 Slayton previously scored 11.8 fantasy points against Washington in Week 6. With Shepard back to divert the attention of Washington’s defense, he should be able to realize some more Air Yards this week.