As the NFL season nears the quarter mark, the chaos of 2020 shows no signs of slowing down. Over this past week, the league faced its first major challenges related to COVD-19. In Tennessee, several players and staff tested positive for the virus, leading to the postponing of Sunday’s Titans/Steelers game. The Patriots/Chiefs game is also due to be postponed Saturday after Cam Newton tested positive. This likely won’t be the last we hear from COVD this season, either.

The postponements aren’t ideal, but they are essentially early (and unexpected) byes. Those players will be available next week, friends (fingers crossed). Though the focus has been on COVID, and rightly so, the wounded continue to pile up. The list of injuries is shorter than previous weeks, but there are several key players set to miss and others whose futures are cloudy. It’s not all bad, though. There are some key players returning (cough… George Kittle). Into The Infirmary!

Analysis: There was but one noteworthy name added to injured reserve this week, and that’s Chicago’s Cohen. It’s unfortunate to see him go down just as the offense started picking up under new starting quarterback Nick Foles. This should mean a bump up for David Montgomery. With Ryan Nall as the lone depth at the position, the Bears promoted Artavis Pierce from the practice squad. The undrafted rookie’s 4.52 (72nd-percentile among qualified running backs) 40-yard Dash and 99.7 (62nd-percentile) Speed Score make him worth monitoring after Cohen’s departure.

Analysis: Plenty of teams are suffering multiple injuries, a few nearly decimated at one position. The Eagles, for example, continue to play thin at wide receiver and the injury to Goedert exacerbates the situation, given he’s out multiple weeks. Greg Ward needs to be in lineups this Sunday, if it wasn’t already obvious. However, don’t forget about Philadelphia’s two rookie wide receivers, John Hightower and Quez Watkins, the latter of which is set to return from I.R.

The same issue arose in Las Vegas, where the Raiders find themselves lacking playmakers at the receiver position. Sunday is shaping up to be a Hunter Renfrow kind of day, it appears. Good stuff. In New Orleans, Thomas remains out while Cook joins him on the sidelines, making rookie Adam Trautman an interesting flyer for the week. As for Tom Brady and the Bucs, it’s another week without Godwin, and now Fournette will miss, as well. Justin Watson time?

Mostert remains out for San Francisco, which means another great opportunity for Jerick McKinnon.

The Lazard injury is big time; he’s out indefinitely and Green Bay’s depth at the position is as thin as paper. Marquez Valdes-Scantling will pick up the slack, and should Davante Adams miss Monday Night’s game, he’ll serve as the team’s top receiver, making him a must-play. Unlike the Packers, the Colts do have some options to fill vacancies left by Pittman and Parris Campbell. Yes, Zach Pascal is there, but so is another intriguing name.

Ashton Dulin has a legit player profile and needs to be stashed in deep leagues.

Analysis: Even if either of these two players can go, this isn’t the time to start them. The likelihood they miss their respective games simply reinforces the play of their teammates. Both Hunter Renfrow and Greg Ward have the chance to led their teams in receiving this week, much as they did in Week 3 for their respective sqauds

Analysis: Out in the desert, Hopkins didn’t practice all week, while Kirk got in limited work Wednesday through Friday. Should one of them (or both) have to sit, that would lead to plenty of opportunity for Andy Isabella and Larry Fitzgerald. Starting tight end Dan Arnold may also garner some looks.

In Atlanta, all three starting wideouts are hobbled. Indications from Saturday’s practice point to all three wideouts playing, but being a Monday Night game makes it tricky. Throw them in a Flex spot and have a replacement just in case.

Adams practiced in limited fashion on Saturday, another big question mark for Monday Night. In addition to the Allen Lazard injury, this may leave quarterback Aaron Rodgers with a cast of wideouts led by Marquez Valdes-Scantling. Robert Tonyan anyone? He’s caught a touchdown each of the last two weeks, garnering five targets for five receptions including the TD in Adams’ absence versus the Saints. It appears he’s earned some semblance of Rodgers’ trust, which could be huge come Monday Night. 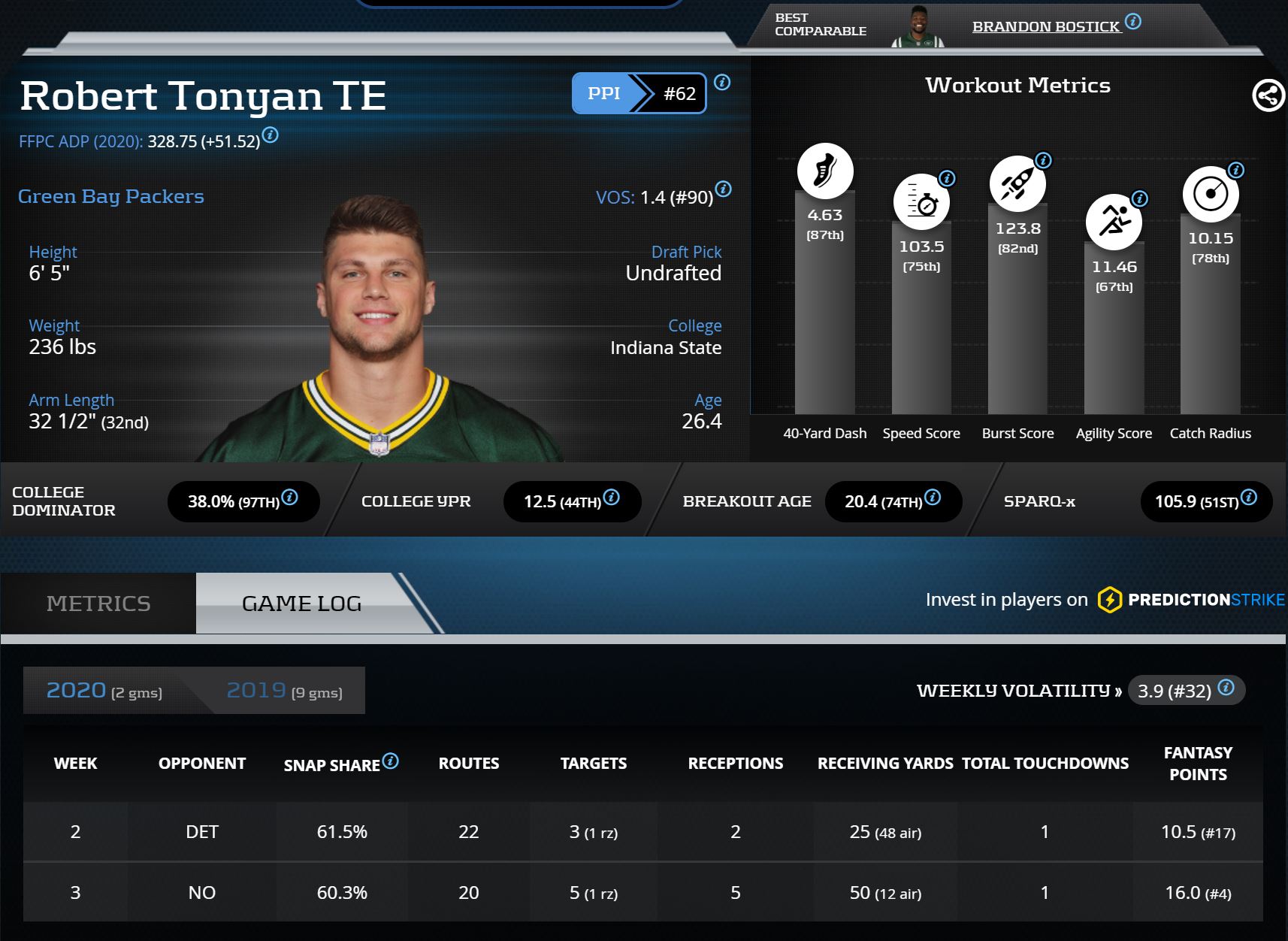 The Seahawks are banged up at running back, with both Carson and Hyde questionable for Sunday’s game. There is a sense of optimism for both players going, but Travis Homer is in play this week should one of the two miss, while rookie DeeJay Dallas is worth keeping an eye on.

This is shaping up to be one hell of a week. In addition to the usual carousel of injuries, fantasy managers are also dealing with unexpected bye weeks for several key players. This changes the fantasy landscape drastically. The injuries do provide opportunity for others, however, and this is where fantasy managers must strike. Travis Homer and Robert Tonyan are players that could pay dividends and end up being week-winners.

In addition, there are some players returning from injured reserve (the Damien Harris hype will have to wait, however). Deebo Samuel will make his season debut against the struggling Eagles, and the 49ers need the help at pass catcher. They’ll certainly get it this week in the form of Samuel and George Kittle.

It’s a rough week across the board for fantasy footballers, but it’s more than manageable. Good luck to all, and check back next week for more injury news in, The Infirmary.