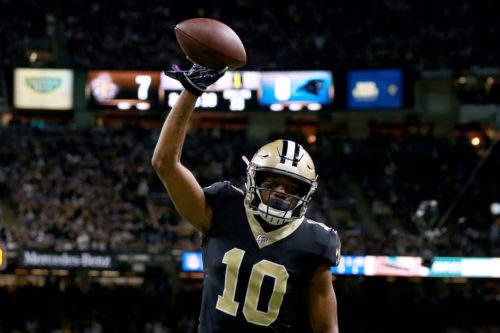 Maximizing your fantasy points per salary dollar is the key to cashing in DFS. If you want to afford the best cash plays on the slate, dumpster diving for underpriced value plays is the way to go. With multiple injuries already shaking up some projected workloads, there is plenty of value on the DFS main slate. Here are the best DFS Flex values for Week 4 based on PlayerProfiler’s advanced stats, metrics, and analytics.

Myles Gaskin is a no-brainer DFS flex value. He has sustained a consistent pass-catching role for the Dolphins, averaging five receptions over the first three weeks. Last Thursday, he completely took over the backfield with 22 carries, meaning he’s operating as the clear cut bellcow for Miami.

The game environment couldn’t be better for Gaskin this week. This matchup features the No. 23 and No. 32-ranked defenses in terms of Defensive DVOA, and Seattle opponents average over 75 plays per game. Gaskin has posted double-digit fantasy points in all three games this season without finding the end zone. Miami will be moving the ball often in this matchup, meaning he’ll have multiple red zone chances to hit paydirt. He has a 10-point floor with a 20-plus point ceiling and is severely underpriced on both sites.

With Chris Godwin on the mend, Scott Miller figures to slide into a full-time slot role for the Buccaneers. The Bowling Green product has already had a consistent deep threat role, with his 16.1 Average Target Distance ranking No. 12 among qualified WRs. He hasn’t handed in much fantasy production given his volatile targets, but he saw a massive 135 Air Yards last week. That deep opportunity coupled with highly valuable slot targets makes Miller a great option.

Right on the money. Arm still as strong as ever.pic.twitter.com/VoG6BeWZht

On top of his expanded opportunity, Miller is also extremely athletic. While he stands just 5-9, he runs a 4.44 (83rd-percentile) 40-yard dash and is nimble in space with his 10.99 (76th-percentile) Agility Score.

The only downside to Miller this week is his matchup. With Casey Hayward on Mike Evans, he’ll be up against Michael Davis on the perimeter and Desmond King in the slot. The entire Chargers secondary has been stingy all season, limiting studs such as D.J. Moore, A.J. Green, and Tyreek Hill outside of his one deep bomb. This game also has the lowest total on the slate at 42.5 points, so Miller sets up as a low-owned tournament option. He has the athleticism and role to produce in this spot, but his range of outcomes is incredibly wide.

If you’re looking for a high-floor WR value, Hunter Renfrow is the best bet. On the surface, he’s the epitome of a “three condom play” given his minimal athleticism, with a 79.5 (10th-percentile) Speed Score and shallow role, with a 10.2 (No. 56) Average Target Distance mark. Luckily, that doesn’t matter for cash lineups.

The Raiders are down to Zay Jones and Nelson Agholor as perimeter receivers. That means Renfrow is a lock for at least a 20-percent Target Share as the only reliable receiving option apart from Darren Waller. He’s averaged 17.05 fantasy points over the last two seasons when seeing a 20-percent share.

Renfrow is also in a soft slot matchup against the Bills, as Tre’Davious White doesn’t shadow inside. Buffalo has notably been burned by Cooper Kupp, Mike Gesicki, and Jamison Crowder in the slot through three weeks. With how efficient the Bills offense has been, the Raiders will be forced to pass in this matchup. Renfrow has a high floor and a sneaky ceiling this week.

The Saints rival the Eagles as the most injured team in the NFL. They are down Michael Thomas, Jared Cook, Marshon Lattimore, Janoris Jenkins, and more. Without the top two corners in New Orleans, this matchup with the Lions should be a shootout. That will benefit Tre’Quan Smith the most as the de facto alpha receiving option for New Orleans.

In comparison, Sanders played 77% of snaps in Week 4

Smith has operated fine in that alpha role thus far. In Week 2, he hauled in five of his seven targets for 86 yards. He took a step back in Week 3, but still paced Emmanuel Sanders with six targets in the contest. At 6-2, 210-pounds, Smith is the closest thing to a big-bodied WR with Cook out this week. His matchup with the Lions is also incredibly soft. Rookie DB Jeff Okudah has been absolute dust through three weeks ranking as No. 101 on PlayerProfiler’s cornerback rankings. Detroit ranks No. 27 in Defensive DVOA, so New Orleans will have ease moving the ball even with Drew Brees’ deteriorating arm. This matchup is tied for the second-highest total on the slate at 54.5 points, so stacking this game looks viable for tournaments given these affordable prices.

Speaking of affordable prices, Saints rookie TE Adam Trautman checks in at the stone-minimum for a player on DraftKings this week. The third-rounder from Dayton figures to get his first NFL start in Jared Cook‘s absence. He should slide right into the same role as a big-bodied move tight end having already played out of the slot on 35.9-percent of his snaps this season.

That role makes sense given his player profile. With a 96.8 (53rd-percentile) Speed Score, Trautman has more than enough top-end juice to run by linebackers. What is really impressive is his 11.05 (95th-percentile) Agility Score and his 10.18 (81st-percentile) Catch Radius. Trautman’s size-adjusted athleticism in short areas already manifested itself into production in his college days, where he hauled in 70 balls for 916 yards and 14 touchdowns as a senior. In the context of the Dayton offense, that was good for a 38.1 percent (97th-percentile) College Dominator Rating.

Trautman clearly has the talent and will now get the opportunity in an offense commanded by the most accurate QB of all time with a creative offensive play-caller. The game environment sets up well for this min-priced TE and he offers some much-needed salary relief for cash game lineups.