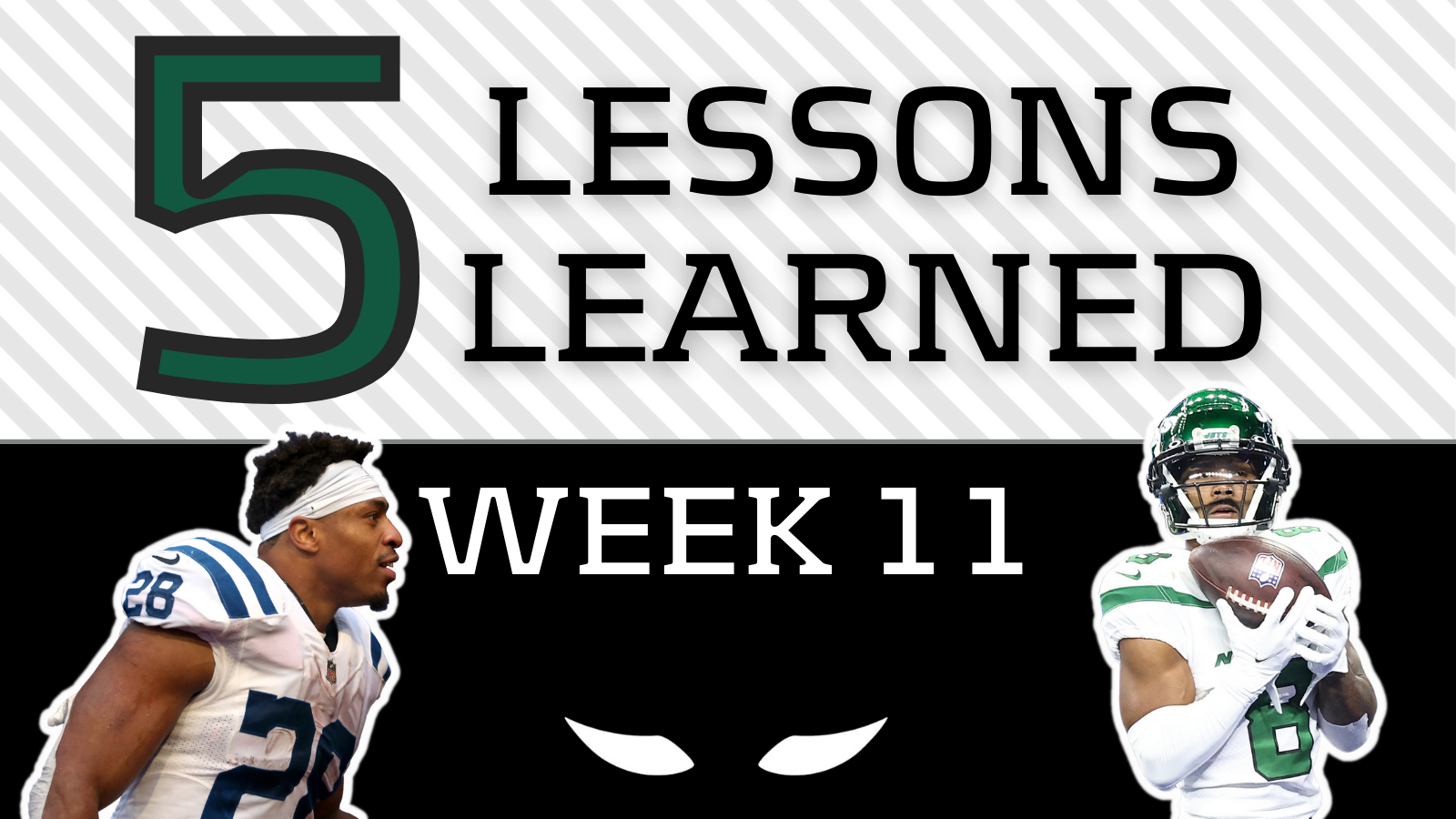 1) Thursday Breakdown – Patriots Are a Force!

Teams can’t pass against the 2021 New England Patriots, who defense, according to ProFootballReference, is No. 7 or better in Air Yards Per Attempt, Interception Rate, and Sack Percentage. Teams can’t run against them either, as their D sits No. 9 in Allowed Rushing Yards Per Attempt and No. 2 in Rushing TDs allowed. And they give up the third-fwwest total yards per drive.

So you can’t move the ball against New England and they’re going to take it away from you, too.

In Bill’s and Tom’s Super Bowl seasons, while those teams were blessed with the GOAT Tom Brady, they also reflected Bill Belichick’s passion – defense. During those seasons, the Pats ranked, on average, No. 4 in Points Against and No. 7 in Defensive Turnover Percentage.

Through Week 11 of 2021, the Pats are No. 2 in Points Against and No. 3 in Defensive Turnover Percentage. They’ve got a conservative quarterback completing over 70-percent of his passes with a decent touchdown to interception ratio. And their offense sits No. 6 in Points For. Go look up the 2001 New England stats to see if that doesn’t look familiar.

This is all great news for long-suffering New England fans who haven’t had a Super Bowl contender in almost three years.

In their last five games, the Pats have turned it up to 11, outscoring teams by an average of 35-10 and out-gaining them by 130 yards per contest. And they’ve won the turnover battle 13-4. Sure, it has been awful competition but you can only play the schedule you’re given.

In Week 11, as has always been Bill’s modus operandi, the Patriots’ defense shut down the opponent’s top weapon, this time Kyle Pitts. In their only challenge in the last five weeks, they pressured Justin Herbert. sacking him three times and picking him off twice.

All else being equal, avoid starting guys against the Pats. Of course, you’re not going to sit Josh Allen, Stefon Diggs, or future Hall of Famer Jonathan Taylor, but Ryan Tannehill, for example, could get his lunch handed to him next week. And, if you make it to Fantasy Championship Week 17, whatever you do, don’t even think about starting a Jaguar!

2) Elijah Walks Among Us!

If you think back to training camp, a different Elijah was the talk of the NFL town.

It was the Jets’ Elijah Moore, with his 4.40 (92nd-percentile among qualified wide receivers) 40-Yard Dash, 10.67 (98th-percentile) Agility Score, and one of the most impressive college metrics profiles you’ll find; a 41.9-percent (85th-percentile) College Dominator Rating, 36.7-percent (98th-percentile) College Target Share, 19.4 (82nd-percentile) Breakout Age, and an 84.3-percent Catch Rate in 2020 at receiver factory Ole Miss. This spring, Moore was repeatedly mentioned as the best player in camp. Former Ole Miss teammate A.J. Brown even said he’d bet all his game checks on Moore winning Rookie of the Year (Not sure he actually did that but it’s quite the high praise nonetheless!)

After a quad injury knocked Elijah out of the preseason, he was quiet much of the first half of 2021. Starting in Week 8 though, things changed quickly.

In Week 9, just his fifth career start with at least a 40-percent Snap Share, Moore caught seven of eight passes for 84 yards and two scores, finishing as the league’s overall No. 1 WR. He scored again in Week 10 against Buffalo, finishing as the WR25. This week Joe Flacco, sitting in for Mike White who had been sitting in for Zach Wilson who should have been sitting behind someone else, recognized his talent, targeting Moore 11 times. He ended up with eight grabs for 141 yards and a score.

Now that we’re more than half-way through the 2021 season, how is Moore stacking up to his 2021 NFL Draft classmates?

The point here isn’t to say that Moore is the best of the bunch, but it is to say he now fits in nicely with this group and must be an every-week starter the rest of the way.

(Side Note/Tangent: How in the world did the 2018 Ole Miss Rebels manage to post a losing record with a wide receiver corps featuring Moore, Brown & D.J. Metcalf??)

Start Elijah Moore every week. It doesn’t matter who’s at QB or if they lose out. He’s the Jets’ best receiver and will someday be their first Pro Bowl receiver this century.

In Week 6’s Lessons Learned, I noted what PlayerProfiler has been saying all along – that Jonathan Taylor is the No. 1 Dynasty Running Back.

You might ask how there could possibly be lessons to be learned about Taylor after today’s Week 11. Well, there are plenty.

For those of you that watched King Jonathan‘s performance this week, no doubt you enjoyed it. This was a legendary game. It is not hyperbole to say this was one of the greatest single-game performances by an NFL running back in league history.

Taylor put up 185 rushing yards, over 200 total yards, and five touchdowns against the Buffalo Bills, who came into the game No. 3 in Rushing Yards per Attempt against. Only three backs in history have posted six touchdowns in a game. Taylor gained more yards today than any of them.

And it was not just Week 11. He’s now posted eight consecutive games with over 100 yards and a rushing score, tying the all-time record held by LaDainian Tomlinson and Lydell Mitchell. Taylor leads the league in rushing yards, rushing touchdowns, Yards Created, Juke Rate, and Goal Line Carries. He’s not quite as good in Yards Created Per Touch, Breakaway Runs or Dominator Rating, though… he’s No. 2 in those categories.

I just hope the Colts don’t overuse him. Records aside, I didn’t like today’s Derrick Henry-esque workload in a game won by 26 points. Still only 22 years old, barring injury, please consider this his first official Hall of Fame vote.

Enjoy watching this generation’s most complete, exciting running back. I hope you followed PlayerProfiler and Breakout Finder’s advice and selected Jonathan Taylor at 1.01 in last year’s dynasty rookie drafts. If you followed the herd and went Clyde Edwards-Helaire instead, don’t say we didn’t warn you!

4) Jalen Hurts is the Modern NFL

You’d think a 67.4-percent (No. 29) True Completion Rate, 72.0 (No. 26) True Passer Rating, and throwing nearly the most Interceptable Passes in the league would be a disaster of a quarterback season. Not in 2021. No, those numbers belong to an every-week starter.

You’d think 13-for-24 for 147 yards and no scores would be a disaster of a fantasy week. Not in 2021. No (and especially not in Week 11), your quarterback can still get you the third-highest weekly score and over 30 fantasy points.

The numbers above belong to Jalen Hurts.

Hurts sits as No. 31 in Passing Yards per Game but is No. 7 in Fantasy Points per Game. As long as he keeps the job, and the Eagles are winning so he will keep it, he’s an every-week starter. Other quarterbacks may be better throwers (e.g., Matthew Stafford or Derek Carr) but Hurts beats them in fantasy every time.

In modern fantasy football, as long as they start, QBs don’t have to throw all that well. Doing so is a bonus. As long as your QB is the confirmed starter and can run, you win. If he does throw well, great. If he’s struggles a bit, he’ll run so you win anyway. And he’ll vulture rushing scores. QB rushing is the ultimate fantasy football insurance policy. It gives you both high-floor and high-ceiling.

This year’s No. 1 fantasy QB, Josh Allen, sits at only No. 19 in True Completion Percentage and No. 18 in Catchable Pass Rate. But that doesn’t matter. He’s No. 4 in Carries per Game and No. 3 in Red Zone Carries per Game.

If Jalen Hurts is on your roster, you already know to start him every week. Next year though, be sure to pay up for the high-floor, high-ceiling Konami QBs that define the modern NFL and modern fantasy game.

5) Tony Pollard is Dallas’ Best Back

In Week 11, as has happened in every game this season, Ezekiel Elliott out-carried and out-targeted backfield mate Tony Pollard.

But as has also often been the case, Pollard out-performed him.

In today’s loss, Elliott took his nine carries for 32 yards and caught all six passes for 36 yards. On seven carries and two targets, Pollard put up 70 yards.

While Elliott is the bigger back and certainly the much bigger name, Pollard has been the better Dallas runner. And this isn’t just a 2021 thing.

Pollard has outperformed Elliott in many critical rushing & receiving metrics in each of the last two years:

And Pollard’s only getting better…

Start Tony Pollard if you need upside help at RB. He’s got a low floor but the talent is certainly there for you if the breaks fall your way. Next year, draft Pollard. Let others draft Ezekiel Elliott. At some point, the Cowboys will see what the data already tells us.