Four weeks into the NFL season, DFS grinders now have a significant data sample to examine ahead of each week. However, the NFL’s volatility reared it’s head in Week 4 with ten underdogs covering the spread and eight winning outright. This provided an ideal environment for contrarian thought, leading to Chris Godwin and Nick Chubb reaching the top of leaderboards with minuscule ownership. Advanced stats and metrics point to a few distinct edges we can exploit as we head into Week 6. Here are a few value plays and GPP targets for the DraftKings’ Week 5 Main Slate.

After a mediocre start to the year, Carson Wentz is a solid contrarian play in Week 5. Wentz currently averages 241 passing yards per game with a 65.7-percent (No. 32 among qualified quarterbacks) True Completion Percentage. However, playing the better part of two games without Alshon Jeffery, DeSean Jackson and Dallas Goedert completely shifted the balance of the Eagles’ offense. Wentz also throws the ball down field at a high rate, with 17 deep ball attempts influencing his completion percentage. He has also generated 1,321 (No. 7) yards of pass attempt distance.

Wentz and the Eagles draw a great matchup in the New York Jets. Prior to their Week 4 bye, the Jets presented one of the NFL’s most distinct pass funnels. They currently rank 28th with 286.7 passing yards allowed per game, but eighth overall with 88.7 rushing yards allowed per game. The Jets allowed at least 250 passing yards in each of their first three games, including 300-yard outings from Tom Brady and Baker Mayfield. With ownership likely to gravitate towards Deshaun Watson and Lamar Jackson, Wentz provides a solid GPP pivot for Week 5.

Fade Christian McCaffrey at your own risk, but Dalvin Cook remains another bellcow worth prioritizing on this slate. Coming off a down performance against Chicago, Cook still has at least 20 touches in every game this season. Minnesota’s 53-percent run rate ranks second in the NFL and Cook remains involved as a receiver, averaging 4.5 targets per game.

Minnesota enters this game favored by 5.5 points, suggesting a run-friendly game script. The Giants’ run defense ranks middle-of-the-pack, but Cook’s opportunity and efficiency remain the most important factors. He has produced six (No. 1) Breakaway Runs and 151 (No. 5) Yards Created, adding confidence to him as a Week 5 play. With ownership likely landing on McCaffrey, Cook provides leverage against the field in a solid matchup.

Playing as three point home favorites against the Arizona Cardinals, Week 5 is the time to fire up Joe Mixon. At first glance, most metrics point against using Mixon in DFS. Without three of their starting offensive linemen, Cincinnati currently averages a league-low 49.5 rushing yards per game. However, after a Week 1 injury scare, Mixon has at least 17 touches in each of the Bengals’ last two games. This includes receiving and red zone work, with 15 targets and 10 touches near the goal line. In comparison, Giovani Bernard has one red zone touch this season. 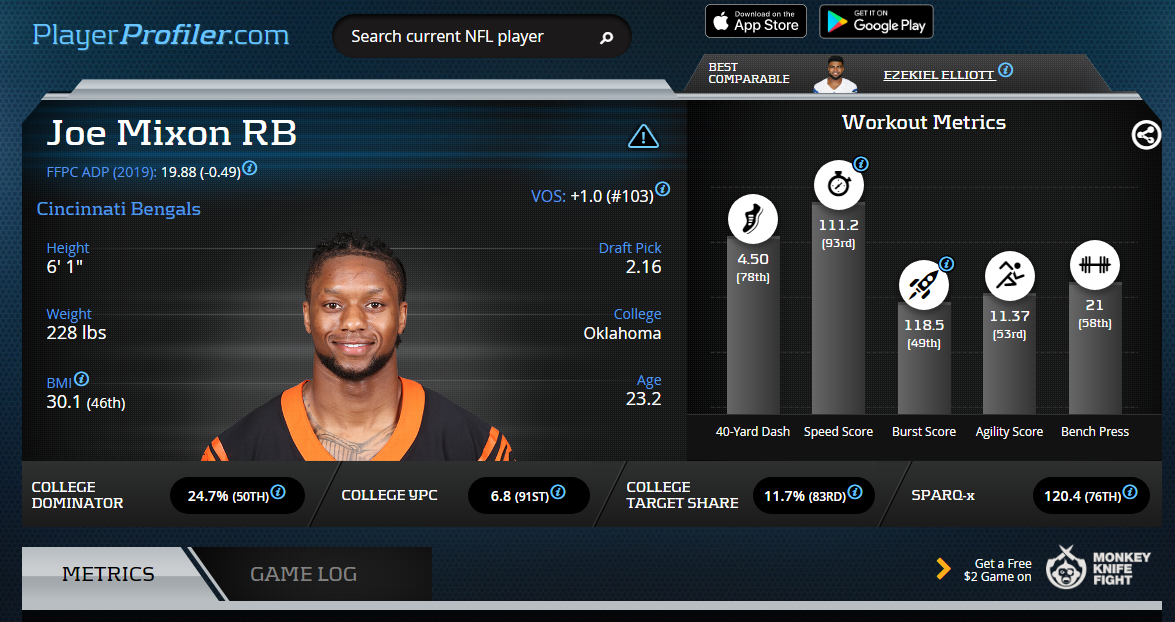 Looking at matchup, Cincinnati enters Week 5 as a rare favorite over the Cardinals. Arizona currently ranks 28th with 146.5 rushing yards allowed per game, making Mixon a solid play. Both teams play up-tempo football as well. Arizona ranks first in seconds per play, while Cincinnati ranks seventh. This uptempo play style raises the ceiling for all skill position players in this contest. Playing as a home favorite, against a struggling defense, Mixon remains a solid GPP target on this slate.

Still without a ceiling game, Josh Gordon enters the Week 5 main slate at $6,100. Since Antonio Brown‘s release, Gordon has 18 total targets and 153 Air Yards. The Patriots have also shown a willingness to move Gordon around the formation with a 10.9-percent snap share from the slot. Looking at efficiency metrics, Gordon’s 2.37 yards of Target Separation ranks third among qualified wide receivers. Despite the opportunity and strong efficiency, he remains without a 100-yard receiving performance.

Aside from volume, Gordon stands out with a strong projected matchup against Josh Norman. In his coverage, Norman has already allowed 19 catches for 247 yards and five touchdowns to open the year. This has culminated in a 138.6 (No. 73) Passer Rating Allowed in his coverage. Already 15.5-point favorites, Vegas projects New England to rack up points against a weak Washington defense. A strong pivot off Tyler Boyd, Gordon is a calculated target in GPPs this weekend.

Third in the NFL with 507 Air Yards, Marquise Brown continues to narrowly miss big games. On top of massive air yard totals, Brown has averaged 9.7 targets per game in his last three contests. Baltimore employed Brown as a full-time receiver in their last two games, giving him a Snap Share north of 80-percent in each. Notorious for his speed, Brown’s 12 Deep Targets are tied for the league lead, but also afford him 5.04 (No. 8) yards of Cushion. This creates easy throws for Lamar Jackson and the chance to rack up yards after the catch.

This week, Brown faces Pittsburgh in a game totaled at 44.5 points. He looks to benefit with Pittsburgh ranking bottom-eight in yards allowed to wide receivers this season. While Baltimore uses their rookie all over the formation, he projects to run most of his routes against Joe Haden. To open the year, Joe Haden allowed 13 catches for 150 receiving yards on 19 targets in his coverage. Commanding elite volume, Brown retains massive GPP-winning upside in this Ravens’ offense.

While Keke Coutee looks attractive at $3,400, Kenny Stills practicing on a limited basis to start the week has muddied Houston’s wide receiver situation. However Will Fuller, with his 100-percent Snap Share, remains affordably priced at $4,500. Fuller commands strong volume in this offense in averaging 6.7 targets per game, and has compiled 96 Completed Air Yards for Houston in his last three games. With only 14 catches and 183 yards to show for his opportunity this season, Fuller remains a strong buy low candidate on the Week 5 main slate.

While defending the pass well to start the year, last week Atlanta allowed Marcus Mariota to throw for 277 yards in their first game without Keanu Neal. Fuller also projects to see Isaiah Oliver on most of his routes. In the last two weeks, Oliver has allowed 11 catches on 15 targets for 133 yards and a score in his coverage. Fuller also presents a mismatch for Oliver with his 4.32 speed. Conversely, Oliver ran a 4.50 40-yard dash coming out of Colorado. Another cheap option for GPPs, Fuller presents a ceiling worth targeting in Week 5.

Priced at $4,500, Austin Hooper provides one of the largest floors at the tight end position in DFS. He has drawn 33 (No. 4) targets and ranks top 10 at the position in both Target Share and Hog Rate. This opportunity has also translated directly to the field, with his 28 receptions currently ranking second at the position.

Hooper remains a contrarian play of sorts, with a perceived tough matchup against the Houston Texans upcoming. However, Houston has faced only 19 tight end targets all season. With Greg Olsen the only tight end of consequence to have faced the Texans so far, this matchup remains an unknown. A bet on Hooper in this spot remains a bet on volume. With Houston favored by five points at home, Atlanta projects to continue their pass happy ways.