Why Deshaun Watson Bounces Back: Lock Button Plays for Week 5 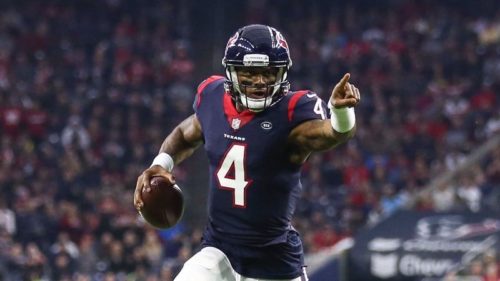 Week 4 was a mixed bag. We whiffed on Russell Wilson, Evan Engram and Tyler Lockett. Marlon Mack was nearly game-scripted away before being injured in the fourth quarter. However, David Johnson was a pass-catching machine and Kerryon Johnson did everything but score a touchdown. Cooper Kupp was a massive smash with nine receptions, 121 yards and a score. T.J. Hockenson and Kenny Golladay combined for three touchdowns, while Chris Carson had a nice bounce-back performance with an RB13 finish. This week, we present 13 more lock-button players who are primed for success and should be in your Week 5 lineups based on usage, opportunity, matchups, advanced stats and metrics. Let’s assume PPR scoring with four points per passing touchdown.

Deshaun Watson has thrown for under 200 yards in two of his last three games, but this is the blowup week. The Falcons defense is near the bottom of the league in points against, and allowed Marcus Mariota to throw for three touchdowns last week. They have sacked the quarterback only five times in four games, so Watson should have more time in the pocket than he has had in recent weeks.

Watson was upset with his performance in Week 4 and will be motivated to play well in this home matchup. Watson is top-five in deep ball attempts and barely missed Will Fuller for a long touchdown against the Panthers. He leads all quarterbacks in rushing touchdowns, scoring on the ground in three of four games. Stack Watson with Fuller, Keke Coutee, and/or DeAndre Hopkins.

Leonard Fournette has produced 518 total yards without scoring a touchdown. Yet he is still averaging 16.4 (No. 11 among qualified running backs) fantasy points per game. A positive reversion to the mean is coming, so is this Fournette’s multi-score week?

The Panthers have surrendered the ninth most rushing yards and are tied for the 10th most rushing touchdowns allowed. Fournette has played on more than 95-percent of the snaps and is top 10 in both carries and targets. He leads the league with 230 Yards Created. His 29 rush attempts in Week 4 were the highest weekly total of any running back this season. The touch volume is there and the touchdowns are coming. Fournette is priced below $7,000 on both FanDuel and DraftKings, making him an easy lock play in Week 5.

The Titans told us all offseason that they were going to feed Derrick Henry early and often. Through four weeks, they have been true to their word. Henry ranks second in the NFL in rush attempts, averaging 19.5 per game. With those carries, he is eighth in rushing yards, fourth in evaded tackles, and No. 10 in Juke Rate. He is fourth in Yards Created and is averaging 17.4 (No. 9) fantasy points per game. That’s all despite facing stacked fronts at a higher rate (47.4-percent) than any other running back.

Starting left tackle Taylor Lewan returns from his four-game suspension this week, bolstering an already solid run-blocking unit. Game Script will likely be in Henry’s favor if the Bills are forced to lean on backup quarterback Matt Barkley. Tennessee fed Henry 27 times in Week 4 while playing with a double-digit lead for most of the day. Both DraftKings and FanDuel have him priced outside the top-10 RBs despite the appealing matchup.

Week 4 was the Chris Godwin show but Mike Evans did his share of damage too, with 89 yards and a score in the 55-40 shootout. Evans has 30 targets and four touchdowns over the last two weeks. He holds a share of the league lead with 12 deep targets, ranking second in both Completed Air Yards and Target Distance. He is averaging 20.4 (No. 7) yards per reception and holds a 26.1-percent (No. 10) Target Share. This week he gets the privilege of going against Saints cornerback Marshon Lattimore, the No. 54 player in PlayerProfiler’s cornerback rankings. He has allowed 262 total yards and 15.3 (No. 67) fantasy points per game. Lattimore’s -16.9 Coverage Rating ranks No. 63 among qualifying cornerbacks. While Godwin will be in a ton of DFS lineups, the move is to pivot back to Evans like we recommended before his blowup performance in Week 3.

This is a prime bounce-back spot for Tyler Boyd, who is coming off his worst performance of the season this past Monday night against the Steelers. The whole Bengals offense struggled to get anything going against the Pittsburgh defense. It will be much different in Week 4 against a Cardinals defense that has allowed nearly 30 points per game. Only the Dolphins have allowed more offensive yards and passing touchdowns.

With John Ross on injured reserve and A.J. Green still weeks away from a return, Boyd is the clear number one option in the passing game. That’s a passing game that was already targeting him at a rate of 23.6-percent before the Ross injury. Boyd’s 38 receptions and 27 targets rank fourth among qualified wide receivers. He has three games with at least 10 targets and six receptions. Lock him in for a high target volume week in what should be a shootout.

It’s outrageous that Austin Hooper is still so underrated. He is top-five among tight ends in targets, receptions, receiving yards, Completed Air Yards, yards after the catch, Target Distance and Target Separation. Not only is he seeing volume, he is as efficient as they come.

Hooper trails only Evan Engram in fantasy points per game and has scored at least 22 PPR points in each of the last two. He will continue to be a featured weapon in an offense that is projected to have one of the highest point totals of the weekend. He is priced at only $4,500 on DraftKings, so smash that lock button.

Lamar Jackson, QB, Ravens at Steelers: He ranks No. 1 in passing touchdowns and fantasy points per game. Oh, and he’s on pace for nearly 1,000 rushing yards. Lock him in as the QB1 with no Patrick Mahomes on the main slate.

David Johnson, RB, Cardinals at Bengals: Has seen 20 targets over the last two weeks, and next draws a Bengals defense that allowed 17 receptions to running backs in Week 4. That’s right, 17. In one game.

Joe Mixon, RB, Bengals vs Cardinals: Still managed 15 carries and five targets despite seeing negative game script in Week 4. Now faces a bad Cardinals defense that allows 146.5 rushing yards per game. The Bengals offense finally wakes up in this one.

Keenan Allen, WR, Chargers vs Broncos: The Chargers are running out of healthy pass-catchers and Allen is dominating. He leads in targets, receptions, receiving yards and Completed Air Yards.

Adam Thielen, WR, Vikings at Giants: The squeaky wheel gets the grease. Thielen called out his quarterback and coaching staff after another poor performance from the passing game. The Vikings will feed their star pass-catcher against one of the league’s worst secondaries.

Tyler Eifert, TE, vs Cardinals: If you haven’t figured it out by now, start all of your tight ends against the Cardinals.